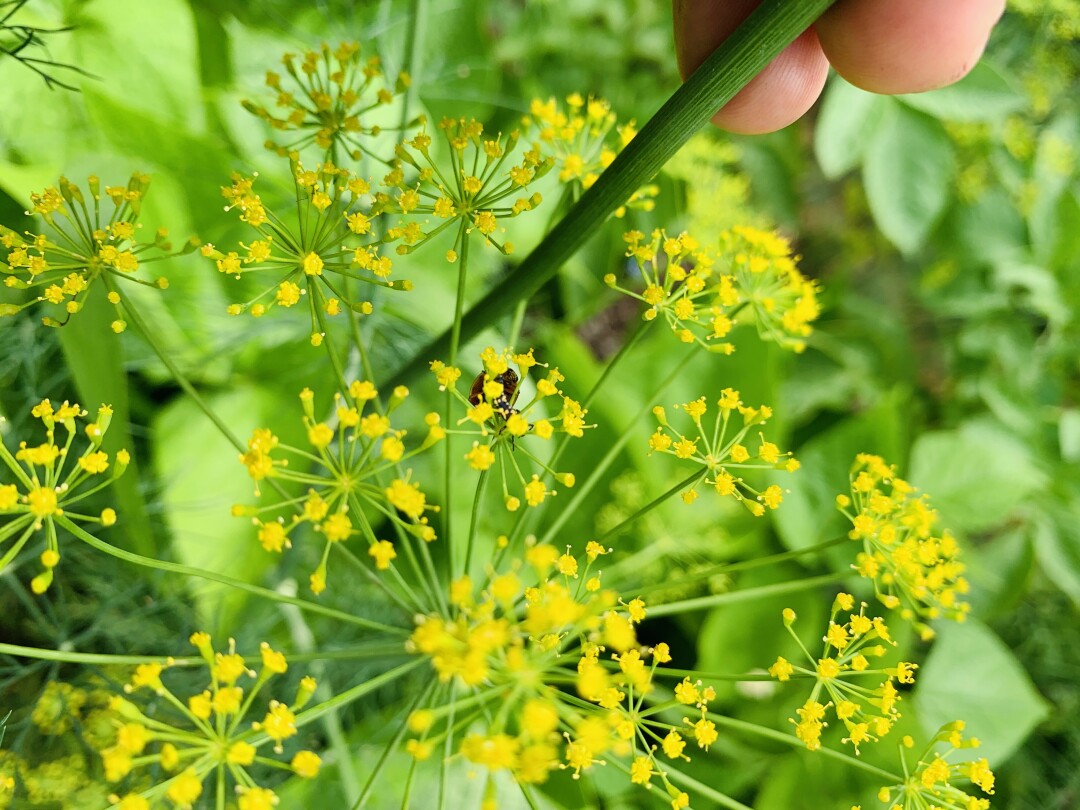 The golden flowers of Dan’s Dill brought a sense of connection through the pandemic. Photo by Kathryn Simpson.

Columnist’s Note: Kat is a writing major at Northland College who was recently my student in “WRI 273: Writing the Environmental Essay.” It was a joy to have her in class, and I’d like to share one of her essays with you this week, as we begin to plant our gardens. Enjoy! –Emily Stone

As I settled into my first summer working in the campus gardens and living along the south shore of Lake Superior, I was comforted by the discovery of a familiar object in the garden shed: a Smucker’s grape jelly jar with a purple lid, half-full of dill seed. I knew in an instant that this had been my grandfather’s. Every summer morning, he carries one of those jars while he strolls along his fence, dolloping jelly on the posts for the orioles, who hang a few feet back, waiting for their breakfast. The seeds the jar contained could only have come from his garden.

The migration of that jar from Durand, Wisconsin, all the way to the Northwoods of Ashland could be attributed to my brother, a former garden crew employee and my current boss. He approved of my decision to scatter the remaining seed all over the garden, much to the confusion, and even dismay, of my fellow gardeners. I gave orders that the dill was not to be pulled up, hoed, or disturbed, except where it choked out our other produce. The dill had to stay. And stay it did, enough to pop up again the following year, when I collected mature stalks by the bucketful, saving even more seed.

This spring, that same jelly jar sits full of seeds. I take a few out on occasion and rub them between my fingers. They’re thin, with rounded sides, and they come to a point on both ends. These flat, fragile seeds contain all the essentials for a life to begin. Somewhere, buried in their DNA, I know they hold the memory of a garden, tucked behind a house, not far from the Chippewa River.

I haven’t seen my grandfather in over a year. I’m glad he and I have been cautious about COVID, but it’s tough to stay in contact with him. He’s not one to chat on the phone very long. Usually, he calls with a specific question in mind, and when he’s past the formalities of checking how I’m doing, he’ll end the call abruptly with a, “Well, be good.” Click. He’d rather give someone a bucket of raspberries and a pound of ground beef than delve too far into his feelings. I can’t say I’m all that different.

Those dill seeds preserve my connection to him. Even though we’re separated by miles of woods, lakes, and farmland, our dill can remember each other. 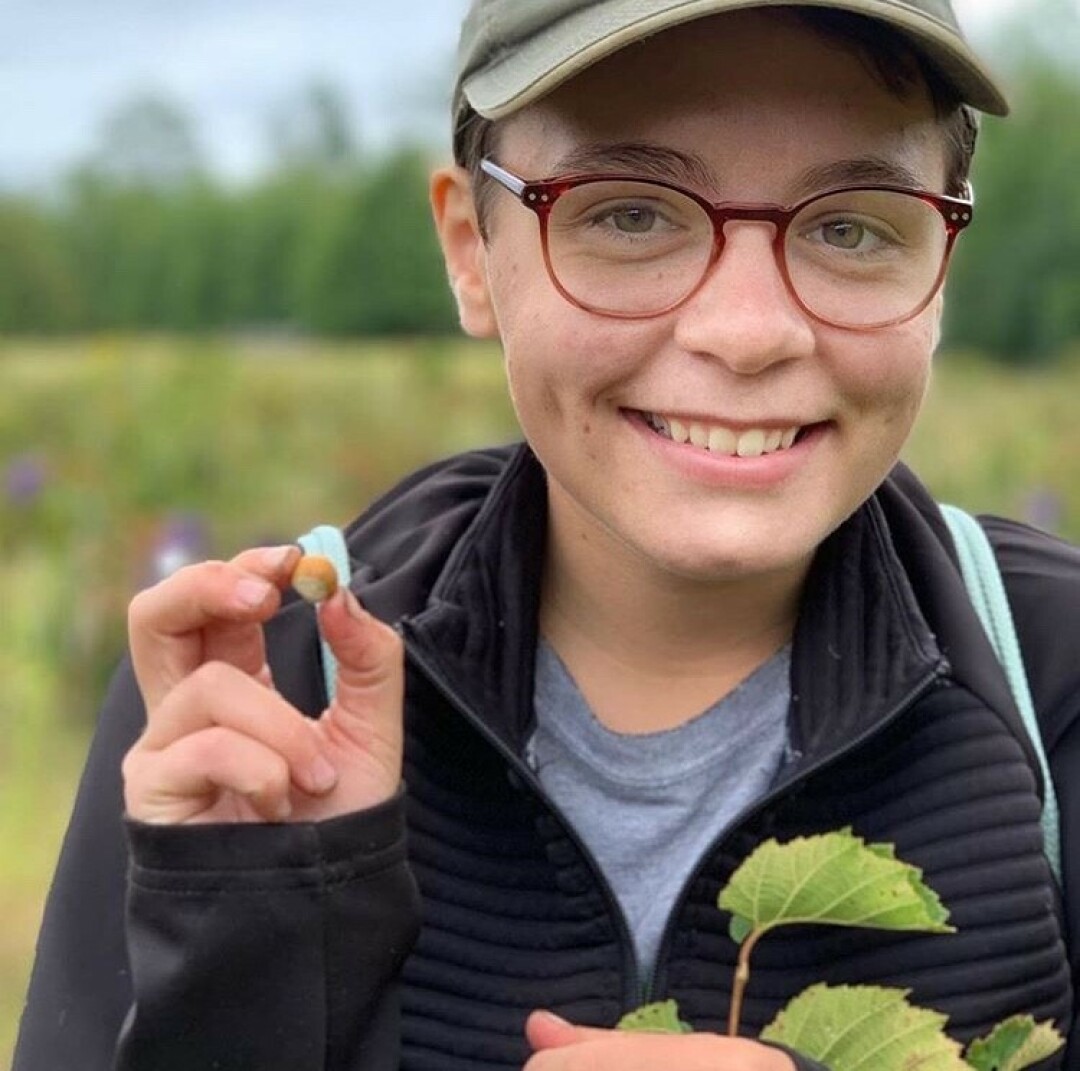 Kathryn Simpson poses with a hazelnut, one of the other crops grown in the Northland College gardens. Photo by Danny Simpson.

I think my hunger for connection was what drove me to scatter those seeds in the first place. How could I work the soil without the company of those familiar, pale-yellow blossoms, branching out like an upside-down umbrella and wafting their scent on the breeze?

On campus, we certainly don’t grow dill because it sells well. Only a few people appreciate its culinary uses. A woman with a southern drawl and a wallet full of two-dollar bills will eagerly seek out our young dill leaves at the farmer’s market, but most days it’ll slowly wilt in the sun, untouched until the end of market, when I try to hand it off for free.

Pickling season is a different story. Certain people come hungry for it then, buying it in bundles of mature stalks. But it only satisfies the few customers who desperately need it and is overlooked by everyone else. We harvest the leaves and stalks all the same, cleaning and recording how much was harvested, along with the other produce. The dill’s specific variety has been forgotten, so on the record sheet it’s listed as Dan’s Dill, after my grandfather.

My grandparents never used dill for much either, but I think they enjoyed the aroma. I still remember my grandma, sick and couch-ridden from chemotherapy, asking me to get her some dill from the garden. She seemed so happy to smell those small, yellow flowers, rolling the stalk between her fingers. She was too ill to go outside, but the dill could help her imagine the garden—what it would be like to stroll around it again, if only her lungs would cooperate.

After she asked for that first stem, I started bringing bouquets of blossoms to her more often, so she could enjoy the scent. Now that she’s gone, I think a lot about that little bit of dill—that small gift—a simple herb helping her cling to a shred of humanity while her body withered away.
When I finally leave Ashland, I’ll take that jelly jar with me, stuffed to the brim with fragrant seeds to scatter wherever I land next. I’ll keep bringing them with me, to every garden, every farm, every salvageable piece of land. And all along the way, they’ll have trace memories woven into their DNA, remembering a garden, tucked behind a house, not far from the Chippewa River.

For more than 50 years, the Cable Natural History Museum has served to connect you to the Northwoods. The Museum opens on May 15, 2021, with our Mysteries of the Night exhibit and in-person public programs. Connect with us on Facebook, Instagram, YouTube, and cablemuseum.org to keep track of our latest adventures in learning.