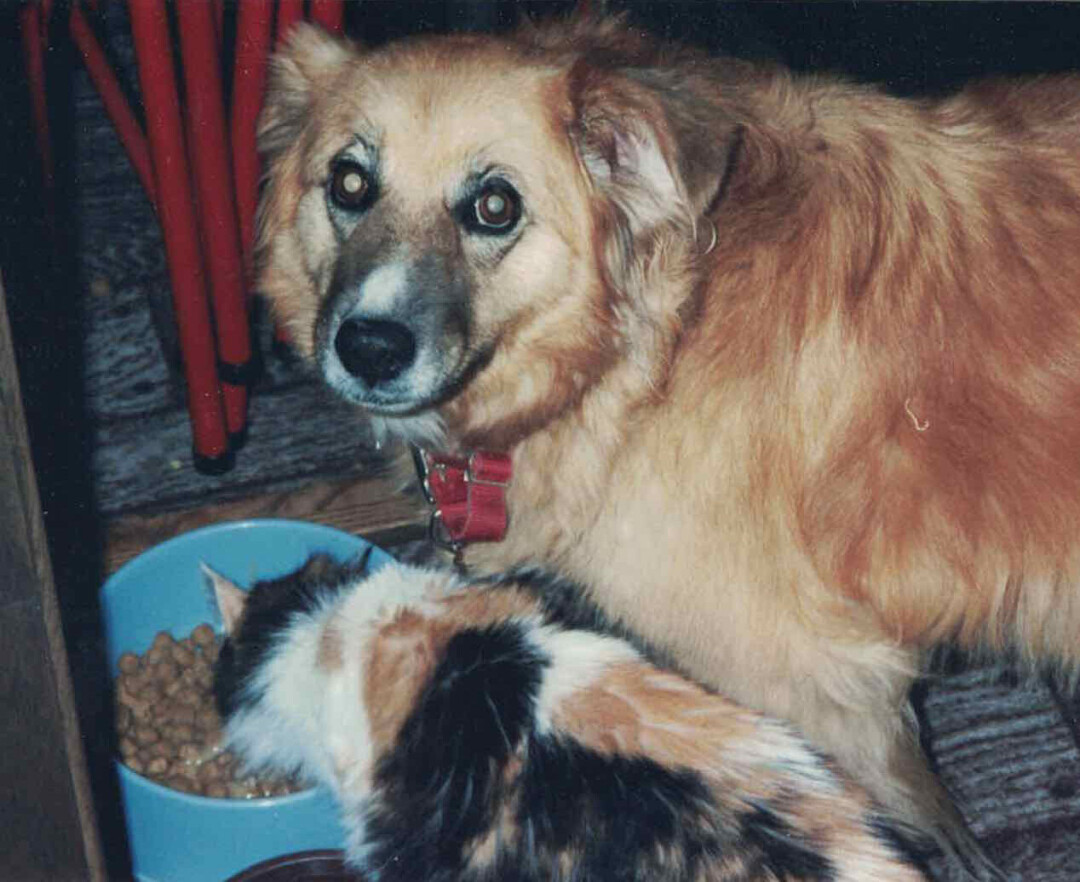 Ducky the long-suffering dog gets her food co-opted by Jessica the evil cat.

So Cloquet passed their chicken ordinance. I laugh. It is a bitter laugh, as I have to wonder where these people were when I was raising Leghorns in my basement.

I should begin with an explanation. I lived for 50 years with a woman who was addicted to bringing home random animals “for the kids.” Once she brought them in the house, her job was done and within a day or two, so were the kids. From then on, it was my job. The chickens, of course, began as those cute colored chicks that were allowed to be sold at Ben Franklin around Easter time. Within a very short time, white feathers began sprouting and the poop was piling up.

Luckily, they arrived before I could start on making the basement suitable for humans. Unfortunately, the chickens, while not as adept as pigeons, still were much better fliers than turkeys. (See WKRP in Cincinatti’s Turkey Day episode if you need to refresh your memory about turkeys.)

The kids lost all interest in chickens then, as long as they could hear them flapping around the basement. I brought them to my in-laws while they were in school and they noticed the silence right away. I explained that the chickens would be much happier out in the country, and I’m sure they were happier right up until Sunday dinner. We couldn’t visit the in-laws then for a month or two.

The guinea pigs were a rummage sale “find.” It happened when I was at work, so by the time I came home, it was fait accompli as the saying goes. Once the kids had seen them, I would be the designated monster if I refused to accept them. My wife assured me that since all three were females, there was no chance of any unwanted pregnancies. I hope you can spot the flaws in this line of thinking.

Before long, I was having to build one guinea pig box after another. I could never separate them fast enough — I think the sperm was delivered by osmosis. As soon as it was apparent that the bloom was off the rose, as far as the kids were concerned, I put my foot down firmly. Shortly after, my wife found a happy guinea pig recipient who couldn’t believe her luck. We did not provide her with our phone number, and hoped she was too happy to take down our address.

Now you would think, as I did, that this experience might dampen the animal collecting fever, but you would be wrong. I came home from work one Friday evening to find a skunk wandering around my living room. “WHY,” I shouted in the most reasonable tone possible, “WOULD YOU WANT TO BUY A SKUNK?”

“Well,“ she said, “I didn’t want the skunk. I was going to get the raccoon, but he learned how to turn on the faucet last night, and flooded their basement. So I thought I’d better take the skunk.”

What could be more reasonable than that? Of course, it would never occur to her to get neither. Once the decision was made that she was going to buy an animal, she had to buy one or feel like a failure.

Of course, along with these exotic pets, we had the usual complement of cats and dogs. Suzy, our first dog, was an extra-large Teri-poo, being half Bedlington Terrier and half Standard Poodle. Like her smaller relatives, she was a complete lover. When I took her for a drive, she would lay her head on my shoulder, so anyone following us would think I had picked up a floozy with curly black hair.

We weren’t sure how she would act when we brought our youngest home, so at first, we kept her away. We didn’t watch closely enough, and next thing we knew, she went up to him on the davenport and gave him a good lick. Then she laid down, satisfied that she had claimed him.

From then on she kept a close eye on him, especially if a stranger was holding him. And when the preacher went to pick him up, Suzy clipped him behind the knees and put him flat on his back. She would never even threaten to bite anyone, but she did know how to throw her weight around.

We had Suzy for 15 years, and we still miss her. We were without a dog for a while before we got Ducky,
Ducky belonged to our neighbor lady’s nephew. The nephew was mentally disturbed and I know Ducky had endured lots of verbal abuse, at the very least. Our son thought she suffered from depression.

In any case, she was totally obedient. My wife would put her on a leash and take her for a 3-mile walk. If she happened by a store she wanted to look through, she would drop the leash and tell her to stay. She stayed. Then my wife would take her up Spring Lake Road and let her go for a swim. Ducky loved the water. Come to think of it, that may be why she was named Ducky.

I was playing a little keyboard in the band at the time, and was playing “House of the Rising Sun” on a synthesizer with a rock organ sound. Suddenly, from behind me, I heard Ducky singing along. She was lying on the floor and really getting into it.

We found that she would sing along with us to “Happy Birthday,” so from then on, she accompanied us when we sang that song to our kids.

Ducky’s life would be ideal except for one thing: Jessica the calico cat. Jessica would not hiss at her — no overt antagonism at all. She just resorted to torment that was perversely evil. She would block Ducky from her dish while she ate the dog food.

We would be sitting in the living room and Ducky would come in and stare at us with those sad dog eyes of hers, and she would keep doing that until I followed her into the kitchen, where she showed me the cat eating her food.

There was absolutely no reason for the cat to be eating dog food. She had her own dish with good, expensive cat food, so this was pure feline orneriness. How could anyone fail to be moved by the torture in this dog’s eyes?