An addictive cooking contest from down under 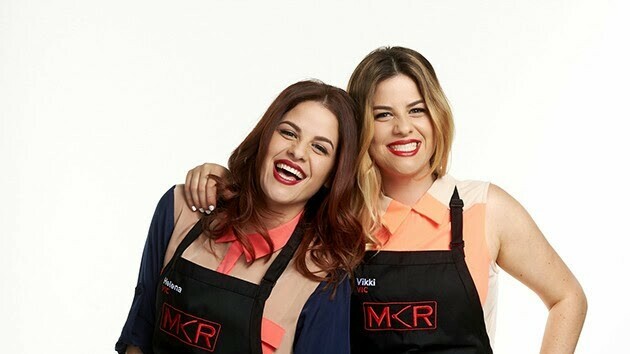 Twin sisters Helena and Vikki introduced themselves to their fellow Season 5 contestants as “two bodies, one brain – half a brain each.”

It started in 2010, when I was laid up for four months with a badly fractured leg.

I believe Chopped was first. Then Hell’s Kitchen. And then, well, let’s just say there was a disturbing flurry of cooking contest shows.

Yes, I am a cooking show addict.

I’m forgetting a bunch, but it doesn’t matter because none of them can hold a mandoline to my new favorite, an Australian cooking competition called My Kitchen Rules that’s available on Amazon Prime.

Yeah, no other cooking show comes close to the high drama and energy these Aussies exude. It’s like the Mad Max of cooking shows.

I might have kept this addiction secret had it not been for Season 4 of My Kitchen Rules, which took place in 2013. I’ve long maintained that a great piece of drama is only as good as the antagonist is bad.

The first two seasons of this show had a couple strange personalities and people with inflated egos, but it wasn’t until Season 3 that a team showed up that you could really hate.

In Season 3 the bad guys were a gay couple – one a lawyer the other a doctor – who had some very snobbish views on food and people. You watched each episode hoping they would have an epic fail, which they eventually do.

But then Season 4 came along with two of the most reprehensible contestants ever. Their fellow contestants and I refer to them as the Dragon Ladies, two Asian-Australian women who are very easy to despise.

While most of the cooking pairs on this show seem mostly like normal, down-to-earth folk you might meet anywhere in the world, the Dragon Ladies seem like ego-driven evil personified straight from hell.
These two young women have black hearts. Right from the start they believe they are superior to every other contestant.

That’s the great thing about this show, the personalities. You get to see them work under pressure and you begin rooting for teams, and as you get to know the Dragon Ladies better, you hope one of the other teams will take them down. Hard.

The concept for the show is simple – they find cooking pairs from every state in Australia (there are six of them – New South Wales, Queensland, South Australia, Tasmania, Victoria, and Western Australia; in Season 2 they include a couple from New Zealand, and in Season 5 there is a couple from Canberra, the capital of Australia in a territory known as the Australian Capital Territory).

The contest begins with each team creating an instant restaurant in their home and serving a three-course meal to be judged by fellow competitors and the two chef hosts, Pete Evans and Manu Fieldel.

From there the contestants face a series of challenges that include cooking for large groups of strangers who judge the cooking, to cooking for a panel of professional chefs under extreme time constraints.
Most of the participants seem like average folks. Some have bigger egos, but those egos are usually broken under the pressure of the competition, and better people emerge after they have failed on a recipe and eaten a big slab of humble pie.

But the Dragon Ladies – Ashlee and Sofia – will not admit failure even when they fail, which is not often enough. They are an incredibly lucky pair throughout the competition, winning advantages and rubbing it in with witchy, bitchy comments.

Sofia, in particular, constantly talks about how she loves power and wants the others to bow down before her. And it’s not just what she says but how she says it. Her mouth is filled with elaborate bracework that might contribute to her sounding like a mush mouth. Pair that with the way she absurdly stretches her rubbery lips while making her overenunciated rants, speaking as if addressing an idiot.

The Dragon Ladies are the worst example of self-centered egomaniacs who live in a creepy world of their own imagination. To see them taken down is a great moment in television.

But, as a practicing insomniac, I don’t have time to dwell on how sweet it was to see the failure of the Dragon Ladies because Season 5 is calling, and it quickly rolls into awkward territory with two pairs of your women who immediately take a disliking to each other.

One pair is well traveled and won’t shut up about it – one of them dominates dinner conversations by talking about all the exotic foods she’s eaten while visiting “over 42 countries.”
Over 42 countries?

Of course, ultimately, it does not matter. She and her partner seem unaware that their idea of breaking the ice at the dinner table amounts to self-centered promotion of their taste and style.

Their superiority is apparent in their observation about tacky (or in Aussie, “naff”) decorations at one instant restaurant. While not anywhere near as nasty as the Dragon Ladies, this pair, one of whom also overenunciates and has a rubbery mouth, while the other has a mouth shaped just like Batman’s arch nemesis The Joker.

The other pair are twins of Greek heritage who like to wear their lipstick thick.

I have a long history with twins, so quickly find myself rooting for these two, but not just because they are twinnnies. They are a couple of wacky, goofy girls who know their way around a kitchen.
Their fellow contestants refer to them as airy-fairy and ditzy, but when it comes time for the twins to cook, they tie for the highest score ever given in the series and cause everyone to re-evaluate them.

The sisters certainly gave their fellow contestants the ammunition to consider them ditzy when they declared they were going to win because they were two bodies with one brain, and then adding, half a brain each.

You get their meaning, but it does make them sound a bit vacant in the brain pan. Or is that strategy showing?

I have to believe in this case they were not strategizing to make themselves sound dumb. They’re just naturally goofy. I look forward to seeing how they do.

If you jump into this series, know that you have to get used to hearing Australianisms such as prawn for shrimp, capiscum for red peppers and the constant use of the word “farout.” Not having heard it used here in decades, I had to look it up when I heard Aussies using it so frequently, but apparently it means the same thing there as it once meant here – an expression of amazement or enthusiasm.

The series came to and end last year after 11 seasons. Not sure if it had anything to do with co-host Pete Evans becoming involved in the anti-vaccination movement and COVID conspiracy theorists. I was sorry to hear that because together he and Manu are solid foundational rocks of kitchen wisdom, sprinkled with ample amounts of humanity and the ability to connect emotionally with others. They put these people through tremendous challenges, and then help them through with encouraging words. They come across as two fine gents, so it’s too bad to hear about Pete’s troubles.

There has been talk that the series could be revived, but Pete might be too hot for the show now. But, I’m not even halfway through and there are 40-some episodes to each season, so I’m farout for a while.