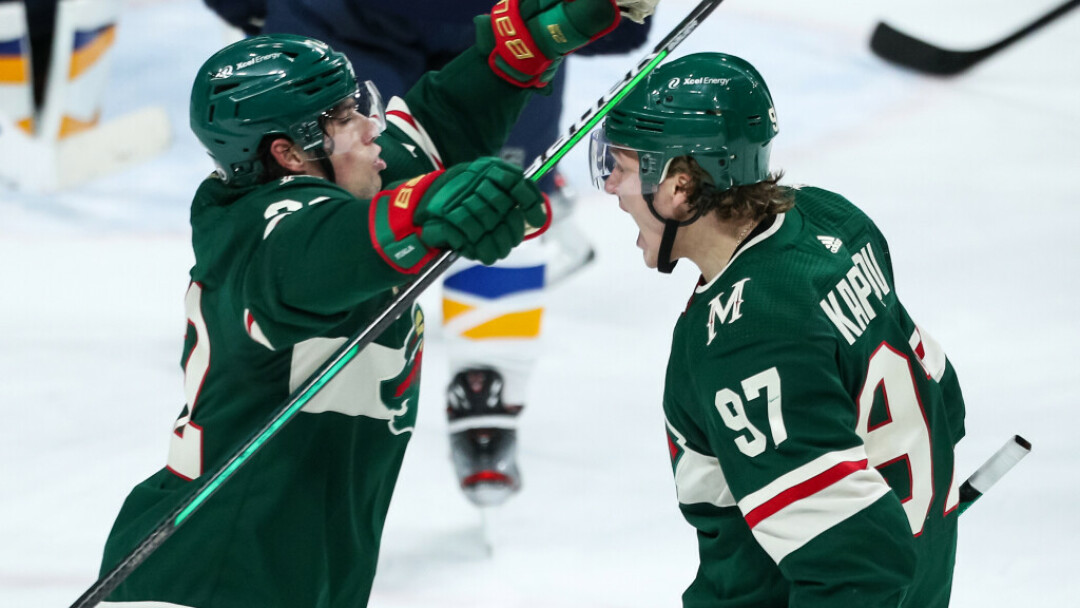 Kevin Fiala gets the OT winner versus STL in a 4-3 win.

What a week. The very desperate STL Blues arrived in St. Paul last Tuesday for a three-game set with the WILD and needing to put some distance between them and the Arizona Coyotes in the W-L column.

The Yotes have been nip and tuck with the Blues in the battle for the fourth and final playoff spot in the Honda West.

After Saturday evening’s competition, with the WILD beating the Blues in OT 4-3 and the Yotes losing to the VGK in OT 3-2, the Blues still hold a 3 point lead on the Yotes and also have three games in hand over them. Advantage Blues.

The Yotes do have four very winnable games left, though, but would have to “win out” and hope the Blues game suddenly falls off the earth.

That’s unlikely, and it looks like the Blues will get the four spot for the playoffs. They cannot catch the WILD from their position behind them in the standings and will finish the regular season against them with two tilts in STL on the 12th and 13th.

Oddly enough, the Yotes have had the Blues number this season going 5-2-0-1 against them. Go figure.
If the Wild had not pulled tonight’s game out with STL, they would stand 1-3-0-2 with them or 1-5.

And some of the details of the losses are maddening at a bare minimum.

Without knowing if the team has “solved” their inability to beat STL, I have to say that a VGK or COL playoff series is more favorable for the WILD at this point. As it is, the WILD and STL could not meet until the 2nd round of divisional play.

The two games at the end of the season are going to be telling. My inner thoughts are that the Wild could win a series against the Blues, but it would be challenging, and it would likely go six or seven games. The Blues have been a hard matchup for the WILD for several years running now. That does not seem to have changed.

Or, are the Wild currently going through a bit of malaise after locking down a playoff position? Would the winner have much left for a 3rd series?

That’s hard to say, and indeed the playoffs are an entirely different beast. Despite the WILD W-L record against the Blues, most of the games have been tight, hard-fought tilts. But if I’m honest, the Blues have had some edges here and there.

I’m somewhat reluctant to call it the “championship pedigree” that the WILD don’t have, but I’m at a loss as to what else to call it. It’s a combination of all of those little things that a team or some of its players can do that put them over that other clubs probably don’t have.

For instance, Kirill Kaprizov and Kevin Fiala are splendid players. But if you put the Blues Ryan O’Reilly on the WILD roster, he is automatically their best player. When he is totally on top of his game, he is the one that makes that team go. And he has a Stanley Cup ring and a Conn Smythe trophy to prove it.

I used to wonder why he has bounced around a little as a player, but it’s not because of his play. This guy has game.

Where to from here for the WILD? They are down to their final six regular-season games, two with the VGK, two versus the Anaheim Ducks, and then the last two against the Blues in the Gateway City. I feel that the club could go 4-2 here.

Moving from third place up into second and a home-ice position seems dependent on what the Avs do at this point. And they are beginning to gel again after getting players back from injury and off the COVID protocol list.

The Avs schedule is more favorable than the WILD schedule is. Of their seven remaining games, they have two vs. the SJS, four against the LAK, and one versus the VGK. I could see them easily going 6-1 or 5-2 at the worst.

If Vegas continues to win, this means the standings could hold as they are currently and that the WILD would face the Avs in Round one without the advantage of home ice.

That’s a tall order, but not an impossible one. The Avs have a fast team and can transition very quickly.

One mistake I see teams make against them time after time is to allow them to wind it up from their zone and allow them full-speed zone entries.

Their All-star forward Nathan McKinnon is the most dangerous at this. Disrupting their breakout between their blueline and the redline is an absolute necessity at having success against them.

Part of that requires a keen sense of anticipation. You will increase your chances against them if you can do that one little thing consistently.

They will be a difficult challenge no matter what. But if the WILD can stifle their top-six forwards a bit, I believe they have a deeper roster that could present problems for the Avs to contend with.
A WILD-Avs matchup has the potential to be an outstanding Stanley Cup series, and there is no reason the WILD couldn’t prevail.

Would it be a walk in the park? Not a snowball’s chance in hades. But with solid team defense and some timely scoring with some third and fourth line heroes emerging, yes, the WILD could advance from Round one.

I can’t wait for this one!

IT APPEARS that the WEST will have the VGK, COL, MIN, and STL as its playoff entrants.  In the CENTRAL, look for CAR, FLA, TAMPA, and NASH to get in. In the EAST, it will be PITT, WAS, the NYI, and BOS, with their order of finish still up in the air, and then in the NORTH (which should have been named the ALL-CANADA division), you will see TOR, EDM, WIN and MON.

It appears unlikely any other team can disrupt those four at this point.

NEXT WEEK I’ll offer up some thoughts as to how this year’s tournament could unfold and just who might make it to the promised land of Cup glory.

Of course, after watching the Kentucky Derby yesterday, I know how futile the prediction game can be, so I won’t be going overboard, just some thoughts on the potential for some teams. Until then... PEACE