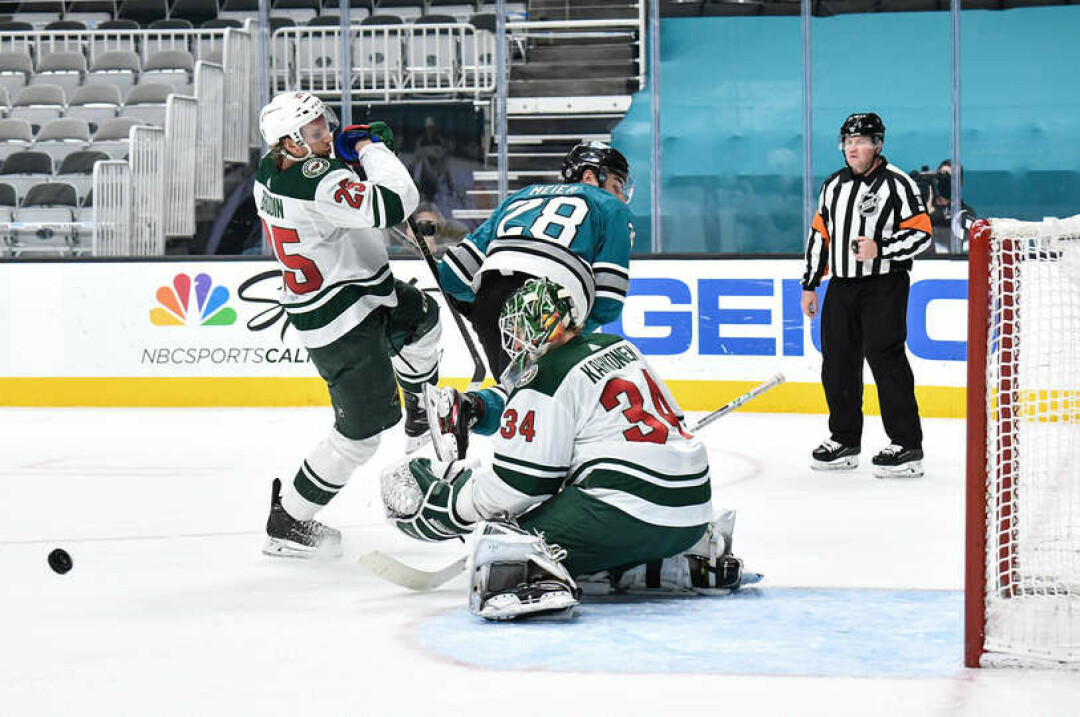 FINLAND – The Minnesota WILD has just concluded a four-game road trip with a 6-3 win at San Jose. They went 4-0 on the trip and have become the third team in the West Division and entire NHL to secure a playoff spot in the upcoming Stanley Cup tournament.

All three clubs getting playoff spots this week have come from the West Division. (COL, the VGK, and MIN) The team won twice at ARI, at the LAK, and in San Jose.

I have to say that in observing this evening’s tilt, the puck possession, puck control game of the WILD was as crisp as I’ve seen this year. (or ever) In the first and second periods, they appeared to be very strong in the possession game.

As seems to be the case in most games this season, they eventually ended up getting outshot. But not to worry, it’s all in the finish. The WILD could, and the Sharks couldn’t.

Even with a three-goal third period, they couldn’t get any closer than within two goals. At 5-3 and late in the 3rd, the SJS Coach, Bob Boughner, with two minutes left and a prime opportunity to pull netminder Josef Korenar, did not. Even to the consternation of the TV broadcasters, he didn’t call him to the bench.

With the WILD having ENG’s in the previous three games, the speculation was that it was probably a good call. When he finally was pulled at the 30-second marker, the WILD’s Nick Bonino scored seconds later.

But it was already too late for the Sharks. They were outplayed and outclassed in the first two periods.

And the WILD tightened up again after the Sharks put up three tallies. The two teams put on an entertaining game. You wouldn’t know it by the post-game celebration, but this win got the team into the Stanley Cup tourney, and I’ll have more on that soon.

In most of the pregame and post-game commentary, the common theme was in the team building for the playoffs with their consistency. I would echo those thoughts.

This evening, for example, the club dominated the first two periods and entered the final period with a 4-0 lead. The team and rookie netminder, Kaapo Kähkönen, gave up 3 Shark tallies in less than 5 minutes early on. It isn’t the first time I’ve seen this occur this season with the WILD.

I recall wondering through the first two periods if Kaapo could pull a shutout on this night. I was a bit skeptical, especially if the team “reverted to form” a bit. But, four games in six nights, and the tail end of a roadie, and I wasn’t surprised.

The boys tightened it up after that spurt by the Sharks and would protect the win and two points. The team is finally getting some upper-level hockey media attention, and the days of sneaking in under the radar may be coming to an end.

Still, I’m left to consider how they will do in the tourney itself.

Most of this same media, while praising the WILD, don’t view them in the elite level of three or four clubs that they’ve proclaimed are. By and large, they state that lofty status is reserved for COL, the VGK, CAR, and BOS.

OK, I get it. The boys from The State of Hockey are still dogged a bit by their past, which is fair.

However, this club has a new regime at the top and a revamped roster to go with a new attitude and culture. The same old is no longer acceptable, and that’s refreshing. It’s about time.

As far as how the club compares to the alleged “elites” of the league, I feel they are right in there.

Consider this: after the team’s COVID stoppage in early February, they have posted a 25-11 record. A quick analysis by myself shows this to be the best or 2nd best W-L record in the league in that period. In the division considered by most to be the best in the league this season, that’s an accomplishment.

I must note that a portion of the record has been achieved by beating teams beneath them in the standings. But considering league parity, it’s still respectable. If they had lost to these teams consistently, the fanbase would be all over them.

With COL and the VGK  considered as two of the Cup favorites, how do the WILD compare?

The team stands at 3-5 versus the Avs and is 4-1-0-1 against the VGK, with two games remaining with the Knights. Both tilts will be in St. Paul. The club split a series with COL in St. Paul early in the year.

They lost a solo game in Denver right before the COVID break. They won out in Denver late in the month.

Then there was the ill-fated trip west later in March that featured two butt kickings, and then the split in St. Paul with a dominating win by the WILD in the 2nd game.

The club didn’t face the VGK until early March and dropped two tilts to them.

In their other two games that month, the WILD prevailed in St. Paul. Earlier this month, the team swept two games out in Sin City.

In Vegas, many WILD fans either live there now or make the trek out there. When the team scores at the T-mobile arena, you can hear a fair volume of cheers rising from the crowd. The team has definitely noticed that.

Obviously, with the team having got into the Cup picture now, how will they approach the remaining nine games?

Vegas is currently in first place, with a four-point lead over the Avs and a five-point lead on the WILD.
The VGK and the WILD each have nine games remaining, with COL holding two games in hand against both.

In a post-game interview tonight, Captain Jared Spurgeon said the team will not be letting up and will approach each game with winning in the forefront and building consistency as a team goal as well. They will make every effort to move up and obtain a home ice position.

The oddsmakers won’t be with the WILD either way. They can move up at this point and can’t move down.

Considering all of these scenarios has my stomach as uneasy as if it were 5 minutes before game time!
Let’s GO! PEACE