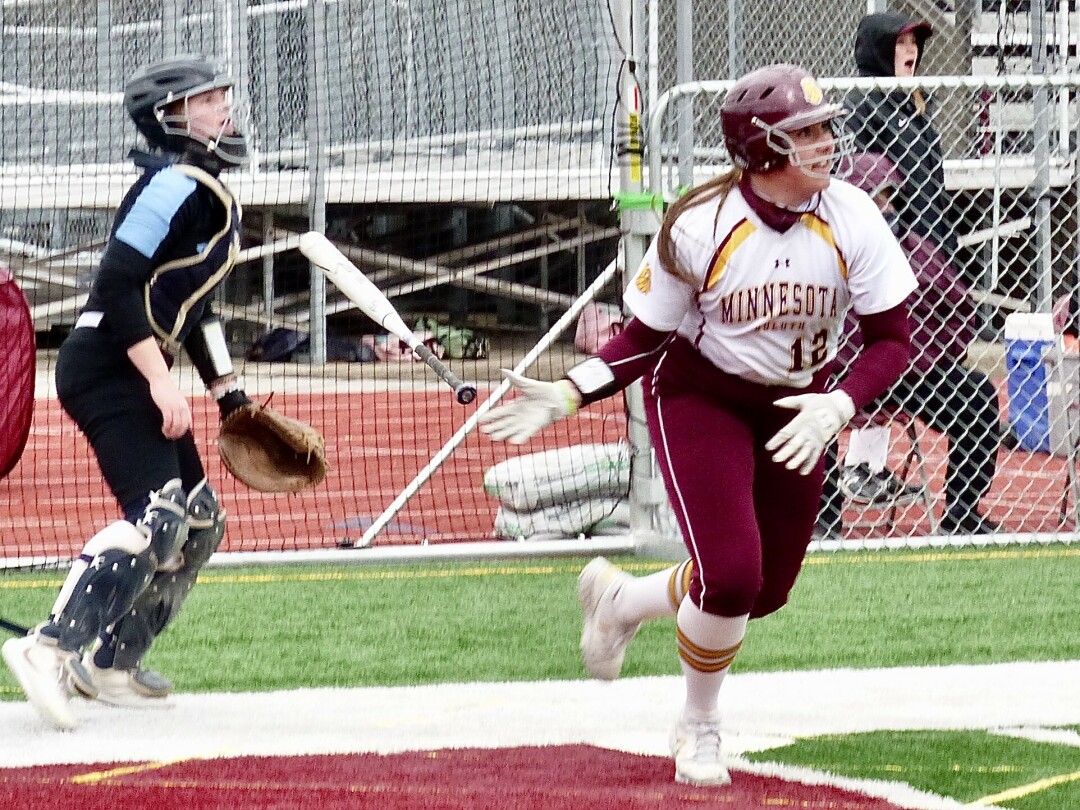 UMD’s Jordyn Thomas was not alone watching her grand slam sail out of the Malosky Stadium softball field and reach the visiting football bleachers beyond center field. At right, her UMD teammates rushed to home plate to greet Thomas after her eighth home run this season led to a 13-2, 8-0 sweep against Upper Iowa. Photos by John Gilbert.

The Minnesota Wild has surprised everybody – including themselves, perhaps – by clinching a spot in the NHL Stanley Cup Playoffs when they defeated the San Jose Sharks 6-3 last Saturday.

The surprise isn’t that the Wild reached the playoffs, but how they’ve done it, and how they avoided the last-week-of-the-season drama to sneak past a couple of challengers.

The Wild’s victory Saturday mean they took on St. Louis Wednesday night with the momentum of a seven-game winning streak, and became the third team in the NHL to clinch a playoff spot in only 47 games of the 56-game pandemic-limited schedule.

The three teams that have secured playoff spots are Vegas, Colorado, and the Wild – the top three teams in the West Division.

With the Twins looking a lot like a group of athletes who should just be starting spring training, and free-falling out of contention in the American League’s Central Division, and tied with last-place Detroit for the fewest victories of the season (7) going into this week, we are indeed fortunate to have the area college men’s and women’s teams playing so well as a support-attraction for the NHL’s Minnesota Wild.

Everyone in the league is aware of Russian rookie Kirill Kaprizov, who leads the Wild with 22 goals, including six goals on his current five-game goal-scoring streak, and in spectacular plays with about a dozen per game, if you count the subtle little moves.

And Kevin Fiala, who snoozed through the first month of the season, has caught fire and is up to 17 goals while the secret to the success of the Wild offense is that everybody is contributing.

All four lines take their turn putting goals on the board, and the defense also is contributing, led by Matt Dumba and Jared Spurgeon, while the entire corps covering foes in front and moving the puck out of the zone efficiently. 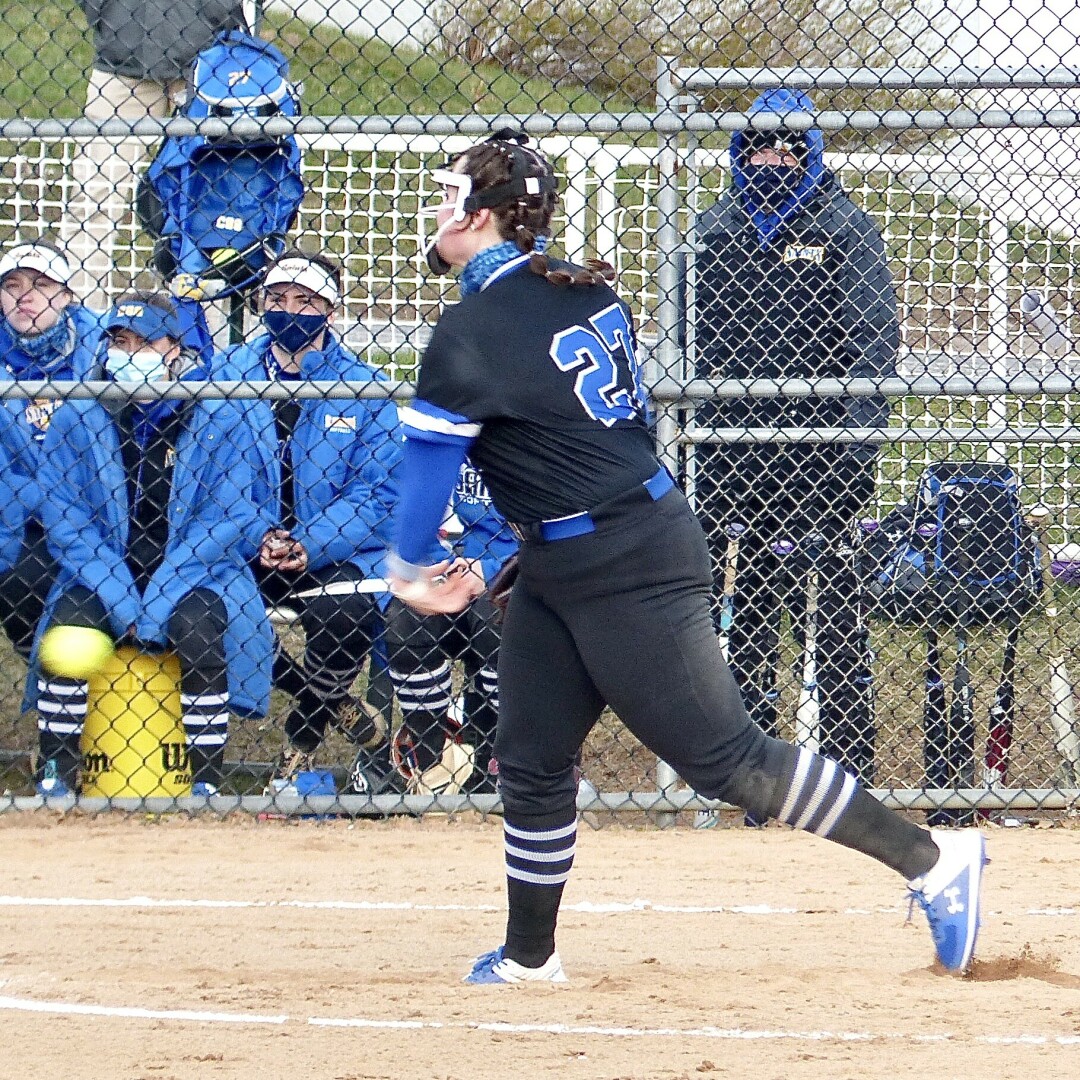 Olivia Howe struck out nine in a five-inning two-hitter as St. Scholastica defeated Martin Luther 8-0 to complete a sweep.

Then there is the goal-tending.

I was disappointed when general manager Bill Guerin didn’t trust Devan Dubnyk and Alex Stalock to carry the goaltending load, with Kaapo Kahkonen No. 3.

Guerin acquired Cam Talbot from Calgary and give Kahkonen a chance at the major league level, and the pair have been fantastic.

Talbot came down with COVID-19 issues, and Kahkonen had to play every game early in the season, but he won nine straight games to hold the fort, and nows stands 14-7 and Talbot has reasserted himself by going on a 6-0-1 hot streak, giving the Wild the best goaltending tandem in the NHL.

There’s still a long way to go, but the Wild’s team chemistry seems to be building by the game, and they have not lost more than two in a row all season, but it has won at least five in a row three different times.

The big challenge down the stretch is that the Wild will have to overcome a tougher part of the schedule, with St. Louis awakening after a half-season slumber. But coach Dean Evason has juggled lines and defensive pairings like a magician, and everyone seems to have bought in on his team-unity concept.

The UMD softball team has had its annual issue getting onto its own field, and continues to have to play on a makeshift layout on the artificial turf of Malosky Stadium, but they don’t seem to mind.

Coach Jen Walters has gotten steady if unspectacular pitching, and that may be enough with the offense the Bulldogs can put together. Last weekend the Bulldogs swept Upper Iowa in a doubleheader 13-2 and 8-0.
It was one of those blustery days that pass for spring in Duluth, but the Bulldogs showed off their offense with three home runs in the five-inning first game.

The big one was in the second inning. Already leading 3-0, the Bulldogs loaded the bases and up strode Jordyn Thomas, the left-handed hitting first baseman from Hermantown. She may have been annoyed when a couple of marginal pitches were called strikes, leading to 3-2 count, but when she swung at the next pitch, the sound reverberated with a special thwack, and the ball cleared the center-field fence and landed in the visiting football team’s bleachers for a grand slam.

It was her eighth home run of the season. Kelly Swank hit two home runs in the sweep and Emma Frost brought her teammates off the bench with her first.

UMD lost 8-3 to visiting Winona State Sunday morning, but rebounded to win 4-2 in the second game of that chilly doubleheader.

Meanwhile, over at St. Scholastica, where the Kenwood Field is in perfect shape, the Saints were extending the school’s dominance by blasting Martin Luther on Senior Day, 12-5 and 8-0. 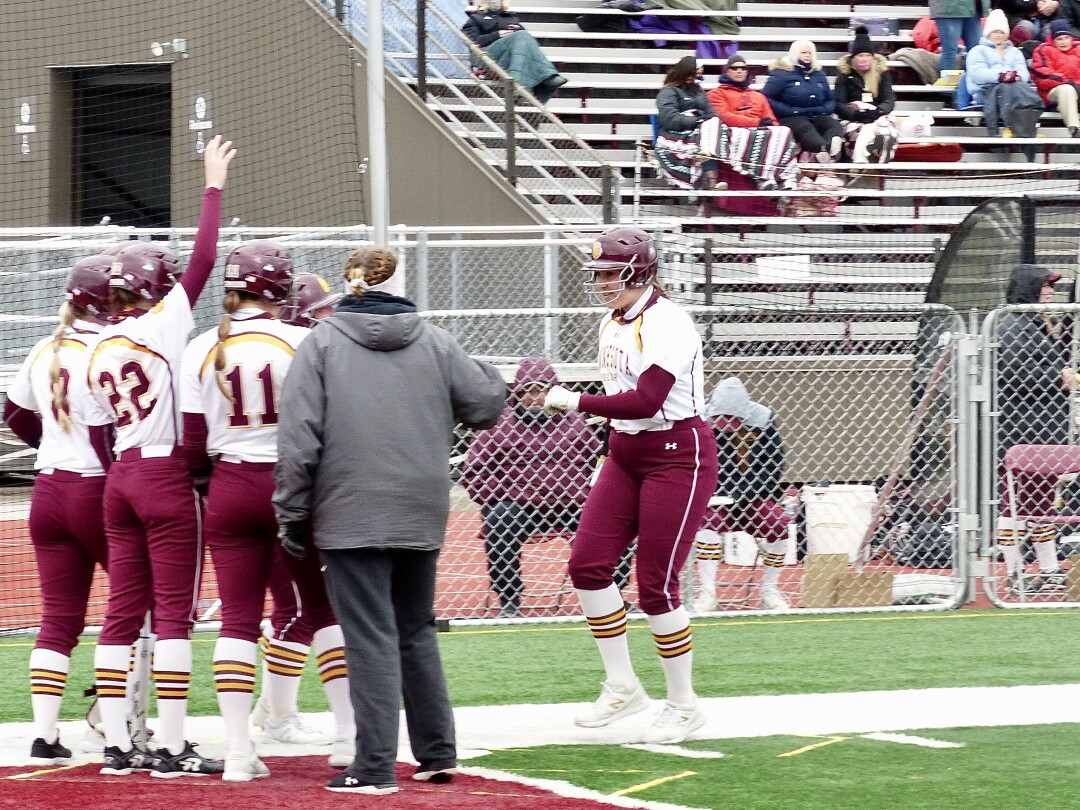 The good news was that UMD catcher Trevor Gustafson used this swing to smack a Mary pitch over the wall; the bad news was that was the only run of a 14-1 loss in the nonconference split.

Aislind Dail hit a 2-run homer and stretched her on-base streak to 13 straight games. Haley Rosenthal improved her pitching record to 13-2 in the first game, and Olivia Howe is up to 14-1 with the second-game shutout.

The Saints are 10-0 in their last season as part of the Upper Midwest Athletic Conference, and 27-3 overall. And they took a 15-game winning streak into this week, after breaking into the national Division III rankings at No. 19 last week.

If the rest of the UMAC probably won’t be hosting a going-away party for the Saints, as they move to the MIAC next year in all sports, consider the St. Scholastica tennis team.

Elliot Schneider, a former Duluth East star, improved to 9-0 at No. 1 singles, and also plays no. 1 doubles, leading the Saints past Northwestern of Roseville 7-2 last weekend.

The Eagles are no slouches, at 16-3 overall and now 3-1 in the UMAC – but St. Scholastica, 8-3 overall, is 6-0 atop the UMAC and hasn’t lost a conference regular-season match since 1998. The Saints have won 172 consecutive team matches, and this is their 24th consecutive UMAC season championship.

The late start that is a tradition among Northland high schools in spring sports is made worse this year by pandemic closures, but the regional baseball and softball competition is even more predictable because of it.

Consider that Esko had won only two games going into last week’s game at Duluth East, but both of them were by lopsided scores, against Virginia and Eveleth. The Eskomos beat Duluth East 10-3, after the teams struggled for control – the first seven runs of the game were scored on wild pitches or passed balls.

Meanwhile, Marshall beat Denfeld 4-3 last week, and Hermantown topped the Hunters 10-9, and the Hunters were looking for a bounce back against East at Wade Stadium. But East rebounded to hand Denfeld an 8-4 licking.

On Monday of this week, St. Scholastica extended its streak to 19 straight victories by traveling to the Twin Cities and crushing North Central 13-0 and 20-2, setting a few records in the process. Rosenthal struck out 12 in a 5-inning 3-hitter in the first game to improve to 14-2, and Howe struck out 9 and improved to 15-1 in the second game when she also went 4-for-4 at the plate with seven RBIs and three home runs— tying the CSS single-game home run record set in 2007 by current coach Rilee Dawson.

The Saints hit is home runs and five triples in the sweep and hiked their record to 12-0 UMAC and 29-3 overall.

Cloquet appears to be the class of area softball, with two huge victories last week, first knocking off Grand Rapids 3-2, and then stifling Hermantown 5-1 in action at Braun Park in Cloquet.