Raging bull or full of bull? 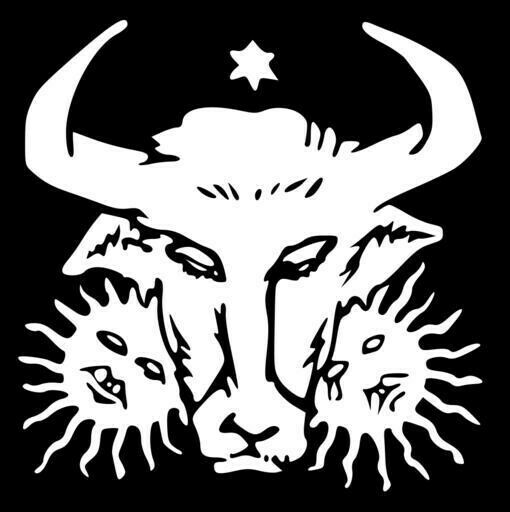 TAURUS
April 20-May 19
Element: Earth. Taurus Earth is much like a swamp filled with ancient trees covered in moss. Trying to navigate through this is like a dream in which you try to walk, but get nowhere.
Quality: Fixed. Taureans are the original immovable objects.
Symbol: The Bull. Seriously…this is too easy. Bullish, Bullheaded. Raging Bull. Full of Bull.
Ruler: Venus, the Goddess of lust, jealousy and perversion.
Role Model: Scrooge
Dream Job: Hanging judge.
Key Phrase: “Why do you make me hit you?”
Body Part: The throat – usually sore from bellowing.
Taurus, second sign of the zodiac, resides in the House of Money and Possessions. Traditional astrology kindly describes this Fixed-Earth sign as a steadfast, discriminating, thrifty homebody who is a great cook.
Your real-life version more closely resembles a stubborn, judgmental, boring miser with a weight problem.
Piss off a Taurus and watch the transformation from a peaceful buffoon quietly chewing on a peace of sweet grass to a Raging Bull. With practice, you will be able to spot an imminent charge. His or her face dark-ens visibly as the temper rises. The eyes veil, the jaw juts, or sets, ever so slightly.

Some Taureans lower their head a bit and look up at you as a real bull does before it charges. Depending on how self-controlled your Taurus is, you have from one second to a few minutes to brace yourself.
Venus rules Taurus and that ancient bad girl gives this sign an insatiable appetite. These Bulls can never get enough approval, possessions, food, rest or sex.
Bulls rely on emotions not intellect – instinct rather than fact. They are extremely judgmental, and can’t see another person’s point-of-view. All reason and logic go out the window when the Bull is pissed.
This is the first of the Earth signs; as a result, Taureans are deeply practical and realistic.
In other words, no fun at all.
The Taurus male is patient, prudent, persevering, a tower of strength on whom you can lean. You will fall for his shy charm and those big, sad eyes. His needs are simple: home and hearth, a good woman, and a nest egg for that rainy day.
He may offer comfort, but what you will probably get is an army-boot mentality. Either you do things his way, or you do your thing alone.
He actually won’t mind your independence, if it benefits him in some way, and as long as dinner is ready when he appears.
Don’t expect to be showered with praise and lavish attention. Do expect to be cast in the role of the little woman.
Of all the men in the Universe, this one expects the 1950s textbook version. He will buy your clothes, pick your friends and criticize your beliefs. He is judgmental and fixed in his ideas, attitudes and prejudices. Nothing you can say or do will change him. You will have the distinct feeling of being boiled alive slowly, and you will be right.

Mr. Taurus invented the smothering relationship.
He is jealous, possessive and obsessive. Piss him off and he’ll hold a grudge forever. Unfortunately, it’s not a silent one. He will snipe and pick and make nasty remarks until you want to bash his head with the nearest blunt object.
The Taurean love for food is renown-ed, and the Bull loves to eat. By your second anniversary he could be wearing triple-X sweats and a truss. He is capable of eating himself into multiple heart attacks and will expect you to play nurse for real.
His idea of excitement is switch-ing from the Food Network to Ridic-ulousness This is perfect, as it’s not too far from the fridge, and best of all, doesn’t cost anything, as long as you are paying the cable bill, which he saw to when you hooked up.
Taureans are cheapskates. Only a Taurus would deliberately live on a beer and beans budget unnecessarily. He may have millions, but you will never see the bank accounts, although you might get an allowance. If you do get his money, it will only be because you outlived him, or murdered him in his sleep. The latter will become a tempting idea as time goes by.

Sigmund Freud’s use of psychoanalysis was a breakthrough in the field of psychiatry. But only a Taurus man could be at once so obtuse and so egotistical as to define a woman’s frustrations and unresolved emotional distress as penis envy.
The Bull’s favorite game is Grand Inquisitor. He will expect you to report every detail in your day. He will snoop and rummage through your private papers, and look in your phone, and even scope out your underwear drawer for info on your whereabouts. If you have a past, and are foolish enough to reveal it to him, he is very capable of using it against you at any time for the rest of your life. Your best bet is a safe-deposit box, and to lie your ass off.

He is so stable he’s motionless. Work and home are all he knows. You are his housekeeper.
He is so insensitive that you must smack him with a skillet to get his attention.
If you are the type who needs excitement now and then, you could just lick the light socket or have an affair. With a Taurus man, I would opt for the first choice. Although he hates change, he is perfectly capable of tossing you out on your ass one day, and moving in your replacement the next. “Ouch!”

Now to the Taurus woman….(you didn’t think I would just pick on the guys, did ya?)
She is Mother Earth in a black teddy. She is faithful, courageous and strong. The Taurean woman seeks security and a dependable mate. Money is not important as long as you can provide a nice home and the basic necessities. She has a refreshingly simple viewpoint of life. Picture fresh-baked bread, a cozy love nest, and her dainty hand in yours.

Before you go off half-cocked and get yourself in too deep…
She is as tough as nails, no matter how hard she tries to convince you otherwise. She is also a victim. You, on the other hand, will be a bastard from the instant you slip the wedding ring on her finger. Don’t forget it.
If you argue with her, she will throw whatever she has in her hands at the moment straight at your head.
Food is her emotional pleasure. She’ll eat when she’s happy, depressed, angry or just plain hungry, which is most of the time. By your second anniversary, her wardrobe will consist of sweat pants, flip-flops and a robe. Along with the weight gain will be a natural slowing down of the urge to keep the house clean. Her reasoning is that it only gets dirty again. She will, however, expect you to work two jobs to pay for her new car. She deserves it for putting up with you.

She likes to start family feuds, then sit back and observe the mayhem. She barks orders, makes pronouncements, plans everyone’s future, and expects blind obedience. Try to reason with her, and she’ll set her jaw and plant her swollen feet. “Shudder.”
She is easily depressed. Running out of ice cream can throw her into a funk. When she’s down, you will swear she is playing Kathy Bates, the maniacal nurse in the movie Misery.
She is a martyr. She blames the world, her job, the kids, her mother, and you for her own faults. If she has four plates of lasagna, then is sick later, it’s your fault for letting her eat so much.
When you’re ready to dump her, and who could blame you, make all your preparations in secret and take a day off work to move without her knowledge. Sounds cruel, but it could save you a trip to the hospital, or the morgue.
Remember that the Taurus man or woman needs to feel secure. Timing is the key to getting your way. When they go ballistic, and they will, reach for the chocolate and keep your head down. Sex will end any fight you have with a Taurean. Good luck, friend.
Till we meet again…

Lady Ocalat is a professional Astrologist, Reiki Master, Minister and Tarot Reader. She can be reached at 218-722-2240, or at Lady Ocalat’s Emporium in downtown Duluth. ladyocalat.com.