That was no partridge, that was a football! 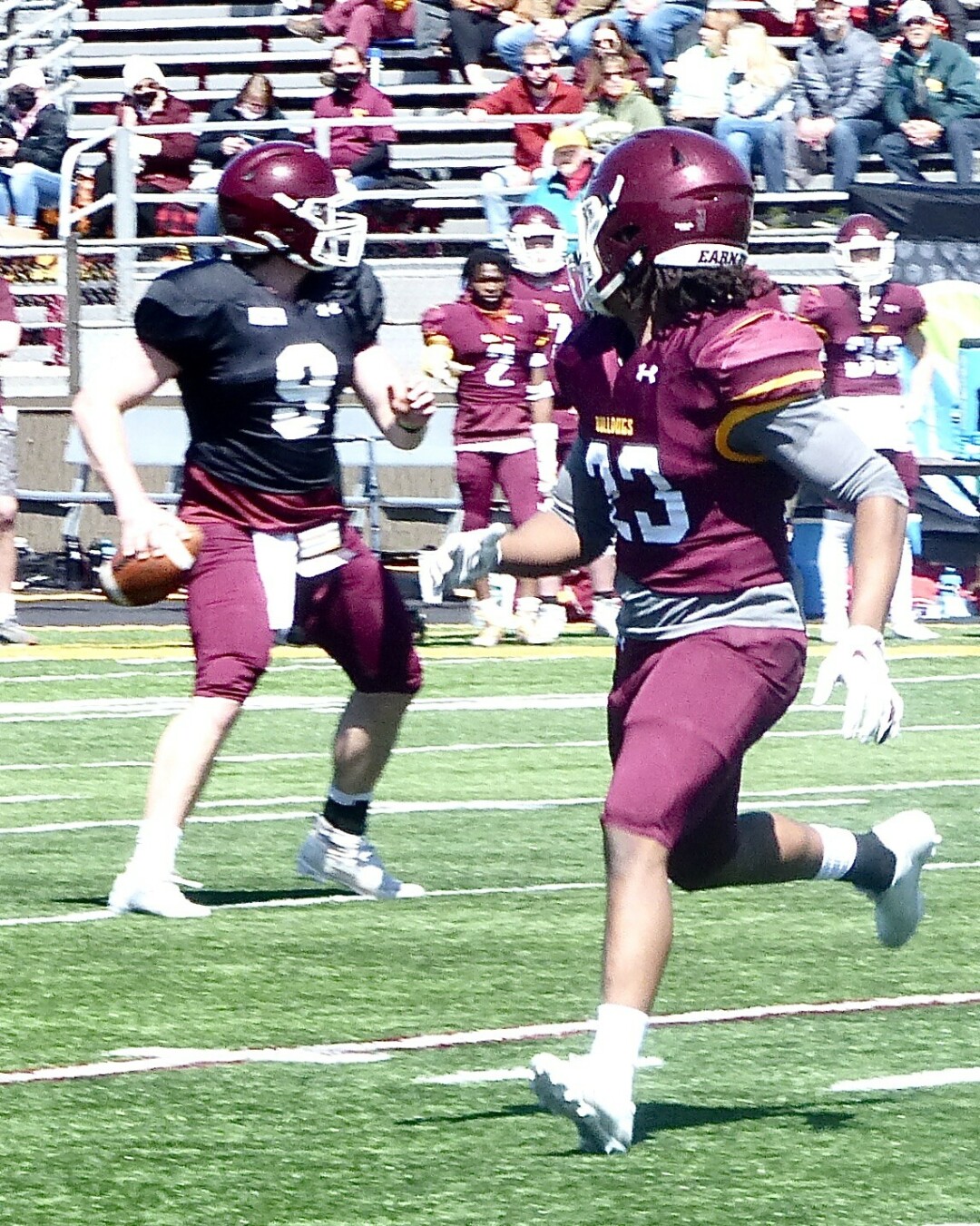 Timing is everything, and on Saturday, my personal timing prevented me from what might have been certain infamy on ESPN’s “plays of the week.”
I walked the sidelines on a beautiful spring day at Malosky Stadium, where the season-deprived UMD Bulldogs were taking on Michigan Tech in a friendly, non-counting spring football event they were calling a scrimmage.
It had to be friendly, because passes were sailing to opponents as often as to intended receivers, and special rules were assuring that this would be just a chance to run some actual plays against an actual opponent.
Bemidji State and Northern Michigan were supposed to be in the mix, with teams swapping partners, I assume, but they backed out of the loosely-gathered plans, so it was just Tech and UMD.
Special rules included no creaming the quarterbacks, and therefore no running by any quarterbacks, either.
I don’t know about Tech, but taking the running game away from UMD senior quarterback John Larson and the other UMD quarterbacks eliminates about 40 percent of scoring chances by a Bulldog attack that requires running as well as passing from its quarterbacks.
Nobody scored, and the teams occasionally ran continuous plays, somewhat casually, because it was spring, it was friendly, and even the scoreboard wasn’t working.
I was on the Tech sideline, with the sun at my back, when Tech made a couple of nice gains to reach field goal range. I hustled around to the end line and walked swiftly to get behind the goalposts for what I envisioned would be a panoramic shot of a potential field goal, made or missed.
As I got into position, the teams were ready. I brought my trusty camera up hastily and looked through the viewfinder, and realized I was zoomed in too far for the panoramic shot I wanted. I hit the switch to back out of the zoom as I watched through the viewfinder, when suddenly I heard a quite-loud “thrum” that reminded me of a time walking through the woods when I startled a partridge into flight and it zoomed past my head, where I heard it more than saw it. 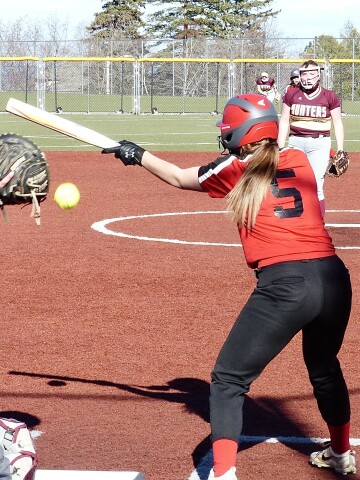 As my image sharpened on the play-ers, they were all looking at me, and I realized I had missed the placekick, and the ball had missed me – albeit by maybe an inch!
Fortunately, I hadn’t seen it, and that made me look remarkably calm and composed, because the kick had hooked right, narrowly missing what might have been the all-time knockout blow to a media-type on any sideline, and I didn’t even flinch.
Too late to duck now, I figured, so I’ll just act extremely poised and calm, so that the players would assume I had everything so together that even the ice-water in my veins didn’t show.
I shared a laugh with my good friend Clint Austin, the News Tribune photographer who I’d been sharing the sideline with. I told him he almost could have had the photo of the year – if the missile had been 6 inches to the left and nailed me right in the face. I could have been knocked cold, with a new Leica implant as an accidental contact lens, Clint could have hit the motor drive on his new camera, and ESPN would have loved to show this impromptu KO on “plays of the day.” 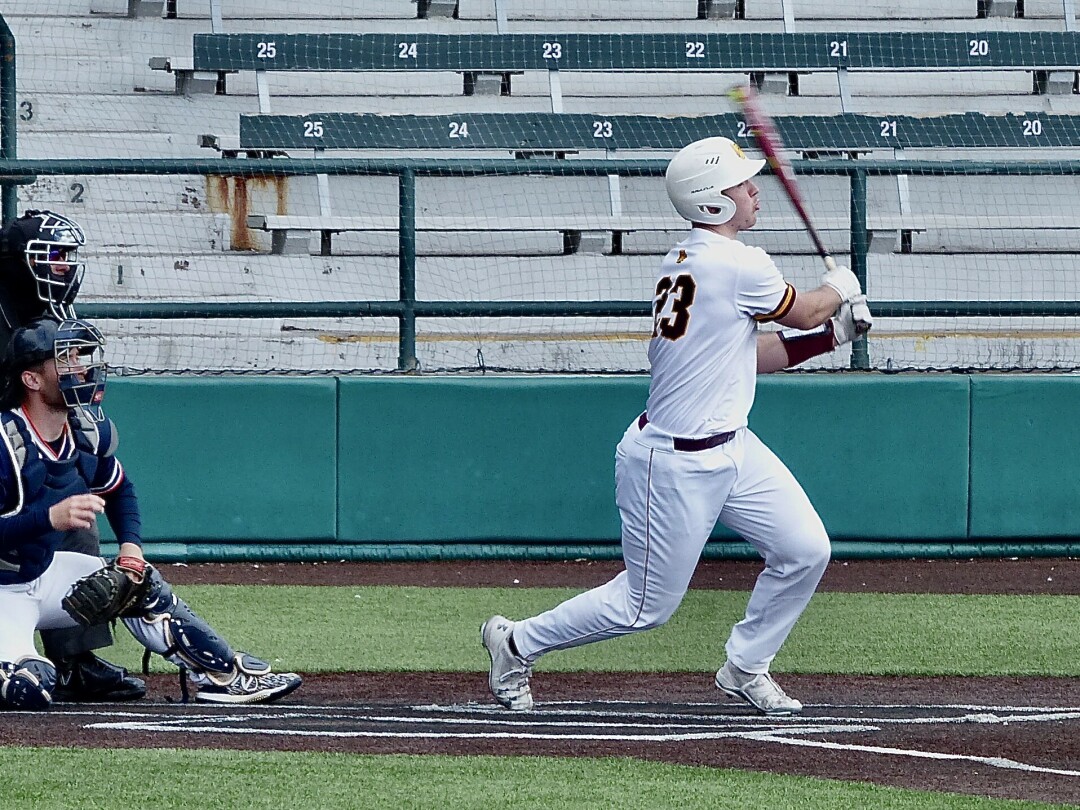 The good news was that UMD catcher Trevor Gustafson used this swing to smack a Mary pitch over the wall; the bad news was that was the only run of a 14-1 loss in the nonconference split.

There was a point where Tech made a field goal, and the Huskies were allowed to try three or four other kickers from the same spot. They all connected, so maybe Tech won 12-0. If they had been keeping score.
I’m just glad they didn’t make four field goals and one knockout of a media guy.
The whole scheme was a success, which made me think how different our lives might be if we didn’t keep score in any games.
Like I showed up at the hastily scheduled exhibition Sunday baseball game between UMD and the Mary Marauders, at Wade Stadium.
The game was supposed to start at noon, I had read, and when I arrived at about 12:30 it had just started, and scoreless. I said I thought it was on for noon, and a fellow informed me they switched the time to 10 am, UMD had won 5-2, and this was the second game of a doubleheader.
That one didn’t go so well for the Bulldogs, who lost the nightcap for a non-conference split. I roamed over to the right-field line and thought I would just at random shoot one head-on shot of a Bulldog, wearing the new white uniforms with “Duluth” emblazoned on the chest. No UMD, no Bulldogs, just Duluth. Very neat, I thought. 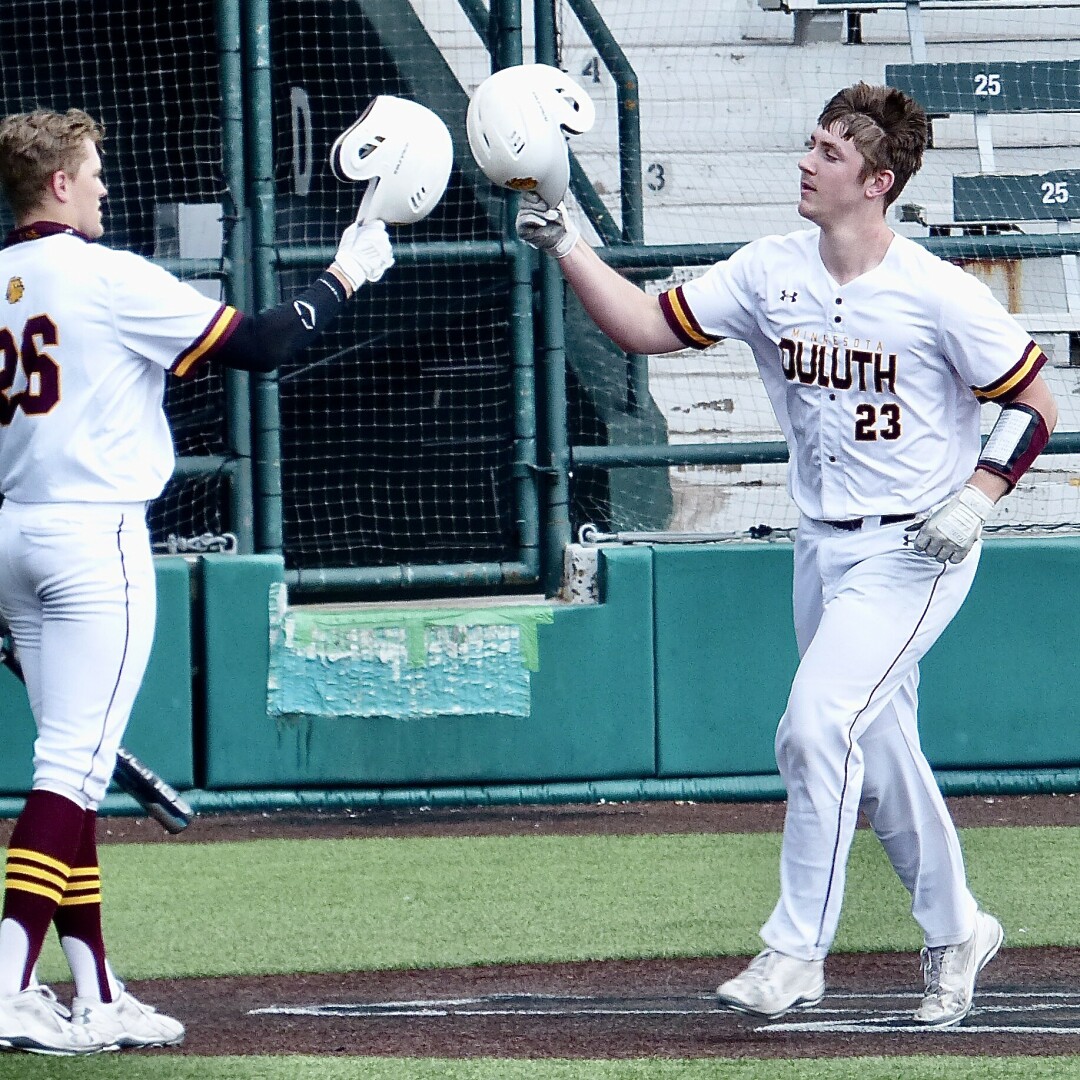 Keeping up with pandemic rules, Trevor Gustafson removed his helmet for a celebratory “helmet bump” with Austin Gordon after hitting his home run.

Mary had scored once in the first, twice in the second, and seven runs in the third, for a 10-0 lead as I focused in.
On the second pitch, the UMD batter swung with a short, choppy swing, and I caught a neat sequence of it – as the ball sailed over the left-field wall.
Turned out, the Bulldogs lost 14-1 for a non-counting split, but at least I got sophomore catcher Trevor Gustafson delivering the only UMD run, and, as he crossed home plate, he removed his helmet and did a helmet-bump with on-deck hitter Austin Gordon – the pandemic-approved version of the fist-bump.
Doubleheader split, in a pair of games just to celebrate the chance to actually play, even nonconference? Add that to the list of non-counting games where the score is unnecessary.
It happened at Duluth East’s softball field, too, which is actually at Ordean Junior High, which used to be Duluth East High School, before East moved to Ordean Junior High…get it?
Anyhow, the Greyhounds were playing a rebuilding Denfeld team, which has dedicated its season to the late Dick Swanson, their long-time and popular coaching icon who died of cancer last August.
Denfeld manufactured a run in the top of the first, but East came back to put together a rally that seemed to gain momentum as it went along. The Hunters almost escaped from a bases-loaded threat, but a key play, and clever maneuver as well, came when ninth-grader Sophie Socha dropped a perfect squeeze bunt down the third base line.
The Greyhounds went on to win 14-1, but once again, the score, and the result, mattered less than the fact the game was a celebration of being able to get outside and actually play a game.
Congratulations are in order for Nick Swaney, a senior sniper who signed with the Minnesota Wild and is embarking on a pro career with the Iowa Wild.
Also, a pair of high-potential juniors – Jackson Cates and Cole Koepke – both signed pro contracts and will not return to the Bulldogs for their senior seasons. Koepke, from Hermantown, signed with Tampa Bay and reported to the Syracuse Crunch, while Cates signed with the Philadelphia Flyers.