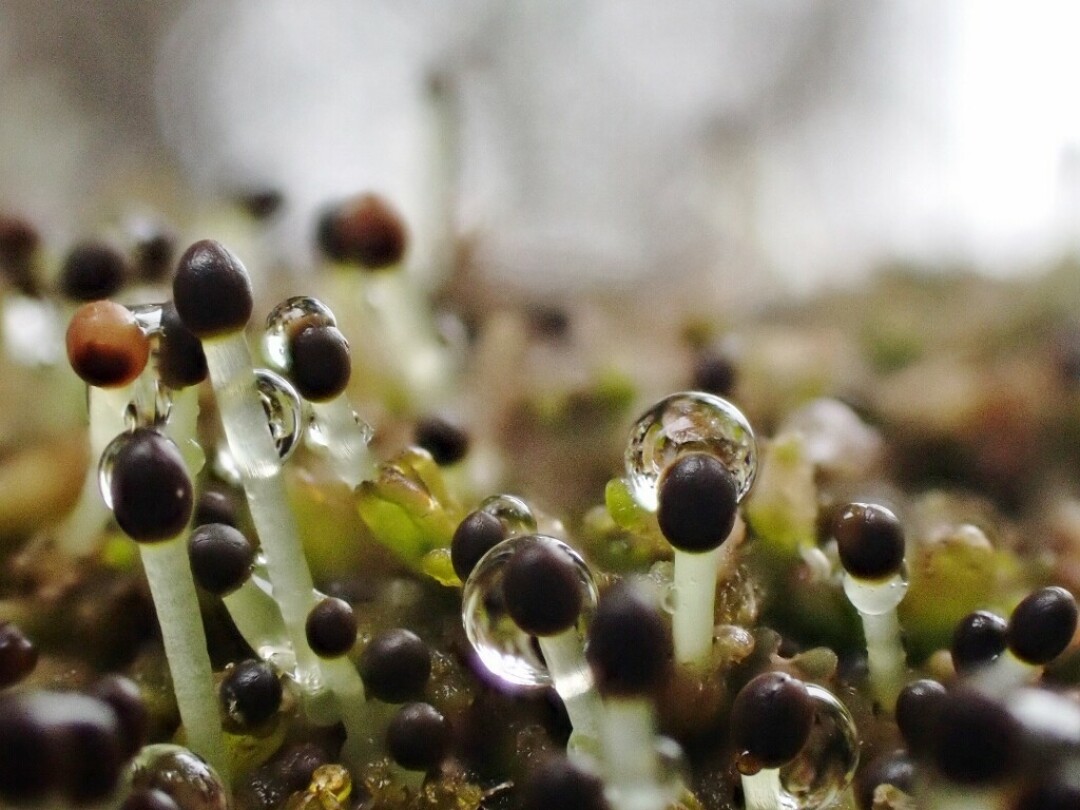 Leafy liverworts are tiny plants who raise their brown spore capsules into the breeze atop translucent stems. Photos by Emily Stone.

On one drippy day, I found myself staring up at the exposed roots of a precariously perched hemlock tree and wondering when it would finally topple from the bank and shatter across my narrow town road.
Edging in for a closer look, my eye gravitated away from the gnarl of roots and dry dirt, and settled on the lush green landscape to the tree’s left, resting at eye-level.

In the little swale, a few old logs and stumps reclined peacefully. Mosses and lichens in every shade of emerald, forest, and spring draped over their bodies as if it were a gathering of time-softened grandmas knitting blankets, while the loops and patterns of vibrant yarns spilled out of their laps to engulf the world in comfort.

Trusting that the old hemlock would not choose this calm day on which to topple, I took three big steps up the bank so I could enter the green room. The sloping floor was only as big as my office.

From standing height I observed the patchworks of textures – thin grasses, shiny wintergreen leaves, fuzzy mosses, and dusty-looking lichens. Then a bouquet of pixie cup lichens on the side of a stump caught my eye, and before I knew it, my knees were wet and I was nose-to-nose with a fairy castle.

The decaying stump was only shin-high and as round as my own head, but every fiber of the soft, red-brown wood was covered by diversity woven of our matriarch. 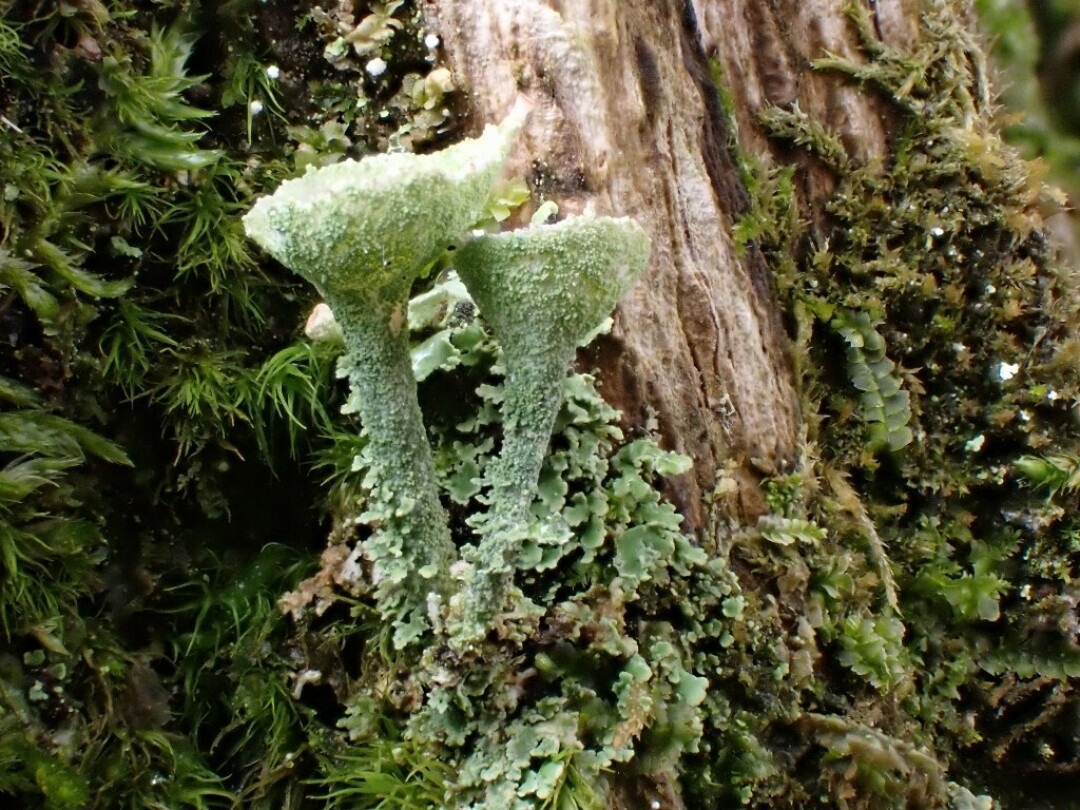 Entering this miniature world filled with red-tipped British soldier lichens, dusty green tentacles of squamulous lichens, and those chalice-shaped pixie cups made me half-drunk on wonder.

And then, a shimmer beyond the stump-castle caught my eye.

From a green-draped log bristled a forest of tiny, luminous stems, like filaments of frosted glass. Each column was topped with a shiny brown head--so that they looked like magical matchsticks – and clasped at its base by a tiny cup of leaves.

My eyes traveled among them on a Lilliputian safari, shrinking down to smaller than an ant in order to fit among the stems without getting soaked by glittering drops that perched here and there.

I later discovered that these were the reproductive structures of leafy liverworts. Also called scale moss, liverworts are plants whose leaves are only a single cell thick.

With no structures of support, they sprawl along the surfaces of rocks, soil, and trees, often intermingling with their similar-looking, but distant relatives, the mosses.

Like mosses, liverworts reproduce through spores instead of seeds. But mosses send their spores skyward on wiry, green or brown stalks called setae; structures that keep bristling above the leaves long after their capsules have emptied into the wind.

Liverwort spores mature inside their capsules while those brown globes stay nested down into the cups of leaves. Only when the spores are ripe does the seta expand and lift the capsule up just high enough to catch a breeze.

Four lines of thicker cells dry unevenly, which puts stress on the shrinking tissues and bursts the capsule open. 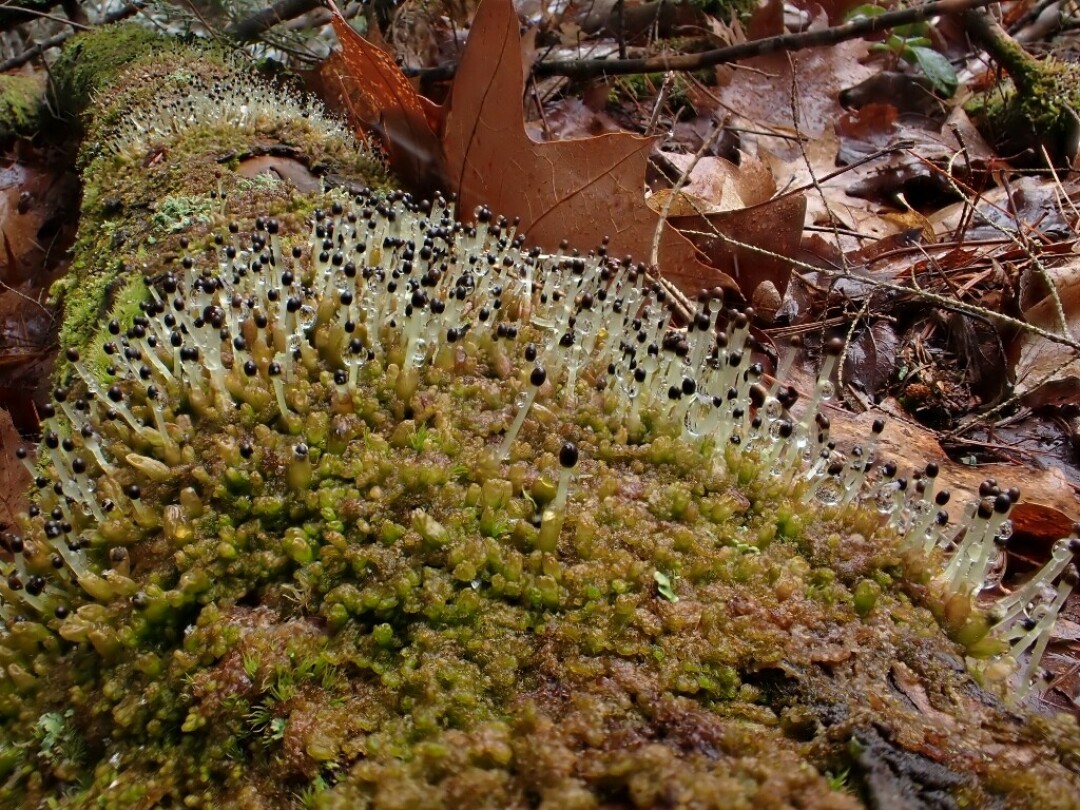 Thousands of leafy liverwort sporophytes appeared on the fallen logs.

I spotted a few of these flower-like capsules in among the others, and admired the rust-brown color of the spores.

While some spores will fall out on their own, or catch a ride on slug or beetle, some of them are ejected through the action of cells called elaters.

With a spiral band of thickening, instead of the capsule’s straight lines, a single, water-filled elater cell will coil as it dries. Tighter and tighter it twists, until it tears itself free from the inside of the capsule and flings spores into the air with its sudden flight.

A day later, the translucent seta bends down and begins to melt away.
When I finally looked up from this fairy forest to rest my eyes, I was surprised to find that thousands of these little beings carpeted many of the logs in the glade.

Who waved the magic wand?

With my search image trained, with my brain now knowing what to look for, a whole new world had materialized in minutes.

Behind me, the trunk of the old hemlock tree still stood straight and tall, its rise and fall controlled by a clock much slower than that of the setae. It, too, makes little brown globes full of new life at the top of its stem. It, too, will one day crumple to the ground. And on its softening trunk, the earth will knit blankets of lush diversity.

Will you see them?