The sun shines on Lincoln Park 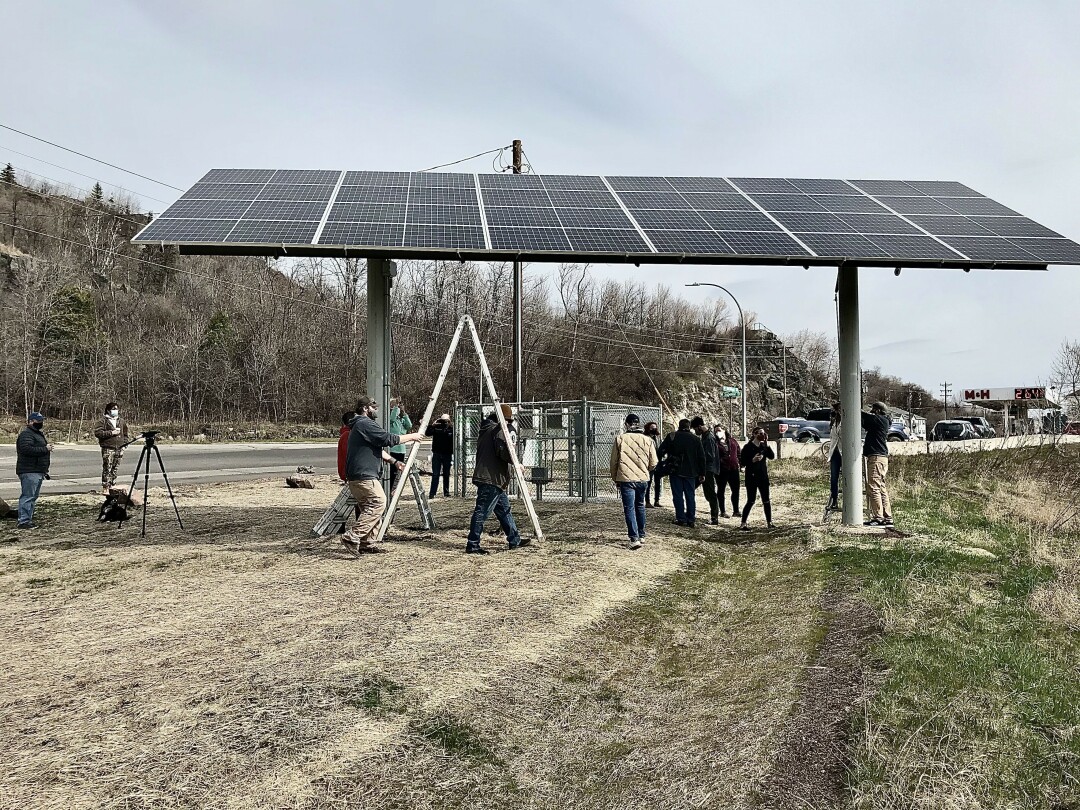 Employees of Wolf Tracks Energy move a ladder so they can read a gauge on the solar panels that give a reading for the correct tilt to maximize energy production. Photos by Jim Lundstrom.

Sunnier days are ahead for some veterans and low-income families, thanks to the $200,000 Lincoln Park Solar Garden that was created by the Lincoln Park-based community organization Ecolibrium3 and community partners.

The first of what will become a semi-annual tradition took place Sunday, April 18, when Ecolibrium3 had supporters gather at the new solar garden nestled between I-35 and Michigan Street. The morning’s mission was to adjust the solar panels for maximum gathering efficiency after they had been tilted at an angle to help reject snow through the long winter.

Jodi Slick, founder and CEO of Ecolibrium3, said the solar garden location is perfect to advertise a progressive nature in Duluth to the 60,000 vehicles that pass by on the freeway every day, as well as serving as an entryway to the Lincoln Park neighborhood.

Phase 2 of the solar garden project will be the displaying of art by six community artists, installed at the back of the solar arrays. Eventually, the solar garden will be a stopping point, a talking point for the district and a gathering place that will include free Wi-Fi.

The project is partially funded by Minnesota Power’s Low Income Solar Pilot Program, the first of its kind in the state. The utility’s program provides funding for projects that make it possible for income-qualified customers to have easier access to solar power.

While Ecolibrium3 owns the solar array, Minnesota Power will buy all the electricity the project produces and those proceeds will go to benefit two organizations – a quarter of the money goes to the Duluth Veterans Place, a transitional housing project created by the Minnesota Assistance Council for Veterans; the rest of the revenue will be assigned to a fund Ecolibrium3 is developing to offer financial assistance to families facing utility disconnections.

Among the folks who showed up for the solar panel tilting was Renee Van Nett, who represents the Fourth Council District, where the solar garden is located. Van Nett was also elected council president this year. 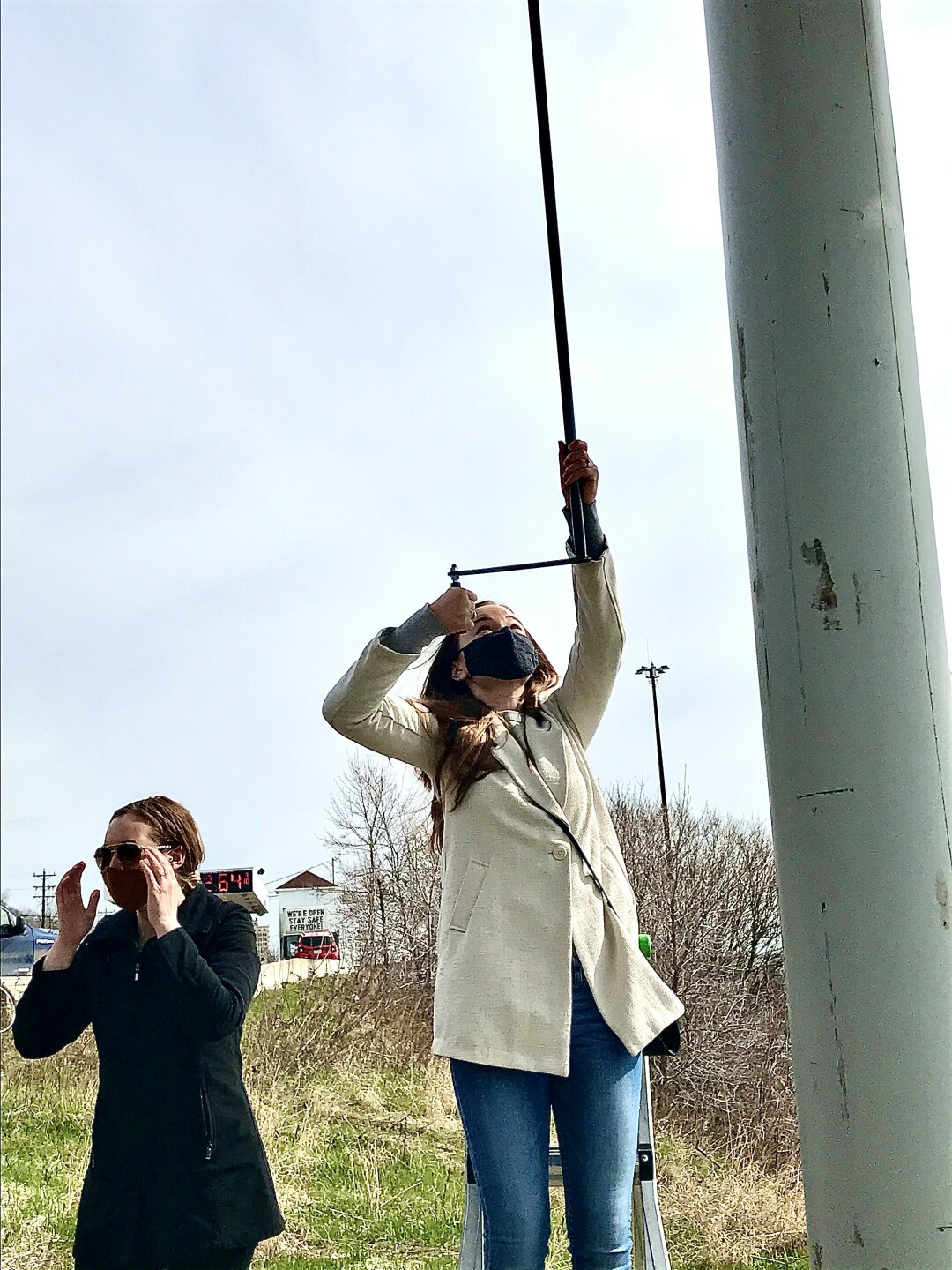 Maurice’s employees Erika Monette and Jillian Samson (turning the crank on the solar panel). Maurice’s is one of the proud community partners Ecolibrium3 established in support of this visionary project, and the women said it is just the sort of community-minded project the company likes to support.

“My community, the native community, believes we should have been doing this all along,” she told the attendees. She added that the project – supported by community organizations and individuals – is a great model for going forward, and represents how when all are focused, “We can all do this if we work together.”

Van Ness and others took turns turning the crank to tilt the panels for maximum efficiency, under the direction of a crew from Wolf Tracks Energy of Duluth, the company chosen to install the panels.
In looking for partners to help make the solar garden a reality, Maurices, the Duluth-based women’s clothing store, stepped up.

“We’re always looking for opportunities to be more involved in the community,” said Jillian Samson, an internal communications and community specialist with Maurices. “We thought it was the perfect time to get involved with Ecolibrium3. These solar panels just seemed like a perfect fit.”

The solar panel-tilting event was actually the kickoff to a week of activity from Ecolibrium3 in support of Earth Day on April 22. The organization prefers to celebrate an entire Earth Week.

Throughout the week noon webinars were held on a variety of topics. On Earth Day they will hold a virtual Earth Day Trivia contest from 6 to 7:30 pm. Register for it here.

As part of Ecolibrium3’s Eco3 Earth Week celebration, Main Street Lincoln Park is hosting a Lincoln Park Spring Clean Up on Saturday, April 24, from 10 am – 2 pm. Individuals, families, civic groups and friends are welcome to sign up, don some gloves, nab a grabber, and help put some shine back on the Craft District.

The goal is to have 150 cleaner-uppers who are willing to show up and do their best for the neighborhood.

“Duluth has a lot of conscientious citizens who routinely take a garbage bag along with them on their daily walks and visits to their favorite parks, which is a fantastic habit, but those folks can’t make a dent in a winter’s worth of waste”, says Shannon Laing from Main Street Lincoln Park. “With a mild winter and more folks getting outside as a break from Zoom meetings coupled with an early snow melt means there is more trash, more eyes noticing, and more people who want to help.”

With Main Street Lincoln Park staff taking care of hazardous items, volunteers will be given gloves and pickers to de-litter an area in the Lincoln Park neighborhood.

To help maintain physical distancing for participants at the registration table and to have an accurate count for cleanup equipment, volunteers should to sign up here.

Volunteers can go home with a kit to do clean up in their own neighborhood provided by Keep Duluth Clean (while supplies last) and a goodie bag from Main Street Lincoln Park.

Speaking of Keeping Duluth Clean, keep an eye on this relatively new organization for future events related to its name.

Ecolibrium3 was not the only organization to make a week of Earth Day. The Lake Superior Zoo is holding a Party for the Planet.

No, they did not have the preschool children wrestling with invasive plants, but their parents removed 239 invasives such as buckthorn and honeysuckle from the less-than half-acre preschool playscape area.

What does it mean to have that sort of volunteerism? 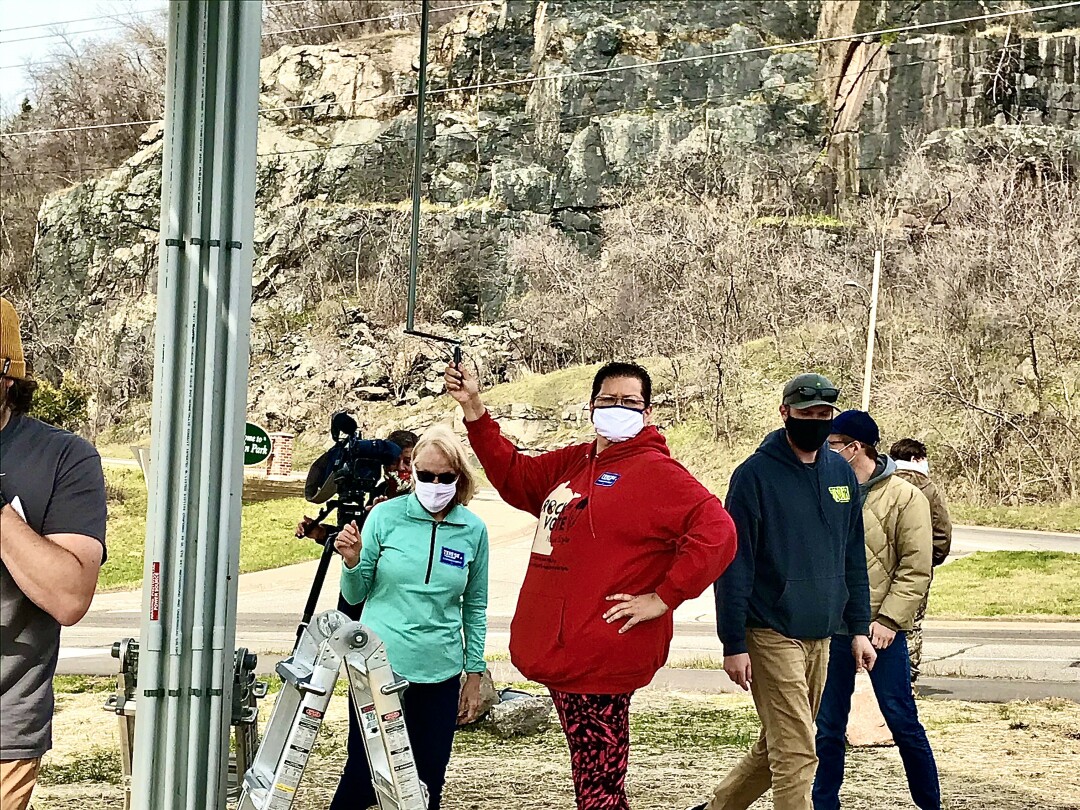 “It’s huge,” Wilcox said. “We don’t have any staff that are devoted to gardening at the zoo. We have our grounds staff who mow the lawn and clean out brush. We have a nice volunteer program who do all of our gardening in terms of flowers and working with the 1854 treaty authority to identify the invasive species and plant native species.”

With Party for the Planet, the zoo invited groups and individuals to sign up for a clean-up session wherever they want to do it.

“We have more than 50 groups across the Northland doing clean-ups,” Wilcox said. “And we ask to clean up wherever they want – their neighborhood, the beach. We’re really excited and hope there’s a lot of activity protecting our waterways from litter. We want to keep it clean for animals and people.”

Clean-up kits are available while supplies last. Participants will be asked to record their participation through a survey and will be entered into a drawing for prizes.

Wilcox said she was happy to see so many groups with children participating in the cleanup.

“Getting kids out there doing it helps the mindset about how gross it is to pick up someone else’s trash,” she said.

You can also plant a tree to help spruce up the lush grounds of the zoo.

“Emerald ash borer and various wind events in the last couple of years have taken out trees,” Wilcox said. “Trees are expensive, we’re finding out.”

You can learn how to donate $40 for a tree at the Party for the Plant website noted above.

Native trees will be planted, and as well as providing shade and beauty for visitors, Wilcox said zookeepers can use fallen branches as “browse” for some of the herbivores.

“We can use the branches, which we call ‘browse’, for the animals to chew on and eat,” she said. “Or something like a willow tree, you can clip it continuously and feed it to the animals.”

People in all eight Great Lakes states will be out on Saturday for clean-up efforts. You can find out what’s going on in your area at greatlakesadopt.org.

A fairly large clean-up event has been organized for Wisconsin Point by Friends of Lake Superior (folsr.org), with onsite registration at Parking Lot 1. The event runs 10 am to 2 pm.

And as we’re all picking up other people’s trash this weekend, let’s think about how a world without litter might look.