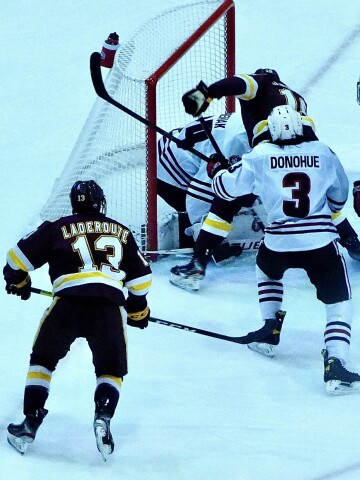 All of the cliches worked, when the amazing success of three Minnesota teams reaching the NCAA college hockey Frozen Four were exchanged for the sheer disappointment of coming home without the championship.

“You can’t win ‘em all,” was one, because the NCHC, which is generally regarded as the strongest league in college hockey, had won four consecutive NCAA titles, and UMD had won the previous two and was taking a shot at winning its third straight, but instead saw its 9-game winning streak in NCAA tournament games snapped in a 3-2 overtime loss to Massachusetts, which gained a measure of revenge for a 3-0 loss to UMD in the 2019 NCAA final.

“Never give up,” works in nearly every endeavor, but particularly when facing a deficit in a hockey tournament. When all five Minnesota hockey-playing Division 1 schools made the 16-team NCAA tournament field, they were scattered out to three of the four different regions, and they all won their opening games.

The fact that MSU-Mankato had to come back from a 3-1 deficit to stun Quinnipiac 4-3 with two goals in the final five minutes of regulation, and win it on Ryan Sandelin’s overtime goal, was proper evidence, reinforced when the Mavericks thoroughly outplayed Minnesota 4-0 in the West Region final to earn the Frozen Four.

“It doesn’t matter how well you played all season, getting hot at tournament time is what counts,” is something of a stretch, but it applied to UMD in winning both the 2018 and 2019 championships, and it also covers Massachusetts, which finished the irregular COVID-19 altered season with a strong second half, but still finished third in Hockey East, behind league champ Boston College (13-2-3) and second-place Boston University (7-2-4), with a 12-4-2 Hockey East mark and 20-45-4 overall. UMD also had failed to win the NCHC before getting hot in the tournament.

The tournament lived up to its tradition of exciting and unexpected devel-opments, as two NCHC teams – UMD and St. Cloud State – were joined by Minnesota State-Mankato, representing the final season of the disbanding men’s WCHA, and Massachusetts, which was the outlier in what appeared to be a Minnesota extravaganza. 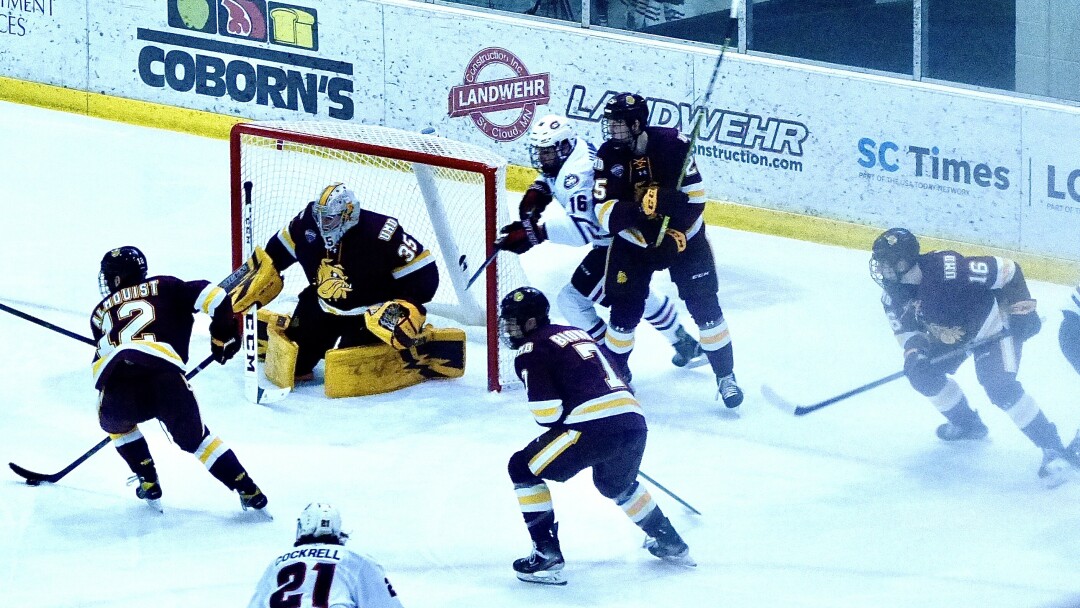 “I’m very happy for our kids,” said UMass coach Greg Carvel, who took over a downtrodden program five years earlier, cleared out some personnel and rebuilt with all-new recruits – none of whom was from the Boston area, coincidentally. “They’ve earned this. We’ve pushed them really hard the last four years, especially these seniors.”

The championship game started with the speedy St. Cloud State Huskies on attack, as freshman Veeti Miettinen broke in clean and beat Minuteman goalie Filip Lindberg with a hard wrist shot, but it glanced off the crossbar at the upper right corner.

At 7:26 of the first period, Aaron Bohlinger broke out of the UMass end, and as Seamus Donohue, one of the best defensemen in the country, turned from the left point to make sure it wasn’t a breakaway, a teammate fell down and slid into Donohue, leaving them both in a heap.

Bohlinger, who hadn’t scored a goal all season, suddenly found himself on the left of a 2-on-0 with teammate Ryan Sullivan.

As they closed in, Bohlinger sent a perfect pass across the slot to Sullivan, who returned the puck to Bohlinger for his first college goal, at the left edge for a 1-0 lead.

The Huskies kept trading rushes and appeared to have the upper hand in the flow, until, with 1:04 left in the opening period, Cal Kiefiuk, perhaps the Minutemen’s best player, dashed around behind the net for a wraparound, as a Huskies defenseman  belatedly chased him and goalie David Hrenak moved to thwart him. Kiefiuk swung out as if to try a wraparound but instead passed across the crease to Reed Lebster, who had an unmolested tap in on the backside.

“Even though I liked our start,” Larson said, “…we end up down 2-0 at the end of the first period. Once they got up, they went into a pretty structured 1-3-1 in the neutral zone, and they took away the middle and what we like to do.”

It was a remarkable game, because if you edited out the five goal-scoring plays, there would be no way to tell from the flow of the game which team won.

But the Minutemen, who got back ace goaltender Filip Lindberg, who had missed Thursday’s overtime victory over UMD, played with great poise, particularly when the Huskies got a chance to catch up with an early power play in the second period. Instead, UMass came up with a spectacular short-handed goal when Philip Lagunov stickhandled up the right side and pulled the puck past Huskies Nick Perbix, then cruised to the goal to beat Hrenak for a 3-0 lead. 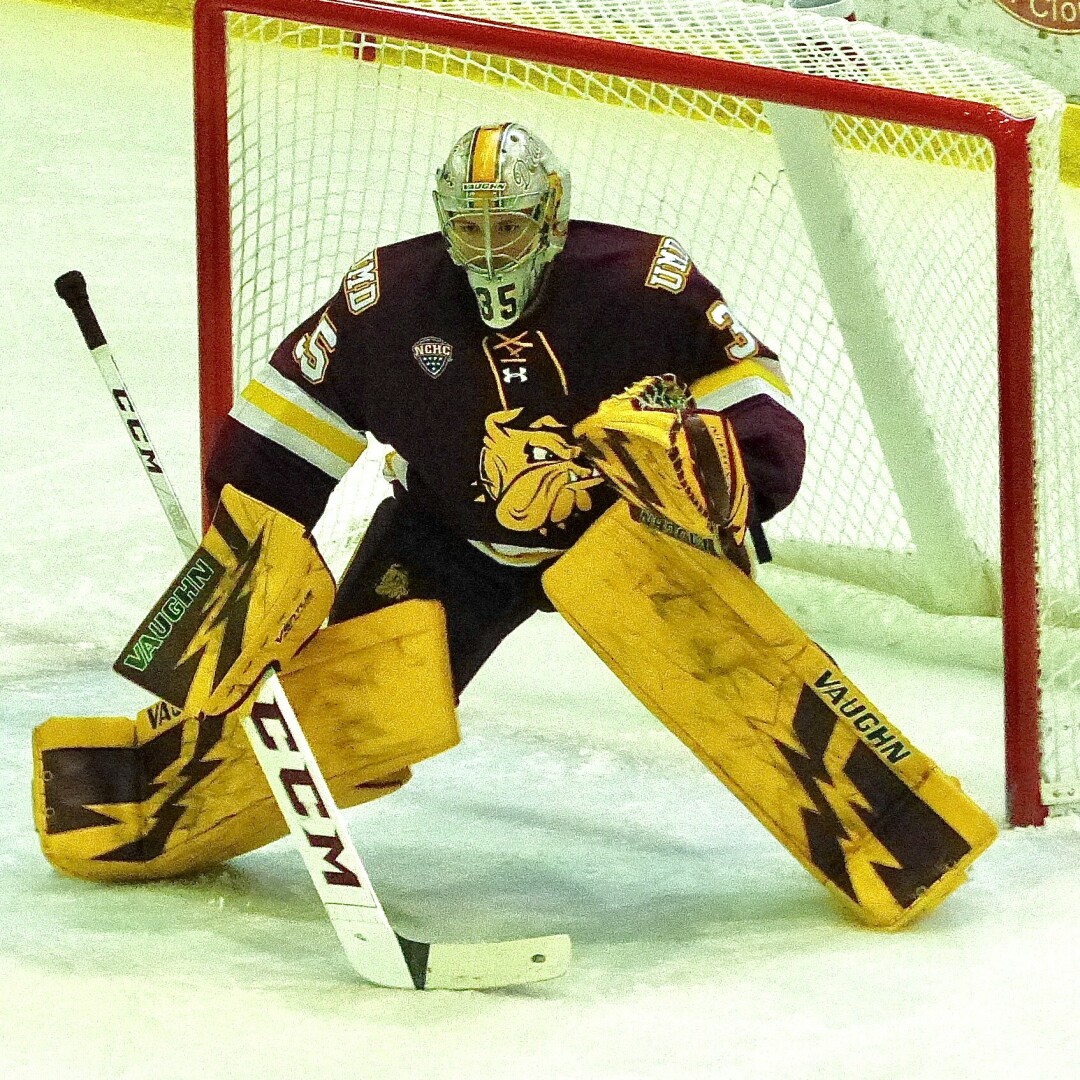 Goaltending was solid all season with freshman Zach Stejskal and sharing the net with sophomore Ryan Fanti.

Matthew Kessel added a power-play goal later in the period, and Bobby Trivigno converted a set-up by Lebster in the third. Lindberg, who had given up 12 goals over the final 13 games leading up to the final, stopped all 22 St. Cloud State shots.

The Huskies can store up the experience of their first Frozen Four, and the scintillating victory in the semifinals against arch-rival Mankato to open the event.

Spencer Meier’s early goal, on a power play, put St. Cloud ahead 1-0, and when Nathan Smith tied it with a power-play goal from the slot at 16:09, the Huskies countered for a goal by Kyler Kupka 10 seconds later when he skated to the crease and knocked in Nolan Walker’s pass from deep on the right.

Will Hammer expanded the lead to 3-1 at 2:40 of the second, but Mankato stuck with its system and stalked back for three consecutive goals, taking a 4-3 lead as the second period overlapped into the third.
Walker Duehr scored at 12:02 of the middle session, and Nathan Smith connected for a power-play bullet from the left circle that caught the upper right at 14:24. Duehr’s pass put Dallas Gerads in for the tie-breaking goal at 4:18 of the third for the Mavericks, but then it was St. Cloud State’s turn to respond.

Huskies coach Larson had moved Kupka up from the fourth line to replace Easton Brodzinski, their leading goal-scorer who suffered a broken bone in his leg on a heavy hit against Boston College, and Kupka got his third goal of the season in the first period.

Larson also installed Joe Molenaar on the fourth line in Kupka’s place, and he tied the game with a goal at 10:14. But there would be no overtime, simply because the Huskies scored with only 54 seconds remaining, leaving no time for another equalizer.

As deflection goals go, this was a beauty. Seamus Donohue, on the left point, cut loose with a shot that was purposely wide right. Nolan Walker, screening in the slot, stepped to his right, and reached back to tip the puck with the blade of his stick, and the ricochet went just inside the right post. Goaltender Dryden McKay, Mankato’s Richter Award finalist, had no chance on the perfect deflection.

For the Huskies, advancing to their first final was a challenge, but they were ready. After all, they had beaten Hockey East runner-up Boston University 6-2 at the Albany Regional, and followed that up by whipping Hockey East champ Boston College 4-1 to earn the trip to Pittsburgh.

But Larson knew what to expect, after observing UMass beat UMD 3-2 in the second semifinal. Larson, who used to assist UMD coach Scott Sandelin and helped assemble the first two of Sandelin’s three NCAA championship teams, had sent his Huskies against UMD seven times this season, and the Huskies, unranked and unregarded during what was thought to be a second rebuilding season, beat UMD five of the seven games, including a 4-3 overtime game that determined second place in the NCHC, and a 3-2 victory in the NCHC tournament semifinals.

The semifinal victory UMass won over UMD was a surprise, mainly because UMD seemed to always find ways to win in NCAA tournament play. The Midwest Regional final, a 3-2, 5-overtime epic triumph over top-seeded and No. 1 ranked North Dakota, was the most recent example.

And UMD had a distinct edge in flow through most of the game, although Zac Jones staked the Minutemen to a 1-0 lead with a power-play goal at 15:30 of the first period. Two minutes later, Tanner Laderoute tied it, converting the rebound after Quinn Olson’s shot had been partially blocked by goalie Matt Murray.

In the second period, UMD’s Cole Koepke gave the Bulldogs a 2-1 lead when he swung out from deep on the right for a shot, which was blocked, but gave him a second chance, which he put away at 11:00.
That 2-1 UMD lead held until 8:25 of the third period, when Anthony Del Gazio, another player getting a chance when four Minutemen were sidelined by COVID-19 protocol, knocked in a loose puck past goaltender Zach Stejskal for a 2-2 deadlock.

The Bulldogs had seemed content to fall back and sit on the 2-1 lead, but the Minutemen pressed their chance with an aggressive forecheck, sending their strong-side defenseman crashing hard down the boards to keep breakout plays from developing, and finally capitalizing for the tie. They continued to push until the finish, but the real surprise came in overtime.

UMD had outshot the Minutemen 26-11 through the first two periods, and still maintained the edge through the third, even while absorbing an increasing physical pounding from UMass forecheckers.

But when the teams rested for ice resurfacing, then hit the ice for overtime, the Bulldogs appeared to be completely drained. Whether from exhaustion or from Carvel’s use of four lines rotating against UMD’s three, the Minutemen took charge and outshot UMD 13-2 through 14:30 of overtime. Stejskal was exceptional in holding off the barrage, until the final play.

Travigno, who seemed to be all over the Bulldogs, came out from behind the net for what looked like a wraparound, but instead he passed across the crease where Garrett Wait – a transfer from the University of Minnesota, and the only Minnesotan on the UMass team – batted it in and UMass had its 3-2 victory.

Erasing the two-year-old memory of being stifled 3-0 by UMD in the NCAA final at Buffalo the last time a Frozen Four was held might have provided plenty of satisfaction for the Minutemen. Except, they had one more thing in mind, and they pulled it off to wipe out the amazing feat of being the only Eastern team facing three Minnesota teams – and winning the big trophy.