Me and Reader’s Digest 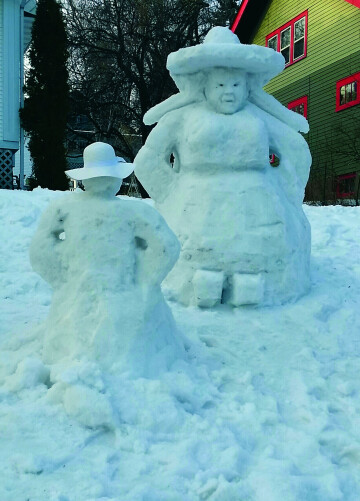 A year before her death a friend repaid a kindness with a perfect gift. Donna had requested a snow sculpture of a Dutch woman when she was home bound.

When I finished it she gave me a dozen miscellaneous Reader’s Digests from the decade between WW II and just after my birth.

I was introduced to Reader’s Digest by my 7th grade English teacher, Mrs. Jones. It was an anxious year for me. I was a new kid with a “Southern” accent in all mayonnaise Minnesota. I hadn’t made any friends and was self conscious about getting eyeglasses.

To top it off President Kennedy got himself assassinated on Nov. 22. It figured, my new school was Garfield Jr. High, named in honor of our second assassinated president.

I learned about the attempt on Kennedy’s life from Mrs. Jones. She had been out of the classroom for an uncharacteristically long time. When she returned she quietly told us about an attempt to murder of the President. I would learn of his death after walking home.

Mrs. Jones was the only teacher I recall who ever singled me out for praise in front of my classmates. Maybe it was because I was a new kid in school. We had just finished reading Robert Louis Stevenson’s Treasure Island and she had given us a 50 question test on it. She announced that only one student had turned in a perfect test and asked the class to guess who had earned it. After all of the usual A students were eliminated she announced that it was me.

That was a lot better than John Vogel asking me if I wanted a fight.

The best thing Mrs. Jones did was introduce me to Reader’s Digest. Every month she got a classroom set. They occupied the shelves below the windows that overlooked Garfield Street.

She encouraged us to pull out a Digest to read whenever we finished class assignments early. She also assigned silent reading in the Digest. I particularly liked a short story about the rescue of English troops at Dunkirk called “The Snow Goose.”

I especially remember reading about the Stanleyville massacre in the Belgian Congo. I still visualize European colonists having their livers cut out by angry crowds, who ate them in hopes of gaining power the same way their ancestors devoured the livers of lions to gain the lion’s strength and courage.

Before school ended my Dad lobbied my mother to go on a trip to Europe. My Mom told him to take his Mother instead because she wanted to rent a lake cabin in Northern Minnesota with my brother, sister and me. That’s just what we did.

I made two marvelous discoveries on Lake Pokegama. I started collecting agates and I discovered a collection of dog eared Reader’s Digests.

The magazines debuted in the 1930s. Each one offered about 40 stories abridged from other magazines.
They introduced me to the Japanese man who first cultured pearls and the menacing Tontons Macoutes of Haiti’s Papa Doc.

When my grandmother, also an English teacher, discovered my affection for the magazine she gave me a subscription. It lasted for six years until I informed her that I had grown up and was now reading Newsweek and daily newspapers.

Fifteen years later when I was teach-ing at Morgan Park Junior High, I was awarded a National Science Foundation scholarship to help design better ways to teach geography. Our sessions were held in the Macalester classrooms where Professor Humphrey had taught.

The rooms were about to be renovated and before I returned home I bought one of the chairs where the Vice President had lectured.

One of the charming features in Reader’s Digest were jokes and anecdotes it solicited from its readers.

They appeared in columns called “Life in These United States” or “Laughter, the Best Medicine.” My favorite went something like this:

One winter day Jimmy’s parents were watching their son through the window as he built a snowman.

With growing alarm they watched a terrible transformation take place as their son fashioned a very well endowed snow woman. They summoned him inside and demand that he explain himself. All their confused son could think to say was, “That’s just Billy holding his hands on his ears to keep them warm.”

Harry Welty can be found digesting at lincolndemocrat.com.