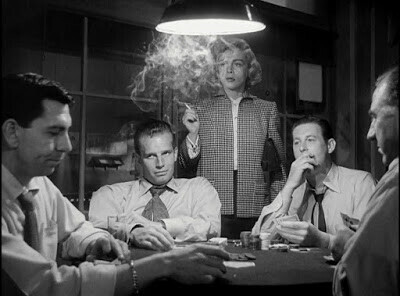 Thrown into weird sleep patterns recently, on Easter Sunday morning I found myself wide awake at 3:30 am. My first thought was to dive back into the thick, ponderous tome I’ve been trying to wade through, but decided instead to find an engaging movie.

I wanted to see what new offerings the Criterion Chanel had for the coming week, and to my delight found a brand-new 18-film collection called The Gamblers, beginning with one my favorites in the film nor genre, Gilda from 1946, and ending in 1998 with Croupier.

What a selection! But I had no trouble choosing one, and it turned out to be a serendipitous selection because William Dieterle’s 1950 film noir Dark City (1950) begins on Easter Sunday, and stars Charlton Heston in his Hollywood debut, as Danny Haley, an overeducated manager of an illegal betting shop.

Heston is perfect as the poor sap whose loose ethics have turned the tables on him and his colleagues after they fleece a nice guy in a rigged card game and relieve him of a $5,000 cashier’s check that the guy (played by the likable Don DeFore) is supposed to use to buy equipment for the Los Angeles athletic club he manages.

The card game victim can’t stand the shame of losing money that wasn’t his. He hangs himself in his hotel room, leaving behind a note for his brother, who was supposed to meet him and help him buy the equipment. Unknown to the card sharks, the brother is a murderous psychopath bent on vengeance for his brother.

The movie starts with Heston leaving a shop with a wrapped box. A sign on the shop window says “Remember Her on Easter,” so we know where we are. It’s an Easter present for his girl, a nightclub torch singer (played by Lizabeth Scott – more on her later). The act of present buying prevents Heston from being arrested along with his betting shop colleagues because the cops have decided to pull an Easter Sunday raid on the shop.

Heston has been paying protection all along, so is doubly disgusted by the betting shop bust. It’s got him so down that he decides staying any longer at that job is a dead end, and he just wants to raise some dough to move on.

Heston runs into his ticket out of town in a chance encounter at the nightclub where his girlfriend sings. He sits at the bar next to the out-of-towner played by DeFore. They strike up a friendly conversation, and Heston just happens to spot the $5,000 check in DeFore’s wallet. He tells DeFore he has to leave for a card game, and the hook is set. DeFore asks if he can join the game.

Heston and his accomplices – played by Jack Webb in an against-type sleaze-ball role and Ed Begley – let DeFore win a couple hundred bucks the first night, and invite him back the next night for a chance to win their money back.

Dieterle sets up a claustrophobic atmosphere with tight closeups in tight spaces in the card game sequences. The world is closing in on the sucker, and we feel his pain through Dieterle’s sure visual style.
Dieterle began his career making silent films in his native Germany, both in front of and behind the camera. He made scores of pictures in Germany until 1930, when Hollywood called. With the advent of sound, Hollywood feared losing foreign audiences, so were hiring native filmmakers from many countries to come to Hollywood to dub pictures in their languages. But instead of dubbing films as they had expected to be doing, Dieterle and his wife found themselves acting in German-language versions of Hollywood films. They did four, including a version of Moby Dick that features Dieterle as Ahab.

Dieterle’s acting so impressed Hal B. Wallis, vice president of production at Warner Brothers, that he asked Dieterle to say on at the studio. In 1931 Dieterle directed his first American film, The Last Flight.
In 1934 Dieterle kicked himself upstairs to making A pictures by convincing Warner Bros. to do a film version of Max Reinhardt’s – Dieterle’s former Berlin colleague – stage version of Shakespeare’s A Midsummer’s Nights Dream, featuring WB actors Jimmy Cagney, Olivia deHavilland and Mickey Rooney.

That led to other A-list pictures such as The Story of Louis Pasteur starring Paul Muni in 1936, for which Muni won a Best Actor Oscar; The Life of Emile Zola, also with Muni in 1937, which won three Oscars; The Hunchback of Notre Dame with Charles Laughton and 19-year-old Maureen O’Hara in 1937; and in 1941 he made what I consider his masterpiece, The Devil and Daniel Webster, starring the great John Huston as “Mr. Scratch.” Adapted by Stephen Vincent Benet from his 1936 short story of the same name, it is the Faust legend Americanized. While still in Germany, Dieterle has acted in F. W. Murnau’s 1926 Faust.

Some of those earlier Dieterle films were the blockbusters of their time.

But when America entered the dark days of HUAC and, later, McCarthyism, Dieterle’s liberal leanings worked against him. Although not officially blacklisted, he felt he was graylisted because the pictures got smaller and work dried up. He eventually returned to Germany.

Dark City may be among Dieterle’s smaller films, but it shows a master at work. The way he frames the scenes and the characters with tight closeups in tight spaces, you have a feeling of claustrophobia, which is perfect for the mood of inevitability the morally corrupt gamblers have for bamboozling poor, dead sucker.

The man’s mysterious and psycho-pathic brother begins hunting down the cheating gamblers one by one, strangling them and then hanging them from a noose. As the movie chugs forward, you feel the noose tightening for each man, and that is masterful direction.

There’s also some great dialogue. Tough and taut. In short, Dark City is the very definition of film noir. If you want to understand what film noir means in one film, this is it. Moral ambiguity. Chiaruscuro lighting and motivations. Heroes who seem like heels but in the last reel redeem themselves with an act that goes against the lack of character they have shown throughout the movie.

This could be Heston’s best acting job. As he wades deeper into the mire, we feel his pain. The star of any other genre is usually pure of heart. Heston’s Danny Haley seems like a petulant teen, sulking about being stuck man-aging a crummy illegal betting shop.

Danny seems particularly immature in conversations with his girl, the lounge singer played by Lizabeth Scott. Among the queens of film noir – which includes names such as Marie Windsor, Audrey Totter, Barbara Stanwyck, Ann Savage, Ida Lupino, Rita Hayworth – Scott is my least favorite. She always seems so overwrought. She is true to form here, where she is constantly trying to get Heston’s character to commit to her.

“I told you from the beginning I didn’t want to get involved, Fran,” Danny tells her.

“Danny, you can’t live without getting involved,” she responds.

Scott has ample on-screen singing time – I think she does four numbers – and though the voice fairly matches her normal smoky tones, it is in fact Trudy Stevens singing (Stevens dubbed many on-screen vocal performances, probably most famously for Vera Ellen in White Christmas in 1954). But Scott always did want to sing and in 1957 did release a jazz album. Just goes to show how the studio system worked.

Heston’s character keeps telling Scott not to close in on him, words that play into the sense of claustrophobia that he is beginning to feel descend on him as the situation intensifies, and that Dieterle forces everyone into with his visual style.

The always reliable Dean Jagger plays a cop who asks Danny downtown to question him after the gambling den bust. He knows Danny has graduated from Cornell and served in the war, and wonders why he’s surrounded himself with lowlifes. Also in Heston’s background – brought out by Jagger – is that he remains deeply guilty after killing his best friend, a fellow Army officer, in a fight over Heston’s English wife. After telling Jagger that he’s just trying to get by and keep out of trouble, Jagger tells him a story about sheep in the slaughterhouse.

“He’s scared, panicked. The smell of death frightens him. He knows there’s danger but he can’t tell what it is. So he huddles with the rest of the flock, moving when they move. He’s a good little sheep, just keeping out of trouble, keeping out of the way. Suddenly a gate opens, and it’s a way out. He’s running down a long passage because to the sheep it looks like the way to freedom. But there’s a man with a sledgehammer waiting down at the end.”

Heston’s character further com-promises himself when he introduces himself to the beautiful widow (played by Viveca Lindfors) of the man they fleeced that he is from an insurance agency, trying to track down DeFore’s brother, the beneficiary of an insurance policy. In truth, Heston is just trying to find a photo of the guy so he and his accomplices know who is after them.

The killer remains a mystery until the end. Through most of the film he is simply represented as a massive hand wearing a big, ornate, dark ring. Only near the end is the psychopathic brother revealed to be none other than Mike “Man Mountain” Mazurki, who had a more memorable role as Moose Malloy in the great Murder, My Sweet (1944).

Fittingly, since we begin with Easter, there is redemption for Danny in the end. Despite his cheating and lying to the widow, Danny has redeemed himself to her. But while she has accepted him, he cannot live with what he has done to her family. He settles instead for Scott. “You’re my kinda girl,” he tells her before they walk off in a happy embrace.