The heavy grooves of Thy Dirty Deuce 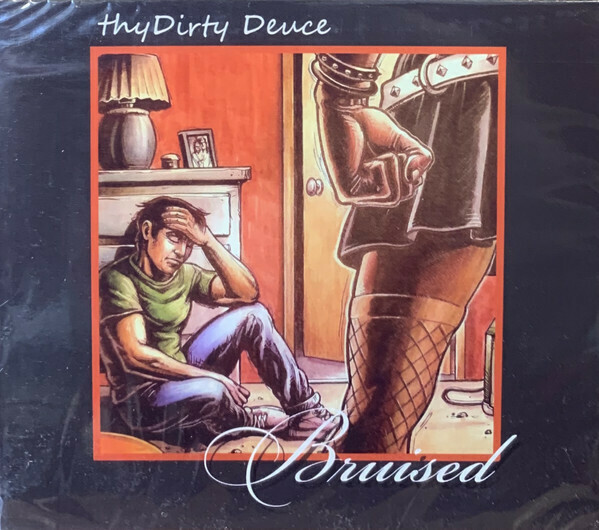 With Bruised, the new recording from Thy Dirty Deuce, Rob Atwood proves once again he is the master of gritty, groovy, heavy guitar licks and Jamey Clark is the owner of a masterful,  explosive, thunderous drum sound.

They have been and remain the heart and soul of this Door County-based greasy and original rock ‘n’ roll band.

They are assisted in this outing by David Passow on wicked harmonica. He was Atwood’s colleague in his previous band, the Milwaukee-based Probers. Gregory Roteik plays bass and Matt Oslund plays tenor and baritone sax.

Atwood and the band wrote ail the songs with the exception of Shake Well, which was written by Sturgeon Bay musical genius pAt mAcdonald, who joins the band to sing his song. It has a different, jaunty feel ffrom the rest of the record.

Things start out with “Call It What You Will,” which opens with a driving Atwood guitar lick that would sound right at home on a ZZ Top record. A groove heavy beat is lightened with the buttery tone of Passow’s harmonica and then a short but sweet guitar solo by Atwood.

Atwood seems at the top of his form, offering solid and blistering guitar work and bluesy and soulful vocals throughout. And Clark remains one of my favoritte drummers – everything crashing perfectly into place.

The third track, “Bruise,” features a tough, nasty, swaggering beat that Atwood lays a screaming psychedelic-drenched solo on top of.

Because of it’s quirky, bouncy beat, it’s impossible to stop your head from bobbing to track 4, “Psycho-Logical Judo.” “Everything’s gonna be outta sight!”

Between that and the next track there is a raunchy vocal interlude from a female TDD fan.

“Lean Back Cadillac” comes in sounding especially heavy thanks to the Deep Purplish keyboards played by producer Zach V. Would love to hear this one in a live setting (well, that’s true of the whole record, but I can see the smoke swirling on stage with this one).

“Appreciate Your Soul” could be Thy Dirty Deuce’s theme song – “Everywhere we go, we appreciate your soul.” Very catchy!

You can catch Thy Dirty Deuce live in a rare Minnesota show, May 8 at Jersey’s Bar & Grill in Inver Grove Heights.