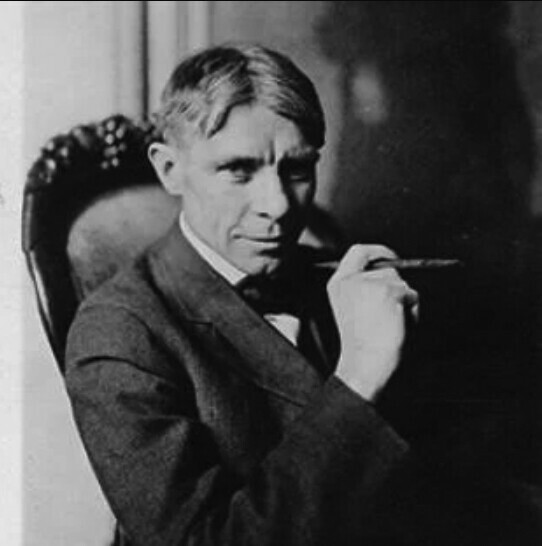 It sits looking
over harbor and city
on silent haunches
and then moves on.

Since Carl was always yattering on about Chicago, I revised it to be about Chicago in a form that satisfies me:

The fog comes in on little cat’s feet.
Like a white cotton blanket, it covers the street.
Presumably sits down and looks at the Loop
But who can tell? It’s as thick as pea soup.

Sandburg wrote his poem in 1916, when even free verse was sometimes understandable. Nowadays, being “understandable” is the last thing a poet is going for.
The New York Times Review of Books recently sent me some modern poems, two of which were called “Fog.” If you don’t like my version, here are a couple snippets from those:

“It was made of water, but not helpfully,
a stag walked inside. It was a voice
on the radio, a voiceover,
telling us about the technical difficulties
making the funeral hard to hear”

The fog has to be really thick to affect your hearing.
Or do you prefer:

“It was an alphabet on top
of the one you knew, a redo,
trills on the scales, glissando
it knew what it was doing between things.

It is very patient, teaching
you. it was different from the world, it waited
for you to say, ”I do not understand.”

Shades of Ezra Pound! (And even he rhymed once in a while.) Don’t wait—I’ll say I don’t understand right now. If either of these poems make sense to you, I suggest you make an appointment with a psychiatrist as soon as possible.

This is from “Epic Rain”:

“the chiaroscuro and sfumato, impasto
passages tumbling through foam. This is the brain
on benzos and earphones, frictionless
and plugged in, miraculously,”

It sounds like it may have been raining an Italian dinner onto your stereo. And yes, editor, it ends with a comma. I’m not sure what effect we are going for.

And finally, my favorite, from a poem called “Moon”:

“The healthy cold proved Prussian,
stringent about lavatories
and honor. I saw the afternoon
darkly, the gloaming soon
after dawn, each day spent
before its hand left
its pants pocket … ”

Of course, we like to be stringent about lavatories with the pandemic and all, but I’m not sure where honor comes in. Are we saying that bathroom attendants are the modern day heroes?

And this is the “poetry” that sells today. At the risk of sounding like an uncultured troglodyte, these works sound like unadulterated crap to me. I wonder even if the authors know what they mean.

The blank verse of Shakespeare and the poems of Robert Frost don’t rhyme, either, but at least they are recognizable as poetic. I can discern nothing that is remotely poetic in these passages, and none of this gibberish holds a candle to Shelley’s “Ozymandias of Egypt,” Coleridge’s “Rhyme of the Ancient Mariner,” or even “The Cremation of Sam McGee” by Robert W. Service. There is no rhythm, no rhyme, and no structure.

Apparently, the first rule of modern poetry is that there are NO rules. Just string a bunch of unrelated words together to make any meaning as obscure as possible, and divide up your sentences haphazardly.

The idea is to get the poetry editor to think “How marvelous! This poet is so deep that I don’t understand a word!” Well. of course you don’t. That is the point. Do you think the author agonized over whether sfumato is enigmatic enough, or if craquelure would be more poetic?

I like to write double dactyl poems, limericks and doggerel, each form of which has rules to follow. They aren’t “IMPORTANT” poems, but it’s those rules that make these poems fun to write. Searching for and finding the perfect word to fit the rhyme and the rhythm is what it’s all about.

If you are incapable of doing that, congratulations! You have all the makings of a modern poet.