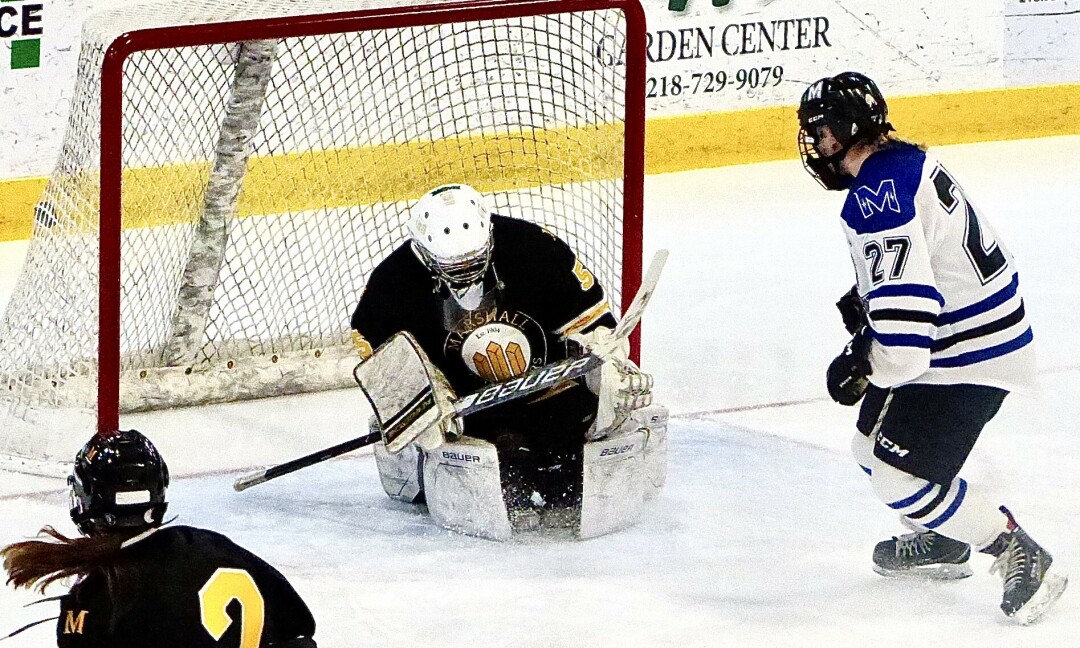 Ella Anick hit the net in a 4-goal Proctor-Hermantown third period, as the Mirage beat Marshall 6-0 for the 7A championship. Photos by John Gilbert.

This is the week that was, in Minnesota hockey. Ordinarily, we would be recovering from another in our annual state high school tournaments, and getting ready to leap headlong into college hockey playoffs, and then the NCAA tournament, the Stanley Cup waiting behind that.

It is a time where we gather with hockey-following friends and exchange memories and great historical stories about the game.

But nothing is ordinary this year. In case you haven’t followed how weird it is, the high schools are just finishing up their sectional play, and the major colleges are going to beat them with the NCAA regionals this weekend – before the state tournament.

If it seems confusing, maybe that’s because we’re not sure if the memories we’re going to make in the next two weeks can match the nostalgia we feel for years gone by in college hockey.

For example, when I first began my long career as a sportswriter focusing mainly on hockey, one of the first things I learned was how fantastic the WCHA was.

The Western Collegiate Hockey Association housed all the Western teams, and it seemed as though somebody from the WCHA – Michigan, Colorado College, North Dakota, Den-ver or Michigan Tech, most specifically – would win the post-season NCAA championship. Year after year.

Thirty-seven times, a WCHA team has won the NCAA title, despite de-partures, splintering off of teams and all sorts of disruptions, although the league, a mere shadow of what it once was, hasn’t won a national champion-ship since UMD won its first one, in 2011. Maybe thats’s fitting. 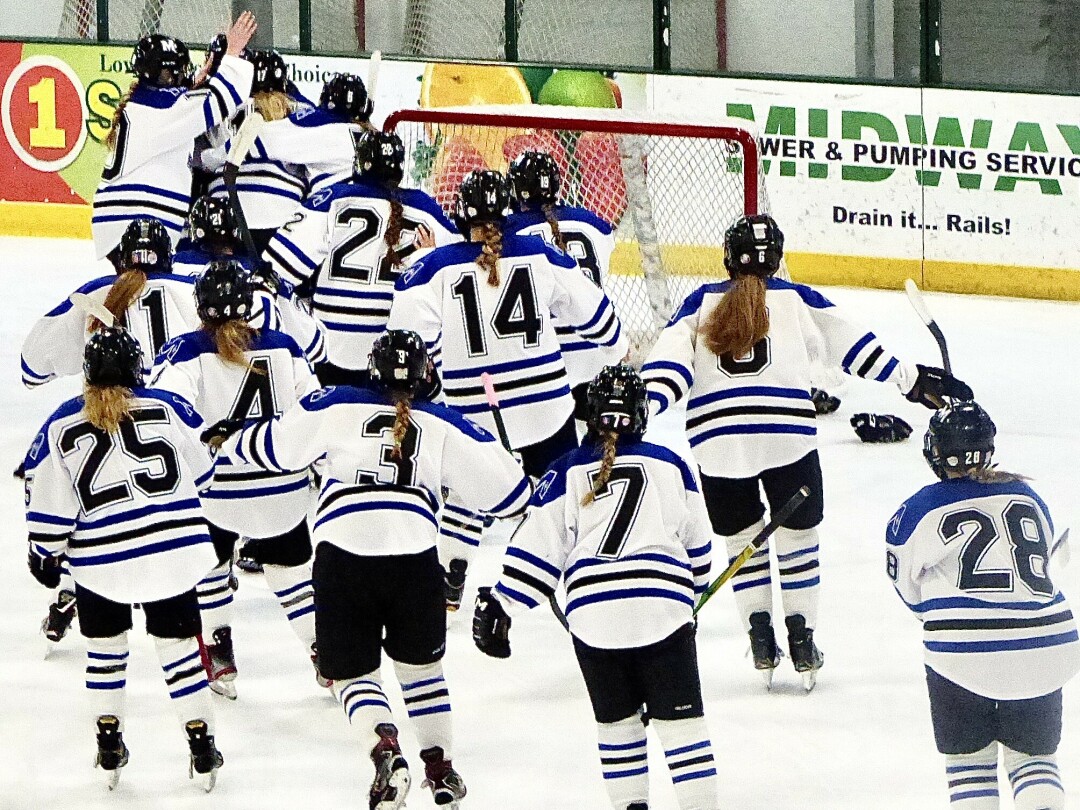 Proctor-Hermantown Mirage players mobbed goaltender Abby Pijari after she shut out Marshall to earn the team a trip to the state tournament.

In all the excitement over historically significant pairings, everybody seems to be overlooking the fact that when the NCAA tournament ends in two weeks, there will be no more men’s WCHA.

Most of the teams, apparently seeking to exclude the two Alaska schools and their most expensive trip, are starting their own league next season, much like the NCHC teams did when they broke away to form their super-conference. Their new league will adopt the once-used CCHA name.

Almost as a going-away present, WCHA powerhouse MSU-Mankato is joined by Bemidji State and Lake Superior State in the 16-team NCAA tournament. If that seems like pre-nostalgia, the rest of the field includes four teams each from the NCHC and the Big Ten, three from Hockey East, and one each from the ECAC, and one from Atlantic Hockey.

Nobody is talking much about UMD, which is just fine, because nobody talked about the Bulldogs in 2018 or 2019, and they won both of those, and were in perfect position to make it three in a row last season, when the pandemic hit, wiping out the tournament – and leaving UMD as the two-time defending national champion for two years in a row, and counting.

This Bulldog team has all the tools, and, like its recent predecessors, plays its absolute best when backed to the wall, as it is right now.

The Bulldogs will face Michigan Fri-day afternoon at the Midwest Regional in Fargo, with North Dakota’s No. 1 ranked Fighting Hawks taking on American International in the Friday night game.

Here is the full schedule:

One of the more intriguing angles is the NCHC can retain the dominance it has shown by winning the last four NCAA titles, with North Dakota claiming the 2016 crown, Denver beating UMD in the 2017 final, then the Bulldogs winning the 2018 and 2019 championships.

UMD was primed to win its third in a row in 2020, when the tournament was eliminated by the pandemic, which did a number on crowds all through the season as well.

Right now, North Dakota conceded the No. 1 national rank, which means exactly nothing from here on, when every team is 0-0. At this point, every team has scorers, playmakers, defenders and goaltenders, and the ones who can get all phases of their game together has the best chance.

The rugged competition night in and night out in the NCHC means that North Dakota, UMD, St. Cloud State and Omaha all have a decent chance to get going and win their opener. After that, anything can happen. 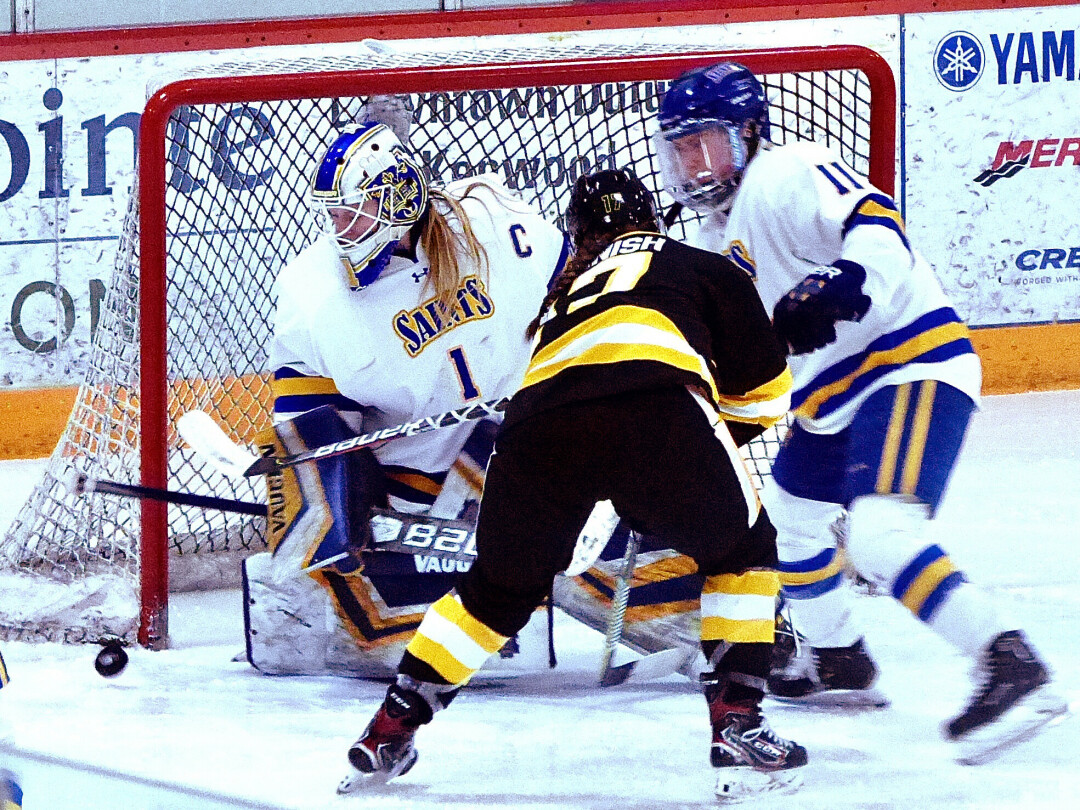 Next question is whether the Big Ten’s massive promotion and marketing can be proven accurate by a championship from Minnesota, the Big Ten runner-up and playoff champion; Wisconsin, the last-day league champion; Michigan, which has some exceptional individual talent; or Notre Dame, under the guidance of Jeff Jackson.

Add in the WCHA with its last chance to win a national title for the greatest conference in college hockey history, and you have some stirring stories among Western entries.

Of course, none of that means a thing in the regionals, particularly to the Eastern teams, led by a Boston College team loaded with high-end players and the redoubtable coach Jerry York, and potential winners lurk at Quinnipiac, Massachusetts, Boston University – anybody, actually.

The saddest story is that St. Lawrence upset ECAC champion Quinnipiac 3-2 in the overtime tournament final and gain a slot in the NCAAs. But coach Brent Brekke learned the next day that he had tested positive for COVID-19, meaning he had to withdraw his team from the tournament. That created the room that allowed Bemidji State and Notre Dame to both enter the field, instead of making the committee choose between them.

Bemidji is the third WCHA team, giving the NCAA the distinctive flavor of having all five Minnesota Division 1 teams in the same NCAA tournament at the same time.

Otherwise, well, things still were far from normal in the playoffs of the six major conference tournaments. Four of the six were won by teams other than the league champion.

Only North Dakota and its opponent, American International, won their leagues. American international, which knocked out St. Cloud State two years ago as a No. 16 seed taking out the No. 1 Huskies in the first round, was unable to play for pandemic reasons from late in January until the semifinals of the Atlantic Hockey tournament.

AIC beat Canisius to advance. Quinnipiac, playing in the 12-team ECAC, which started with four teams when eight others decided to bypass the season, then found Clarkson had to withdraw from the league tournament for violating safety rules. Quinnipiac had a bye into the finals with only three teams left, and St. Lawrence beat them – but then forfeited the chance to advance when the coach was tested positive, letting Quinnipiac back in.

It might feel like a relief for Quinnipiac to get to Loveland and take on Mankato, even with the Minnesota-Omaha winner lurking ahead. But this tournament is so deep in balanced and skilled teams that literally anybody could win. And nobody will be able to relax.

As hockey tournament normalcy goes, the stirring performance by UMD’s women – beating Colgate 1-0 in overtime before falling to No. 1 Northeastern 3-2 in overtime in the semifinals, before Wisconsin gave the national title to the WCHA, again, by nipping Northeastern in the overtime final.

Closer to home, St. Scholastica, which ran up its first undefeated season in the NCHA Division 3 conference under coach Jackie MacMillan, carried it through a two-game playoff sweep against Concordia of Wisconsin. The Saints finally met their match in the league playoff final, losing 3-0 and 3-2 to Adrian, a Michigan powerhouse that held off a stirring Saints rally through the second and third periods in the second game, after trailing 2-0 and 3-1. 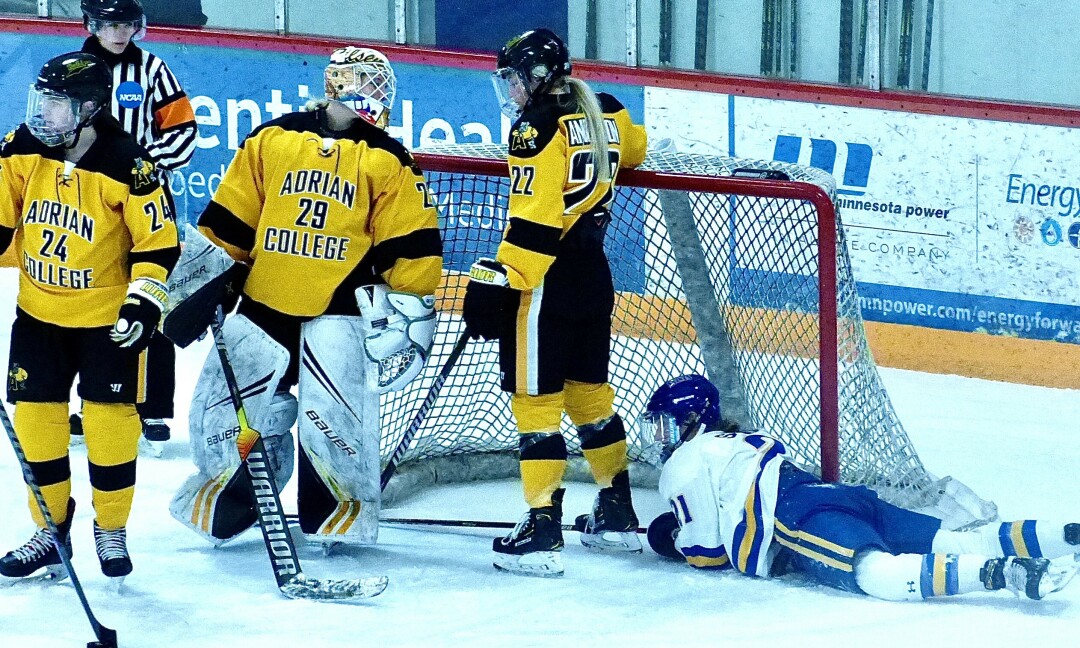 Adrian goaltender Denisa Jandova (29) earned MVP after guiding her team to a 3-0, 3-2 sweep over St. Scholastica in a battle of unbeaten teams.

Also, the Proctor-Hermantown Mirage were the first team to reach the girls Class A state tournament, beating Marshall 6-0 in the Section 7A final at Proctor.

The Mirage has great talent in depth, and could make a serious run at the state championship, playing with pride and unselfish teamwork at both ends of the rink. That’s a tribute to coach Emma Stauber, a former UMD skater.

The unusual circumstances of this season mean AMSOIL Arena is vacant of its 7A and 7AA boys semifinals and finals, as all games are at the site of the higher seed. That means Grand Rapids is at home against a powerful Andover team in the 7AA final, and Hermantown got the home date in 7A final.
Duluth East, always a threat in 7AA, had to end its season early when a junior varsity player tested positive for COVID-19 and the whole varsity team had to go into quarantine, which overlapped their final regular-season game and their 7AA opening games.

In a rebuilding season with a lot of sophomores, East might have been in position to spring an upset, by tournament time, but coach Mike Randolph has seen disappointment before, and the Hounds will be better next season.

Longtime readers of this column may have grown weary of my annual autumn raving about how the Pac-12 is the most fun major college conference to watch in football, but gets constantly overlooked by the ratings guys and the playoff committee.

Well, it apparently is worse in basketball. Tradition says that the Big 10 is the best in basketball, but it completely excluded the Pac-12 from even consideration for high rank by simply ignoring them.

So it did my heart good when the biggest stories so far in establishing basketball’s Sweet 16 were that unranked Oregon, Southern California, UCLA and Oregon State all made the Sweet 16, while heavily favored Big 10 teams like Illinois, Wisconsin and Iowa were beaten.

Maryland went down 96-77 to Alabama, which was not a big surprise, but on Saturday, UCLA knocked off Brigham Young, which was.

Fortunately, Michigan beat LSU 86-78 to give the Big Ten one Sweet 16 survivor.