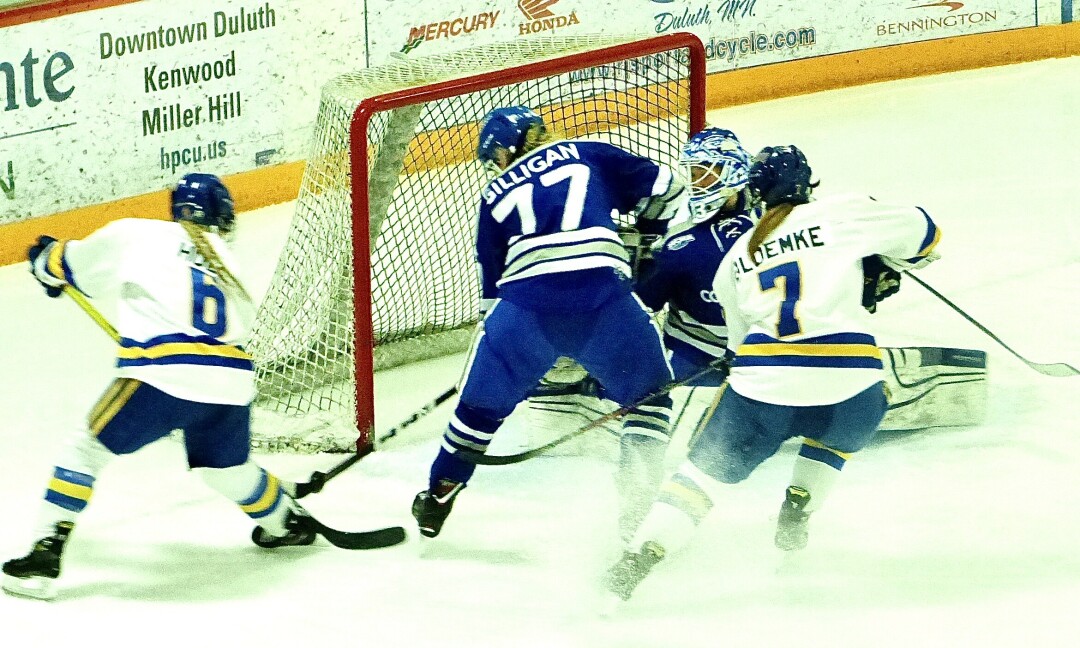 It’s been a crazy week for hockey in Duluth, with most of the news good, but some of it shocking.

The UMD men went out to Grand Forks for the NCHC tournament, feeling comfortably safe about advancing to the NCAA tournament. But it took a fantastic third-period rally to subdue Western Michigan, which was playing for its own survival. The Broncos got a goal at the end of the second period to gain a 3-2 lead, after Koby Bender’s two goals had provided the Bulldog offense.

Down 3-2 in the third, Kobe Roth scored a power-play goal to tie it 3-3 and Cole Koepke got one at 7:32 for a 4-3 UMD lead. However, Jason Polin scored with the goalie pulled for Western to tie the game with 22 seconds left and force overtime. In OT, it was up to freshman Connor Kelley, a little-used defenseman who scored from the point against St. Cloud State in the final regular-season setback, tying the Huskies with a blast from the point. Against Western, he moved to center point and when the Broncos got the corner faceoff in their end, they threw the puck up the middle — right to Kelley,. who drilled it for the 5-4 game-winner.

That victory virtually assured UMD its place in the 16-team NCAA field, which is a good thing after Monday’s semifinals, when the Bulldogs counter-punched with goals by Roth in the second and Bender in the third for a 2-2 tie, but Chase Brand scored short-handed for the Huskies with 2:52 remaining to eliminate the Bulldogs from the NCHC tournament, but didn’t snuff their NCAA intentions. The Huskies gave top-seed North Dakota a run on Tuesday, gaining a 2-1 second-period lead, but falling to a four-goal Fighting Hawks third period, including one with nine seconds left, for a 5-3 victory and the automatic NCAA slot.

Minnesota won the Big Ten playoff title, with narrow escapes over Michigan State, Michigan, and, in Tuesday’s final, building a 5-1 cushion in the second period, only to need all of it to win 6-4 with an empty-netter.

The UMD women survived a remarkable game at the Women’s NCAA tournament in Erie, Pa., battling to a 0-0 goaltending duel with Colgate that lasted into overtime, when UMD’s best player — two time all-star defenseman Ashton Bell pounced on a loose puck in the neutral zone and rushed up the right side, waiting until she got with 25 feet before firing a wrist shot that glanced in off the crossbar for a 1-0 Bulldog victory.

That sends the surprising Bulldogs into Thursday’s semifinal against top-rated Northeastern, which is 21-1-1. As they believe in themselves more and more, the Bulldogs could shock Northeastern and wind up in the NCAA championship game against a familiar foe — the winner between WCHA tournament finalists Wisconsin and Ohio State. The Badgers won that WCHA playoff final over Ohio State and beat Providence 3-0 in the NCAA quarterfinals, while Ohio State knocked off Boston College 3-1. 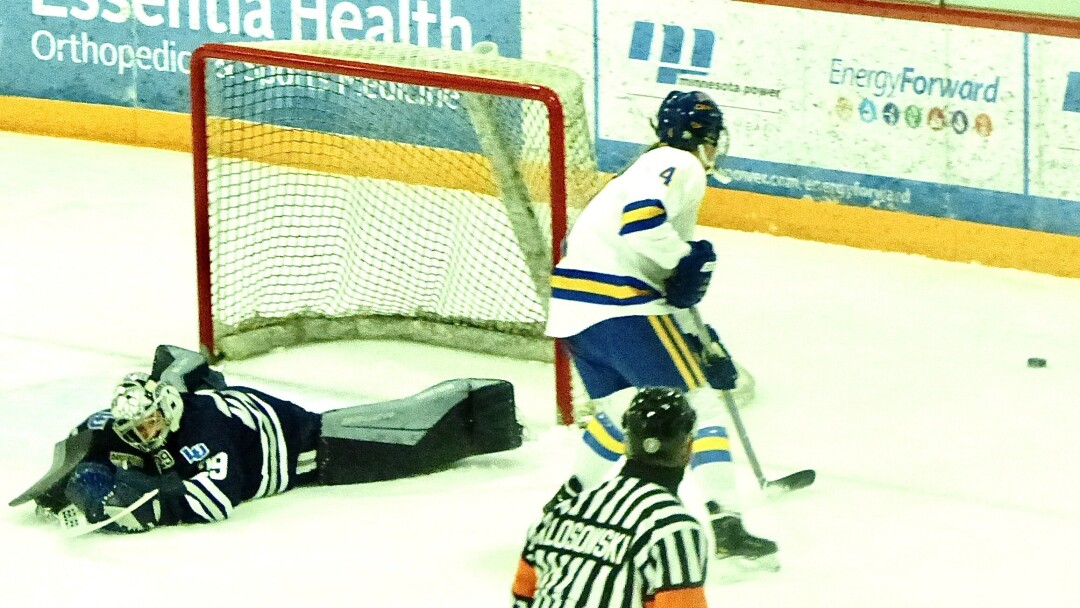 Lawrence goalie Katie Jablynski may have felt like a short nap after stopping senior Taylor Thompson, as she and her gack-up made 74 saves in the 9-0 Saints victory.

`There was more women’s hockey news at home, as St. Scholastica continues to roll undefeated through a magical Division III season. The Saints blasted eighth seed Lawrence, a comparative novice women’s hockey program. The score was 9-0 and the shots were 83-15 for the Saints, who got a hat trick plus an assist from senior Taylor Murrayand two goals from Kayla Kasel.

That put the Saints up against Concordia of Wisconsin, and St. Scholastica steamrolled through that set, too, winning 5-0 on Laurie Huseby’s shutout, as five different Saints scored in the game, and the Saints took the second game 4-1. It gets tougher now, however, as Adrian comes to Mars-Lakeview to face the Saints Friday at 7 p.m. and Saturday at 5 in the NCHA Slaats Cup championship, a two-game set followed by a mini-game of 20 minutes if the teams split the regular games. Adrian beat Aurora 7-0 and 5-1 last weekend, so the Saints might meet their match in firepower.

In one of the strangest finishes ever to a high school season, Duluth East’s perennial Section 7AA power had to end its season two games from the finish of the regular season when a Junior Varsity player was found to test positive for COVID-19. The Greyhounds had just lost 4-1 at Hermantown and the blizzard last week forced them to shift their Denfeld game from /Wednesday to Thursday.

As they were preparing for the game, coach Mike Randolph was notified that the JV player was positive, after playing against Hermantown’s JV team, and earning the chance to sit on the bench for the varsity game. He didn’t play a shift, but he was there. So East’s entire team was placed in quarantine until several days after the 7AA playoffs begin, so they had to cancel the rest of their season. Randolph has been at East 33 years, and never has had a team finish below .500 until this pandemic-shortened season, which will require an asterisk in the record book.

Against Hermantown, East’s scoring leader, Kaden Nelson, made a determined back-checking effort to overtake Hermantown’s Zam Plante, the spectacular sophomore who leads the Hawks in scoring. Plante got deep on the right and threw a goal-mouth pass for a goal, moments before Nelson hit him with a crisp bodycheck, sending him flying awkwardly into the end boards. Plante suffered a separated shoulder and a broken thumb, and is out for the rest of the season — a shame for him, for his Hawks team, and for anyone who might watch the Class A state tournament, if Hermantown makes it, because he is one of most brilliant players to come out of Duluth in a couple of decades.

Meanwhile, the Wild keep on rolling, winning with consistency and great work ethic, and if they can keep up the momentum, inspired by Russian rookie Kaprill Kaprizov and rookie goaltender Kaapo Kahkonen -- who has won nine straight games after Tuesday's 3-0 shutout of Arizona -- they could prove fully capable of winning the West Division.