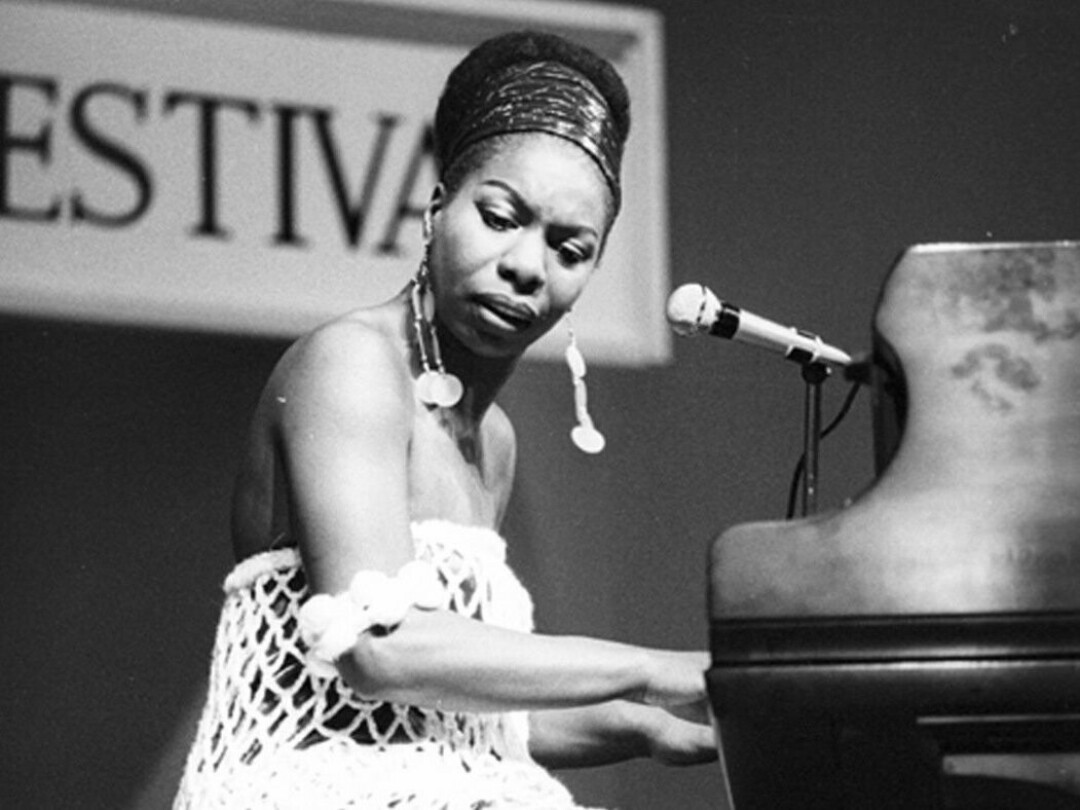 It’s the look. She takes the stage, makes a long, awkward bow to the audience, rises, and in silence stares at them as they no doubt are staring at her. And in that stare, there is something that looks angry and lost, as if this creature is from another world thrust into this ugly human place, and she does not understand it.

The scene is Nina Simone’s entrance at the 1976 Montreux Jazz Fest, where she came out of a self-imposed eight-year exile to perform again, and for a moment, before she takes a seat at the piano that she will soon dominate, she seems to be asking herself why she does this to herself. You can see there is major soul searching going on.

And then she sits down to play and she is in her element and able to smile.

“What makes me happiest is when I am performing,” Nina Simone admits at one point in the beautiful and controversial 2015 documentary "What Happened, Miss Simone?"

What is controversial about it?

Some say her abusive husband/manager Andy Stroud has too much to say about her life. Some say director Liz Garbus blurred the line between genius and mental illness in telling Nina Simone’s story.

I say it’s an amazing documentary about a giant musical spirit I was happy to learn more about.

Eunice Waymon had a childhood dream of stunning the world as the first black female classical pianist to play Carnegie Hall. She apparently had the talent to achieve that, but, as she was told, her nose was too big, her lips too full and her skin too dark to be the person she wanted to be.

Eunice had been recognized as a musical prodigy and started playing church revival meetings at a young age. She had her first piano recital at the age of 7, where she amazed a white piano teacher who would take Eunice under her wing for the next five years and start a fund to further her education.

“She started me on Bach, and this Bach, I liked him,” she said.

But to do all that, Eunice had to cross to the other side of the tracks where the whites lived, and enter an entirely alien white world. Then she would return home and practice in isolation.

“I became terribly aware of how isolated I was from the other children,” she says.

After five years with her piano teacher, Eunice moved to New York City to study at the at the Julliard School of Music.

“I studied to become the first black classical pianist in America,” she said. “That was all that was on my mind. That is what I was going to be.”

Then, in order to help fulfill that dream, she auditioned for the prestigious Curtis Institute of Music in Philadelphia.

But she was turned down, she decided, due to race.

“I never really got over the jolt of racism at that time,” she said.

That was the beginning of the end of Eunice Waymon’s dream for her life, and just the beginning for her reinvention as Nina Simone.

Giving up on academics and feeling that she was responsible for the family that had followed her to Philadelphia, she took a job playing piano from midnight to 7 am at what she describes as a “a very crummy bar,” the Midtown Bar & Grill in Atlantic City. Not wanting to let her mother know that she was playing “devil’s music,” she performed under the exotic name Nina Simone.

Her boyfriend at the time called her “nina” – little one – and the exotic last name she took from French actress Simone Signoret.

Her first night at work, she played everything she knew, throwing in gospel spirituals with classical works.

On her second night at the bar, the owner told her if she wanted to keep her job, she better add vocals to her pianistic abilities. Thus began the blues/soul/jazz career of Nina Simone.

“Ever since then, I’ve been singing,” she says.

Jazz impresario and founder of the Newport Jazz Fest George Wein has nothing but good things to say about Nina Simone, when she played his club, Storyville in Boston, in 1957.

“I was impressed. She was different,” he says. “She mixed in folk music with jazz. She played very fine piano. Her voice was totally different from anybody else. It was a woman’s voice, but it had the depth of a baritone. That depth and darkness carried the insight of what was in Nina’s soul and it reached you very quickly.”

She was a hit at the 1960 Newport Jazz Fest, and we got to see why with a clip of her leading the band in a rousing version of the traditional “L’il Liza Jane.”

Her longtime guitarist and musical director Al Shackman said when he first met her at a gig in 1957, she wouldn’t even look at him. But as they performed together, they found they had a telepathic communication.

“Nina had a wonderful way of taking a piece of music and not interpreting it, but metamorphisinzing it, morphing it into her her experience,” Schackman says.

Yes, her songs – whether her own or covers – are the most personal songs you will ever hear. But they are also highly sophisticated. As one contemporary reviewer noted, she added “fugue and counterpoint to the freewheeling spontaneity of jazz.”

You get a real feeling for what Shackman means with several of the performances the documentary presents throughout her career. Songs that have been interpreted many times by others sound like brand-new music under her direction.

And sometimes she wants to tear the audience a new one. The documentary gives us a couple of examples of how Miss Simone would brook no nonsense from audiences, in one instance repeatedly telling a woman to sit down in her seat. She was known to walk out on audiences if they annoyed her.
Her daughter, Lisa Simone Kelly, executive producer of the movie, ex-plains that the anger and depression in her mother was largely due to undiagnosed bipolar disorder.

I never had the opportunity to hear Miss Nina Simone on the radio when she was in her prime and I was growing up a music fan in Duluth. That’s because she was blacklisted from mainstream radio for radical views she expressed during the civil rights movement. Though close to Martin Luther King Jr., she told him she didn’t believe in his nonviolent ways. She believed racist violence should be met with violence, and said so on stage.

She became, according to jazz critic Stanley Crouch, “a kind of patron saint of the rebellion,” which only removed her farther from mainstream audiences.

“All of a sudden I could let myself be heard about what I had been feeling all the time,” she says about her civil rights activism.

She eventually went into exile in Europe and Africa, divorced her abusive husband, struggled to make ends meet singing in small clubs, and eventually returning to the limelight with appearances at major festivals and clubs.

Later, when I started collecting vinyl, I would occasionally see Nina Simone records, but I didn’t know enough about her to pick them up. Wish I had now.

These are among the fascinating things we learn in this amazing documentary, which debuted at the Sundance Film Festival in 2015.

It’s hard to imagine another docu-mentary that reaches so deep into a subject’s soul as this does with Nina Simone, who struggled with all the big concepts of life in 20th century America – race, sexual politics and simply being a talented human being in her particular moment in time.

Ultimately, it is the story of a survivor. As daughter Lisa Simone Kelly says in the documentary: “My mother was one of the greatest entertainers of all time. Hands down. But she paid a huge price,” Lisa says in the documentary. “People seemed to think that when she came out on stage, that was when she became Nina Simone. My mother was Nina Simone 24-7. And that’s where it became a problem.”