Which UMD teams will show up at tournaments? 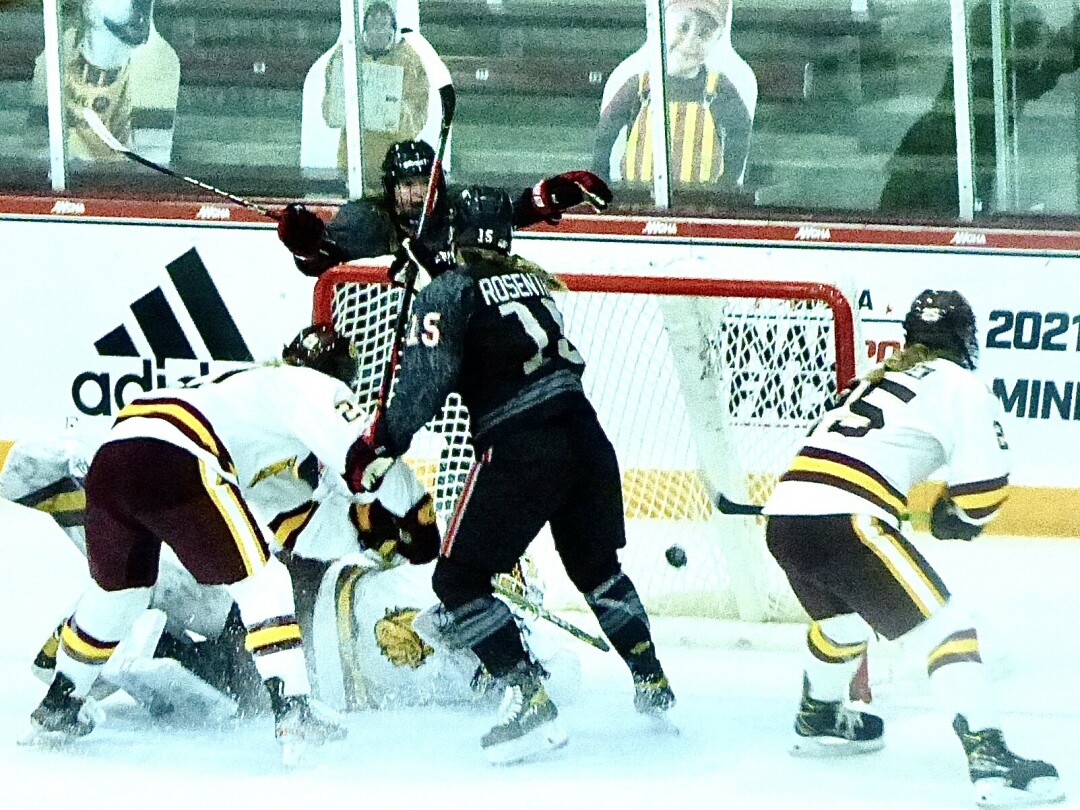 Ohio State’s Gabby Roesenthal scored at 3:40 of the second period for a 3-1 lead that became a 7-2 UMD loss. Photo by John Gilbert.

What an incredible week it was for sports fans in the Northland, with excitement, hotly competitive games, controversy, disappointment, and great anticipation for even more of the same this weekend. We have to compartmentalize it all to get it in:

* UMD men’s hockey: This Bulldog hockey team is equipped to win its third consecutive NCAA hockey championship, when it’s hitting on all cylinders. The question is, which team will show up in Grand Forks for the NCHC tournament Friday through Monday? Will it be the team that was so excellent in whipping St. Cloud State 5-1 two weeks ago, or the team that wasted one bewildering, ineffective, have-these-guys-ever-met-before period before starting to play? We all knew St. Cloud State would come roaring out of the dressing room in last Saturday’s rematch at the Herb Brooks Hockey Center in St. Cloud, and the Huskies did. racking up goals by Chase Brand, Jamie Krannila and Veeti Miettinen for a 3-0 head start in the first period. Krannila and Miettinen are two players from Finland, who were noticeably missing from the scoresheet in Duluth one week earlier, but flashed their speed and prowess back home.

Outshot 20-8 in that first period, it seemed UMD was conceding second place to the Huskies. But then the second period began and the Bulldogs stalked back into the game. with Jackson Cates getting two goals, one on a deflection of Kobe Roth’s open chance from the right edge and the other on a clean deflection of Kobe Bender’s hard feed from just inside the blue line to the slot. Suddenly 3-2, the deficit was more manageable, and defenseman Connor Kelley chose the perfect time to score, with a missile from the right point, through traffic and inside the right post. Having made up the big goal and shot deficit, momentum favored UMD, but when the 3-on-3 overtime began, Gordon Walker rushed the length of the ice on the left, circled behind the net, and fed to the crease, where Easton Brodzinski scored at 0:18.

That means instead of facing Miami, no easy task, the Bulldogs instead get Western Michigan — definitely not an easy foe — in Saturday’s 7:30 game, the fourth of the NCHC quarterfinals. A loss could leave UMD on the bubble for making the NCAA tournament, or having a bubble that has popped.

* UMD women’s hockey: UMD coach Maura Crowell and her top players all said the right things before their trip to the WCHA Women’s tournament, called the Frozen Faceoff. And they hit the Ridder Arena ice in good form, outshooting Ohio State 9-5 in the first period, and getting Katie Davis to speed off on a breakaway to score her first goal to offset the Buckeyes’ early 1-0 lead by Emma Maltais. The second period of that game also featured a dramatic turnaround, like nothing we’ve witnessed before. The Buckeyes scored twice, 1:20 apart, in the first 3:40, and the Bulldogs buckled. Ohio State went on to score five goals in the second period, outshooting UMD 17-7, and sending all-WCHA goaltender Emma Soderberg off for relief in what became a 7-2 loss. A crushing outcome that put UMD’s hope for an NCAA berth in serious jeopardy.

Ohio State lost an intense final to Wisconsin, which had beaten Minnesota 5-3 with an empty-net goal. Sunday the NCAA selection committee, which included four representatives from Eastern colleges and only one — UMD athletic director Josh Berlo — from the West. The question was whether the committee would pick four teams from the WCHA, the nation’s dominant league, or three? The answer was three. The surprise, if you listen to the critics, was that the team that was left out was Minnesota, which, some say, should have been included instead of Providence, a third Hockey East team at 12-7-1 behind No. 1 ranked Northeastern (20-1-1) and Boston College (14-5).

But in reality, the decision came down to which would be the third WCHA team, UMD or Minnesota? In that light, the surprise is not that UMD got in, although that 7-2 thrashing by Ohio State may have exposed some serious shortcomings, but that the Gophers were left out. The WCHA is a league where the Ohio State has crowded the usual top two of Wisconsin and Minnesota, while the bottom three, Bemidji State, St. Cloud State, and MSU-Mankato seem stuck there. UMD is between the two segments. A team’s success can be greatly measured by when they play the top teams. Minnesota played them down the stretch, and struggled against Wisconsin and Ohio State. But they came to Duluth and beat UMD in November in a fast, entertaining series, but a Gopher sweep nonetheless. If it came down to those two, the head-to-head sweep by the Gophers seemed unavoidable.

UMD, on the other hand, had pandemic cancellations that came at just the right time to allow them to miss a series at Minnesota and another series at Wisconsin. They split a great series with Ohio State at AMSOIL Arena, but the Bulldogs finished second quite plausibly because they avoided four potential losses to the Badgers and Gophers, so strength of schedule was also solidly in Minnesota’s favor when compared against the Bulldogs. UMD battled and scuffled, splitting two 1-0 games at Bemidji State and needing near-miraculous finishes to get past Mankato on the next-to-last weekend. and it was a battle to be ranked anywhere from sixth to 10th all season. Minnesota never ranked lower than No. 5. UMD finished second by percentage, thanks to going 9-1 against the bottom three and only 2-5 against their top three league foes, while the Gophers ranked second in points from playing more games, and were always ranked ahead of the Bulldogs.

But the committee, somehow, looked beyond UMD’s shortcomings in weakened schedule and the Final Faceoff flop, to the strong regular-season finish, and chose the Bulldogs. Now the question is, which UMD team will show up?

In the NCAA tournament, being held at Erie, Pa., home of Mercyhurst, No. 1 Northeastern will play Robert Morris, No. 2 Wisconsin faces Providence, Boston College meets No. 3 Ohio State, and UMD takes on No. 4 seed Colgate. So along with getting into the field, the Bulldogs must rank as favorite against Colgate, which is clearly the most beatable of the top four seeds. If Emma Soderberg regains her form, and if the Gabbie Hughes-led offense can reignite, UMD could make a serious bid. If they advance, Northeastern looms in the semifinals, while it is quite possible Wisconsin and Ohio State could meet once again in the other semi.

* St. Scholastica men’s basketball: Coach David Stanger has put together a team the Northland can be proud of. Instead of recruiting from far and wide, his Saint Scholastica Saints men’s team is entirely from the North Country. And the Saints dodged tough opponents and the COVID-19 pandemic through an undefeated run in their final year in the UMAC before moving up to the Minnesota Intercollegiate Athletic Conference next season. The unbeaten string was snapped, only Monday night, by Northwestern College of Roseville in the UMAC playoff championship game. Instead of going out with the title, Northwestern’s Eagles won it…again.

The Saints were not at their best, Monday night, but still they led for almost the entire first half. Driving hard and hitting some threes, the Saints fell behind 34-33 at the half, shooting 44.4 percent from the floor, including 42.9 from 3-point range, where they hit 6 of 14. But in the second half, Northwestern pulled away as the Saints shooting fell to a meager 35.5 percent to the Eagles’ 54.2 percent, and lost 74-61.For the game, St. Scholastica shot 39.7 percent to Northwestern’s even 50 percent. Northwestern’s Noah All scored 24 and Kyle Kaemigk added 18 with Owen Boerema getting 11, while the Saints Nick Carlson led with 14, Cade Goggleye had 11, and Jack Silgen and Quinn Fischer had 8 each.

But the Saints only lose one senior, Jerod Wilken, from this year’s team and will be a force next season, in the MIAC. Check out the players who played in the final: Wilken, the senior, is from Annandale, Jack Silgen is a 6-6 junior from Crosby-Ironton, Cade Goggleye is a 6-1 sophomore from Nett Lake, Quinn Fischer is a 6-5 junior from Esko, Nick Carlson is a 6-4 jiunor from Canyon, Isiah Hendrickson is a 6-3 sophomore fro Duluth East, Connor Bich is a 6-7 sophomore from Hermantown, Noah Winesett is a 6-1 freshman from East, Craig Burger is a 6-1 sophomore from Hayward, and Jeff Moore is a 6-7 sophomore from Richfield. They can all run, play defense and rebound, and if they can spend the summer shooting, the Saints will be fun to watch.

* UMD women’s basketball: Off to the Division II Central Regional, the 13-1 UMD women’s basketball team takes on host Emporia State (18-6 Friday, right after St. Cloud State (12-5) faces Central Missouri Staste (19-4). Winners advance to play in the semifinals, the UMD winner against Nebraska-Kearney, and the St. Cloud State winner going against No. 1 seed Fort hays on Saturday. The championship is Monday, at 6 p.m. The Bulldogs, led by Brooke Olson and a solid supporting cast, have a genuine shot at winning the regional.

* Mark Pavelich: The tragedy of the week was when the news of Mark Pavelich his us right in the midsection. The sensational Eveleth star center who was All-American at UMD and a rally-starter for Team USA’s 1980 Gold Medal hockey team, was found dead in his room early this week at the Eagles Nest treatment center in Sauk Rapids, where he was undergoing treatment. It is a tragedy that has stunned all who knew him. We can best recall his colorful playmaking, and the wonderful pranks he pulled at UMD. One of the best was when he went partridge hunting and wounded a bird. When he found it was still alive, he carefully put it in a sack and brought it to UMD hockey practice. The story was incorrectly told in the Minneapolis Star Tribune, which said he put it in teammate John Rothstein’s locker. Mike Sertich, coach at the time, said: “That was wrong. We didn’t even have lockers in our dressing room. The players had cubicles, and the only locker in the area was mine, in my office. And that’s where he put the partridge.” When he opened his locker, the bird fluttered out, completely shocking the coach.