No Seuss for you! 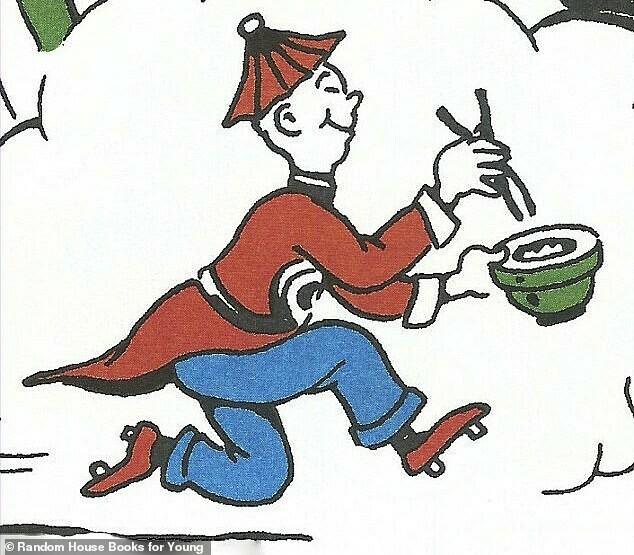 This image of a smiling Oriental with chopsticks is the reason Theodore Geisel’s first children’s book written as Dr. Seuss in 1937, And to Think That I Saw It on Mulberry Street, will no longer be published. It is one of six Dr. Seuss books pulled from publication due to “hurtful” images.

You know, that’s not a bad philosophy of life. And no one has to tell you who wrote those words. Of course they are by the world’s most famous author, Theodore Geisel, aka Dr. Seuss.

Who doesn’t have fantastic memories of spending time in the uniquely individual worlds of Dr. Seuss, where image and wordplay had equal footing in nimble young minds?

I probably saw my first Dr. Seuss book in 1960, and quickly became a fan. Already there were a bunch of them. By then, he’d been at it for 23 years. His first book published as Dr. Seuss, And to Think That I Saw It On Mulberry Street, was published in 1937.

Because that was the very first published book of his lengthy and momentous career, I was sad to hear Mulberry Street was among the six Dr. Seuss books banned on March 2 – Geisel’s birthday, usually a day to celebrate the literacy he promoted.

The ban was self imposed by Dr. Seuss Enterprises, the organization that manages the empire the good doctor left behind in 1991 when he shuffled off to that place where Truffula trees will always grow.

Mulberry Street and the five other banned books are no longer suitable for publication because, as Dr. Seuss Enterprise said in the press release issued to announce the decision, they “portray people in ways that are hurtful and wrong.”

Mulberry Street’s offending image is the depiction of the Oriental man who we show on this page. Yes, it is a stereotype, but, in the context of its time, it could have been much worse. And it’s there in praise of diversity, not to disparage those who are different from us.

The beloved Dr. Seuss is being banned for the very cartoonish characters that made him so popular, shorthand visuals that in 1937 he could never have foreseen would one day cause the banning of his very first book.

I would love to read the book he would write about that! Sneeches, indeed!

I must admit that I am not familiar with the five other titles that are being banned. However, I do feel I know the spirit of the man behind Dr. Seuss, and it is a good spirit.

As a child, I certainly understood the difference between an artist’s vision of the world and the world itself. Hell, when I was reading him as a kid, I knew the author behind Dr. Seuss was something of a fuddy-duddy from another more conservative time and not necessarily in tune with my young and more progressive views. But, when he had a message, his message was pure and good.

If Dr. Seuss and his many books promote principles we believe are good for developing minds (and I believe they are a great stepping stone for young learners of many bents), aren’t we 21st century minds wise enough to understand that some of his views are of his time, and, so, we are looking at a moment of our cultural history in aspic.

Does this moral hindsight cleansing really make the world a better place when we all know racism and hatred still exist?

Banning Dr. Seuss is not the path to a better world. It smacks of the revisionist history of George Orwell’s 1984. And if we can ban Dr. Seuss, who is next? Where does it stop?

But that’s just me.

What do you think about banning Dr. Seuss? Let us know at info@readerduluth.com.

“And that is a story that no one can beat
And to think that I saw it on
Mulberry Street.”