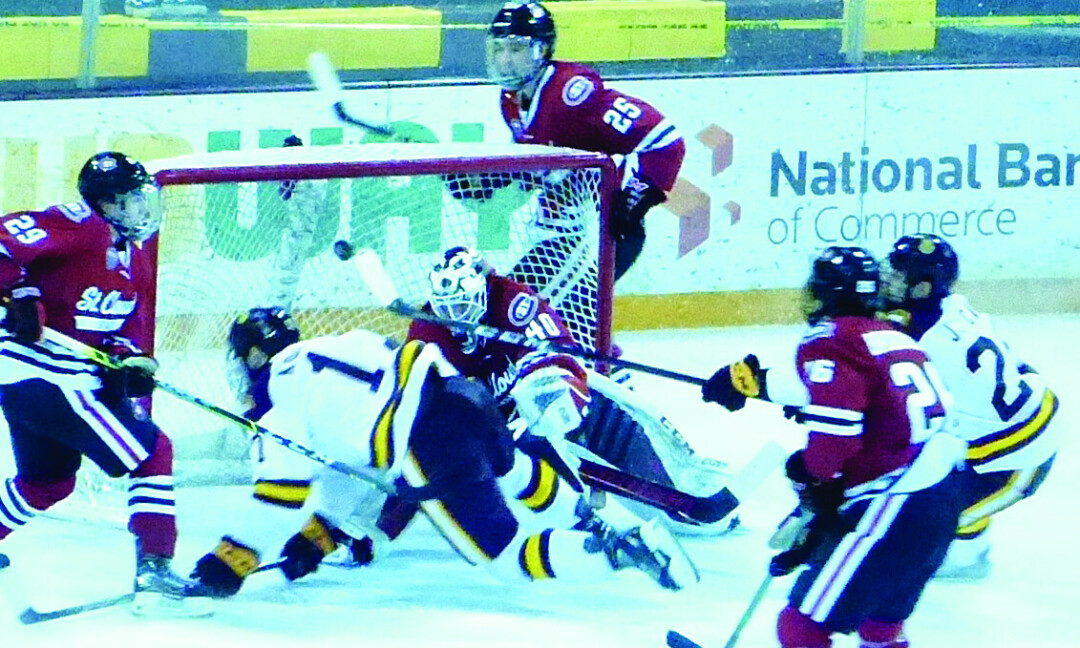 UMD was scoring so fast nobody could tell who got the goals! Kobe Roth got credit for making it 3-0 in the first period, but the camera caught Jackson Cates getting his stickblade on the puck to deflect it in as Cole Koepke sprawled at the crease. Photos by John Gilbert.

If the end of the AMSOIL Arena college hockey season can provide so many highlights, what can we expect from the playoffs?

The UMD women played their best game in coach Maura Crowell’s six years as coach when they stunned No. 1 ranked Wisconsin 4-2 last Saturday afternoon, and it wasn’t an upset. The Bulldogs traded rushes and big plays throughout the game, as Gabbie Hughes continued her spectacular stretch-run hot streak with two goals.

That victory was Crowell’s 99th in six seasons, and put UMD in position to catch the first-place Badgers in Sunday’s season finale, Saturday afternoon.

Daryl Watts, the top scorer in the league, scored her second of the night and 15th of the season at 0:41 of a 3-on-3 overtime to sink the Bulldogs 4-3 and claim the title, while UMD took second.
Unlike the first game, in which the shots were 28-28, the Bulldogs had to rely on sophomore goaltender Emma Soderberg’s brilliance because they were outshot 49-19 by the Badgers.

Gabbie Hughes, meanwhile, scored two more goals in the game to establish the 1-0 and 2-1 leads, giving her 10 goals for the season – 9 of them in the last six games after scoring 1 in the first 10 outings.

The result of going by percentage means UMD will face third place Ohio State at 5 pm Saturday at Ridder Arena on the Minnesota campus, after prime rivals Wisconsin and fourth-place Minnesota collide at 1 pm. The championship is Sunday at 2 pm.

While providing the best entertainment of the season in the final women’s series, AMSOIL was also the scene of the UMD men’s final home game, against a St. Cloud State team that had swept a pair of games from UMD on the same ice, 4-3 and 1-0 in an overtime classic, back on Jan. 8-9.

That was one week after the teams had split two games in St. Cloud. This final series is home and home, with the second game in St. Cloud pushed ahead a week to this Saturday, so the teams won’t have a weekend off before playoffs next week.

The Bulldogs answered the call of Senior Night by having seniors score all the goals in a 5-1 victory over the Huskies that saw Nick Swaney score a hat trick, and Koby Roth and Kobe Bender each score once.

It was, arguably, UMD’s best single game performance of the season. 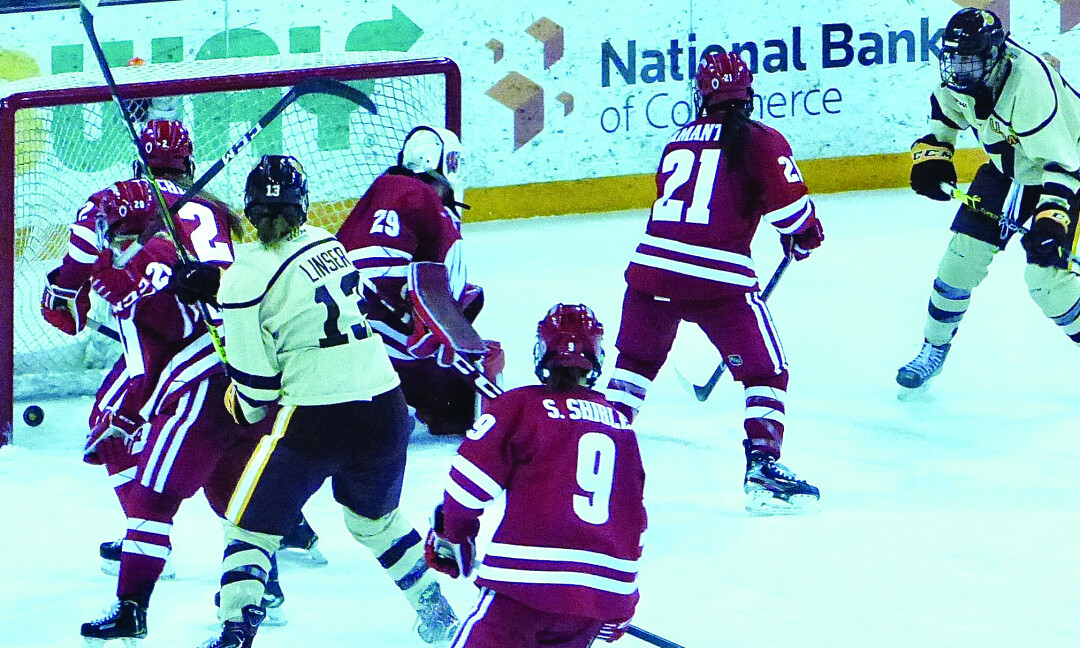 UMD’s Gabbie Hughes (17, far right) put the puck into the Wisconsin goal in Friday’s 4-2 victory over No. 1 Wisconsin.

Stricken with a goal-scoring struggle at the worst possible time, the Bulldogs erupted for goals by Swaney at 11:43, Swaney again at 14:27, and Roth from Bender at 16:05, shocking the Huskies with a 3-0 lead and a 13-4 edge in shots in the first period.

When Zach Okabe got a power-play goal for St. Cloud State in the second period, Swaney scored his third of the night and 13th of the season at 13:38. Freshman Zach Stejskal got the call in goal and stopped 24 of the 25 Huskies shots, and Bender’s empty-net goal was a work of art, thanks to Roth, who broke in with Bender on the open goal. Roth, who is from Warroad, could easily have converted his second of the game and 12th goal of the season, but instead he moved the puck to Bender, who is from Cloquet.

“My goal came after a great pass by Bender,” said Roth. “Every time we’re on the ice together, he puts the puck on my stick, so I thought I’d set him up on the open net.”

Sandelin said he took time to talk to his juniors and seniors.

“They’ve been through this before,” Sandelin said. “When they came here, we had players who showed them the way, and now they have to be the leaders for our younger guys. Nick Swaney has been a good leader, and tonight he was great.”

Swaney, who reached 100 career points with his hat trick, said his first goal went in off his skate, so sometimes a little luck helps, too.

“They have speed and skill, and we were coming off a 3-game losing streak. That’s not the way we want to play. So we worked all week on getting back to Bulldog Hockey.”

The season finale at St. Cloud will be a good test for the NCHC playoffs next week.

At 13-8-2, UMD is a point behind St. Cloud’s 14-9 record. A Bulldog victory means the No. 2 seed behind North Dakota and would alter first round pairings for the tournament, at Grand Forks.

Interesting that when UMD lost 2-1 to Colorado College and outshot them 43-14, they dropped from sixth to 10th in the national ratings. Yet when they whipped a higher-ranked St. Cloud State decisively in last Saturday’s 5-1 game, they only moved up one spot, to ninth.

A victory in St. Cloud should boost them more, and then there’s what promises to be a wild single-elimination NCHC tournament.

The women can’t wait, although their split with No 1 Wisconsin lifted them to fifth, behind Northeastern, Wisconsin, Minnesota and Ohio State, giving the WCHA four of the top five in national ratings, but success in the league tournament may be pivotal for an NCAA berth.

The impact of Hughes regaining her scoring touch can’t be measured. The first seven minutes of the second game were scoreless, then Makenna Webster broke free and came flying in at Soderberg, who calmly made the save.

Mere seconds later, Hughes got the puck on the left side, turned the defense and cut in front to score at 7:07. After Watts tied it 1-1, Taylor Anderson rushed in on the right and dropped a pass to Hughes, who partially fanned on her shot – a rarity – but as the puck slid slowly toward the net, Hughes overtook it and deflected it in for a 2-1 lead. 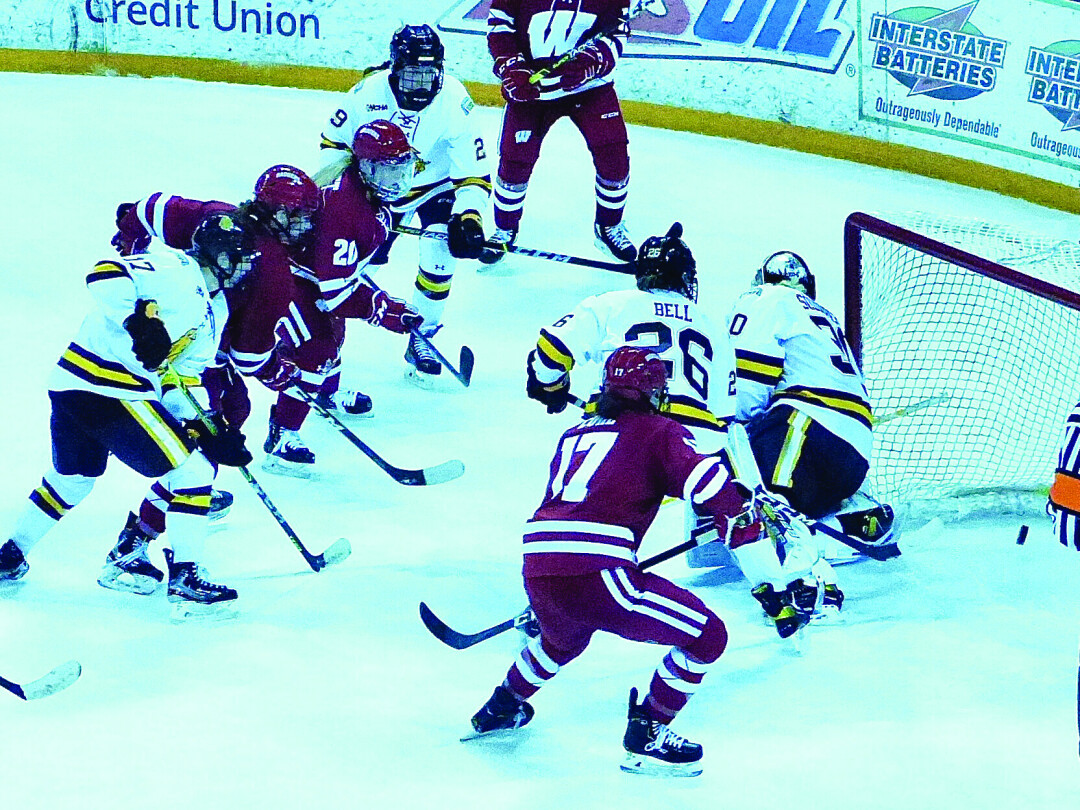 That was despite Wisconsin out-shooting UMD 26-9 at that point. Anna Klein added her team-high 11th goal to make it 3-1, before the Badgers turned up their pressure even more and made their rally.
Post-season tournaments bring back the harsh reality of the first anniversary of when the COVID-19 pandemic, which was belatedly recognized in the U.S. and caused cancellation of the men’s and women’s NCAA tournaments.

That cost UMD the chance to defend its two NCAA men’s championships in succession, although they are still the “two-time defending national champs.” And could take a run at making it three in a row this spring.

The UMD women’s basketball team is already secured in the NCAA Division II tournament, having won the Northern Sun tournament last weekend. The Bulldogs, cruising along undefeated atop the Northern half, lost 60-49 on the final weekend of the regular season, when junior standout Brooke Olson did her usual scoring thing, scoring 22 but getting surprisingly little support.

Ann Simonet, for example, was 0-for-7 from the floor and scored only two free throws. UMD bounced back the next day in the rematch, then went to Sioux Falls for the league tournament.
UMD beat Sioux Falls 78-64 as Olson scored her career-high 31, Simonet added 11, Maesyn Thiesen and Payton Kahl 10 each.

UMD beat Bemidji State 76-67 in the semifinals as Olson scored 25, and Simonet 18. That sent the Bulldogs back against St. Cloud State for the title, and the Bulldogs won 67-55 as Olson was held to 15 while Simonet led the Bulldogs with 17, land Sarah Grow added 10.

Simonet, who couldn’t make a single bucket in the loss to St. Cloud at Romano Gym, was 5-for-7 in the final, while Olson was 7-for-11.

It will take that sort of balance for the Bulldogs to make some noise in the regional D-II tournament.
Former UMD hockey coach Mike Sertich will be given the 2021 Hobey Baker Legend of College Hockey award, at this year’s presentation of the Hobey Baker Award for the outstanding U.S. college hockey player.