Shining a light on curiosity 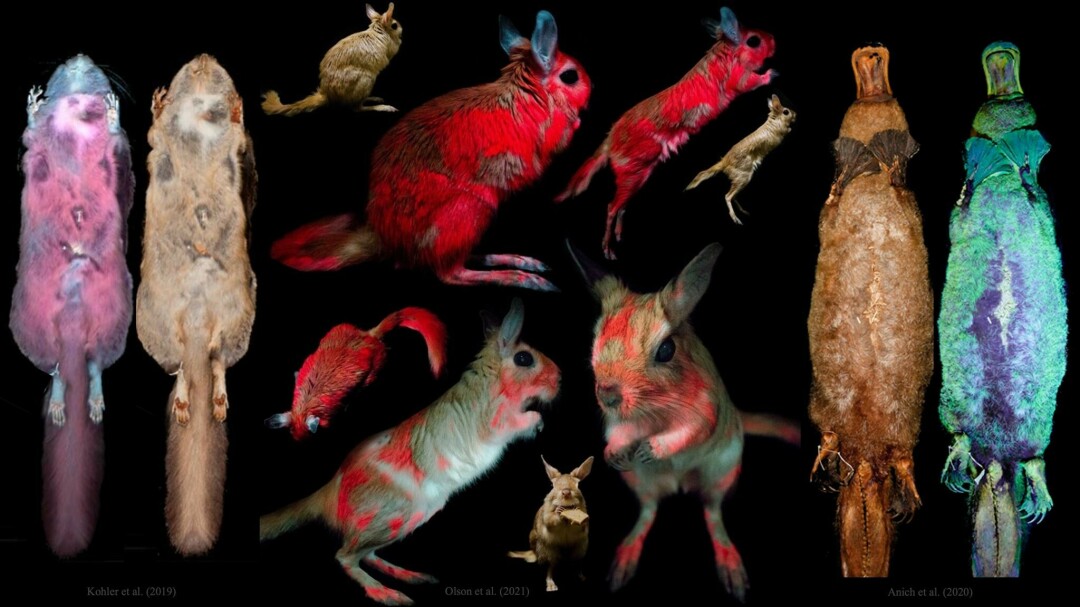 Once upon a time, in the cool, dark air of his own backyard, a forestry professor swept the beam of a UV flashlight through the trees. He wanted to know if gray tree frogs fluoresce. They don’t.

But when a furry shape found its way into the beam and glowed hot pink, Jon Martin discovered that flying squirrels do.

This serendipitous discovery in May of 2017 – spurred on by a bit of previous knowledge and a scientist’s curiosity – sent Jon (a professor at Northland College in Ashland, Wisconsin) and his colleagues on quite the scientific journey.

In 2018 and 2019, faculty from Northland College descended into the collections of the Field Museum of Natural History in Chicago to examine the flying squirrel specimens stored there. The interdisciplinary team was determined to learn more about Jon’s discovery that flying squirrels fluoresce under UV light.

After shining their UV flashlights at specimens of all three species of North American flying squirrels and being rewarded by flashes of pink, the next question was “what else?” Previously, opossums were the only mammals known to fluoresce. But, opossums are weird. And although their fluorescence was discovered in the 1980s, no one, it seems, dug much deeper. Where was their sense of curiosity?

The Northland College crew was curious. Would the startling trait be common among other furry critters? As it turns out, platypuses (who are even weirder than opossums) biofluoresce, too, and the Northland scientists published that discovery last October.

During their black light safari through the collections, the scientists logically sought out the cabinet that held Old World flying squirrels, who live in Europe and Asia, as well as “scaly-tailed squirrels,” who aren’t squirrels at all, but small rodents from central Africa with a similar stretch of skin and ability to glide. No glow for the scaly-tailed squirrels. The scientists really didn’t expect EVERY species to fluoresce, acknowledged natural resources professor Erik Olson, as he recapped the story for me recently.

But as the next drawer in the cabinet slid open, flaming orange fluorescence flickered under the flashlight’s beam. “We’ve got one!” someone exclaimed, without even knowing exactly what the drawer held.

The specimens were of African springhares, as it turns out. That discovery was just published in the journal “Scientific Reports.” The authors include Jon, Erik, and also Northland College chemists Michaela Carlson and Sharon Anthony, mammologist Paula Anich, and microbiologist Alissa Hulstrand, among others.

Springhares, I’ve learned, are rabbit-sized rodents who leap like kangaroos, but lack a pouch. They are close relatives of the scaly-tailed squirrels, which is why their drawer was nearby. They live only in Africa, where they forage under the cover of darkness and not much else; not even with friends to help keep an eye out for danger.

On a field trip to the Henry Doorly Zoo in Omaha, Nebraska, the team confirmed that living springhares fluoresce even more brightly than the decades-old specimens. Erik also noted that the springhares – both living and dead – glowed much more vibrantly in person than in the published photographs, where the researchers’ careful, scientific process had captured a narrower range of wavelengths.

There is much left to learn about biofluorescence in mammals. Describing the trait is just the first step, but figuring out what the trait means is quite another process. Does it have ecological benefits? Is it a disease response? Might it be useful for conservation? Or could it possibly have no purpose whatsoever? It will take a bevy of scientists from different disciplines to begin to answer those questions.

“To me it’s just exciting to be part of the description of a trait that was unknown.” Erik told me – especially since the animals themselves are all common and well-studied. “These kinds of discoveries really enhance the sense of awe we have for the natural world; they give us a moment to pause and reflect on the world around us.”

Erik was initially skeptical and cautious when Jon told him about the pink flying squirrels in his backyard. Jon wouldn’t give up, though, and the rest is history. The rest has also been covered in the “New York Times,” published in the “Journal of Mammalogy,” and has captured the imaginations of both scientists and the public.

And it all started … once upon a time … with a particularly persistent forester who let his curiosity run wild in his own backyard.

Emily Stone is the Naturalist/Education Director at the Cable Natural History Museum. Her award-winning second book, Natural Connections: Dreaming of an Elfin Skimmer, is now available to purchase at cablemuseum.org/books.