Dr. Frankenstein does it again 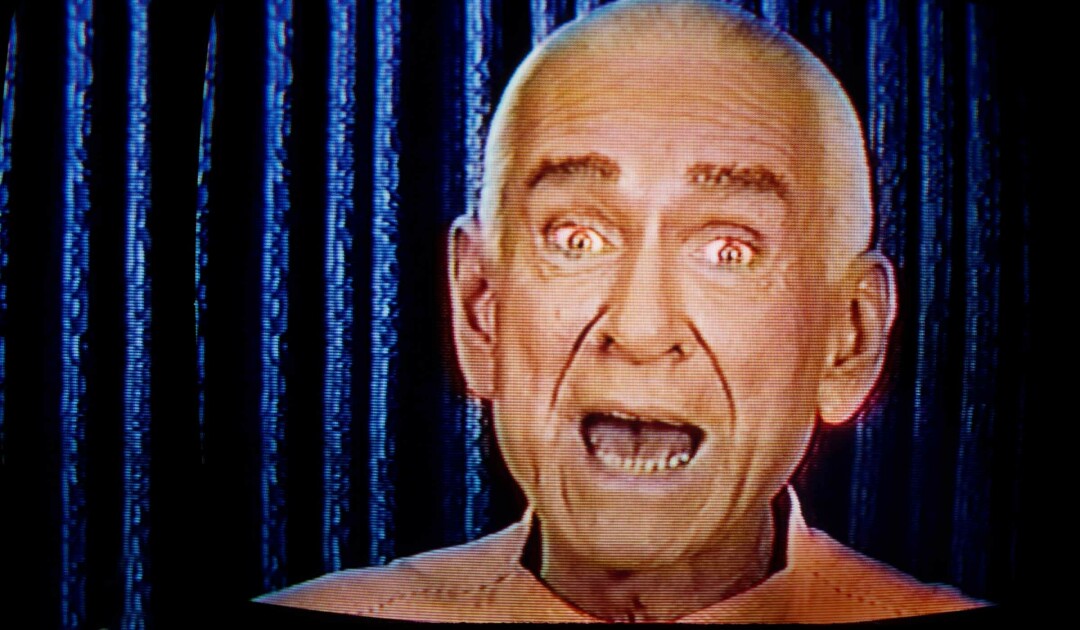 How can we reform victims of Trumpism, QAnon and the KKK?

In a Hialeah, Florida grocery store a Hispanic man asked a white woman standing behind him, in both Spanish and English, to move six feet from him as they stood waiting to check out. She ignored him and “mumbled bad words” at him. Out in the parking lot, as he was putting groceries in his car, she came within one foot of his face, yelled: “This is not going to be Biden’s America, this is my America. You need to go back to yours.” She then called him a Hispanic slur and said: “We should have gotten rid of you when we could.” She then “keyed” his car, knocked a cellphone from his hand, stomped on it, and then kicked him. Dr. Jennifer Wright was later arrested on an assault charge. Social media showed a post of her wearing a MAGA cap and saying “IT’S OKAY TO BE WHITE.” She also placed a mannequin of President Biden on her front lawn with a sign “Expose the Biden Crime Family!” She has posted a $1,000 bond.

There has been a huge increase in anti-Asian violence in the last two years according to the Stop AAPI Hate Emergency Response Network. In 2020 there were 2,800 reports of hate, including 240 physical assaults. The reports keep coming at at a higher rate in 2021. Recently an 84-year-old Chinese man died of an assault in Oakland, California and a 91-year-old was injured in an attack when he was knocked down to a sidewalk in Chinatown. Attacks on Korean-Americans have also increased. Recently a 23-year-old Korean woman was punched in the face on a New York street and accused of carrying the COVID-19 virus.

A participant in the D.C. capitol riot from Boca Raton, Florida who calls herself an “Angry Patriot Hippie” is in a heap of trouble because this was her response to an inquiry from the FBI: “You think I’m going to…let you come talk to me? I’m an American. I know my rights. My First Amendment right to free speech, my Second Amendment right to carry a gun to shoot your f-----g a—if you choose to come to my house.” On social media Suzanne Kaye has always been a strong supporter of Donald Trump.

In 1816 three English writers challenged each other to see who could write the best horror story. Mary Shelley at age 18 won it hands down with Frankenstein, or the Modern Prometheus, a story published in 1818 about a grave robber, the scientist Victor Frankenstein. He and his assistants dig up human parts and assemble an eight-foot-tall male with “beautiful” body parts. But the assembly has its problems so the creature ends up being pretty horrible.

I assume many have seen the 1931 movie starring Boris Karloff, who was made to look pretty hideous. (In the original story the creature is not called Frankenstein. The male is called “The Creature.”) It’s an entertaining novel.

The “hideous” creature has many interesting contacts with ordinary folks. The Creature wants desperately to have a female creature as a mate. He talks Frankenstein into trying to create one out of used parts. The scientist attempts it but decides not to go through with it and destroys his second creature.

Read the book or see the movie to find out how the novel ends. It’s fun. The Library of Congress in 1991 selected the film to be preserved in the National Film Registry because it was “culturally, historically or aesthetically significant.”

In the 200 years since the book, we have solved the problem of creating other human beings. With what has been accomplished in the field of genetics, using a method called CRISPR and the manipulation of genes, we can create many beautiful creatures that won’t become “hideous.”

The Creature in Shelley’s novel is hideous on the outside with white eyes, pale yellow translucent skin showing arteries, and large scars. But on the inside he at times is a very empathetic, caring, communicative “human.”

After running away to a wilderness from the operating table, he helped a poor family by collecting firewood, clearing snow from paths, and performing many other tasks for them. He and the blind father had many cordial meetings until the family came and was horrified by his appearance.

In another incident, The Creature saved a child from drowning in a river. He pleads with Victor to create a female companion for him. He promises he and his partner will go to South America and live. Victor agrees, but after completing her, he decides to destroy her so she and The Creature cannot breed children. The Creature is enraged. Read the book for the conclusion.

I have concluded that Donald John Trump is just the opposite of The Creature. Here is a man who looks like a handsome Hollywood idol who has taken advantage of his athletic frame and good looks all of his life.

Although handicapped with bone spurs, he takes advantage of women and attracts trophy wives. He doesn’t look like he was assembled from body parts – and the heavy use of orangey tanning lotions covers scars. It’s on the inside where he is completely different. He is a psychopathic narcissist who loves only himself. He has no empathy, even if he expresses “love” for white supremacists.

At one time Trump called himself “a very stable genius” when he is actually a very unstable ignoramus.
Would you want The Creature or Donald Trump for a neighbor?

Republicans: Which planet are you on? Earth? QAnon? Mars?

Most polls are somewhat ac-curate, depending upon the for-mation of the questions, and who is answering them.

Gee, I wonder why.

And who led the Jan. 6 riot at the capitol?

Fifty-eight percent of Trump voters said that Antifa, the anarchist group which no one leads, sponsored the insurrection!

Of course, at this point in the investigation more than 200 militia members, anti-government hoods, Trump flag carriers and “Make America Great Again” caps and banners, and many malcontents have been arrested for participation in the vandalism of the capitol. Not a single one has been Antifa. The poll also revealed that 76% of Trump supporters would vote for him again in 2024, and 46% would join a Trump Party if the Republicans of Mitch McConnell decide to split from Trump. Only 27% of Trump voters said they would stick with the Greedy Old Party.

A Milwaukee small-business owner summarized the position of many Trump voters: “We feel like Republicans don’t fight enough for us, and we all see Donald Trump fighting for us as hard as he can, every single day. Republicans just agree with establishment Democrats and everything, and they don’t ever push back.”

Former Republican Representative Joe Scarborough described his former party as “in a plane about to crash but the GOP national committee is running up and down the aisles of the plane hunting for Trump heretics in the seats instead of trying to find someone to fly the plane. Even as the plane disintegrates in the air, Trump’s passengers keep celebrating every wrong move, every wrong turn and every pilot error that will seal their party’s fate.”

Meanwhile, Democrats are loving the disaster of it all as the plane crashes. I think this is very premature. Anything that involves religion, racism, abortion, homosexuality and cults is very unpredictable.

Is it possible to deprogram the Trump QAnon cult?

Two political scientists, Rachel Blum of Oklahoma University and Chris Parker of the University of Washington, interviewed 1,431 supporters of unscientific Trump and unscientific QAnon supporters in the last two months. They wanted to see if it were possible to re-educate them so our democracy can be revived.

I think their research indicates it is going to be a difficult task. The poll revealed that 80 to 99% of the believers said “real Americans are losing freedoms, our lives are controlled by secret plots, unknown actors make the big decisions, and forces are changing our country for the worst.” That’s quite a paranoiac load to carry around!

These MAGA supporters were recruit-ed for the poll because they had been Republicans for years and had voted 100% Republican for House and Senate candidates in the 2018 and 2020 elections and for Trump in 2020. The poll takers also said that 98% of the participants “agreed that Trump’s fraud claims for the 2020 election were valid.”

About 95% agreed that Antifa started the riot! And 85% agreed Antifa bore “major responsibility!” So far the FBI has not found a single Antifa member was involved in the riot.

A cult is defined as a religious group that has an obsessive devotion to a single person. The members “worship” their psychopathic leader who leads their “community.”

Humans, being what they are, have been forming hundreds of thousands of cults during their 300,000 years. Check David Koresh and Jim Jones.

My favorite cult is Heaven’s Gate led by Marshall Applegate in San Diego in the 1990s. He led 39 people who thought they were spawned to be the most intelligent people in the world. The religious cult committed mass suicide in their house, all dressed alike in their bunkbeds. They are now on an extraterrestrial rocket ship following the Hale-Bopp Comet tail somewhere. Bye, bye.

Among the worst cults ever formed in Hominoid history was Adolf Hitler’s Nazi Party. The Aryan “race” was superior to all others so six million Jews, gypsies, homosexuals, mentally and physically handicapped, and other misfits had to be eliminated in death camps. Hitler’s cult started World War II, which ended up killing an estimated 75-80 million more. After the war, thousands of Germans committed suicide because they finally had to face their participation in or failure to eliminate the cult.

Traces of the Nazi cult still exist in many countries around the world, with a major component still alive and well in the Divided States of America.

Tyler is a 24 year-old Minnesota college graduate living with his mother, who has watched her change from a devoted mother to a pistol-carrying harridan spouting QAnon conspiracies and white supremacist propaganda. She anxiously waited for Donald John Trump to be inaugurated as president of the United States on March 4. She purchased lots of survival gear just in case she was forced to go to the woods. Tyler tried to “deprogram” his mother, but she told him: “My beliefs about Trump are none of your business.”

Evidently deprogramming from a cult is a tough sell. The Trump presidential library will be a stadium of l,000 large-screen TVs turned to Fox News and walls covered with his four years of tweets.