‘Then they came for the union members’ 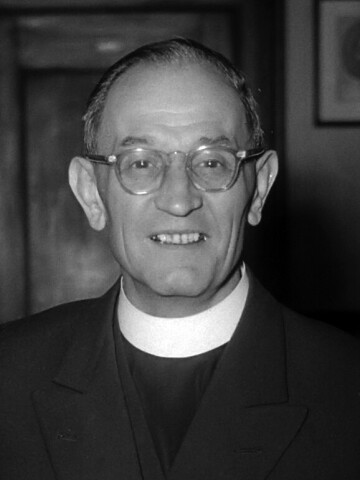 The title of this 10-year old Duty to Warn column comes from the pro-foundly important statement of truth that was attributed to the courageous German Lutheran pastor Martin Niemoller during the interwar years leading to World War II.

The entire statement (printed further below) speaks of the human tendency to ignore the suffering of others, as long as there is no immediate threat to oneself.

Niemoller had been an obedient pro-monarchy, pro-war U-Boat commander during World War I. He had opposed the pro-democracy Weimar Republic that German conservatives, especially the wealthy industrialists and aristocrats, hated so much.

As a conservative clergyperson, Niemoller also supported the anti-democracy agendas of the Nazi Party during the chaos of the 1920s and early 1930s.

But when Hitler’s true fascist agenda became clear when he came to power in 1933, Niemoller shifted his politics because of his theology and, obeying his best Christian conscience, started speaking out from the pulpit against Hitler’s attempts to transform the churches to become compatible with fascist principles.

In response to the Nazi Kulturkampf (culture wars) threats to the church, Niemoller organized the Pastor’s Emergency League and, along with young Lutheran theologian Dietrich Bonhoeffer and hundreds of other Protestant ministers, organized the Confessional Church. Because of these “crimes” of resistance to the regime, Niemoller was arrested, charged with treason and then incarcerated for seven years in a series of prisons and concentration camps.

Niemoller managed to survive the war, but Bonhoeffer was executed shortly before V-E Day. Many Catholic and Protestant clergypersons were also punished, although the organized churches were silent about the wars and the Holocaust for the duration. Hitler’s appointed Nazi “German Christian” bishop, the inept Ludwig Muller, committed suicide at the end of the war, as did many other Nazi war criminals.

This statement tells timeless truths about how tyrants manage to divide and conquer their intended victims. The lessons apply to the anti-fascist efforts that are taking place in places like Cairo, Egypt, and Madison, Wisconsin, for they have a lot to do with what went on in Nazi Germany also.

The powers-that-be know how to divide and conquer. We intended victims need to learn how to counter their efforts.

What to do when somebody else’s ox is being gored

If people whose “oxen aren’t yet being gored” do not stand in solidarity with the minority group that is being victimized, the oppressors are going to more easily be able to divide and then conquer the rest of the increasingly-isolated groups later on.

So, if the unionized firefighters and policemen and the tens of thousands of protestors had stayed at home, stayed silent and let the Wisconsin teachers go down, the Koch Brothers’ lapdog Governor Walker and his GOP cronies might have targeted them next.

If the brave Democratic Senators had not seen the trickster Walker’s hidden, unethical, anti-democratic, pro-Big Business and therefore neofascist agenda coming at them, the teachers would have gone down.

If Michael Moore had not flown into Madison and delivered his inspirational solidarity speech on March 5, the energy of the group might have flagged.

And if people from all over the world had not sent money for pizzas, sent wishes of good will and offered support in so many other ways, the ruthless out-of-state billionaire Brothers Koch might have prevailed.

“Money doesn’t talk, it screams”, sang Bob Dylan. When the corrupted, activist right-wing 5-4 Supreme Court, led by the Bush-appointed corporate minion Chief Justice Roberts, granted the non-human – and very ruthless corporations – the economic privileges of personhood (without requiring of them any of the civic responsibilities of personhood), the totalitarian agenda of the obscenely wealthy was well on its way to completion. Witness the massive corporate briberies that followed immediately in the 2010 election.

And, following that Supreme Court’s shameful 2010 “Citizen’s United” decision, there must have been a lot of salivating going on among the hoards of anonymous billionaires and millionaires, especially those in the Heritage Foundation, the American Enterprise Institute, ALEC, the US Chamber of Commerce, their 6-figure-salaried “fellows” and the 400 other right-wing think tanks that have been fouling the environment and contributing to our rapidly disappearing democratic ideals.

The right-wing billionaire Rupert Murdoch, the Australian-born United Kingdom media mogul who also owns Fox News and the Wall Street Journal, is one of the major “contributors” to GOP campaigns.

And the infamous Koch Brothers are particularly odious examples of corporate greed that has massive political connections. The Brothers Koch’s bought-and-paid-for Repub-lican governors, Republican Congress-persons, and their fully-funded front groups – the Tea Party, the Club for Growth, Americans for Prosperity and the ditsy, cutesy, anti-intellectual, flash-in-the-pan Sarah Palin have been rejoicing – until Madison.

What do you do when your own government becomes criminal?

The nonviolent resistance to tyrannical, anti-democracy regimes in Egypt and Madison has been inspiring to those true patriots who have been nervously watching what many call a “rolling right-wing coup d’etat” that has been orchestrated in America by powerful, politically-entrenched, semi-secret subversive groups that Michael Moore called the “uber-rich,” which are mainly obscenely wealthy predatory capitalist groups that are in firm control of the United States government, its military and the U.S. and world economy.

The same thing happened in Germany 80 or so years ago.

Does the German experience have anything to teach us?

Some true patriots in Nazi Germany, towards the end of Hitler’s “Thousand Year Reich” (1933 – 1945), had finally awakened to the truth of their nightmare situation.

It finally dawned on them that their own government had become criminal.

Nazi Germany had become a ruthless, totalitarian, big business-subsidized and oriented, anti-democracy, police state regime that had absolute censorship control over its media.

The fascist state they lived in (and temporarily thrived in) was orchestrating unprovoked, aggressive wars against militarily weaker states in an attempt to steal their land, riches and resources. Germany’s brutal police were intimidating and imprisoned and “disappeared” Germany’s nonviolent dissidents, Jews, other non-Aryans and foreigners into the gulag of concentration camps, many of them extermination camps.

Hitler’s obedient minions were murdering their minorities and legally torturing “suspected enemies” – not to mention their own citizens.

These German patriots loved their nation deeply but saw that the tyranny was destroying their country, so they screwed up their courage, swallowed hard and then revolted, some nonvio-lently, many violently – but their attempts at revolt came much too late for millions of innocent victims. The silence and inaction of a number of German institutions, particularly the Christian churches, could have prevented the wars and the fascist movement if it had started generations, perhaps centuries earlier.

One of the brave German soldiers involved in the attempt on Hitler’s life on July 20, 1944, had this to say when he realized that “the state had become a murderer.”

“The basis of politics must be morality. We felt terribly ashamed of what happened to Germany. One cannot blame a rank-and-file soldier who knew little of what was going on, but one can blame a person at the top who knew what was going on yet did nothing.” – Ewald von Kleist, a co-conspirator with Claus von Stauffenberg in the failed coup attempt that was code-named “Plan Valkyrie”).

Living in the relatively protected belly of the beast (Ex: The Thousand Year Reich, the Evil Empire, our own global American Empire or those in the employ of exploitative multinational corporations) has its responsibilities. Many of us white, middle-class, law-abiding, home-owning (and employed), adequately consuming Americans above the poverty line (so we don’t have to steal a loaf of bread to feed our children) have been living quite well thank you, and we have been for a long time, but that isn’t any guarantee that the beast won’t turn on us when it is hungry enough or when it needs to improve it’s next quarter’s earnings report to keep its stock price stable or rising.

As long as we see that it is somebody else’s ox being gored by the beast, we are tempted to remain silent. But we are being silent at our peril.

When others are being abused by the bastards of the world, especially if it is America’s bastards, it isn’t easy to put ourselves in jeopardy by standing with them in protest or speaking out in their defense. Yet that is what is happening now in in numerous locations of resistance against tyranny all around the world. the next target could be us.

These resistance fighters need our gratitude and support, even if the next target isn’t going to be us. It is the right and ethical thing to do.

I end this essay with some quotes from famous anti-fascists from history.

”In a time of universal deceit, telling the truth is a revolutionary act.“ – George Orwell

“When a well-packaged web of lies has been sold gradually to the masses … the truth will seem utterly preposterous and its speaker, a raving lunatic.” – Dresden James

“Those who take oaths to politically powerful secret societies cannot be depended on for loyalty to a democratic republic.” – John Quincy Adams

“They that can give up essential liberty to obtain a little temporary safety deserve neither liberty nor safety.” – Benjamin Franklin

“Those wanting to improve democracy in their countries should not wait for permission.” – Bulent Ecevit

“The only thing necessary for the triumph of evil is for good men to do nothing” – Edmund Burke (British statesman and philosopher, 1729-1797)

“A patriot must always be ready to defend his country against his government.” -- Edward Abbey

“If...the machine of government...is of such a nature that it requires you to be the agent of injustice to another, then, I say, break the law.” – Henry David Thoreau

“Remember, democracy never lasts long. It soon wastes, exhausts, and murders itself. There never was a democracy yet that did not commit suicide.” – John Adams

“If the American people ever allow private banks to control the issue of their money, first by inflation and then by deflation, the banks and corporations that will grow up around them will deprive the people of their property until their children will wake up homeless on the continent their fathers conquered.” – Thomas Jefferson

“War is the terrorism of the rich. Terrorism is the war of the poor!” – Peter Ustinov