This is Gary McFarland

Vibraphonist/arranger/composer made his mark and then died mysteriously 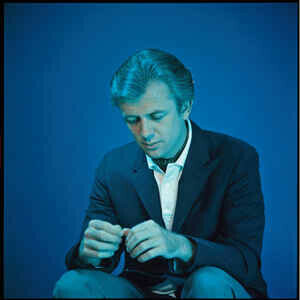 After a brief, silent, written word introduction, the sound of a needle dropping onto a record is heard, and This Is Gary McFarland begins.

That is a fitting introduction for all the Gary McFarland fans who previously only knew the vibraphonist/composer/arranger through the records he produced in an all-too brief career that ended in his mysterious death at the age of 38.

That is, in fact, how director Kristian St. Clair discovered the musician who would be the subject of his first feature documentary, This Is Gary McFarland, which was released on Nov. 4, 2014, along with a live 1965 performance of McFarland in Seattle.

“Basically, I’ve been a lifelong record collector, always liked jazz,” the Seattle-based St. Clair said by telephone. “I think I initially discovered Gary McFarland because I was a big fan of the Miles Davis/Gil Evans recordings, and I came across a ’70s reissue that paired Gil Evans’ Out of the Cool with Gary McFarland’s Profiles.”

St. Clair said he was immediately grabbed by McFarland’s sound.

“It just sounded very fresh, cine-matic, new. After that experience, whenever I would come across a

Gary McFarland record, I would pick it up, but never really knew too much about him,” he said.

St. Clair’s documentary fills in many details of McFarland’s life, meteoric musical career, and sad end with photographs, some rare and great footage of McFarland, a couple of excerpts of very personable on-air interviews McFarland did in the 1960s, and interviews with family, friends and fellow musicians.

The subtitle of St. Clair’s film is The Jazz Legend Who Should Have Been a Pop Star.

First making his mark in the musical world as a sophisticated and talented jazz arranger, McFarland in one segment explains that his mind is too restless to work in just one genre, and soon he will be fusing jazz with Latin sounds, pop and rock. He may have been the first to arrange a Beatles’ song for jazz band.

In the movie we learn he was the first to incorporate an electric Fender bass into a jazz band, which paved the way for his and others’ explorations into jazz-rock fusion.

By a quirk of fate, this talented musical explorer fell between the cracks.

With his mysterious death in a New York bar – he apparently drank a methadone-laced cocktail – at the age of 38, on Nov. 2, 1971, just 10 years after he started making his musical mark, McFarland’s bright light on the music scene was extinguished and forgotten by all but the most ardent of jazz fans.

Just before the turn of the last century, armed with a degree in broadcast journalism, St. Clair was looking for a subject for a film when he ran across dougpayne.com, a website maintained by Gary McFarland fan Doug Payne.

“I came across that website and learned more about his story and it seemed like it would make a good film,” St. Clair said. “I contacted Doug Payne and told him what I was thinking of doing. He thought it was a great idea, so he gave me the initial contacts for interviews, like Gene Lees and Steve Kuhn and Sy Johnson, a lot of people you see in the film. It just kind of snowballed from there.”

St. Clair had already committed to the project when the first hurdle to telling McFarland’s story presented itself.

“I kind of naively assumed there would be a lot more footage of Gary McFarland than there ended up being. That was one of the earlier hurdles of the film. He was on the Tonight Show twice, but those episodes are long gone. Those broadcasts don’t exist. If you’re familiar with broadcast history, one of the greatest losses in the history of broadcast is some dimwit executive decided they could save money on tape stock by taping over the Tonight Show prior to 1973. All the New York Tonight Show episodes were just wiped.”

One piece of footage he knew of was a Fresca commercial McFarland was featured in, conducting a band of his friends.

So St. Clair completed an initial cut of the film in 2006 without the Fresca footage.

“Then my son was born, that kind of slowed me down, and then I started the next project (a documentary on another iconoclastic arranger/composer/producer/musician, Jack Nitzsche). At the time it was kind of beyond my financial abilities to just put it out myself.”

So he decided, “If I’m going to put it out, I have to make a concerted effort to get this Fresca commercial. It was kind of like a mini Gary McFarland video. It’s just a great piece of footage. So I went back and did get that.”

He also located the photographer for a 1966 concert McFarland did at Lincoln Center and licensed some of those images for the film. Then he went back and remixed the film with the additional content.

“I was ready to put it out myself, press 500 or 1,000 DVDs and call it good,” St. Clair said, “and then my mom had cut out, knowing I like jazz, an article from the Seattle Times on Jim Wilke, the Jazz After Hours DJ on NPR. He just retired and the story mentioned he had more than 100 reels of reel-to-reel tapes of the radio program Live from The Penthouse [a Seattle jazz club] in the mid-60s. I knew Gary McFarland had played there in 1965, so I reached out to him and sure enough he had two reels and was happy to let me release them as long as I got the sign off from all the participating members.”

The result is an amazing live representation of McFarland in a small band setting with his future partner in Skye Records, Gabor Szabo on guitar, Sadao Watanabe on tenor sax and flute, Eddie Gomez on bass, and Joe Cocuzzo on drums.

It’s also a great addition to the McFarland discography.

“It sounds wonderful,” St. Clair said. “My only regret about it is I wish he had done a few more originals. ‘Train Samba’ is a great find because he had only recorded that with a big band with (trombonist) J.J. Johnson, but it’s all great, the soloing and everything. And it sounds great, too. He recorded it directly to two-track reel-to-reel with two microphones. I think he did a great job of capturing the ambience.”

The musical component of the package interested friends of St. Clair’s at Light in the Attic Records & Distribution.

“They really liked that package, and they were already Gary fans to begin with, which is great,” he said. “It just takes so much of the burden of releasing something like that, rath-er than having 1,000 DVDs in the garage.”

“I hope this film shines more light and gets more people listening to his music, and reissued. A lot of his best stuff is not available,” he said. “It would be nice if some of the bigger records were released. Soft Samba has never been reissued, and for that particular one I know there are some good outtakes. October Suite is obviously one of his masterpieces. The Bill Evans record, which is probably one of my top two or three albums.”

St. Clair said the film has already opened some doors to others who admired McFarland, including the ’60s rock band Love, the guitarist of which admitted the band was listening to McFarland records in the studio while creating its sophomore release Da Capo.

“Wish I would have known that for my film, but the film being out there, more of these connections are going to surface,” he said. “Being my first film, there are a lot of things I might have done differently, or people I wish I could have gotten but couldn’t get to in time, but at the end of the day, almost half of the people in that film have passed away. Herb Pomeroy passed away. Gary’s brother Gerwin passed away. Bob Brookmeyer. You couldn’t make the Gary film with as many first-person participants anymore.”

Of course he had hoped to shed more light on the 50-year-old mystery of McFarland’s death by methadone, but that, apparently, will remain a mystery.

What is known is that McFarland and two friends were at a Greenwich Village bar called Club 55 when all three drank methadone. McFarland died of a heart attack almost immed-iately and writer David Burnett went into a coma and died several days later.

Some believe their drinks were spiked, but St. Clair found little new to add to the story.

“It’s a real big question whether he knew what he was ingesting or not because he definitely struggled with substance abuse,” St. Clair. “It’s just so crazy because there’s no paper trail. No investigation. No police records. It was all kind of swept under the rug. The other person who died, David Burnett, made enough of a footprint that you were able to go back into the record and find references to his death in the same fashion. No one at the time put the two of them together of dying at the same time. It’s incredible to think something could happen to two people. McFarland had a big obit in the New York Times, so still was very much famous. The other guy was a writer and editor known in the literary scene. Today that would never fly.”