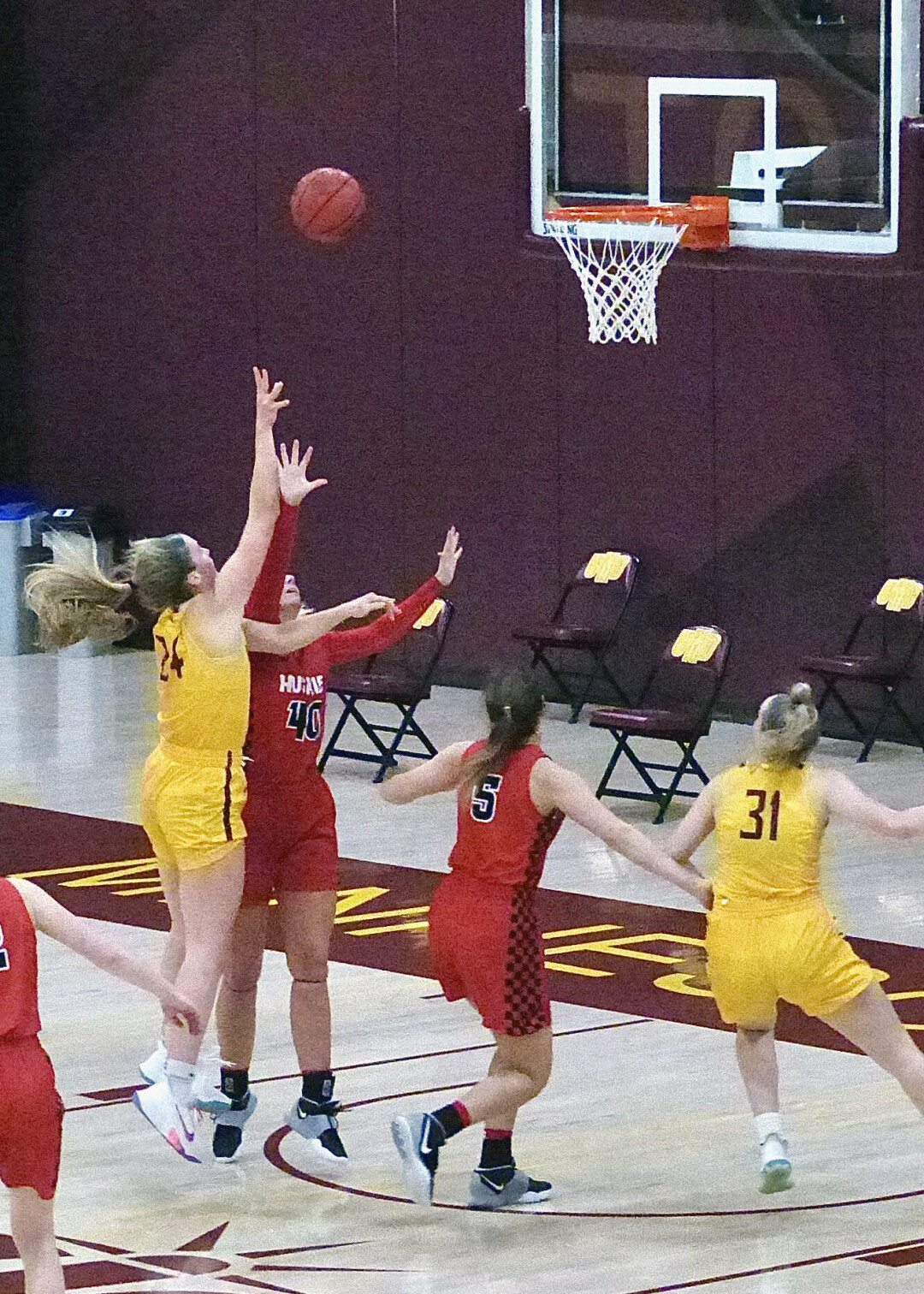 UMD junior Brooke Olson, left, dropped in 2 of her 22 points Friday, but the cold-shooting Bulldogs lost their first game of the season, 60-49 to St.Cloud State at Romano Gym. Photo by John Gilbert.

At the Division 2 end, the Bulldogs men’s basketball team ended its season at St. Cloud State, while the women were at home in Romano Gym striving to finish the regular season undefeated as Northern Division champs in the Northern Sun Intercollegiate Conference.

For a time, before the UMD women’s hockey team set new standards with a late but spectacular pair of victories over St. Cloud State, it looked like it might be a lost weekend in Duluth.

The UMD men, who were in first place in the powerful NSIC just a couple of weeks ago, before some late struggles sent them nosediving to third place, had a one-game chance to right the ship with a makeup game against Colorado College at AMSOIL Arena. The Bulldogs needed to win to try to move back up in the NSIC before playoffs, where all eight teams head for Grand Forks for a single-elimination tournament where everybody gets a one-or-done chance to advance.

More than that, they had to regain the feast part of their feast-or-famine offense in time for the final two games, against arch-rival St. Cloud State, and then the playoffs. Colorado College has struggled since beating UMD in one game at the Omaha pod that started the season, but everybody in the NCHC is a tough challenge, and every player on every team knows it.

UMD came out firing on all cylinders, as coach Scott Sandelin kept his lines intact as if repetition might get the Dogs to barking. But two first-period power plays, overlapping to provide a 1:52 span of two-man advantage, were an early warning sign when UMD got off  lot of shots and chances but couldn’t dent Dominic Basse’s goal-tending. It took old reliable Nick Swaney to come through at 0:19 of the second period for a 1-0 lead, and the Bulldogs went on to establish a 17-2 edge in shots as the middle period wore on.

It pretty much continued that way in the third, with UMD clinging to that delicate 1-0 edge. At the 6:53 mark of the third period, Minnesotan Matthew Gleason gained a rebound behind the UMD goal and circled away to curl out to the slot, held the puck just right, and fired a shot that managed to squeak through UMD goalie Ryan Fanti for a 1-1 tie.

The Tigers didn’t get many more chances the rest of the third period, but they got one. With 2:29 left in regulation, Jack Gates pried the puck off the end boards and nudged it out to Hunter McKown near the end line, and he relayed it to the left circle, where Troy Conzo took a quick shot that hit Fanti and, as players from both sides converged on the crease, trickled in.

Cole Koepke got a break-in chance but his shot hit the left pipe, making a loud report. Then it got to crunch time, and Fanti went to the bench for a sixth attacker, but the game ended 2-1 despite UMD’s 43-14 bulge in shots. The feast-of-famine part came after UMD swept 8-1, 3-1 victories from Miami to start the month, the Bulldogs then went to Western Michigan and lost 4-0, 4-1, dropping from the league lead, and losing 2-1 to CC means two goals in a three-game losing streak.

The series against St. Cloud was supposed to be Friday in St. Cloud and Saturday in Duluth, but the league changed that, so the teams play in Duluth as scheduled Saturday, with the Huskies 12-5 and the Bulldogs 11-7, and the rematch of the series will be next weekend at St. Cloud.

The UMD women’s basketball team, on the other hand, had a tough chore to get past St. Cloud State on the final regular-season weekend in a pair of games. In the first game, both teams started slowly, land midway through the first quarter, it was 4-4.

Brooke Olson, UMD’s brilliant junior from Rice Lake, Wis., had all four of those points. At that point, she was given a break, and when she returned to the game, UMD trailed 10-4, having given up 8 straight points. The Bulldogs battled back to within 12-11, but a 5-point spurt put the Huskies back ahead 19-13, and they never looked back. It was 34-20 at halftime, and St. Cloud State led 46-32 after three quarters, and it ended up 60-49.

That victory gave St. Cloud State renewed hope for Saturday’s rematch, but this time UMD won 69-60, with Brooke Olson using her 6-foot-2 size to good use for 26 points, although it took a 24-9 surge in the fourth quarter to secure the victory. Ann Simonett added 11 and Payton Kahl 10, while Toriu Wortz had 25 to pace the Huskies.

The NSIC tournament was to start Thursday, with UMD opening against Sioux Falls, the No. 4 seed from the South, with No. 4 North Moorhead meeting Augustana, while on Friday, No. 2 North St. Cloud faces MSU-Mankato, and No. 3 North Bemidji State taking on  Concordia. Semifinals are Friday night, with the championship on Saturday at 1 p.m.

A high school hockey highlight at Hermantown last week saw Denfeld giving powerful and unbeaten Hermantown a battle before the Hawks prevailed 6-3. The Hawks outshot the Hunters 55-12, but Denfeld goaltender Jacob Snyder kept giving the Hunters rime to stay in the game.