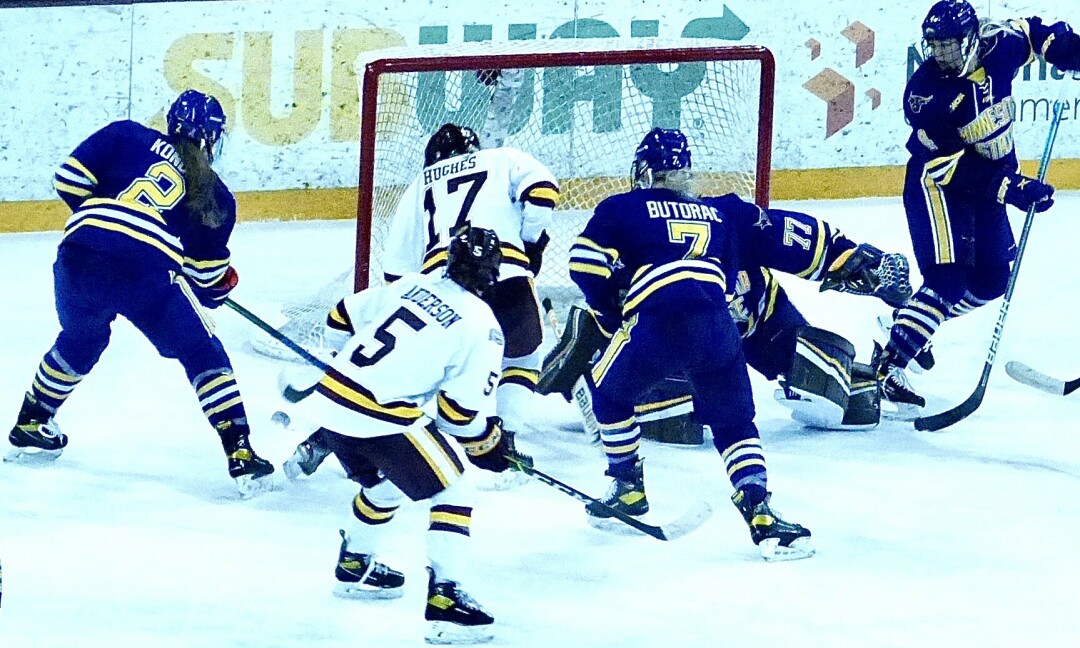 Maybe this weekend’s Women’s WCHA final regular-season series between top-ranked Wisconsin and UMD will live up to the hype of being the biggest series of the season, but whether it does or not, there will be no way the spectacle can exceed what Bulldog junior center Gabbie Hughes accomplished last weekend.

Hughes, who had played as well as possible without scoring goals through most of the season, lifted the Bull-dogs up on her shoulders to score spectacular goals both Saturday and Sun-day to inspire a sweep over Minnesota State-Mankato by the slimmest of margins – 2-1 in the first game and 4-3 in the rematch.

The sweep lifts UMD to 10-4 in this pandemic-abbreviated season, confusing no less a keeper of records than the Minneapolis Star Tribune, which listed Minnesota second, Ohio State third ahead of fourth-place UMD, behind the high-flying Badgers, when actually UMD stood second by percentage.

That’s the method chosen for this season, rather than points, because teams might play varying number of games. The Strib apparently missed the memo, and didn’t fix it until Tuesday. Wisconsin stands 11-2-1, and UMD is now 10-4, with Ohio State 11-5 and Minnesota 11-7-1.

That means the only team that can catch Wisconsin is UMD, which would have to sweep the Badgers to climb to 12-4 while dropping the Badgers to 11-4-1.

That would be an almost incomp-rehensible feat, the sort of thing UMD almost routinely pulled off in the first 10 of its while winning four WCHA league titles and five WCHA playoff titles, as well as five NCAA titles — all in the first 10 years of women’s NCAA tournaments, and never again since 2010.

Those who weren’t here, or didn’t pay attention, may not realize that UMD won the WCHA title in 1999-2000, the first year UMD had women’s hockey, and when the NCAA started holding a national tournament one year later, the Bulldogs won the first three, with the banners hanging from the AMSOIL Arena rafters showing national titles in 2001, 2002, 2003, 2008 and 2010.

But before all of that comes to a climax with this weekend’s games against the heavily favored Badgers, we can hold up the sensational scoring feats of Jenny Potter, Maria Rooth, Caroline Ouellette and all the other Bulldog standouts and add the name of Gabbie Hughes, just because of last weekend.

Her goal on Saturday was, simply, the most spectacular goal scored by man or woman this season at AMSOIL, lifting the Bulldogs from more than 50 minutes of total frustration to a 1-1 tie, which was broken with 4:58 remaining by McKenzie Hewett for a 2-1 escape from the determined Mavericks.

The setting for Hughes requires establishing that she is a proven goal-scorer from her first two seasons, including last year’s All-American stardom, which made this season doubly frustrating.

Hughes scored against St. Cloud State early in the season, then never scored another goal until St. Cloud State reappeared on the schedule, and she scored one each in the 4-1, 6-0 victories, to end January with 3 goals.

“I was playing a different game,” she said, “focusing on other things, like defensive-zone play and face-offs.”

Her coach, Maura Crowell, repeated those same focal points. Presumably, Hughes was focusing on not scoring goals the previous weekend, when UMD lost 1-0 in overtime and won 1-0 in overtime in a series at Bemidji State.

But with the third period half over on Saturday, MSU-Mankato was generating a rush through the neutral zone when suddenly Gabbie Hughes had a flashback to her goal-scoring days. She caught the puck-carrier from behind with a lunge, lifted her stick and swiped the puck and whirled toward the Mankato end, all in one motion.

As she rushed, all alone, into the Mavericks zone, the other four Mavericks on the ice were all in her scope of vision, retreating but virtually surrounding her.

Hughes bolted straight up the middle, as if to split the two defensemen, who closed the gap. Hughes, within 25 feet of the net by then, tried to barge between them, but tripped over the skate of Lyndsey Howard and started to fall forward.

A normal player would have belly-flopped and the play would have been over; Gabbie Hughes is not normal. As she went down, she kept the puck on her stick blade and snapped off a shot that sailed over the shoulder of goaltender Calla Frank and caught the upper right corner of the net. As the puck dropped to the ice, Hughes couldn’t stop her slide until she slid past the goal on the left, finally raising her stick in celebration while still sprawled on her side.

It was suggested to the coach that the goal would be worthy of ESPN’s top 10 plays of the day, and Crowell, admittedly with the worst seat in the house on the bench, said she would have to take another look at it on video. She did. It was submitted, and made it onto the airwaves late Saturday night as No. 7, which probably means they had four or five slam dunks to consider.

That goal broke the perfect game being spun by Frank, at 10:53 of the third period, and thus inspired, junior defenseman Maggie Flaherty took off up the left boards, carrying the puck deep before zipping a perfect pass across the goal-mouth where third-line center McKenzie Hewett cashed in at 15:08 for the eventual game-winner. Goalie Emma Sorderberg  had to come up with a couple big saves to hold on, but it ended 2-1.

On Sunday, again the Bulldogs spotted the Mavericks the first goal. Trailing 1-0 early in the second, Taylor Anderson scored a goal from behind the net on the right, off Frank’s pad and in on the fortunate carom.

At 8:43, Gabbie Hughes was near the slot on the right when the puck came to her on the rebound and she scored to put UMD up 2-1. But this one was far from over, and Clare Butokac tied it at 15:05 of the middle period by putting a wide-open rebound past Soderberg.

Early in the third period, Mankato’s Jamie Nelson circled out from the right side to the slot and scored for a recaptured Mavericks lead at 3:28. Midway through the third period, UMD attacked the net ferociously on the second-unit power play, and Kesundra Betinol got credit for knocking in her first goal of the season for a 3-3 deadlock.

The Bulldogs had to kill a penalty to Taylor Anderson with 7 minutes left, and the Bulldogs resumed their attack. Knowing the three points for a regulation victory was vital, compared to the two for an overtime victory – or one for an overtime loss – Crowell called time out with 19.6 seconds remaining.

Associate head coach Laura Bellamy made the call on strategy, Crowell said, which meant winning a neutral-zone face-off, getting the puck in deep, and finding a way to gain possession and get a shot through.

Gabbie Hughes won the face-off back, and Flaherty gunned it hard up the right boards, where Anna Klein battled for possession before Taylor Anderson snatched the puck away and skated right to left along the end boards.

She curled out, looking for Hughes, who was battling for position in front, so she passed instead up the slot, where Ashton Bell was moving in forcefully from the point.

Bell fired a shot, and got it through, as Hughes – who knows why? – stepped to the left of the crease. Calla Frank blocked Bell’s shot in heavy traffic, and the rebound glanced to the left.

“The rebound hopped right onto my stick,” said Hughes, who quickly smacked it into the goal. The

Bulldogs went wild, and the scoreboard showed the remaining time was 3.1 seconds.

Crowell said she didn’t mention to her players the importance of winning to gain the extra standings point.

“Sometimes when you talk about the gravity of a situation, it doesn’t work,” she said.

Nobody told Gabbie Hughes of the importance of the moment. Nobody had to.

The two goals in the game gave her six for the season – five of them in the last four games, and including two enormous goals she will never forget.