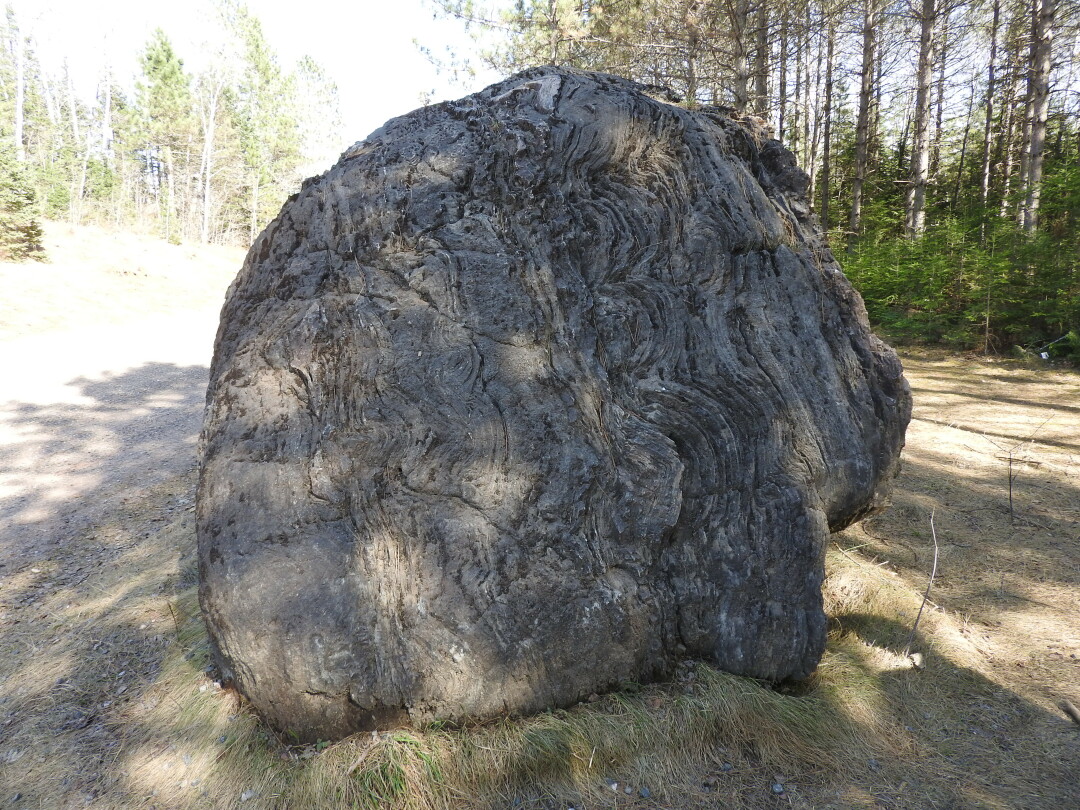 The Grandview Boulder near Lake Namakagon exhibits thinly layered structures that scientists are now looking for on Mars. Photo by Emily Stone.

There’s a space kid inside almost every one of us. That fact is made clear to me by the nation’s giddy response to NASA’s most recent accomplishment – a successful landing of the Perseverance rover on Mars.

The rover used a heat shield, a para-chute, cameras and a rocket-powered jetpack to land. Actually, the jetpack allowed the main contraption to hover while the rover was lowered gently to the surface on a cable.

Whaddya wanna bet that next summer there will be kids making rocket noises while they drop the requisite bucket-on-a-rope out of their treehouses?

While that bucket is probably hoping for a delivery of cookies, Perseverance is looking for signs of life. Its landing area includes a delta—which is a place where a river carrying sediments from its entire watershed flowed into a lake, slowed down, and dropped most of its load in a fan-shaped landform.

If there was life on Mars, surely signs of it would have been collected by the river and deposited here. The shoreline of the lake could be another hotspot, based on what we know about life and fossilization here on Earth.

Using another trick straight out of our 10-year-old dreams, scientists can tell the rover to shoot a laser beam at any promising rock and then analyze the chemical composition of the dust cloud that rises.

If the rock warrants a closer look, then an x-ray beam and another las-er will take a peek at the chemicals present. In the most promising spots, the rover will drill down and collect a piece of the planet.

The sample will be stored in a box full of neat rocks (who among us doesn’t have one of those in the basement or garage?) that a future mission of the European Space Agency will bring back to Earth.
Signs of life could include minerals that don’t tend to form on their own, or structures that often form in the presence of critters.

There’s an example of one of those structures on Old Grade Road northeast of Lake Namakagon. The Grandview Boulder is taller than a person, and under the moss you can see thin, convex layers in the rock. These layers are the fossilized remains of colonies of photosynthetic microbes. The algae and cyanobacteria excreted mucus, which trapped sediment and eventually built their own rock – called a stromatolite.

Stromatolites are common in the fossil record on Earth, but rare to find still living. And while discovering a rock with this pattern on Mars would be exciting, it isn’t a sure thing. Stromatolites can also form without the help of life.

So, it’s going to take something pretty special to give scientists complete confidence that they’ve discovered extraterrestrial life.

There’s another problem, too. What if life on Mars looks so different from life on Earth that we don’t even recognize it?

I tackled this problem myself once, as a middle schooler at Girl Scout Camp.

The Girl Scouts had a partnership with NASA, and one of the activities they provided was a variation on an activity often called “Create-A-Creature.” Each girl was assigned to a different planet and given a description of the habitat there. All rock, all gas, no atmosphere, crushing gravity, toxic chemicals – there was a stunning array of characteristics among our planets and their moons.

Next, we were given a box full of bottles, cans, yogurt cups, and all manner of random stuff scavenged out of the recycling bin, plus glue, pipe cleaners, and other standard craft supplies.

The goal? Create a creature with adaptations that allow it to survive on our assigned planet.

Our assemblages of detritus didn’t look like much in fact, but in our minds they had rock-crushing teeth, sulfur-digesting guts, and all sorts of fantastical adaptations that have not yet evolved on Earth. That combination of crafts, space and tons of imagination was a winning combination for the child that was me.

Honestly, the space part wasn’t why I loved it, but the other two ingredients won me over.
I have since led this activity with my own students in many forms.

On “Tidepool Day” in California, for example, we built sea creatures using both trash and natural objects scavenged from the wrack line left by high tide.

And yesterday, just hours before the Perseverance landed, I led 5th graders in creating their own special fish during a Virtual MuseumMobile visit.

Because we don’t really know what life on Mars would look like if it did, in fact, exist, those NASA scientists need a special combination of skills and imagination. Waddya wanna bet that those NASA scientists and engineers were once kids who created things out of the recycling bin, made rocket sounds in treehouses, collected buckets of neat rocks in their garage, and crick stomped in rocky streams?

Waddya wanna bet that the NEXT generation of NASA scientists is doing those things right now?

Emily Stone is the Naturalist/Education Director at the Cable Natural History Museum. Her award-winning second book, Natural Connections: Dreaming of an Elfin Skimmer, is now available to purchase at cablemuseum.org/books. Or order it from our friends at redberybooks.com to receive free shipping! For more than 50 years, the Cable Natural History Museum has served to connect you to the Northwoods. The museum is closed, but our Mysteries of the Night exhibit is available online.