Death of a nation 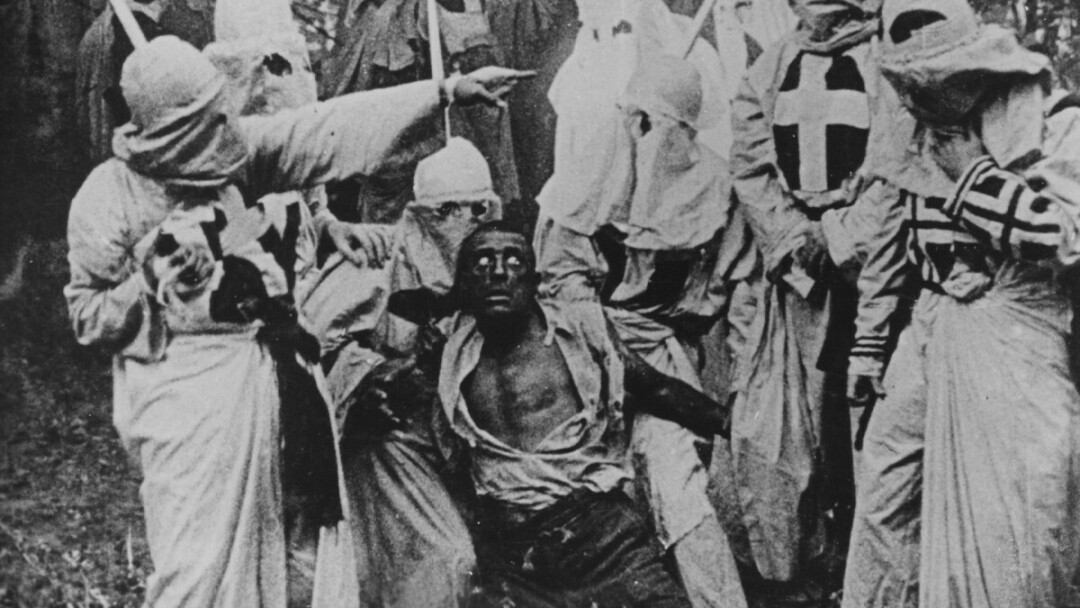 A scene from D. W. Griffith’s Birth of a Nation, in which the Ku Klux Klan is portrayed as a “heroic force” and blackfaced actors were employed to portray the “unintelligent and sexually aggressive” African-Americans in the movie.

Have we ended ‘racism, extreme materialism and militarism?’

In 1915 President Woodrow Wilson saw the first American motion picture ever shown in the White House, The Birth of a Nation, based on the book The Clansman: A historical Romance of the Ku Klux Klan by Thomas Dixon. Jr.

It was a three-hour movie, part fiction and part history, covering the lives of the Northern pro-union Stonemans and the Southern pro-Confederacy Camerons.

I first saw the movie in 1957 when I was teaching Senior English at Fargo Central High School and the history teachers were showing it in their classrooms to spark debate and interest in their classes.

The movie has been called the “most controversial film ever made in the United States” and has been preserved in the Library of Congress.

I wonder if someone will make a movie called The Death of a Nation if this country does not survive the next decade.

Birth of a Nation was a tremendous commercial success while inspiring the rebirth of the Ku Klux Klan almost immediately, presenting lynch mobs with another excuse to kill black people. Lincoln is portrayed positively while black people are shown as unintelligent and sexually aggressive toward all white women.

There are a few black actors in it but most black roles were played by black-faced whites. The movie shows the Ku Klux Klan as a “heroic force,” absolute in its efforts to preserve American values and a white supremacist social order. Sound familiar?

A month ago I wrote we were living on a knife’s edge and whether our democracy would survive. That knife’s edge is now cutting into flesh and bone. Let’s remember the Trumplican cult has a huge sworn-in posse-mob of Proud Boys, Boogaloo Bois, American Freedom Party, Three Percenters, Oath Keepers, Aryan Nation, 18 Michigan militias and the dozens of Patriot militias possessing millions of semi-automatic weapons, with access to 400 million more firearms.

Has a political party ever been better armed by a morally and financially bankrupt National Rifle Association led by a greedy despot supporting a greedy despot?

In the hundreds of letters I have read on the impeachment, I have not run across a better analysis of what is happening in this country than the one submitted by Daniel Ferguson of Melrose, Mass., to the New York Times: “I keep hearing about Republican cowardice. But as the Senate impeachment trial indicated a mercenary GOP looks ever more fearless – or at least shameless – in its pursuit of power at any cost. Republicans have recognized that our democracy is incompatible with the indefinite preservation of their shrinking minority’s rule, and so they have resolved to sacrifice democracy.

Whether by voter supremacy, gerrymandering, dark-money-fueled propaganda, judicial stacking or a coup d’etat attempt, the worst of the GOP may be slinking traitors to our constitutional order, but they are not cowards. Too many courageous Democrats, content to be ‘correct’ rather than to prevail, are dangerously deluded about this self-evident truth. It takes nerve to pull off a Trumpian Party transformation and soften up half the country for future autocracy. It’s the rest of us who will turn out to be the cowards if we let them get away with it.”

If anyone has a better analysis of the cult’s coup d’etat attempt, please send.

Add Native-Americans of more than 600 tribes, Mexican-Americans who had owned land within what is now the Divided States of America for 300 years, and Chinese and other Asians who built our transcontinental railroad in the 19th century.

Our history is not exceptional. It is murderous, nasty, brutish, inspiring, arrogant and laudatory – like the history of many other countries. It must be taught to our young or they will repeat all of our mistakes.

After observing 350 years of American history, James Baldwin, a gay black writer of Harlem gained renown for his writing about American racial, sexual and class distinctions in the middle of the 20th century.

When asked about the historical roots of the United States, Baldwin, after enjoying living in Europe while being treated as an equal human being, summarized our lack of progress in what he wrote about: “It’s taken my father’s time, my mother’s time…my niece’s and my nephew’s time. How much time do you want for your progress?”

In fact, racial discrimination has spread. In late January of 2021, 84-year-old Vicha Ratanapakdee was attacked during a morning walk in San Francisco and later died of the attack.

On the same day in Oakland a man from Chinatown was knocked down to the cement sidewalk and severely injured. He was 91.

Remember, our immoral, ignorant, psychopathic cowardly jerk of a president blamed the Chinese and Asians for COVID-19, calling it the “Chinese virus” and the “Kung flu.”

We should all be familiar with the 4,000 lynchings and the murder of black boys, men, girls and women since 1619. We should study the kill-ing of many thousands of Native Americans so we could possess millions of acres of lands where they lived.

Heard much about “one person, one vote” lately?

That’s supposed to be the spine of American democracy. Actually we have a government that no longer can work because of bizarre representation, the inability to amend a Constitution to establish a working government – and the quality of the people who represent us in the Senate.

North Dakota has fewer people than people that ride the subways in New York City at noon.

At the present time we have about 340 million people living in the Divided States of America. We have 170 million represented by only 18 senators. But 52 senators represent 62 million from the 26 smallest states. That means 30 senators represent the balance of 108 million.

You may want to stop and think about this for a time.

Did our slave owner founders who agreed blacks were only three/fifths of a human ever consider those numbers?

So a Wyoming citizen gets 70 times the representation than a California citizen.

Are you kidding me?

What a mess. Senators have to represent people and states and acreage. Senators should be philosopher-kings instead of fund raisers and publicity hounds.

It gets much worse if we start to legislate about race.

Wyoming is 89% white and receives 50 times in federal expenditures what California receives. California is only 40% white. Work on that one awhile.

The largest states – California, Texas, Florida and New York – are the most racially and ethnically diverse in the DSA.

The smallest states, Wyoming, North Dakota, South Dakota, Maine, and Vermont have very few colored, and seven of the 10 least populated states are among the whitest 10.

The economic power of the DSA is on the East and West coasts while the political power in the Senate is in the Bible-thumping, pro-gun, anti-gay flyover country in the least populated states. With present Senate rules it is not a workable situation.

Question for evangelicals: Why did God defeat your ‘Chosen One?’

What did white evangelical Christ-ians think of their “Chosen One” while watching the riot in the Jan. 6 insurrection at the capitol?

A Marist College/PBS/NPR poll reported that 63% did not think the results of the election were accurate, and that 65% thought Trump was innocent of causing the riot that resulted in threats of hanging Christian VP Mike Pence for not nullifying the election and encouraging the crowd to find Catholic Speaker of the House Nancy Pelosi in her office so they could “tear her into little pieces.”

A Public Religion Research Poll taken at the same time revealed evangelicals gave Trump a 62% approval rating while national polls said he had an approval rating of 31% when he left office.

At the Jan. 6 Save America March, Trump’s religious and White House adviser Paula White opened the pro-gram with this prayer: “Let every adversary against democracy, against freedom, against life, against liberty, against justice, against peace, against righteousness, be overturned right now in the name of Jesus.”

Paula: Are you saying that Almighty God made a big mistake on Nov. 3 by defeating your “Chosen One” by seven million votes? Do you believe Alex Jones when he accused President Joe Biden of being a “slave of Satan?”

Will Democratic forces win battle of racism, materialism and militarism?

In April of 1967 Martin Luther King preached a sermon in New York City’s Riverside Church about our participation in the Vietnam War. He talked about the radical revolution in values and emphasized the problems associated with what he called “the giant triplets of racism, extreme materialism and militarism.”

A half century later these three problems are still almost insurmount-able in this country. Although we are all out of Africa, racism permeates our society and creates tall walls and silos among us.

Extreme materialism creates greed, inequality, poverty, and sickness. The world’s 10 richest people could take the money they have “earned” in just the year of COVID-19 and pay $9 a shot and vaccinate every human on earth for a total expenditure of $141.2 billion.

In the DSA, our 659 billionaires have added $1 trillion to their bank accounts in the last year, doubling the “wealth” of the bottom 50% of 170 million people.

We seem to think we are the world’s cop with more than 700 military bases in every corner of the world while we fight a 19-year-old war in Afghanistan.

Our militarism costs us more than $740 billion a year while 62 million American workers make less than $15 an hour. That $740 billion would pay half of the student debt presently owed by 45 million college students.

A hundred years earlier Abraham Lincoln gave us the same warning: “I see in the future a crisis approaching that unnerves me and causes me to tremble for the safety of our country…corporations have been enthroned and an era of corruption in high places will follow, and the money power of the country will endeavor to prolong its reign by working upon the prejudices of the people until all wealth is aggregated in a few hands and the Republic is destroyed.”

My favorite American cynic H.L. Mencken sums up his view of politicians: “It is a little inaccurate to say I hate everything. I am strongly in favor of common sense, common honesty, and common decency. This makes me forever ineligible to any office of trust or profit in the Republic.”

This credo particularly applies to 43 members of our Senate. “The world’s greatest deliberative body” has become a Rube Goldberg farce, performing simple tasks in long convoluted hysterical ways – only ending up failing to do anything worthwhile for the people for the long term.