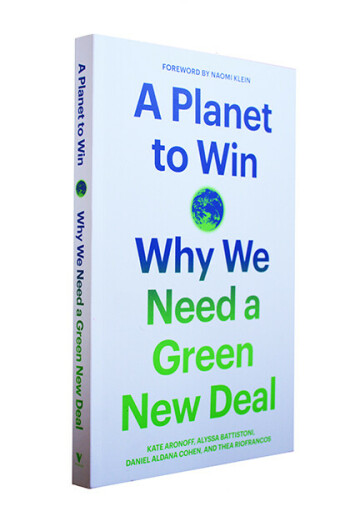 On Feb. 21, 2019, the New York Times ran a story about a new federal resolution being presented to the U.S. Congress that was cosponsored by Alexandria Ocasio Cortez and Ed Markey. The Green New Deal resolution called for massive public investments to get the country’s economy to net zero carbon in the 2030s, and to prioritize clean energy and “resilience investments” in racialized and working-class communities.

The foundation of the Green New Deal was to reduce greenhouse gas emissions in order to avoid the worst consequences of climate change while also trying to address various societal problems like racial injustice and economic inequality.

In the book "A Planet to Win: Why We Need a Green New Deal" (2019), the authors propose that any climate action must be combined with attacks on any social inequities. They stated, “The most effective way to slash emissions and cope with climate impacts in the next decade is through egalitarian policies that prioritize public goals over corporate profits, and target investments in poor, working class and racialized communities.” The primary focus of this deal was the power of public investment and coordination to prioritize decarbonization.

While this resolution still sits in Congress, there is a growing national debate about the merits of a Green New Deal in the nation’s capital. And outside of Washington, D.C., there are a significant number of cities across the country that have already begun to embrace or adopt the Green New Deal resolution.

In May, 2019, the city of Austin, Texas, passed a Green New Deal resolution that focused on tackling climate change and social inequities. Not only did the city pass a resolution endorsing the proposed federal resolution but it helped create a comprehensive electric vehicle plan and develop a climate resilience plan. The resolution also addressed the need to transition the local utility, Austin Energy, to 55% renewables by 2025. The city recognized that more than 75% of the greenhouse gas emissions from Austin and the surrounding Travis County came from transportation and electricity production, and that the area’s population was projected to double within 20 years.

On Feb. 10, 2020, the mayor of Los Angeles, Eric Garcetti, signed his 25th executive directive, “L.A.’s Green New Deal: Leading By Example.” The directive laid out the mayor’s vision for a carbon neutral city while also addressing equity and environmental justice.

Los Angeles’ Green New Deal included proposals to develop a series of bus and light-rail infrastructure improvements, promote walking, biking and “micro-mobility,” amend the city’s green building code to ensure that all new roofs and renovations are “cool roofs,” and that all new construction and major upgrades demonstrate a pathway to carbon neutrality.

And in August 2020, Boston’s city council introduced a report titled “Planning for a Boston Green New Deal and Just Recovery.” The report highlighted the disparities exacerbated by the effects of the coronavirus pandemic which had hit low-income residents and communities of color disproportionately harder than others, and acknowledged that these are the same areas that will bear the brunt of climate change. The city council recognized the importance of incorporating and addressing equity in any future plans.

The Boston report stated that “cities must embody the spirit of an urgent, action-oriented drive to decarbonize our society and economy” and proposed that the city reach carbon neutrality by 2050. It also promoted a new policy for Boston to leverage its bond rating to issue “Green Municipal Bonds” geared at speeding up solar energy and pushing energy efficient measures for public amenities like community centers, schools and even parking lots.

Ultimately, the report advocated a push to “reimagine what’s possible for the public good.”

So, how could Duluth embrace the underlying principles of the Green New Deal as we move forward to address climate change, and various social issues like economic and racial injustice?

For our city, we could focus on two key themes: going public and going local.

And for the local good, how do we support and develop a local food system, a local economy and local renewable energy sources and systems?

For a city like Duluth, becoming more local and more public could serve as a significant and meaningful paradigm shift in how we envision and create a more sustainable and environmentally just city as we address the major challenges of climate change and improve the quality of life for all the citizens in our greater community.