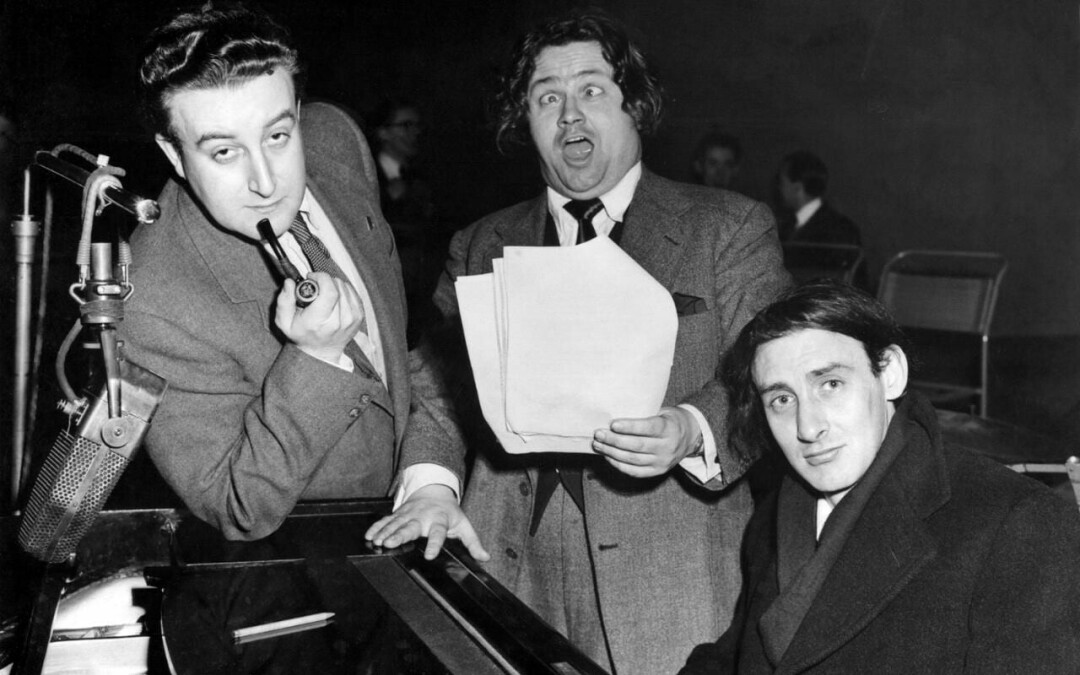 The Goon Show, a British radio program that ran on BBC from 1951 to 1960, is best known now for being a profound influence on Monty Python. Several of their shows can be heard on YouTube. Michael Bentine was one of the founding members. He played an absent-minded professor, but left after two seasons, before the Goon Show reached its peak popularity.

I first found a record album with two Goon Show classic programs. The first was “The Histories of Pliny the Elder,” dealing with a Football Match between the Romans and Ancient Britons, which England lost, as usual. Secombe plays Caracticus Seagoon, and with Bluebottle and Eccles find themselves the main attraction at the Colosseum .

In “The Dreaded Batter Pudding Hurler of Bexhill on Sea,” we hear that “Seagoon and Bluebottle travelled by sea. To escape detection by German U Boats, they spoke German throughout the voyage, heavily disguised as Spaniards. As an added precaution, they travelled on separate decks and wore separate shoes on different occasions.” This is Pythonesque if nothing else is.

In the early days, Secombe was the star of the show. He was well known as a vocalist, with a powerful tenor voice which he modestly described as ”less bel canto and more can belto.” He had two top five singles in 1955 and also recorded a religious album. He was a very religious man, and later hosted “Highway,” a weekly religious program.

Sellers was born to a wealthy acting family. He was a drummer as well as a comedian known for his impressions. Everyone knows what happened to him.
Milligan was born in India, the son of an Irish captain in the British Raj. He began his show business career as a trumpet player in a jazz band. After he was drafted, he was in an impromptu band while he was still in Britain.

He would later be sent to participate in the invasion of North Africa. His biography says that he was shell-shocked in the service and as a result became bipolar. I suspect he would have been diagnosed with PTSD these days.

I have a particular affinity for Milligan. He wrote a lot of poems — not all of them comical — but I, of course, was struck by this Shakespearean theme:

A Silly Poem
by Spike Milligan

Said Hamlet to Ophelia,
I’ll draw a sketch of thee,
What kind of pencil shall I use?
2B or not 2B?

He wrote his memoirs from the war, planning on a trilogy, but actually ending with five volumes. I have the first book in the series: “Adolph Hitler, My Part in His Downfall,” which covers the period from just before he was drafted until the troops land in Algiers.

I was interested to see that he was stationed near Bexhill-on-Sea, which he apparently regarded as a pretty dull town, possibly needing some batter pudding hurling to liven things up.

He also quoted some words from a song about a tattooed lady that sounded a little familiar:

She had a battleship
Tattooed upon her hip,
And where I could not see,
A map of Germany.
She had a picture of Harry Lauder
Right across where she got broader.

The reason the words sound familiar is that I once spent a lot of time memorizing the words to “Lydia the Tattooed Lady,” which Groucho Marx sang in “At the Circus” in 1939. Similar idea, but not quite the same:

Lydia, oh Lydia, that encyclo-pidia.
Oh Lydia The Queen of Tattoo.
On her back is The Battle of Waterloo.
Beside it, The Wreck of the Hesperus too.
And proudly above waves the red, white and blue.
You can learn a lot from Lydia!

When her robe is unfurled she will show you the world,
if you step up and tell her where.
For a dime you can see Kankakee or Paree,
or Washington crossing The Delaware.

My tongue would get tangled up on the line “When her muscles start relaxin’, up the hill comes Andrew Jackson.” I would really like to see that.

Monty Python got Milligan to play a part in “Life of Brian.” His character was called Spike, and although I’ve seen that movie a couple of times, I can’t remember that character. I guess I’ll have to watch it again.