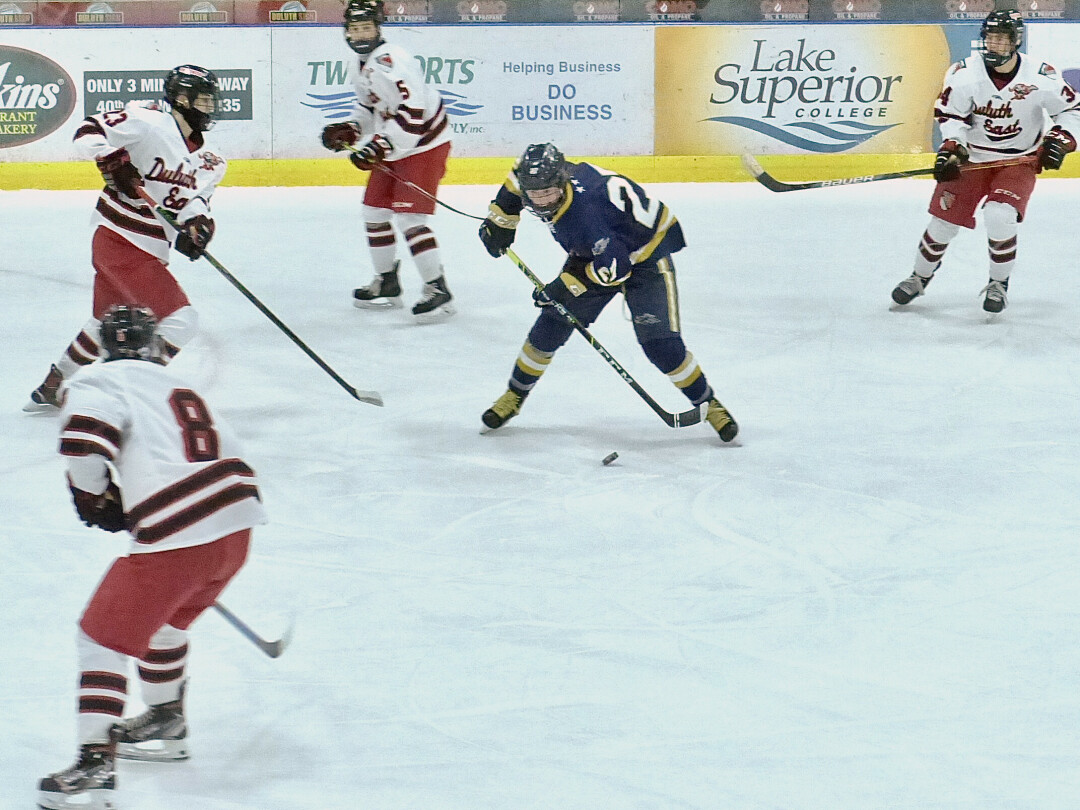 The Hermantown Hawks flew through last week without any apparent pressure, as if they didn’t know they were in the midst of the most impressive week in the program’s long and rich hockey history.

Coach Pat Andrews seemed surprised after last Thursday night’s game when I suggested the Hawks had just completed their biggest pair of victories ever. Have they ever won two bigger games?

“Well, maybe in some of our state tournaments,” he said.

No, Pat. You just finished beating the two most successful current AA programs in Section 7 – Duluth East and Grand Rapids – back to back, two days apart.

The skilled and deep Hawks beat Duluth East 5-1 on Tuesday at Essential Heritage Center, then went home to beat previously undefeated Grand Rap-ids 5-3, with an empty-net goal on Thursday.

In a normal season, it would not be a surprise to see East and Rapids play in the 7AA final, but this year Herman-town has turned the hockey world upside down –  a Single-A power beating both of the AA icons.

Hermantown fans and area hockey boosters have wanted to see Herman-town get a shot at Duluth East, the most successful 7AA program, for years. 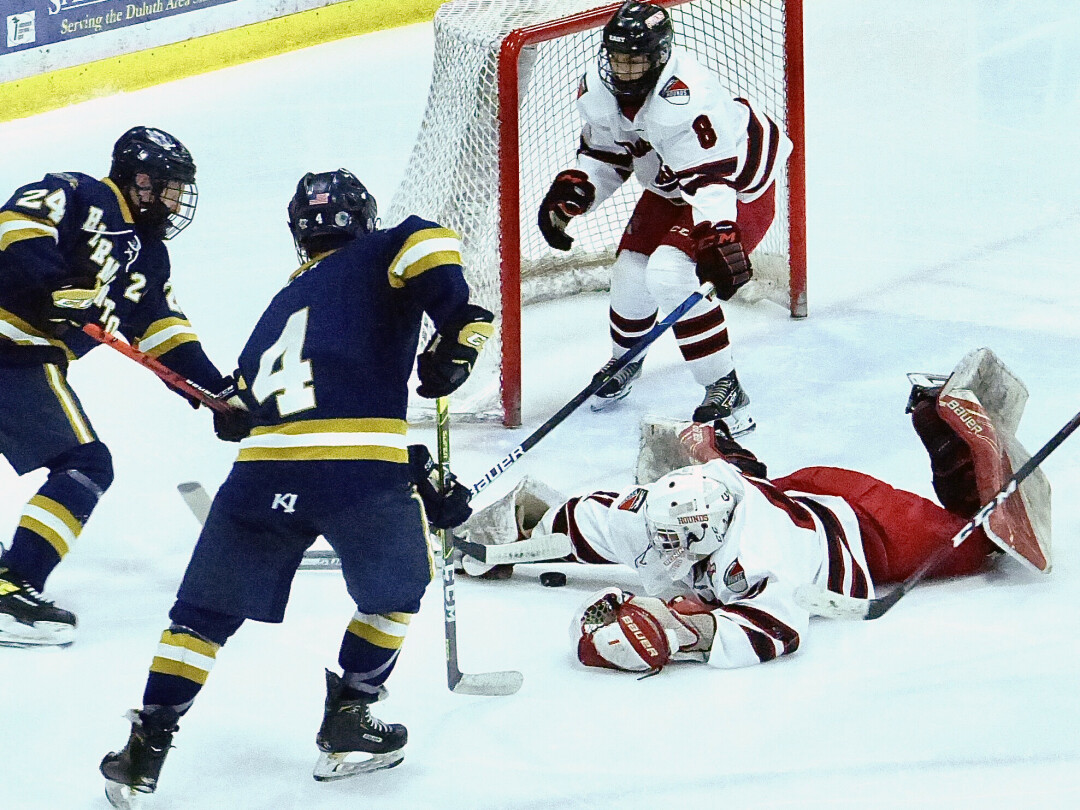 Hermantown’s Ethan Lund (24) and Wyatt Carlson tried to get to the puck before East goaltender Zander Ziemski could cover it in the Hawks 5-1 victory at Heritage Center.

Mike Randolph, East’s coach for 33 years, with 18 of them culminating in a state tournament trip, always had a simple challenge for Bruce Plante, the architect of the Hermantown program, and predecessor to Pat Andrews as Hawks coach.

“Simple,” Randolph would say. “Move up to Double A and we’ll play you, every year.”

East traditionally plays the toughest schedule in the state, always taking on Edina, Eden Prairie, Hill-Murray, Moor-head Maple Grove, Centennial, Minnetonka – you name an AA power, East will have them on the schedule.

But this year, with the Coronavirus pandemic curtailing East’s usual tra-vel for such games, it was time to stay close to home, so East scheduled Hermantown for two games.

The first meeting between the two in this century was last week, and the Greyhounds were in for a rocky night against what might be the best Hermantown team ever.

The Hawks have no weaknesses, with swift, skilled forwards, tough, agile and speedy defensemen, and if goaltending was the only question, it was answered last week.

Up front, Aaron Pionk, Aydyn Dowd, Cole Antcliff, Wyatt Carlson, Ethan Lund and assorted others, are bristling with firepower. Then you add sophomore Zam Plante, who has stepped in and brought Hermantown’s second line and power play to life. He ended last week with 21 goals, 17 assists for 38 points to rank among the state’s top scorers, and bolsters the already potent offense. 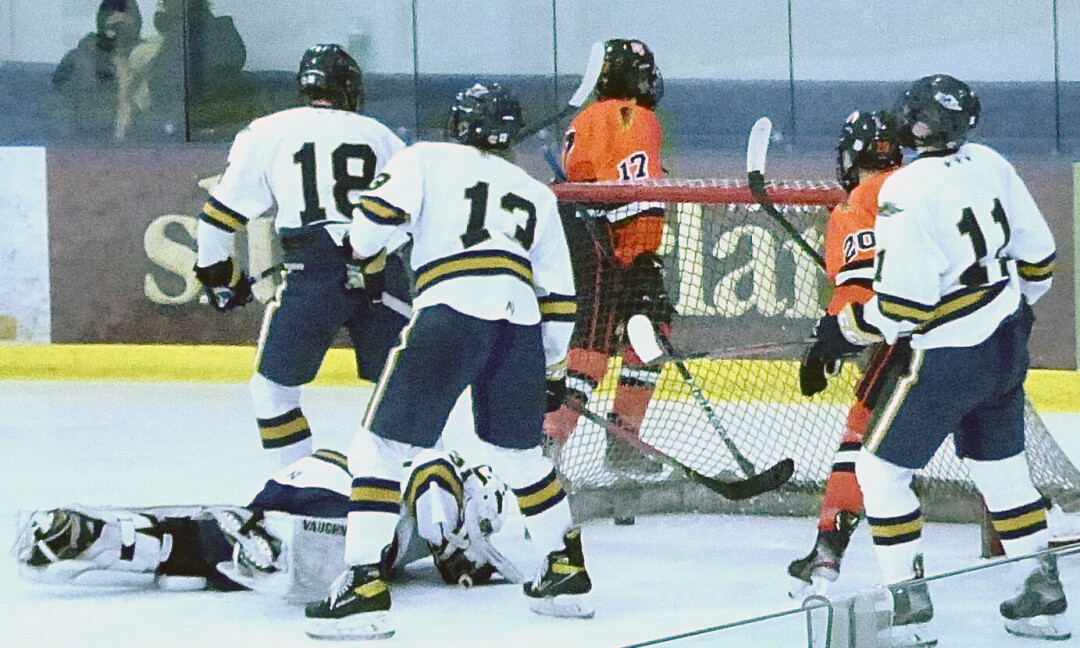 On defense, Joey Pierce, who has already committed to UMD, pairs with sophomore Ty Hanson, a quick, smart skater who will be one of the best defensemen in school history sooner rather than later, and the rest of the D-corps can stifle opponents and contribute to the offense. Goaltender Garron Opsahl and the defense finally got the chance to prove their worth last week.

If there was any tension in the game against East, it lasted only 19 seconds, which was all it took for Pionk – whose brother is playing in the NHL – to score for the Hawks, with wingers Dowd and Antcliff assisting.

One line change, and Lund scored at 1:39. At 9:39 of the first, Pionk fed back to Pierce, who bombed a shot from long range that beat sophomore goaltender Zander Ziemski for a 3-0 lead.

If the Hounds regained their equil-ibrium in the first intermission, Dowd knocked them off-balance again with a short-handed goal halfway through the second period before East got on the board.

Kaden Nelson, a junior who is East’s top scorer, got a goal with sophomore linemates Cole Christian and Grant Winkler assisting. They are among a strong crop of six or seven sophomores helping Randolph rebuild after a gap year or two in the traditional current of east-end talent flowing into East’s program.

With the score 4-1 after two periods, Plante scored just 1:36 into the third period. Capable of game-breaking goals, the oldest of three sons of UMD assistant coach – and former UMD star and NHLer – Derek Plante, is also extremely dangerous any time the puck comes free in the offensive zone, completing a 5-1 tally.

Hermantown outshot East 46-16, and only East goalie Ziemski’s strong play kept it that close.
“I was proud of the effort our guys made,” said Randolph. “When you get behind like we did, you can’t play to the scoreboard, you’ve just got to play shift after shift. We’re young and we’re learning, although in our next game, we went down to Minnetonka and got down 3-0 in the first period, too, and we came back to outscore them 2-0 in the second period. But we gave them a 2-man power play and lost 4-2.”

It is rare to see East outshot 46-16 by any team, but the Hawks had plenty left in the tank for their return home to face Grand Rapids, which was unbeaten at the time and had gone to the Twin Cities the previous weekend and beaten Hill-Murray, which was fresh from beating Edina 3-0 and 3-0 in home and home games. 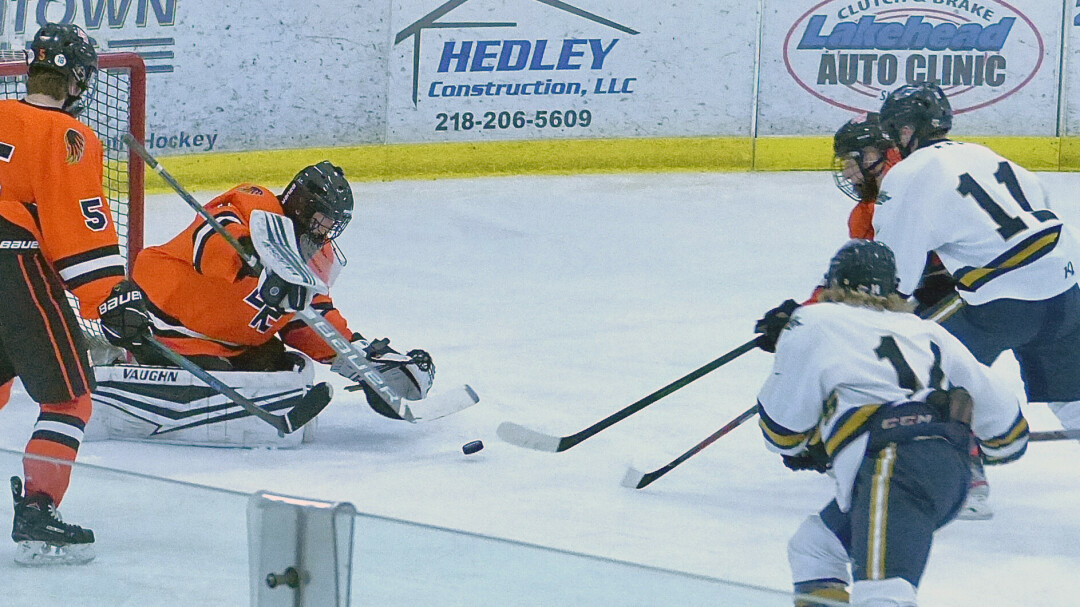 Grand Rapids goalie Wyatt Pilkenton dived for the rebound as Hermantown’s Aaron Pionk (11) and Cole Antcliff (14) raced in, but it was partially hidden Rapids defender Joey DelGreco who cleared the puck out of danger.

The Thunderhawks, with strength, balance and depth, put immediate pressure on Hermantown, and Garett Drotts scored from a scramble at the left edge at 4:38 for the early lead.

Five minutes later, Zam Plante swiped the puck in the Rapids end, whirled for a shot but instead fired a pass across the goal-mouth where Antcliff had an open net for a 1-1 tie.

In the second period, star Rapids defenseman Jack Peart set up Justin Kerr for a 2-1 lead in the first three minutes. Again the Hawks tied it on a slick play when Dowd got the puck in the neutral zone and feathered a pass behind the Grand Rapids defense, inspiring a burst of speed by Plante, who was just in time for a breakaway. A close-in deke and he scored at the right edge at 7:01 to make it 2-2.

At 12:18, Plante circled back to his own end for the puck on a power play and skated up at medium speed, looking for someone to pass to.

From the bench, assistant coach Chad Huttel yelled, “Go!” and in a flash, Plante shifted to top speed, crossed the Rapids blue line and whistled a 50-footer past goalie Wyatt Pilkenton for a 3-2 Hermantown lead.

This time it was Grand Rapids’ turn to come back, and Peart made the play to Hunter Bischoff, who scored at 14:15 to tie the game again, at 3-3.

The game swung back and forth through the third period, headed for an apparent overtime. Andrews did a little line juggling and sent Plante, who usually centers the second line, out with first-line center Pionk with two minutes to go in regulation.

Nelson, the sophomore defenseman, moved in and fired a shot that glanced to Plante, deep on the right. Instantly, he jammed the puck off the goalie, and it squirted into the left side of the crease.

Pionk will never have an easier goal, rapping in the 2-foot putt, with 1:45 remaining to break the 3-3 deadlock. Dowd ended the drama with an empty-net goal with 13 seconds left for the 5-3 final.
“We’ve been waiting for a good game like that,” Pionk said. “We knew we’d get behind sometime.”

The Hawks emerged from the battle of unbeaten teams at 10-0 going into Tuesday’s test against Denfeld, while Grand Rapids left the rink 7-1.

Hermantown faces rematches against both East and Grand Rapids, but regardless of what happens then, Andrews appreciated what last week meant to the Hermantown program.

“We had only beaten East once before,” he said. “And this was like a playoff game with Rapids.”
East coach Randolph, whose Greyhounds got headed the right direction with a 9-1 rout at Marshall Monday, praised the Hawks. “They have built a perfect Double-A program,” he said. “Now all they have to do it move up to Double-A.”

Beating the two best programs in AA means Hermantown is the best team in Section 7, whether A or AA, and it makes the Hawks’ proven formula of playing and beating top AA teams to prepare for going back down to blast legitimate A teams at tournament time seems more of an injustice than usual.
Huge week for UMD men,women

UMD proved conclusively how strong the NCHC is when Western Michigan whipped them, decisively, 4-0 and 4-1 last weekend in Kalama-zoo.

Suddenly, the Bulldogs hopes to win the NCHC have vanished, with only three games remaining – Thursday against Colorado College at AMSOIL Arena, and the final weekend home-and-home set with St. Cloud State. Having scored 28 goals in six straight victories, the sudden goal drought couldn’t have come at a worse time.

Beating CC Thursday night would help UMD’s cause, to get ready for St. Cloud State and then the NCHC playoffs.

The UMD women are either hope-lessly out of contention – or they have a chance. Extremely thin as it may be, there is that sliver of hope, as they return to action at AMSOIL Arena Friday night and Saturday afternoon against Minnesota State Mankato.

After that, all that remains is a closing series at AMSOIL against top-ranked Wisconsin.

Coronavirus cancellations won’t be made up, so when UMD had two games at Minnesota and two more at Wisconsin canceled, I made the remark that if UMD could find a way to get the final series against the Badgers canceled too, the Bulldogs could win the title.

That was a sarcastic joke, but check out the current scenario: Wisconsin is 11-2-1 in first place, and is idle until the final weekend series at UMD. The Bulldogs are 8-4, with the cancellations at Mankato, at Wisconsin and at Minnesota.

Wisconsin ’s idle this weekend, and only has those two remaining games at UMD; UMD faces MSU Mankato this weekend, and then the Badgers. If UMD could sweep Mankato, UMD would be 10-4, and if they then somehow swept Wisconsin, the Bulldogs would finish 12-4 and Wisconsin 11-4-1. By my math, that would make UMD the champion!