A trip to the Lorraine Motel 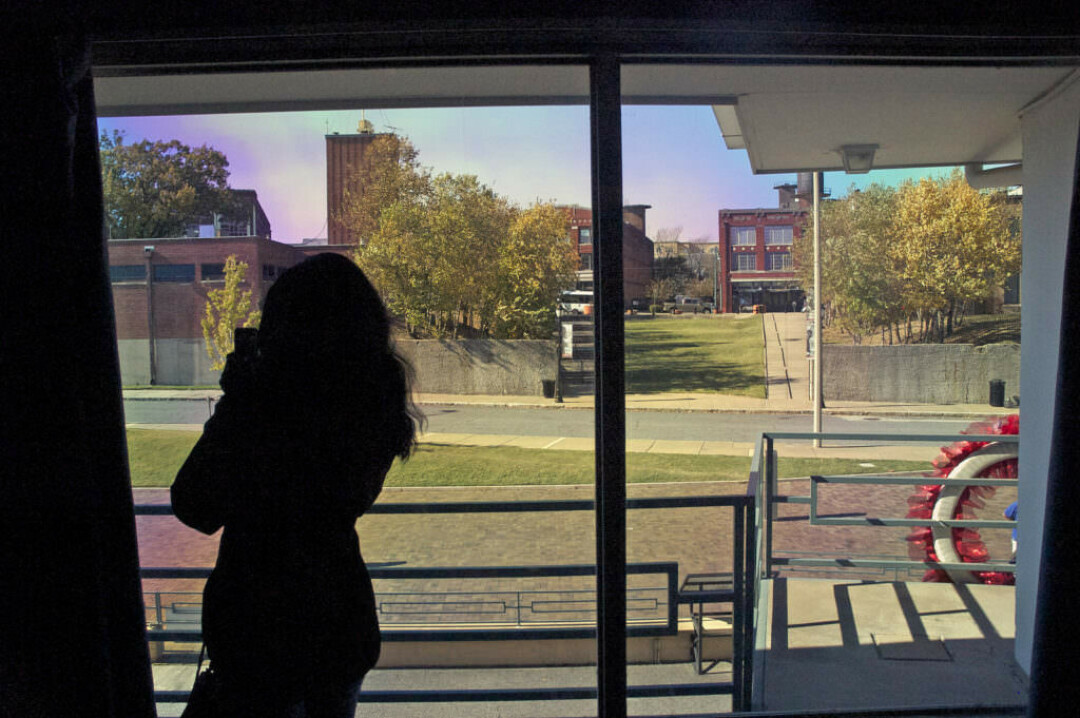 A woman is silhouetted against the balcony of Room 306, the room of the Lorraine Motel in Memphis where Martin Luther King, Jr., was assassinated in April 1968. The room is the only thing that remains of the hotel. The rest of the building is now the National Civil Rights Museum. Photo by Jim Lundstrom.

Editor’s note: This week we received from one of our services a story on touring iconic civil rights locations in the South. The reminded me of my post-2016 election vacation to Memphis. A friend who also worked for newspapers – not the same one as me – and I decided to take a vacation together the week after Trump was elected because we felt like we needed it. We decided to drive to Memphis. Neither of us have any connection to the city other than both of us being interested in music and civil rights, so, yeah, let’s spend a week exploring Memphis. I wrote several stories about the experience and the shock of seeing rebel leaders revered in statuary throughout the city, but we reproduce this story from 2017 in honor of Black History Month:

Perhaps the most telling personal moment between Martin Luther King, Jr. and his wife, Coretta Scott King, in the 2014 film Selma comes in a scene where she says she is feeling oppressed by “The constant closeness of death.”

During the brief 13 years he served as the moral beacon of the civil rights movement – from the Montgomery bus boycott of 1955 to the Poor People’s Campaign he was organizing at the time of his assassination on April 4, 1968 – King and his family knew they lived in the crosshairs of violent white supremacists and other assorted crazies.

After earning his doctorate from Boston University’s School of Theology, in 1954 King became pastor of Dexter Avenue Baptist Church in Montgomery, Ala. He and Coretta, who were married in 1953, moved to Montgomery and had the first of their four children, Yolanda.

King immediately got the attention of black leaders in Montgomery. When the Montgomery Improvement Association was formed to protest the Dec. 1, 1955, arrest of Rosa Parks for refusing to give up her seat on a bus to a white man, the 26-year-old King was chosen to lead the group.
While speaking at a rally 13 months later – and just months short of the Supreme Court decision against transportation segregation – on the night of Jan. 30, 1956, a bomb went off on King’s front porch. Coretta was home with 10-month-old Yolanda, but they were not injured.

That was just the first of many threats and actual assaults on King and his family during those dark times.

At a Harlem bookstore in September 1958, where King was signing copies of his book about the bus boycott, Stride Toward Freedom, a demented woman stabbed him in the chest with a letter opener, just missing his aorta.

Throughout the 1960s, white supremacists allegedly had a bounty on King’s life. A 2012 book, The Awful Grace of God: Religious Terrorism, White Supremacy and the Unsolved Murder of Martin Luther King, Jr., claimed that King’s assassin, James Earl Ray, hoped to collect a $100,000 bounty on King’s life that was being offered by the Ku Klux Klan.

The importance and enormity of King’s work can be better understood when you think how hard it is for us today to conceive of living your life under constant threat of death in America simply because of the color of your skin.

As a boy growing up in Duluth, I struggled to understand why the apparent hatred I saw regularly on nightly news between white and black was so deep.

Thursday evening of April 4, 1968, is burned into my brain. We were watching Walter Cronkite report on the assassination of 39-year-old civil rights leader Martin Luther King Jr. – “Dr. Martin Luther King, the apostle of non-violence in the civil rights movement, has been shot to death in Memphis, Tennessee,” – when my mom took a phone call informing her that a good friend had just committed suicide and was found dead in the garage by one of her two young daughters.

Those two tragic events were inextricably melded in my 12-year-old mind, making the assassination of Rev. King even more personal for me. The image of his colleagues pointing in the direction of the gunfire from the balcony of the Lorraine Motel immediately after the shooting often floats up to the surface, unleashing a flood of emotions.

So, on a recent impromptu trip to Memphis, a visit to Mulberry Street and the Lorraine Motel was on the agenda. We walked the mile from our downtown hotel on B.B. King Boulevard to the Lorraine, the façade of which still stands today on Mulberry Street, but as part of the National Civil Rights Museum, not a motel. 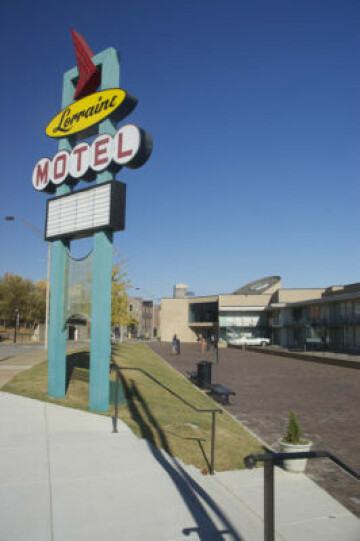 The sign for The Lorraine Motel still stands in front of the National Civil Rights Museum on Mulberry Street in Memphis. Photo by Jim Lundstrom.

Besides the façade and the classic standalone sign, the only other thing that remains of the Lorraine Motel is Room 306, the room King was sharing with the Rev. Ralph Abernathy when he was killed.
Well, there is one other remnant of the old Lorraine. Jacqueline Smith has sat at a corner across the street from the museum every day since before the museum opened in 1991, protesting that its concept is too Disneylandish and that it focuses on the morbid and the negative rather than the progressive and positive message of Rev. King. Smith was the manager and the final resident of the Lorraine, and had to be physically removed from the property by police when it was shut down. Although I wanted to know more about her and her multi-decade protest, I decided instead to enter the museum with an open mind. Oddly, the photos I took of her and her longtime protest camp disappeared from my digital camera, as if I had never taken them – the first time something like that has ever happened.

You could immerse yourself for an entire day in the exhibits at the National Civil Rights Museum and still not be able to take it all in. The history of slavery and oppression shares space with triumphs of black America. Standing at the glass and looking out onto the balcony where King was killed 49 years ago sends a chill.

At the time of his assassination, the Rev. Martin Luther King was working with the Southern Christian Leadership Conference (SCLC) on what would be his last crusade, the Poor People’s Campaign.
The idea was to unite poor people of all colors “to assert and win their right to a decent life.”

While some in the SCLC thought the Poor People’s Campaign for economic equality was too amorphous to work, King described it as simplicity itself, saying, “It’s as pure as a man needing an income to support his family.”

At a meeting on Jan. 17, 1968, King said of the plan, “Let’s find something that is so possible, so achievable, so pure, so simple that even the backlash can’t do much to deny it. And yet something so non-token and so basic to life that even the black nationalists can’t disagree with it that much.”
It was the Poor People’s Campaign that brought King to Memphis in 1968. On Feb. 1, 1968, two Memphis sanitation workers were crushed to death by a malfunctioning garbage truck, causing a strike by the workers. The plight of the city’s sanitation workers really summed up the economic inequality King wanted to highlight and change with the Poor People’s Campaign.

On April 3, 1968, Martin Luther King gave his final speech at the Bishop Charles J. Mason Temple in Memphis. It included this chillingly prophetic statement: “Well, I don’t know what will happen now; we’ve got some difficult days ahead. But it really doesn’t matter with me now, because I’ve been to the mountaintop. And I don’t mind. Like anybody, I would like to live a long life – longevity has its place. But I’m not concerned about that now. I just want to do God’s will. And He’s allowed me to go up to the mountain. And I’ve looked over, and I’ve seen the promised land. I may not get there with you. But I want you to know tonight, that we, as a people, will get to the promised land. And I’m happy tonight. I’m not worried about anything. I’m not fearing of any man. Mine eyes have seen the glory of the coming of the Lord.”