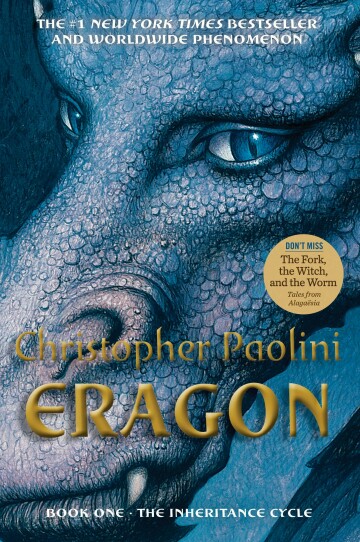 Have you ever wondered how a book gets on the New York Times Bestseller’s list? I am thinking specifically about a book entitled “Eragon.” I picked it up on sale at Barnes & Noble. I like fantasy. It had a dragon on the cover and it was a bestseller, so I couldn’t go wrong.

But I could. It’s not to say that Eragon was a terrible book, just a blah book. It was like reading Goldilocks and the Three Bears for the 100th time. You know what every character is going to do and what they are going to say.

It read like an adolescent boy’s dream, which is what it was. Christopher Paolini began writing it at age 15 and had it published when he was 19, and I’m sure he thought that any teenager who put in the time could do the same. And of course, he could, if he had two doting parents who also owned a home-based publishing business. So they published and promoted it, and it was read by an established novelist who brought it to the attention of big-time publisher Alfred A. Knopf. I’m sure Alfred A. Knopf turned down better manuscripts while they published this drivel.

Paolini is a smart and talented person. He spent a lot of time thinking about his book, even doing the artwork for it. The question is, would this book ever have been published without the considerable help of his parents? I think not.

The best way to find a book is to get a recommendation from someone you know and trust has the same taste in books, but you seldom have that luxury. The New York and London Reviews will talk endlessly about SERIOUS books, but if you’re looking for something on the lighter side, you’re out of luck.

Recommendations from favorite authors might be next, but I suspect most authors are going to be as kind as possible to a fellow writer, so sometimes you just have to read the publicity, and that is often all you have to go on. I suspect that Eragon had plenty of publicity, too, again from the proud parents..

They even got a movie deal for it. The movie was as bad as the book, and it made money, but not enough to warrant a sequel. I understand he has written that sequel now. I hope he has matured as a writer, but I’m still not buying it.

With all the time I have available for reading in this pandemic year, I have been busy in the used book market. It allows me to browse through books I might not have bought otherwise, and find some authors whose work I enjoy. I am particularly fond of comic syfy/fantasy, and the first three authors I found: Tom Holt, Terry Pratchett and Christopher Moore, have seldom disappointed me. I especially like Holt’s books on the multiverse, although “When it’s a Jar” was very confusing, and I’m still trying to figure out the ending.

I especially liked Pratchett’s books on the residents of Ankh-Morpork. I like best the ones with Rincewind, the inept wizard with the Traveling Luggage. The books about the witches of Lancre are not as interesting to me, although they are still enjoyable enough, and well written.

His books about Death are interesting. Death, who always SPEAKS IN CAPITAL LETTERS, is not a bad person, he’s just doing his job. He has no feelings for anything or anybody, although in “Mort” he has an adopted daughter for some reason. In “Reaper Man” Death gets fired and has to get a life. I haven’t started on that book yet, so I’m curious as to who can fire Death.

Moore’s books have not been as consistent. I found “Fluke” pretty confusing. It’s not clear what was keeping all these people from just leaving. I enjoyed the vampire books, but wasn’t too happy the way they ended.

On the whole, I enjoyed the books involving the characters in Pine Cove, California. “Lust Lizard of Melancholy Cove, “”Island of the Sequined Love Nun.” and “The Stupidest Angel” all had some recurring characters.

“Lamb” sounds like a good idea, but I guess I’m just not crazy about religious themes. There were few laughs in this book.

I have just received a few of his books on Shakespearian themes which I plan to read now, called “Fool,” “The Serpent of Venice.” and “Shakespeare for Squirrels.”

The most disappointing author was Martin Millar, whose book “Good Fairies of New York” was one of my very favorite books. The next book I read by him, “Suzy, Led Zeppelin and Me” was horribly boring. Maybe if I was a HUGE Led Zeppelin fan, I might have enjoyed it more. I like their music well enough, but not enough to read an entire book about waiting to see them. I also bought 3 other books by Millar, 2 about a werewolf girl, and “Lux the Poet.” The werewolf books were not bad, although I don’t understand why there has to be a Werewolf Hunters Guild to shoot fashion designer werewolves. There seems to be little concern about the slaughter of werewolves and werewolf hunters in London. There is a third book, but I don’t know if I will buy that yet until after I read the Lux book.

I’ve seen a few reviews of Robert Rankin books saying how funny he is. Well, I’ve only read one book: “Sex, Drugs and Sausage Rolls,” which might have been funny to me if I was14 again. If you think women who read palms and penises is funny, then this is the book for you. At least, this book is apparently NOT on the Bestseller’s list. As for myself, I will hold off buying any more of his work.

P. G. Wodehouse, of course, is pure comedy, but he is in a class by himself. I found my first Jeeves book at the public library when I was still in junior high. I was hooked from then on, and read everything I could find by him. Hugh Laurie and Stephen Fry did a turn as Bertie Wooster and Jeeves on TV which was pretty enjoyable.

I have VCR tapes of that, which will be fine as long as my VCR player holds out. I suppose VCR players will be as hard to find in the future as 8-track tape players.