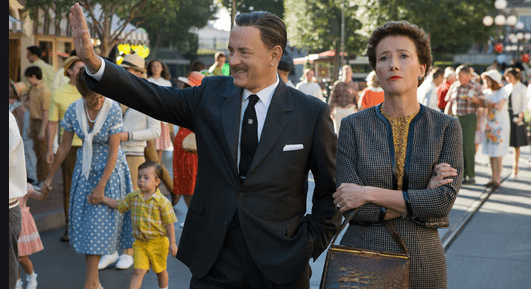 Mary Poppins author P. L. Travers (Emma Thompson) is not happy that Walt Disney (Tom Hanks) has tricked her into visiting what she refers to as his “money-making machine” – also known as Disneyland – in the briliant 2013 film Saving Mr. Banks. The movie disappears from Netflix on Feb. 28, so catch it soon.

To get across what this week’s movie meant to me, I have to relate a story of childhood trauma, also related to a movie.

It was late summer of 1964. My single working mother was forced to hire a live-in nanny to care for us four children, me the eldest, my two sisters and my not-yet 2-year-old brother. The nanny’s name was Etta, and it was only later that my mom learned Etta had recently been released from a mental hospital (I fear we kids might have sent her back!).

The way I remember it, Etta became our mortal enemy because of Mary Poppins. The movie had just come to Duluth and she said she was going to take us. I knew nothing about Mary Poppins, was not familiar with the P. L. Travers novels, but I think we did know it was a Disney movie, so it had that going for it in our young minds.

I think we had walked less than a block toward the bus stop when one of us did something Etta didn’t like. I don’t recall what it was, but she stopped us, said we would not see Mary Poppins and turned us around for home.

That started a war. We would do things like put the toilet plunger under the covers on her bed or have our little brother Mike throw things down the stairs at her.

Etta finally was asked to leave when my Mom came home from work one night and found the nanny had me pinned to the kitchen floor.

When I had the opportunity to interview Julie Andrews when she was going to perform in Green Bay sometime earlier in this century, I told her a very short version of how I finally came to see Mary Poppins and how much I loved it. She was very sweet about it and indulged me by talking about a movie so far in her past.

I love Julie Andrews as Mary Poppins. I love Dick Van Dyke’s terrible cockney accent. I love Ed Wynn and his love to laugh song. And all the songs are fun.

So, I was quite happy to recently run across on Netflix a 2013 movie that had completely escaped my notice when it first came out (not unusual, since I pay more attention to movies of the past than of the present).

It is called Saving Mr. Banks, and it tells the story of Walt Disney (Tom Hanks), after 20 years of negotiations, finally getting permission from novelist P. L. Travers to turn Mary Poppins into a movie. As played by the great Emma Thompson, Ms. Travers has dreaded giving up her most perfect nanny to someone else’s control, but she needs the money.

There are beautiful moments as the doubting Travers is eventually won over by the songwriting Sherman brothers (Jason Schwartzman and B. J. Novak) and their peculiar way with the English language. When she first meets them, she says they won’t be around long because “these books don’t lend themselves to chirping and prancing.” (Emma Thompson has all the best lines in this movie.) She has already told Disney in their first meeting, “Mary Poppins does not sing.”

But the Sherman Brothers finally win her over in a scene where they perform the movie’s redemptive final song, “Let’s Go Fly a Kite.”

She is also adamant that their will be no “silly” Disney cartoon characters in her movie. When she learns about the animated dancing penguin scene with Dick van Dyke, Travers blows her top and storms into Disney’s office – catching him smoking a cigarette, which he preferred to do in private – and accuses him of being a trickster and a fraud, and accuses him of trying to seduce her with the Sherman boys. “But I shall not be moved on the matter of cartoons, not one inch.”

Disney eventually wins her over by believing her when she tells him, “Mary Poppins and the Bankses are family to me.” That is something he can understand, because he feels the same way about the creation that built his empire, Mickey Mouse.

Hanks gives a sly turn as cartoon mogul Disney and his attempt to win over the irascible novelist is fun to watch. It’s his own daughters who spur him on to turn Mary Poppins into a Disney movie. “You don’t break a promise you made to your kids,” in trying to convince her to sign a contract allowing him to use her work for his film.

Thompson’s sharp reproaches to everything Disney are hilarious. “Where,” she says while talking of the script, “is the gravitas?”

The title, of course, refers to the adult male lead of Mary Poppins, George Banks (David Tomlinson), the revelation from Travers being that Mary Poppins is not there to save the children but to save Mr. Banks, and who, it turns out in a parallel flashback storyline of her childhood, represents the author’s own ne’er-do-well father, Travers Goff (played by Colin Farrell).

Paul Giametti has a touching role as Travers’ unflappable chauffeur Ralph while she is in LA working on the screenplay. His scenes with Thompson are beautiful to watch. At one point she tells him, “You’re the only American I’ve ever liked, Ralph.”

Ultimately, it is the meeting of wills between Disney and Travers that makes this work. Thompson’s Travers is crusty tough, sharp and uncompromising. She struggles to understand Disney’s boyish yet pure businessman view of life.

“What horrors have you in store for my beautiful characters today,” Travers says as she walks into the conference room with scriptwriter Don DeGradi (Bradley Whitford) and the Sherman brothers. This is the start of the “Let’s Go Fly a Kite” scene. The way she is swept up into the song is reminiscent of Mr. Banks own awakening in Mary Poppins.

The penguin cartoons are the final straw for Travers. She packs him and goes home to London, leaving the unsigned contract on Disney’s desk. But Disney takes the next flight to London and goes to Travers’ house to try to convince her how badly he wants to make Mary Poppins and uphold the promise he made to his daughters two decades before.

Now that Disney finally understands that Travers came from a troubled background, and that she changed her name from Helen Goff to P. L. Travers – taking her father’s last name as her first name – he realizes Mr. Banks represents Travers’ own lost father, and that her tale of the super-efficient nanny sorting out troubled lives is her way of dealing with her own past.

“That’s what we storytellers do,” Disney tells her. “We restore order with imagination.”