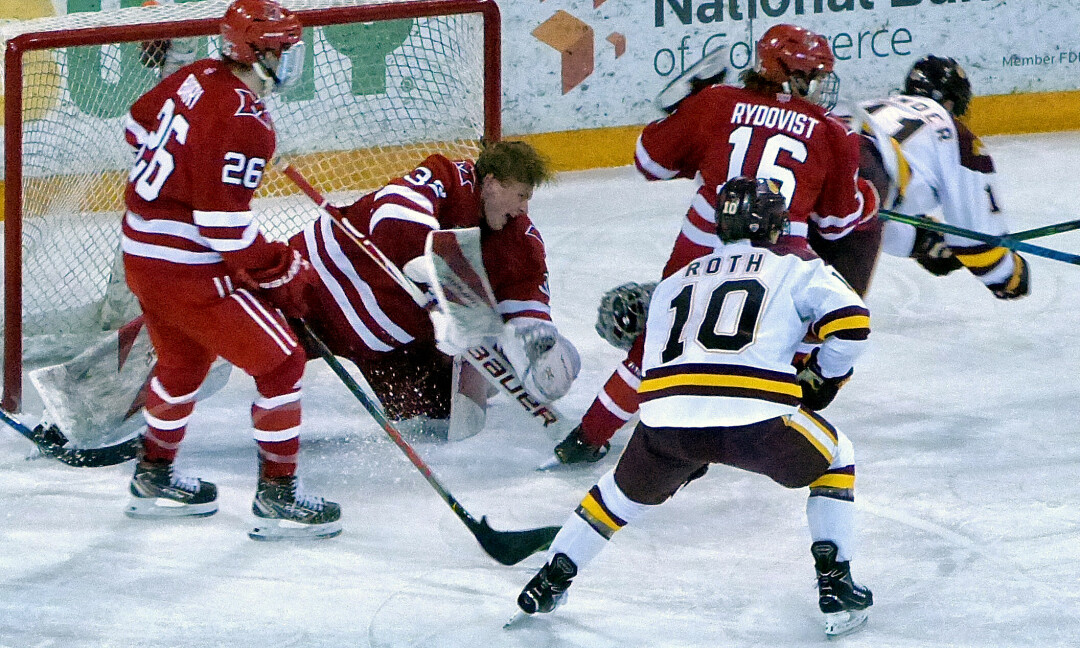 UMD's Koby Bender (11) flew past the crease after knocking Miami goalie Ludvig Persson's mask and helmet off. Persson made a record 55 saves, 27 of them in the first period, and Bender was ejected for contact to the head. Photos by John Gilbert.

The biggest game of the year became the Tom Brady Show, and it didn’t live up to the hype, because, frankly, there is so much hype about the Super Bowl that nothing could live up to that.

Brady was nearly perfect, having taken his six Super Bowl rings and left New England behind to go to Tampa Bay and lead a team that was 7-9 a year ago to a 31-9 romp over defending champion and favored Kansas City.

The biggest games, for example, in college hockey were Friday and Saturday at AMSOIL Arena, where the surging UMD Bulldogs swept both games from Miami of Ohio, shattering some scoring records in an 8-1 first game as Cole Koepke scored a hat trick, Kobe Roth added two, and Jackson Cates put up five assists.

The next day, Miami played much more forcefully, but the Bulldogs won their sixth straight game 3-1, getting an empty-net clincher but also registering a 58-31 shot barrage that included 28 shots in a 1-0 first period.

It was a strange series, made stranger, of course, by the absence of fans at AMSOIL. Miami came out hot and scored an early goal, but a review convinced the officials a Red Hawk had interfered with goaltender Ryan Fanti and the goal was disallowed.

UMD was getting outshot 6-1 when the fourth line got a turn, at 9:10, and freshman Blake Biondi scored on shot No. 2 for a 1-0 lead. A couple minutes later, Jackson Cates, who had assisted Biondi, also assisted Kobe Roth for a 2-0 lead.

At 15:39, Tanner Laderoute fed Koepke who submitted his new-found specialty, which is a wide-angle shot from deep on the left that somehow zips in on the short side, and it was 3-0 against beleaguered Miami goaltender Ludvig Persson. 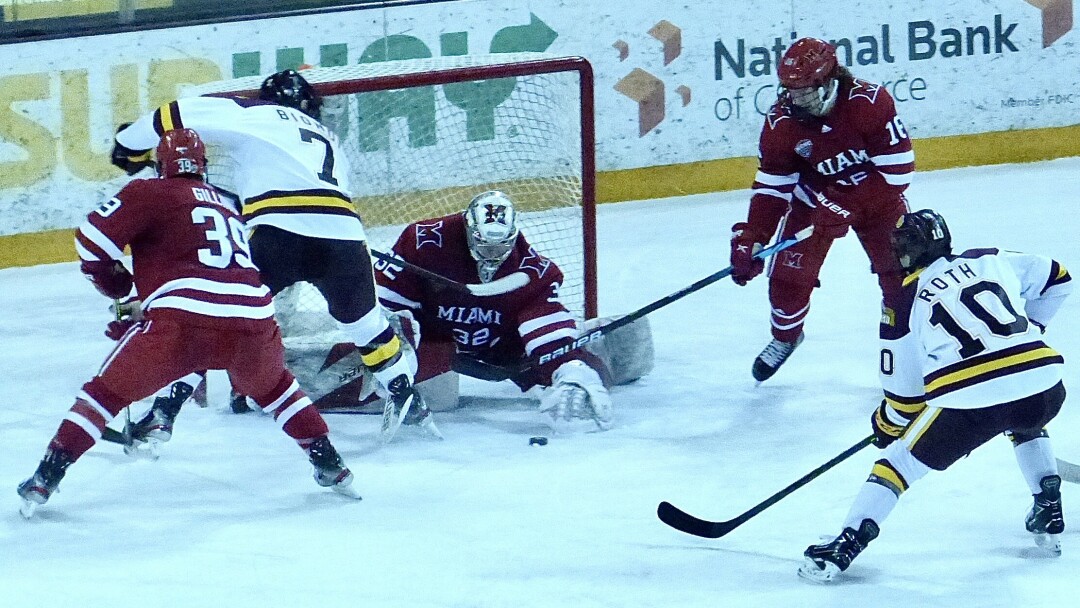 Miami goaltender Ludvig Persson reached for Blake Biondi's rebound before UMD's Koby Roth could get to it in Saturday's game.

Two minutes after that, Kobe Bender scored from the top of the right circle and it was a 4-0 first period, as UMD got off the last eight shots and made half of them count.

When Nick Swaney scored at 0:54 of the second period, Persson, a freshman from Sweden, went to the bench for Ben Kraws, having yielded five goals on 10 shots. He was treated rudely, as Koepke scored at 11:49 on a power play and again at 17:07 to complete his hat trick and make it 7-0. Casey Gilling broke through Fanti’s net minding on a power-play deflection at 3:02 of the third period, but Roth knocked in a Bender rebound at 9:43, with Jackson Cates notching his fifth assist.

That took care of the rust from being idled for two weeks, and the Bulldogs said they anticipated a much tougher game from the Red Hawks on Saturday. True, the Red Hawks came out at a much higher tempo, but the Bulldogs seemed to enjoy that pace, and 8 minutes into the first period, UMD had a 10-0 edge in shots, but the game was scoreless.

It was Swaney who deflected in a point blast by Matt Anderson at 12:53 to put UMD ahead 1-0, and while they went on to outshoot Miami 28-7 in the first period, Persson was phenomenal in goal.

This highlight was at 17:14 of the first, when the officials spotted a hook, then another then a third, and called all three of them. That gave UMD a 2-man advantage for a full two minutes, and a penalty shot as well. Laderoute, the recipient of the last hook, skated in on the penalty shot, but Persson stopped him.

The shots evened out in the second period a bit, but freshman Zach Stejs-kal, who played another strong game in spot duty, gave one up to Matthew Barbolini, who tipped in a center-point shot at 4:12 of the middle period.

The shots were 31-12 at that point, but the score was 1-1, and the gap in shots mattered less when the third period started and Koby Bender was tossed for contact to the head on goaltender Persson.

Bender came flying up the left side, turned the corner on the defense, and sped for the net. He shot, and when Persson went down to block it, he landed forward, out of the crease, and Bender clipped him, knocking his mask flying and requiring a long analysis by the officials before they issued a 5-minute major and DQ.

The shots were 44-19 at that point, and Persson regained his helmet and his bearings, but Cole Koepke, continuing to sizzle on the scoresheet, scored on a power play at 1:12 of the third period on another deep-left, short-side missile to break the 1-1 tie and give himself four goals for the series. Koepke made a neat move in the final minute, after Persson had been pulled and it was Stejskal’s turn to face big pressure.

Koepke broke up the right boards and made a slick pass to the slot for Roth, who quickly deposited it into the empty net for the 3-1 clincher. Shots wound up 58-31, so Persson had 55 saves. Both the shots and the saves were NCHC records.

The sweep was not the only huge college hockey series last weekend.

Consider that Minnesota, which had threatened to run away with the Big Ten race until losing twice at home to Notre Dame, was taking on Wisconsin, the most intense rival the Gophers have had in the last 50 years, and certainly the only rival they have had since the lukewarm Big Ten began play.

But right there in Mariucci Arena, the Gophers saw a 1-1 tie with 7 min-utes left in the first game turn into a 4-1 loss.

Then, instead of coming out snarling, the Gophers were flat from the start of the second game and were blown out of their own rink, 8-1.

Hard to believe, but the sweep lifts Wisconsin to first place in the Big Ten, a notch ahead of Minnesota, which could have interesting ramifications for whatever the NCAA decides to do with its national tournament seedings.

Playing in pods seems to be the word of the day, as the NCHC has decided to play its entire playoff at North Dakota’s Ralph Engelstad Arena in Grand Forks, the first weekend in March, with 8 vs. 1, 7-2, 6-3, and 5-4.

Last week’s men’s ratings offered no security, as No. 1 Boston College lost 3-1 to arch-rival Boston University for a split, after BC had won 4-3 in overtime in the first game; No. 2 Minnesota lost twice; and No. 4 St. Cloud State was ambushed by Western Michigan – this weekend’s UMD foe on the road – 5-4 in overtime for a split.

Incredible that right here in the stretch drive, three of the top five teams in the country went 2-4 against unranked opponents. 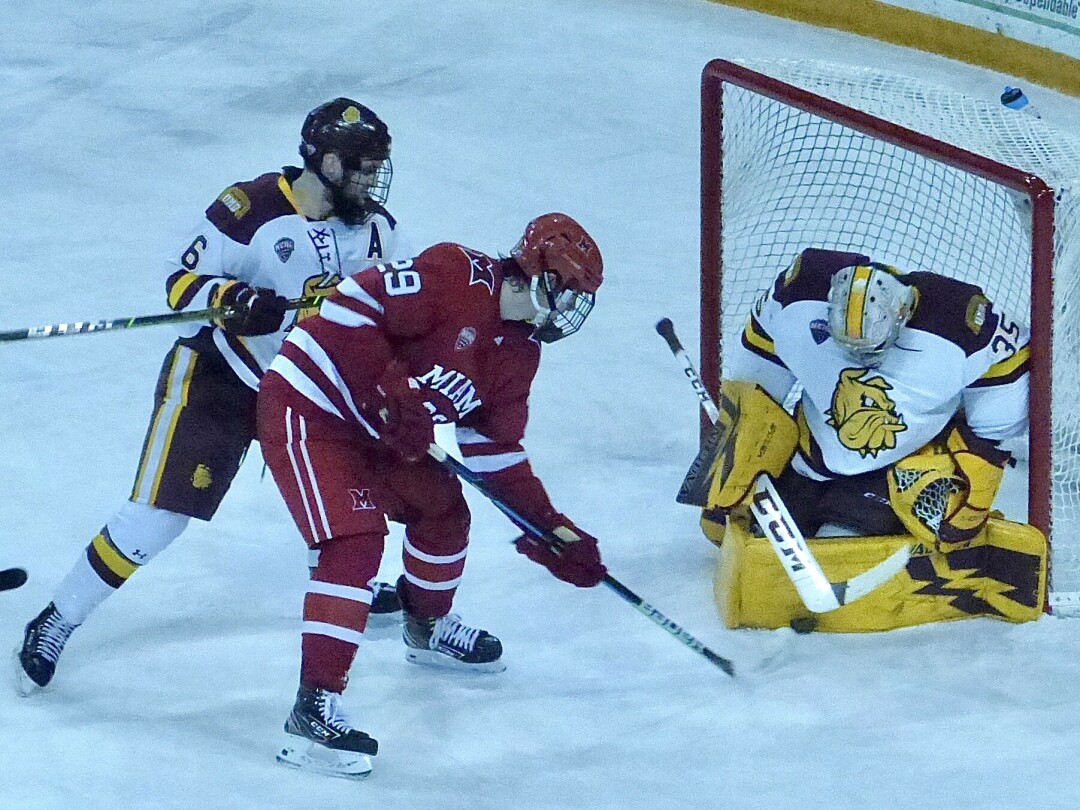 Freshman Zach Stejskal made the save on Miami's Matthew Barbolini in Saturday's 3-1 UMD victory.

All of that pushed the Bulldogs up to the No. 4 spot, behind only Boston College – which stayed No. 1 despite losing – No. 2 North Dakota moving up by being idle last weekend, and MSU Mankato taking No. 3 after sweeping Bowling Green to stay undefeated atop the WCHA, and the Bulldogs moving up to No. 4 ahead of Minnesota, which slipped from No. 2 to No 5, just ahead of No, 6 St. Cloud State, while the rest of the top 10 follow, 7. Wisconsin, 8. Michigan, 9. Massachusetts, and 10. Omaha.

Captain Noah Cates was given a 5-minute major Friday, and Bender got the 5 on Saturday, but the penalty killers killed everything, all weekend.

The may need to do that again at Western Michigan, which was swept by the Bulldogs last month, but just beat St. Cloud State last weekend.

At the risk of adding to the overkill of Super Bowl reviewing, we must pay full tribute to Tom Brady, the 43-year-old quarterback who plays with razor-sharp precision and is like a robot in his attention to detail. He took apart the Kansas City defense and left no room for any game-changing rallies.

And you and to feel sympathy for Pat Mahomes, the 25-year-old quarterback who is a perfect example of the new breed of quarterback threatening to take over and change the NFL forevermore. He was battered from start to finish, and unable to have time to locate his top receivers.

Brady was 21-29 for 201 yards – not much yardage, but his two touchdown passes to Rob Gronkowski were more than enough to put away the Chiefs. Mahomes was 26-49 for 270 yards, but no touchdowns. KC got an opening field goal, then added only two more field goals as the game wore on.

That is unheard of, and Mahomes called it the worst game of his life.

My only criticism about the game was that the officials seemed to be uptight, maybe from then pressure of the big game, but they called it very closely – at least on Kansas City’s side.

The Chiefs under Andy Reid have not been a dirty team, and they had never been called for more than three defensive holding and/or pass interference penalties in any full game. They were called for five of them in the first half Sunday. And they came at critical times, with one of them on a third and long that went incomplete but instead was an automatic first down, leading to Tampa Bay’s first touchdown.

Another call negated an interception that could have changed the game completely, and that was followed up with a pass interference call in the end zone that gave the Buccaneers a first and goal at the 1, and a touchdown that ended the first half.

We have gotten used to officials letting the players play in crucial big games, but they can call it tight or loose.

I saw several questionable pass interferences let go, and others called. Comparing both sides, Tampa Bay was called for 4 penalties for 39 yards, and Kansas City was called for 11 penalties for 120 yards. Huge discrepancy, and I didn’t think the Chiefs deserved such a disadvantage. I picked the Bucs and Brady, by the way, so it isn’t that I’m bitter Kansas City lost.

I don’t think they would have beaten Tampa Bay Sunday, but it might have been an exciting, close game all the way to the finish.