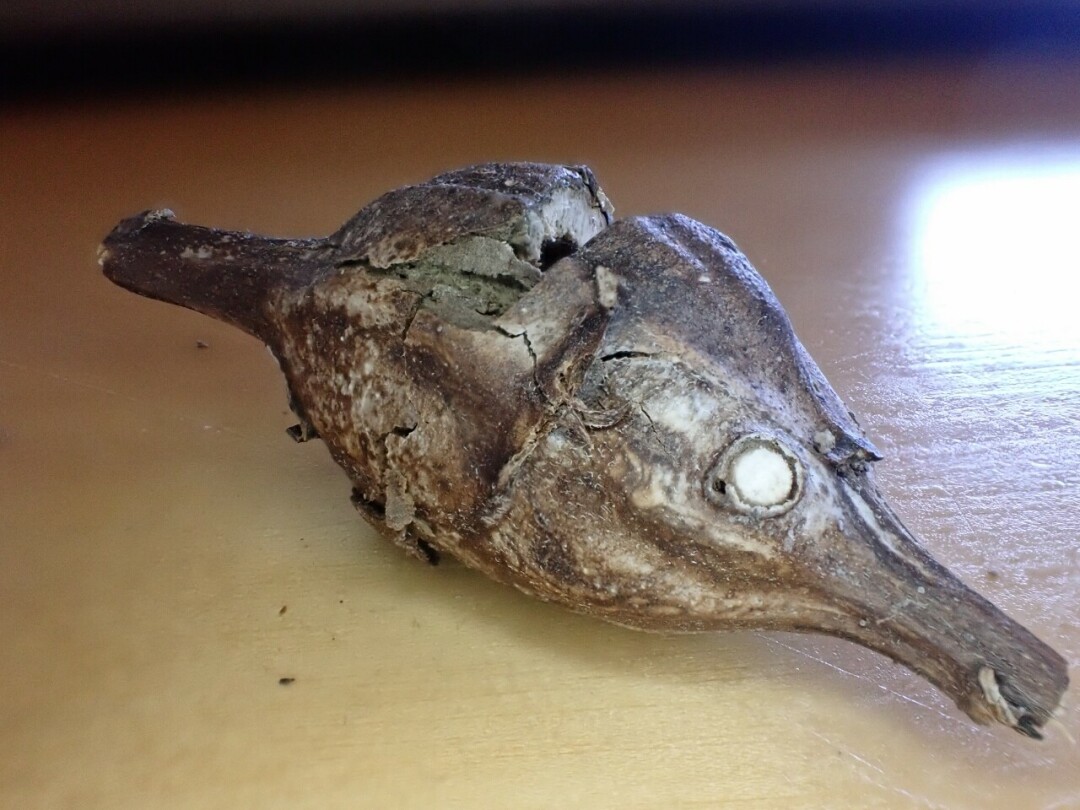 An elliptical gall formed by a gall moth on a goldenrod plant. Photos by Emily Stone.

Summer in the Northwoods can feel like a painting – broad sweeps of green and blue provide the backdrop for highlights in all colors of the rainbow. Winter, though, can feel like a pen and ink sketch, where shapes, textures, and patterns rule. I enjoy these shifts in perspective, since they can help me spot new things.

A little while ago I found myself in a weedy strip of vegetation between my friend’s driveway and a field. The colors of summer had all but drained from the thicket of goldenrod plants. Where once there were sunny yellow flowers tossing above a sea of green leaves, there now stood a sepia-toned jumble of fuzzy seed heads, crinkled leaves, and leaning stems. In this winterized sketch, I scanned the lines, looking for a particular pattern.

Goldenrod galls are small, round lumps that appear near the tops of the growing stems in response to the chewing action of insect larvae. Every year I collect a couple gallon bags full of these galls to use in our MuseumMobile lessons. With kitchen shears in-hand, I had soon accomplished my goal.

Many of the galls were the typical, spherical homes of goldenrod gall fly larvae. But as I started sorting through and cutting them open, I found one that didn’t match. It wasn’t much different – only slightly taller than wide, with some raised ridges. I knew that its real differences were hidden inside.

A sharp knife around the equator of the gall soon revealed a hollow center with a shiny brown shell rattling around. The shell was the dried out puparium (like a chrysalis) of the goldenrod gall moth – Gnorimoschema gallaesolidaginis – whose larva created this elliptical gall. 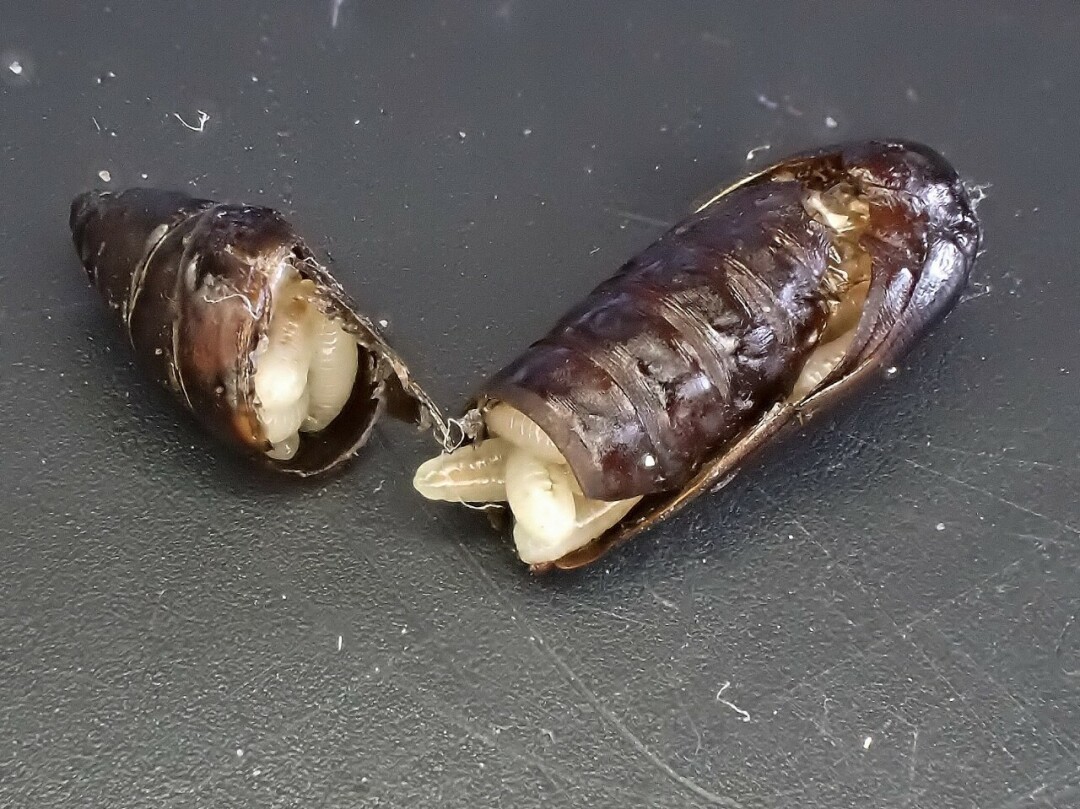 The shiny shell of a gall moth puparium—only 2 mm in diameter—cracked open to reveal a mess of tiny parasitic wasp larvae that ate their host.

As I rolled the thin, mummy-like shell in my fingers, it cracked open. The split did not reveal a metamorphosing moth pupa changing from larva to adult.

Instead, dozens of tiny, white, translucent larvae – each only about 2 mm long – spilled out of the hollow cylinder. Any normal person would have been grossed out. I was thrilled!

The moth larvae are parasites on goldenrod, and they themselves are victims of many different parasites. I wrote about this in 2017, when all I found was a hollow, hole-riddled shell, cleaned out by the larvae of a tiny wasp.

Based on some research and inquiries, these translucent larvae probably belong to a different species of tiny, parasitic wasp.

While wasps like these can’t sting us – their ovipositors are just for depositing eggs – they do play an enormous, and largely hidden, role in our ecosystems by keeping the populations of other insects in check.

I currently have some of the larvae tucked away in a Mason jar with a damp paper towel in the hope that they will metamorphose into adults and give us more clues as to their identity.

In the meantime, I found another curious pattern in the lines of my winter woods.

On several snowshoe hikes recently, I’ve gazed up at the lace of bare branches silhouetted against the sky, and found one tree among them covered in lumps. While these woody balls persist through the summer, they are out of sight and out of mind – hidden by that wash of green.

Like the lumps on goldenrod stems, I figured that these were probably galls. Plant galls are simply abnormal outgrowths triggered by everything from viruses, fungi, bacteria, insects, and mites, to other plants. Which of those parasites could trigger such persistent, woody galls?

The answer, according to a fact sheet from the Wisconsin DNR, is that these galls are caused by a fungus in the gen-us Phomopsis. 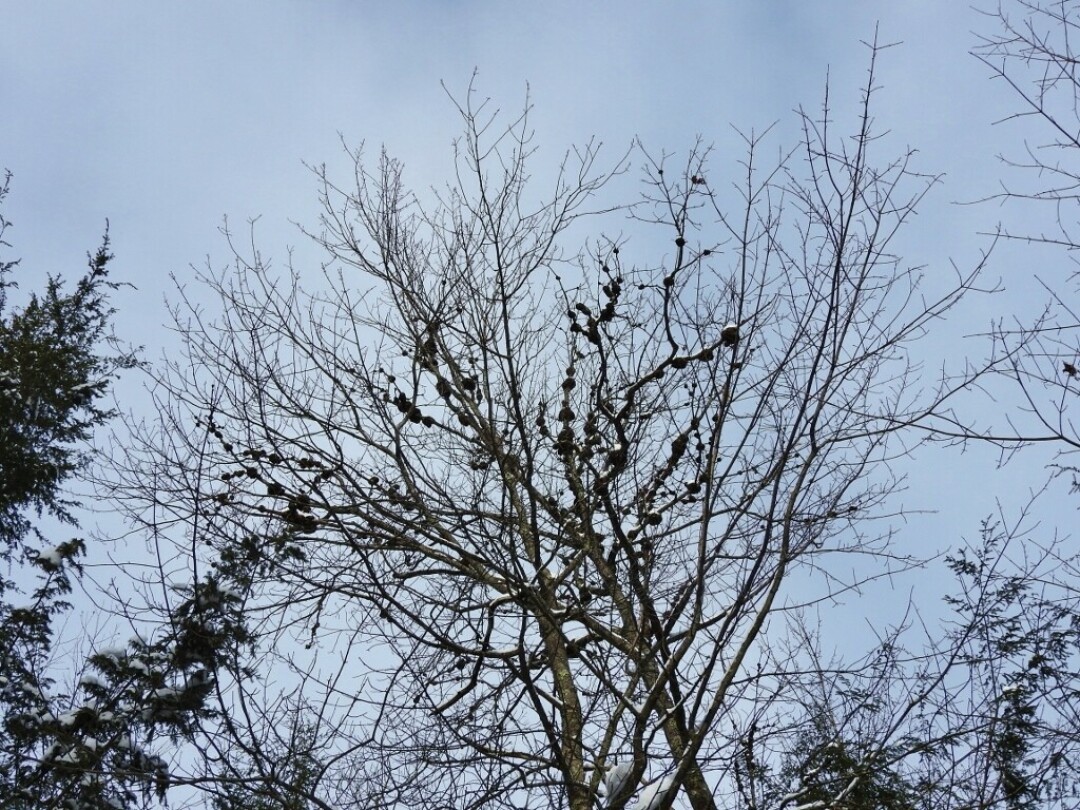 Rounded galls caused by a fungus dot the branches of a northern red oak tree. Although a red maple’s twigs are intertwined, it does not seem to be infected with the fungal parasite.

While little is known about how the fungus spreads, it seems to start on the smallest twigs before moving to larger branches. Often, only a single tree or a small cluster will be impacted. Some twigs or branches may be girdled and die, but the main tree will survive for many years.

There is no treatment available, or even needed, although you can cut off infected branches if you find them unsightly. I find them whimsical!

While I’ve mostly noticed Phomopsis galls on northern red oaks, they also occur on maples, hickories, and other species in Wisconsin.

Around the world, the fungus causes galls on trees in Italy, Poland, Spain, Portugal, Switzerland, England, India, Russia, Tunisia, and more. (This list is gleaned from the titles of scientific journal articles written about the fungus, but could also serve as my post-pandemic travel goals.)

The austere sketch of winter reveals many patterns. We see lines … and lumps where lines should be. We see the patterns of lives interwoven.