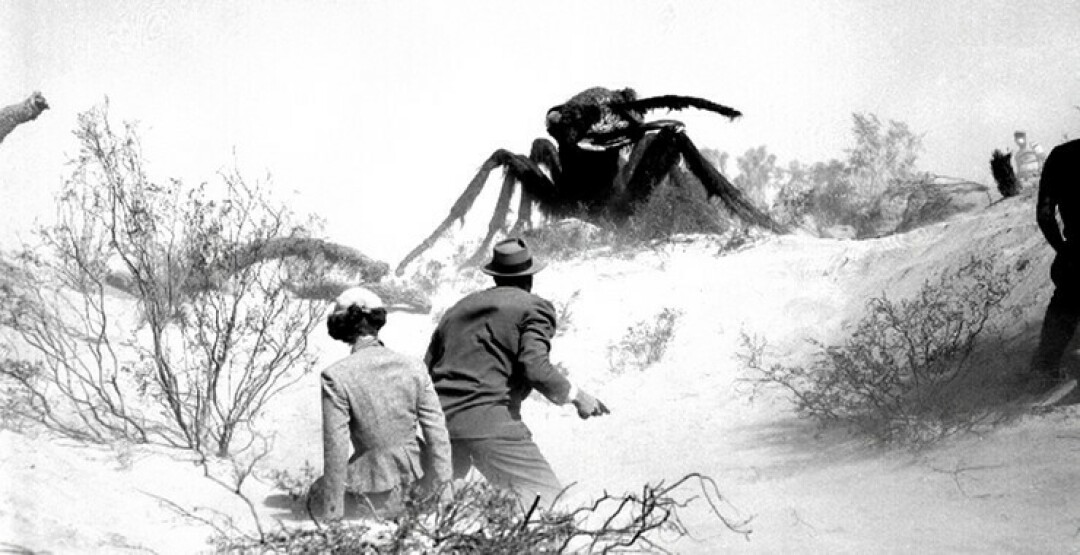 The 1954 Warner Bros. production Them! has the distinction of being he first atomic big bug monster movie. In this case, ants were the radiated monsters.

Late night Fridays of the mid-1960s here in a Duluth were a treat for kids who couldn’t get enough of horror and sci-fi because that’s the night WDIO weatherman Jack McKenna donned the persona of Professor Fantastic, broadcasting Fantastic Theatre from his studio laboratory with shadowy assistant Igor, showing horror and sci-fi movies, mostly from the so-called Atomic Age. It was heady times for pre-teens with a horror/sci-fi jones.

Monsters! Martians! Mad Scientists! Yes, we reveled in these tales from space and from our own Earth after it has been ravaged by atomic radiation or invasion from outer space.

Using interviews with actors, directors, special effects experts and connoisseurs of the genre, Triple M takes us from 1947 when flying saucers were “discovered” by pilot Kenneth Arnold and the Roswell incident, to just a few years later when flying saucers and their occupants started, for the first time, appearing in movies such as The Thing from Another Planet and The Day the World Stood Still, two truly classic, high-end representatives of the genre.

The premise of the documentary is that fantastic films of that period were a by-product of the anxiety and paranoia people were feeling after being suddenly thrust into the Atomic age and Cold War shenanigans with the USSR, a time of duck & cover, terrifying air raid sirens, bomb shelters, the Red Scare, the House Committee on Un-American Activity, McCarthyism and incessant suspicion of spies.

Or as actor Jimmy Hunt says in the documentary, “We kind of saved the world in World War II. Now can we save the world from the atomic age?”

As a boy, Hunt starred in the 1953 classic Invaders from Mars by William Cameron Menzies – again, one of the better of the genre, not least because Menzies also served as production designer (he won an Academy Award for his production design of the 1939 Gone With the Wind).

“It was a time of innocence but there was very scary stuff going on, so to release that fear in an innocent way was a really cathartic in the late ‘50s-early ‘60s,” said Terry Castle, daughter of horror movie marketing impressario William Castle (The Tingler, The House on Haunted Hill, 13 Ghosts).

“We needed relief from all that,” one of the actors in Triple M says. 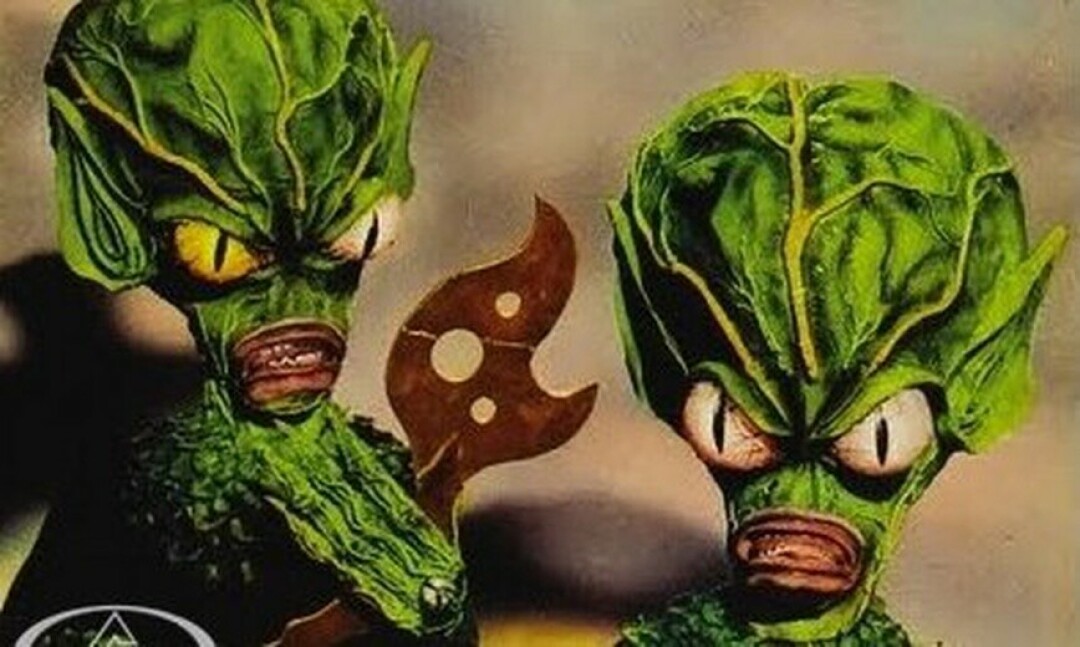 Released as a double feature with another AIP teen flick (I Was a Teenage Werewolf, starring Michael Landon), Invasion of the Saucermen (1957) featured aliens designed by Paul Blaisdell, who plays a prominent role in the Triple M documentary as a monster maker who did not get the recognition he deserved.

From the early saucer and invasion scenarios, the movies entered a new period of freaks of nature created by atomic radiation – beginning in 1954 with Them! (giant ants), Tarantula (1955), The Amazing Colossal Man, The Incredible Shrinking Man and The Deadly Mantis (all 1957), Attack of the 50-Foot Woman (1958), The Giant Gila Monster (1959).

We learn more about some of the directors of these films, either from people who worked with them or from their children, as in the case of William Castle (daughter Terry) and legendary poverty row director Edgar Ulmer (The Man from Planet X), who is represented by his daughter Arianne.
Two actors from the 1954 underwater 3-D thriller Creature from the Black Lagoon – Julie Adams and Ricou Browning (the man in the Creature suit) – praise director Jack Arnold.

Universal contract player Adams did not want to play the beautiful heroine who is stalked by the Creature but had no choice – it was take the job or be suspended – so she decided to have fun with her colleagues in making it, and in so doing became one of the iconic heroines of the monster genre. Arnold was easy to work with she said.

It appears the interview with Adams was done in 1993. She mentions that if anyone had told her during the making of Creature that people would still be talking about it in 1993, well, that would have constituted science fiction for her.

Julie Adams reacts to Ben Chapman as the Creature in the 1954 3-D classic The Creature from the Black Lagoon (Chapman played the Creature on land while Ricou Browning did the underwater swimming segments. The Creature earned a spot in the pantheon of Universal monsters such as Frankenstein and the Wolfman, and it spawned two sequels – Revenge of the Creature, also #-D in 1955, and The Creature Walks Among Us in 1956.

We also get some great insight into actor Vincent Price from his daughter Victoria. She points out that her father’s film career began in the 1930s, when a host of other stars were household names. She goes on to say that when her dad’s career got a new kick start in the horror genre with his role in the 1953 3-D movie House of Wax,Victoria says he was interested in the technological aspects of his industry and wanted to be in a 3-D picture if it was to be the future (it wasn’t, but everyone here agrees that House of Wax was superior to most other 3-D films of the time, perhaps, Victoria said her dad used to say, because director Andre de Toth was missing an eye, so had limited depth perception and would forget about using the 3-D effects until someone might mention, maybe we should bounce a ball at the audience.

We also get a look at the two men behind American International Pictures – AIP – which in the late 1950s and through the ‘60s dominated the teen market with low-budget movies about delinquency, drag racing, outrageous teen monsters, teen space invaders and, later, biker gangs and drug themes. James Nicholson was the creative side. We learn he came up with the titles (such as I Was a Teenage Frankenstein), and then a script would be created around the title, or as his partner said, Samuel Z. Arkoff, the businessman of the pair, Nicholson would come up with a million dollar title for a hundred thousand dollar movie.

All of these details should be fascinating to anyone interested in the strange and wonderful films that grew out of the 1950s. The documentary is divided into three progressive parts, moving upward through the years – 1: The Atomic Age; 2: A World Gone Mad; 3. Fade to Red. The first two segments may be self-explanatory, but Fade to Red refers to the eventual takeover of horror themes in the 1960s by Hammer and others with an emphasis on blood and gore rather than nuclear paranoia.

Many of the movies are worth revisiting on their own, but some of the lower budget stuff (for example the 1959 The Killer Shrews, featuring dogs dressed in bad carpeting) might be best viewed with the comedic riffing of the Satellite of Love crew of Mystery Science Theater 3000 or Rifftrax.