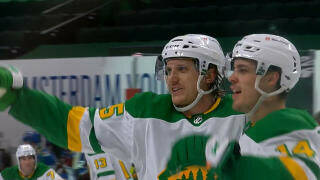 SAWBILL LAKE – With the NHL now at the three-week mark of the season, what have we learned about the league? What have we found out about our Minnesota WILD?

For the league, without the aid of the protective bubble they had control over during the Stanley Cup playoff last fall, there are players, and thus, teams that are going over the acceptable threshold of positive Covid-19 tests, forcing multiple post-ponements of games.

The Vegas club had one game last week without its entire coaching staff after a slew of positive tests put them into quarantine and testing protocol to regain the ability to be back with their team. The VGK has been shut down since. It is hard to tell how that will impact the schedule toward the end of the season when games must be made up to determine playoff participants.

If I thought the NHL did a masterful job with their planning and precaution last fall, there is much less under their control in the current environment. With stringent rules and multiple players on several teams still receiving positive test results, can the public be careful enough and avoid getting exposed? That’s how dicey the entire situation seems.

What do we see on the ice? If I were to look at the overall league standings this morning, WAS is on top. I didn’t expect to see that this year. TOR, PHI, STL, and COL round out the top five. No surprise with that.
In the six to 10 spots are MON, BOS, MIN, VAN, and FLA. Was I expecting to see these clubs here? Well, no. They are all a surprise to me except FLA.

Last season after signing all-world goaltender Sergei Bobrovsky as a UFA, I expected the Panthers to have a much better year than they did, but the “Bob” struggled mightily with his new club. And they haven’t met any top teams yet.

The truth is that the Habs made big roster takeaways then add-ons. Some analysts were expecting them to be much better, and they have been. BOS lost two of its defensive core, VAN lost its number one netminder in free agency, along with a solid D-man, and I looked for the WILD to be in the lower half of the league after many roster changes and other uncertainties.

If you enjoy data-based analysis, go to the Sagarin NHL Rating page. For comparison’s sake, they have two columns that interest me through the season. One is a team’s record versus the top ten teams, and the other is against the top sixteen. That would generally give me a read on where a club is at competitively.

If a team consistently beats teams in those two columns, they should prove to be one of the stronger teams. That theory doesn’t always hold, though. I’ve seen a handful of cases where a team got up for games against the league’s better teams. And then they played poorly against teams they should be running off of the ice. That’s a headscratcher.

In browsing through it today, it is hard to get a good read on the young season. The standings are still jumbled.

The overall league standing will look much different in six or seven weeks than it does this morning. And we might be observing some separation in the standings by then. You will also note that many of the league’s current “best” haven’t played many tilts against others in that category. CAR is 3-0 against the top 10 & 16 teams. Based on the all-divisional play format, that could have been three wins against the same team that they own the matchup with.

Before the weekend back to back home split with COL, the WILD had yet to face a top sixteen team. That’s why I was suggesting caution in going overboard with where the Wild were at as a team. Saturday night, they were hardly in the game from the start.

Last night veteran goalie Cam Talbot returned from injury and helped spark the club to a win over the Avs. Of note is that both teams took a bit of a beating in the Saturday tilt. It seemed to show on the Avs more. Av superstar Nathan McKinnon only played in about half of the game. Former UMD goalie Hunter Miska appeared in his 2nd NHL game, first with the Av’s. COL had a dominating 5-1 win in G1 and a 4-3 loss in G2.

Who are my top five in the league as of today?

COL, MON, TOR, PHI, and BOS. Coming up, COL versus STL could be the series of the weekend!

THE MINNESOTA WILD has had some surprises but has mostly been as predictable as usual. Opening out west and doing some winning was great. Then they have had about three tilts so far where they didn’t show up.

We have seen this before this season. One wonders that it’s too early in the campaign to see any fatigue.
On the other hand, one individual game can be such a physical drainer that it is quite hard to stay at that level game after game.

The first loss of the year was against a hot John Gibson in goal for ANH. The second was a bit of an even matchup against the SJS. The WILD was still in line for the win until very late in the game Brent Burns got possession of the puck and then walked through the entire WilD team on the ice for a highlight-reel score.

Their “road hangover” seemed to finally take effect two nights later as the team looked somewhat lethargic against the LAK in a 2-1 loss. And then Saturday night’s debacle against the Avs.
The club is developing a tendency to take penalties and give up goals late in periods. Those are usually victory killers. In goal, the team has performed better with veteran Cam Talbot playing. He is 3-1 with a 2.49GAA and a .916 SV%.

The young Kaapo Kahkonen is at 3-3 with a 2.86GAA and a .903 SV%. Kahkonen appears to be displaying a mid and high glove side weakness, along with an under-over the glove side shoulder weakness. We’ve seen this movie before in the previous five seasons. Certainly, Kahkonen is still building on his experience at this level having only eleven games played in the NHL.

But that is one part of his game he will have to shed to move his win totals upward. He has played well at times, but you can’t have total confidence at every moment when he is between the pipes. I still see a strong future if the team will have patience and get him into some games. He is going to have to play more to get good.

The early returns on the WILD say that this team will have to get to the point where they have played more games against the top divisional clubs to see where they are. It was nice to beat the Avs last night, but ... PEACE