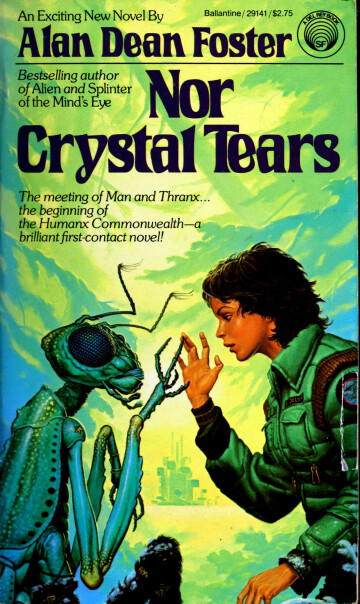 Alan Dean Foster specializes in describing alien species and their culture. This book, while not one of his best, introduces the Thranx, who will be part of the universe in which most of his subsequent characters live. This is the first contact story between humans and Thranx. It is overly optimistic in my opinion, because these humans don’t act like any I know, but it is set in the far future, so I suppose I can give them the benefit of the doubt.

Foster imagines that sentient aliens will be influenced by characteristics of their evolutionary path. Thranx are colony insects who have evolved past the queen-centered stage to have male-female pairs. The larvae are kept in Nurseries, where they are taught by Nurse/Teachers until they are ready to metamorphose. After they spin their cocoons, they sleep for about half a year before they emerge. The adults resemble Earth’s locusts, They walk more or less upright, with the hind legs always feet, their middle limbs can be used as hands or feet, and their front limbs are hands.

As in many insects, the females tend to be slightly larger than the males. They are between 4 and 5 feet tall. I’m sure I have read that animals with exoskeletons can’t grow that large, but then again, I remember when scientists said that according to their calculations, bumblebees can’t possibly fly.

They are very family and hive oriented individuals who depend on co-operative relationships. Some mostly elderly males are philosopher-poets called Eints, and they are highly respected members of their society.

They also have a military, members of which are more aggressive than the normal citizen, which would be expected.

Their home planet is Hivehom, a planet whose polar regions are cold enough to have snow at least part of the year; while the majority of the planet is humid tropical. A second planet, Willow-wane, is more tropical but not as densely populated.

In this story, a military Thranx spaceship encounters a human exploration vehicle which has been attacked by the AAnn, a reptilian race who believe they are destined to rule the universe. The Thranx proceed to board the crippled spaceship, and encounter a human — we are left to wonder about the outcome.

This is not a logical scenario. The AAnn are ruthless predators, and they would never attack a ship and leave it. If the Thranx can board it, then so would they, undoubtedly at the cost of some lives and taking the rest prisoner. However, it suits Foster’s plan to unite humans and Thranx in the Humanx Confederation, which will be a part of many subsequent novels.

The story begins by following one Thranx named Ryo from his time as a larva, and then through his metamorphoses. The pilot of the military spaceship tells a relative of their encounter, and is then forced to retract that information by his military superiors. He more or less disappears from the story at this point. Ryo, now an agronomist on Willow-wane, hears about it, and decides he has to investigate. And here the story devolves into a series of unbelievable coincidences..

It may seem unreasonable to expect logical consistency in a work of fantasy science fiction, but it seems to me that the plot could have come to its inevitable conclusion without so much reliance on happenstance. This is lazy writing. I give Foster credit for inventing the Thranx and describing their cultural characteristics. The only reason I can see for using Ryo as the protagonist is to show the development of the larval stage. There must have been another way to do that.

Ryo leaves his home and travels to the big city, where he would have starved, but he HAPPENS to meet a wealthy Eint who listens to his story about the aliens and takes him under his wing. He brings Ryo to Hivehom, where they focus on the far North military outpost, expecting that to be the place where aliens would be kept.

They travel to the outpost, where Ryo HAPPENS to be where two aliens overpower their guards, take their rifles, and run into the Northern forest, taking Ryo with them. (No clue what humans would expect to accomplish on an alien world.) They manage to escape detection for a month or more, in which time Ryo manages to establish communication. Astonishingly, no one at the military base had attempted to do that!

Ryo talks them into surrendering, and tries to convince the military leaders that they are friendly, but the leaders are afraid to reveal the presence of their homeward to the humans. Ryo then betrays his people by leading the humans back to their ship, which just HAPPENS to be unguarded and ready to go.

They get to Earth’s base on Alpha Centauri, where Earth scientists get as much information as they can from Ryo before deciding they need to dissect him. (Would Earth scientists dissect a sentient alien?) The exploration crew on learning of these plans, decide they have to get Ryo back to his home.
Thranx resemble locusts, and the humans don’t think they will be welcomed as friends by most people, so Ryo comes up with a plan to introduce human children to Thranx larva. That works in the book. I doubt that human children are quite THAT accepting.

So the book is flawed, and the plot is contrived, but I still recommend it for its description of an alien species that makes sense. Foster is generally a better writer than this, and many of his stories are in the Humanx universe, so this book is a good grounding for that. Several later books will describe other alien civilizations. some successful, and some not.

Another of Foster’s successes in describing alien life is the AAnn.The AAnn are only seen briefly as raiders in this book, so we don’t hear them talk. They are expanded on in later books, where we will learn some of their mannerisms and customs. They are evolved from reptiles, and they still have tails and claws, which are unlikely to be retained in evolved species in my view, but of course, my view doesn’t count here.

In most of the later books, we only see the AAnn military, so the aggressiveness is a given. Being military, they are very status conscious. Subordinates acknowledge higher ranks by exposing their necks, symbolically offering their lives. Later, we will meet AAnn civilians and scientists, who are much more sympathetic characters, and in some cases, even likable.

Their home planet is hot and dry and more like a desert. The Thranx live totally underground, but the AAnn homes are mostly below the surface, with only a small part above ground.