Homerun pursuit exposed some of us 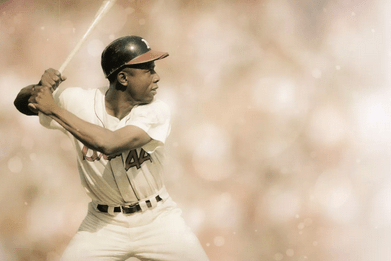 NINE MILE LAKE – It was almost 50 years back now, but I recall it as if it were yesterday. The pursuit, the eventual capture, the euphoria (for some), and the full hate and ugliness of some that dare call themselves sports fans came back to me right away.

Last Thursday, we were informed that American baseball legend and icon Henry Aaron had died in his sleep at 86 at his Atlanta area residence. As I walked down memory lane concerning “Hammerin’ Hank,” I had to take in the whole story. In particular, the summer when he dared to break a long-held and somewhat sacred MLB record, at least to some of the Caucasian fan base, that of the game’s all-time homerun record.

As within the past four years, we have been painfully reminded of how many racial haters live among us, that summer exposed a raw nerve here as well. What Aaron dealt with that summer was as ugly as what we have witnessed in our recent, sordid past.

But the basic precipice of that season was that of an African-American ballplayer chasing a record held by a white guy. Sure, this wasn’t just any “white guy” but the globally renowned Babe Ruth; neither was it only any baseball record. The homerun record has long been revered as a standard of the game. And there were many white fans of the game that were quite upset by the notion of this.

Before the 1974 season, there was a bit of chatter relative to the fact that Aaron would likely surpass Ruth’s all-time mark of 714 career homeruns and that it would occur early in the new season (he ended the prior year at 713).

And of course, as that played out, the national baseball media was focusing on it, as they should, and the amount of contention and hate that came forth was not merely sickening, to say the least, it invoked within me, a young 19-year-old guy, a moment of a terrible reckoning of sorts. And that was that this country of mine was in possession of a specific part of its populace that hated another simply because of skin color.

I mean, I was already quite aware of this. But the extent of the vile hate hurled toward Aaron was a bit of a new low for me. There were even sports journalists receiving death threats for merely covering the homerun chase. Can you imagine the depravity of a person that low? They were referred to as “nigger lovers” and told that if there were one more article about Aaron, they would “die.” And of course, being the forebearers of today’s computerized “keyboard warriors,” the letters went unsigned. The courage to sign on to the written words was in absentia. What else would I expect?

Aaron himself was under the protection of law enforcement for much of this time. And all of this over a sports record from a GAME. Oddly enough, Ruth himself never played for the Milwaukee-Atlanta team and hailed from Baltimore!

Hate apparently exceeds the want to cheer for one of your own ball club. But such are things in this country in general and in the deep south in particular.

My big-sports moment viewing was usually done with my father, and this occasion would be no different. Seated in the living room, right after dinner, we got the game on and settled in to see if it might happen on this night. We wouldn’t have to wait. In Aaron’s first at-bat and on the second pitch, he sent one into the stands, and my pops and I just got to view another bit of American sports history.

Aaron’s homerun trot was captured for the world to see, evoking joy for many and contempt from perhaps a like number. It defeated my inner spirit to think that a person couldn’t cheer for or acknowledge this accomplishment because a person of color achieved it. That just never registered with me. Even then.

I stood up with my fist clenched in deference to Aaron; the new King had finally been crowned! I looked over at my dad to catch a smile on his face. If you loved baseball, as we did, this WAS a big deal. And it would have been that way for us no matter who had broken the record.

Hank was near the end of his storied career at that point. He would go on to play a couple of more seasons and call it a day. But within those two years, he added another 40 dingers to his HR total to end up with 755. Some steroid (PED’s) addled clown named Barry Bonds is supposedly the new holder of the record at 762, but I refuse to recognize that. Do with that what you may. Hank never used performance enhancers. He’s the real HR king as far as I’m concerned. Ruth would remain the next closest with his 714 total.

I’ve been amazed throughout my life at how many black American men, who dared to accomplish something in life, have been hated by all too many white Americans: Dr. Martin Luther King Jr., Muhammed Ali, Aaron, Dr. Harry Edwards, and so many more. Apparently, the haters never even paused to understand the sheer courage it took to BE these men and embrace the causes they did because it took way more than they could ever comprehend or indeed ever possess themselves: their own insufferable self-loathing and personal weakness weighing down their ability to reason. To have a black American possess this record was more than their weak minds could grasp. And weakness it is, because hate is not inherited, it is taught. And that means you’ve allowed another to control your thoughts and psyche—shame on you.

As I studied the articles available from that time, one of the threats leveled at Aaron stood out to me; it was that sickening. It said, “My gun is watching your every black move.” Then I consider our very recent (un) American past. We haven’t changed a bit. We’ve learned nothing. We still hate for reasons unsupported by reason. Our hate renders our Constitution a cruel joke with it’s “ All men are created equal” monotony.

That could be the biggest lie in world history. At least in this country. Aaron endured all of this with an unequaled dignity and class. There would be post-career interviews where he would speak of some of his feelings about what he took. But they rarely, if ever, contained a hint of hate or malice from him. Aaron was a bigger person than that, and thus, more significant than any of his haters could ever dream of being. I want to think that for those of them who might possess a molecule or two of gray matter, that this grated upon them even more. That it exposed them for the fools they are. Then I think, no, they probably aren’t intelligent enough to even realize that. Aaron dedicated his post-baseball life to the pursuits of justice and equality. What about his haters? PEACE