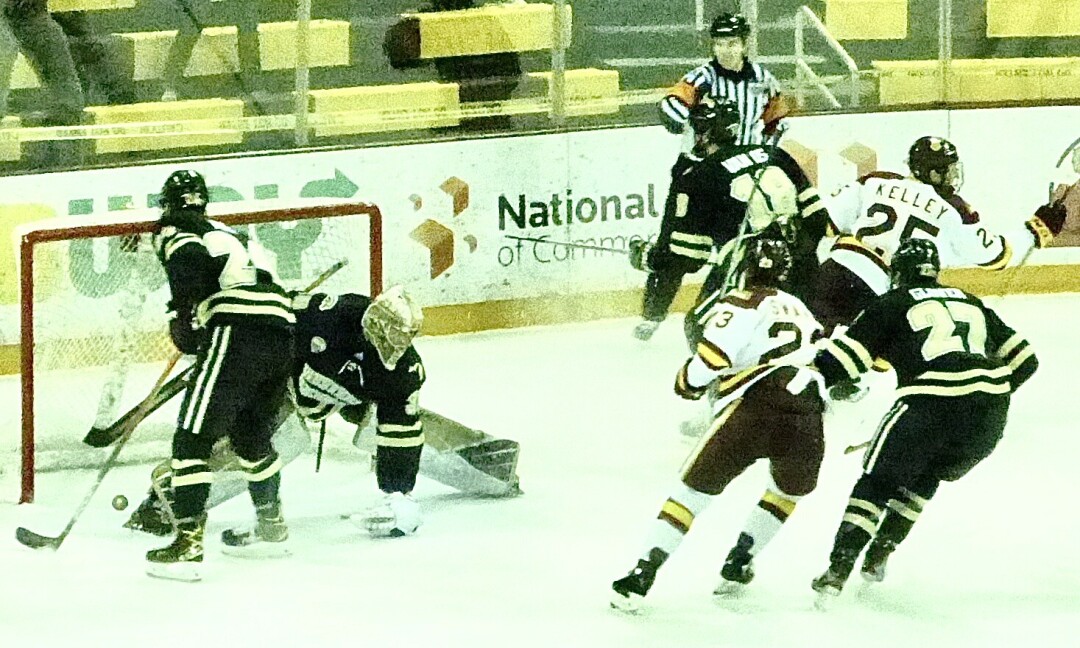 Connor Kelley peeled off to the right after scoring his first college goal in UMD’s second game 4-1 victory.

It would be easy to temper the enthusiasm of UMD hockey fans by saying last weekend’s 5-1, 4-1 sweep over Western Michigan “was only Western Michigan.” But that would be an insult to both teams, and to the NCHC in general.

Western Michigan had come into the series at AMSOIL Arena on a 3-0-1 tear, having beaten Miami 4-1 and tied Miami 3-3, while UMD was getting swept at home by St. Cloud State, and then stunned first-place St. Cloud State 6-2 and 3-1. Impressive.

UMD, on the other hand, was struggling to score after a strong start in the Omaha Pod, losing 4-1 to Colorado College and tying Omaha 2-2 before losing 2-1 to North Dakota. The Bulldogs went to St. Cloud and beat the huskies 4-3 in overtime before falling 3-1 in the second game, and then coming home to drop those 3-1, 4-3 games to St. Cloud State. That stretch measured a shaky 1-5-1 stretch that threatened to drop UMD out of contention.

The most impressive thing about UMD’s sweep was the return to full balance offensively, the kind of balance the Bulldogs used to win the last two NCAA championships. In Saturday’s game, Noah Cates got a goal for the first line, Cole Koepke got one for the second line, and Ben Almquist scored his first college goal for the fourth line, while freshman defenseman Connor Kelley scored on an impressive rush for a goal for the defense. The only line that didn’t score was the third line, and, that line scored four of the five goals in the first game, thanks to Jackson Cates’s pure hat trick and one by Kobe Roth.

With a series at Miami postponed by the pandemic, the Bulldogs spent 10 days in quarantine, and only got back on the ice last Wednesday to get ready for Western Michigan, coming in hot. So it was no small feat when the Bulldogs got two goals a minute and a half apart, by Nick Swaney and Kobe Roth, late in the first period for a 2-0 lead, and when Western cut the lead in half at 3:46 of the third period, the Broncos were on the verge of taking over the game. But Jackson Cates came to the rescue to score at 5:48, 11:22, and at 13:46, settling the game 5-1.

The Bulldogs looked clearly anxious to play, f ring off the game’s first seven shots and outshooting the Broncos 36-18 for the game. Jackson Cates recalled scoring a hat trick in junior hockey at Waterloo, but this was his first one at UMD, and it was before an appreciative part of the small allotment of fans allowed into AMSOIL Arena. “It’s the first time in my three years here I’ve played on a line with Kobe Roth and Koby Bender, and we seemed to click right away,” Cates said. “And my parents were able to come, and it was nice to see them.”

In the second game, that balance came through. Zach Stejskal played goal, after Ryan Fanti had won the first game, and after killing an early penalty the Bulldogs seized command when Koepke scored from the slot after a slick pass out from behind the net by Tanner Laderoute at 7:31, then Almquist, centering the fourth line, backhanded in a rebound at 8:38. Two goals in 1:07. Quinn Olson, a sophomore playing better by the game, took a pass from Nick Swaney up the right side and fed to the goal-mouth where Connor Kelley had joined the rush and looked like a career forward as he deked and scored at 17:49.

The Bulldogs gave up a power-play goal to Ty Glover to open the second period, but Noah Cates got his fifth of the season on a UMD power play — and the family’s fourth of the weekend — to counter that one and the third period started 4-1. Senior defenseman Matt Anderson charged end to end on an impressive third-period rush and tumbled to the ice at right pipe. The puck wound up in the net, after Western defenseman Aidan Fulp crashed over goaltender Austin Cain, and for some reason, after a long review, the officials disallowed the goal. Otherwise the Bulldogs would have had matching 5-1 victories.

As it was, two victories thrusts UMD back into contention, heading for Miami. And maybe the best part, along with the total team balance, was the Bulldogs discarded what had seemed to be their habit of dumping in every puck, instead of trying to make plays. “It was a good weekend for our guys,” said Sandelin. “We made some great plays and got some offense off the rush.” 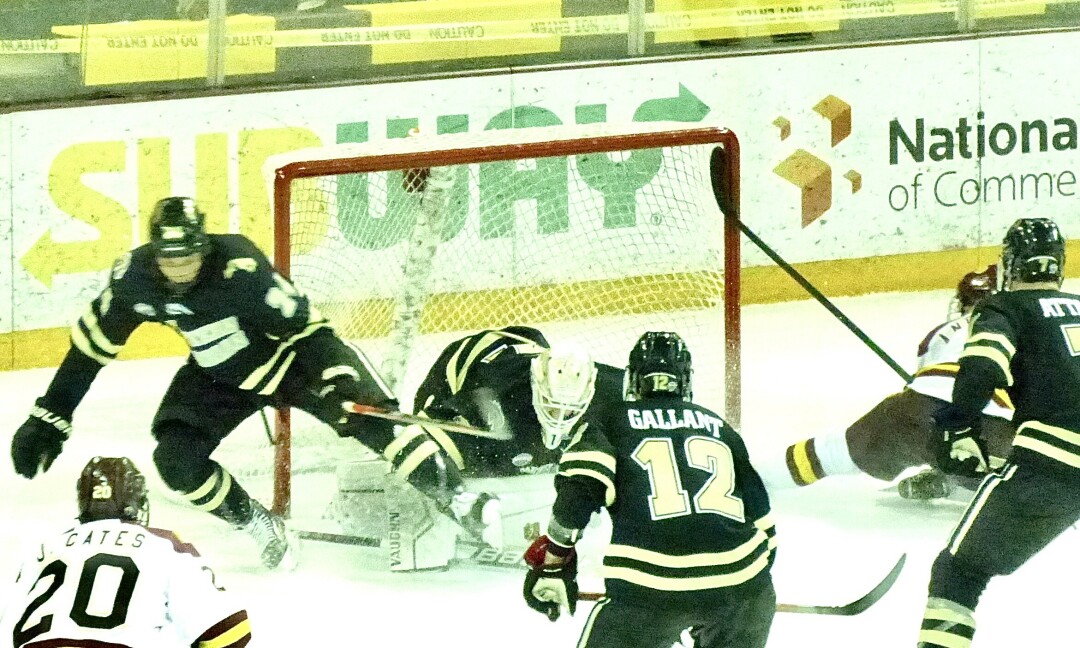 Senior defenseman Matt Anderson can be seen hurtling to the ice to the right of the goal, as Western Michigan relief goalie Austin Cain was crashed into by his own defenseman, Aidan Fulp (24), and officials ruled no-goal because of goaltender interference! Photos by John Gilbert.

The UMD men weren’t the only ones needing to score some goals. The UMD women went through an excruciating weekend at Bemidji, falling 1-0 in overtime in the first game to Bemidji State, then coming back in Game 2 to battle scorelessly through three periods.

Freshman defenseman Nina Jobst-Smith got behind the defense in overtime and star center Gabbie Hughes sent her a long pass with 1:37 remaining in the 5-minute 3-on-3 overtime. Jobst-Smith looked like a veteran scorer as she raced in, made a neat move and scored to give the Bulldogs a bounce-back 1-0 overtime victory. It was her first collegiate goal for the Bulldogs.

The great disparity in the Women’s WCHA continues, as the Bulldogs are striving to get up into the heady atmosphere of Wisconsin, Minnesota and Ohio State, which are currently ranked 1-2-3 in the country, and yet need to put distance between themselves and the three closest pursuers – Bemidji State, St. Cloud State and MSU-Mankato. The split at Bemidji was a setback, and now the Bulldogs have to regroup and make sure St. Cloud State doesn’t disrupt their plans this weekend at AMSOIL Arena.

NOT POURING IT ON

Grand Rapids is an established AA power in Section 7, and Hermantown is the reigning power in 7A, and hearing renewed suggestions the Hawks should move up to AA. This year’s Hawks are loaded, and they have bolstered their balance and strength with the addition of sophomore center Zam Plante, the oldest of former UMD star Derek Plante’s three boys. Zam got his name as a unique twist on the height of comic book descriptive bubbles.

A friend of mine suggested that maybe it come about as a shortened form of Zamboni. I’ve watched him play, as a Bantam last year, and last weekend at Proctor, where he scored with a lightning-quick pull and tuck with a rebound for a 4-0 lead. He has scored something like seven goals, and he is a treat to watch, with his dad’s hockey sense and playmaking ability, and doses of the quick-skill prowess of Huffer Christiansen, Mike Antonovich and Mark Pavelich added in. I’m going to suggest to Derek that Zam’s name should officially be changed to “Zam!” – with the exclamation point.

Hermantown led 4-0 after one at Proctor, and the shots were 29-0. The score was 6-0 after two periods and the shots were 51-0. The final score was 9-0, and the Hawks, rotating four full lines every time around, outshot the Rails 72-2. To Proctor’s credit, the Rails kept battling, and it never looked as though Hermantown was running up the score. They just kept making plays, and the Rails never had the puck long enough to make a play or get a shot.

"TB" for Tampa or Brady?

It was an intriguing match of master quarterbacks, when Tampa Bay went to Green Bay and Tom Brady beat Aaron Rodgers 31-26. Both quarterbacks threw for three touchdowns, but both had their troubles. Brady was intercepted three times, and I wonder when that last happened. Rodgers didn’t throw any interceptions, but he was sacked a half-dozen times. I think the better team won, and when you consider that Rodgers had to beat Drew Brees and New Orleans to get the chance to play at Green Bay, where a Brady-Rodgers match ensued, Brady doesn’t have much left to prove.

Now he gets to try to unseat the rising star of Pat Mahomes when the Buccaneers face defending champion Kansas City in the Super Bowl in another week. It is in Tampa Bay, for good measure. It would seem that souvenir jerseys with an enormous “TB” on the front would be a huge item, and nobody has to say whether it stands for Tampa Bay, or Tom Brady.