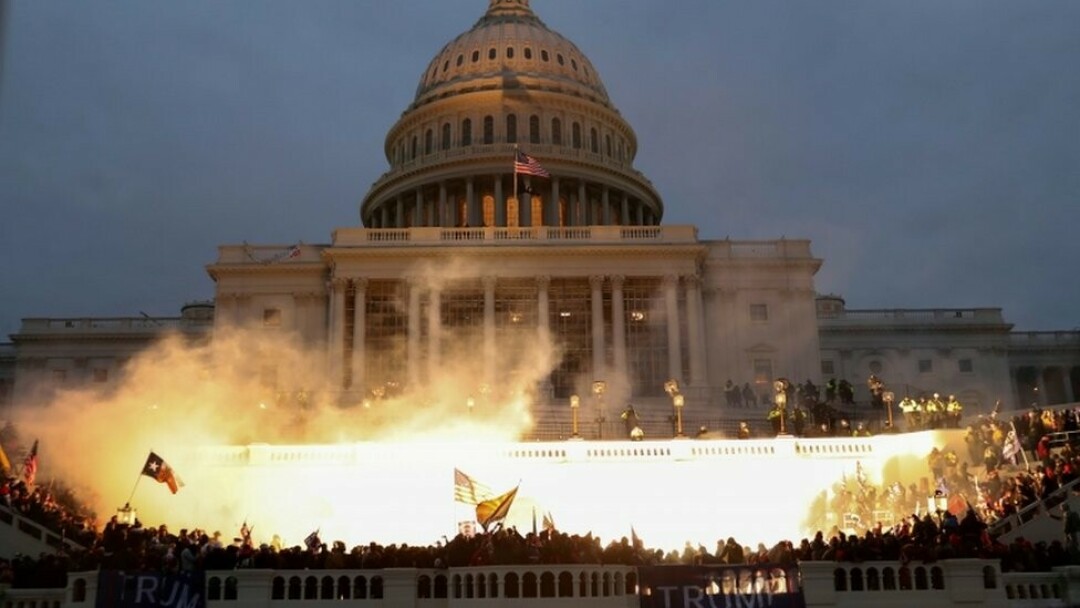 Are We Heading For “Double, Double, Toil And Trouble?”

Shakespeare’s MacBeth is a play about chaos that results when a person in the human chain of being rises above his level of competence.

In our society we call it the Peter Principle. We have just finished four years of chaos with many more on the horizon because we elected a man to the highest office in the land manifestly unqualified to lead anything except a malignant, corrosive cult.

In the play Shakespeare has three witches throw poisonous, toxic and revolting things into a bubbling hot cauldron such as lizard’s leg, eye of newt, swelter’d venom, scale of dragon, hemlock, and finger of birth-strangled babe to forecast that King Macbeth and his lady were going to meet an untimely end because they tried to climb the chain links above their normal station.

So what did “The Chosen One,” the reigning prophet of the evangelical white “Christians,” the holder of five deferments, and the guy who said “I alone can do it,” do to have his stinking hot cauldron overflow on him?

He developed the processes of his “The Big Lie.”

Thousands of high school, college and pro basketball games were played last weekend to an established set of rules enforced by officials. Somewhere out there in this huge land a game clock showed a score of 81-74 when it showed .00. The last bucket had been scored just before. The team with 81 points was declared the winner. No questions.

But Trump said he had won by a landslide because millions of ballots were not counted. The election was rigged, the election officials in certain states were corrupt, and the vote-counting machines had been hacked to switch votes. Trump did not concede and brought 62 cases of voter fraud to the courts.

All were denied, but “The Big Lie” swelled to enormous size among his cult, who then invaded and trashed the capitol under his direction. It was his “The Big Lie” that finally dumped the overflowing cauldron on him in his private personal abyss.

Can a Democracy Overcome Faithless “Christians” and Fake “Patriots?”

Democracy has been frail and sickly for more than 400 years, and the Trump administration denied hospice for four years, hoping to replace it with fascism.

The health of the country is in the critical stage and recovery is debatable.

A recent diagnosis by historians raised doubts about survival because of a recent poll of the human cells which provide oxygen to the body politic. In a recent reliable poll, only three percent of Americans indicated that things are going “very well” in the Divided States of America (DSA) these days.

More than 80% of Republicans cited that the Democratic Party has been taken over by socialists while 78% of Democrats say the Republican Party had been absorbed by racists. Eighty-five percent of Republicans said the Confederate flag was simply a symbol of Southern pride. Republicans (57%!)even said white people face more discrimination than Blacks (52%!). These poetic lines by Leonard Cohen cover some of our major problems:

A Southern Baptist minister announced the morning of Jan. 19 that “The Chosen One” was going to serve four more years as our president because Jesus Christ had come down to earth to tell him the rapturous news. There would be no inauguration of Joe Biden. The Rapture would start soon. All “good” Christians would be transported to Heaven-naked-to begin our lives next to God on the golden streets of Paradise. I’m still here …

So far, The FBI has investigated some members of the Insurrection Party that vandalized the capitol: a covey of Roman Catholic nuns, the son of a prominent New York judge, one of our Olympic swimmers, and a Texas real-estate broker who flew to D.C. in a private plane. The American Psychiatric Association says at least 6% of Americans take turns being bonkers each year. I bet many of them were in D.C. on Jan. 6.

How can we restore them to mental health about government? I have collected quite a number of statements made by members of assault teams invading the capitol. I’m going to list a few. They are going to be a major problem for President Joe Biden’s unification program.

• Guy Reffitt, a 48-year-old Texas oil worker, is a member of the Three Percenters and The Texas Freedom Force, two militias of note. He has been arrested for participation in the riot. He told his wife, son, and daughter: “If you turn me in, you’re a traitor and you know what happens to traitors – traitors get shot.”

• Americus, Ga., attorney William McCall Calhoun. Jr. is facing a number charges, one being kicking in the door of Speaker Nancy Pelosi’s door. His words: “And get this – the first of us who got upstairs kicked in Nancy Pelosi’s office door and pushed down the hall towards her little sanctum, the mob howling with rage. Crazy Nancy probably would have been torn into little pieces but she was nowhere to be seen.” He practices criminal law.

• Thomas Edward Caldwell, a Navy veteran from Virginia, is one of the leaders of the Oath Keepers militia and is charged with leading 30-40 people in the storming of the capitol. He was there to make “citizen’s arrests” of senators and representatives. He told other violators about tunnels, doors, and hallways in the capitol, and was recorded saying: “All members are in the tunnels under capitol. Seal them. Turn on gas. We must smite them now and drive them down. Every single person in there is a traitor. Every single one.”

• Brendan Hunt is a full-time employee of the New York state Office of Court Administration and a part-time actor. He did not go to the capitol riot but he posted instructions to rioters: “KILL YOUR SENATORS!” In a video he said: “We need to go back to the U.S. Capitol. What you need is to take up arms, get to D.C., probably the inauguration, and put some bullets in their f------- heads. If anyone has a gun, give it to me, I’ll go there myself and shoot them and kill them.”

• Jessica Watkins is a U.S. Army veteran and operates a bar named the Jolly Roger in Ohio. She communicated to Thomas Caldwell in D.C.: “We have about 30-40 of us. We are sticking together and sticking to the plan.” In her Ohio home the FBI found many firearms, cellphones, pepper spray, radios, a bag with helmet and respirators, paintball guns, cut-down pool cues, zip and cable ties, camo clothes, and a copy of Making Plastic Explosives From Bleach.

The Big Question Is: How Do We Get These Five To Vote For Democracy?

Seventy-three million Americans voted for a ”I-alone-can-do-it” fascist psychopath in the 2020 election. Among them were many honest people fed up with no increase in income or wages for the last 40 years. But also among them were millions of the American Taliban represented by “Christian” religions that want a theocratic government to keep women pregnant and in the kitchen.

Among them are millions who wanted to make America great again by making America White again.

Among them are million of QAnon conspiracists who believe Democrats are Satanists running child sex rings, drinking the blood of Christian White babies, operating a real “Deep State,” and putting micro-chips in the shoulders of innocent people as they are vaccinated so they can be later controlled by a higher authority.

Some QAnoners said after the riot they were disappointed that everyone at the inauguration was not sent to Guantanamo and executed.

Georgia Trumplicans elected Marjorie Taylor Greene, a QAnon conspiracy supporter, to the House. She claims the mass murders at Sandy Hook and Parkland were not real – but were “faked” by the government of Obama. Among the millions are militia members in 50 states carrying semi-automatic AR-15s and Glocks in a country that now has more than 425 million firearms , enough for one for every man, woman and child in the DSA – with 90 million spares available because of “need.”

Absolute insanity in a country that suffered the OK Corral. Now it seems that every night in the F-M area is shattered by the sounds of gunfire.

Did Democracy Prevail, Survive or Fail Because of Trump’s Capitol Riot?

After the”wilding” riot at the capitol, New York Times veteran columnist Thomas Edsall surveyed a number of American historians on whether America was “ungovernable” because 35-40 million Trumplicans are convinced Biden’s election was illegitimate and rigged – despite a 7 million vote advantage. The pessimists seem to have an edge over the optimists whether democracy will survive.

Harvard sociologist Theda Skocpol tried to sum up the feelings on both sides: “The key dynamic in U.S. politics right now is political civil war dividing the white middle strata between those who want to be part of a multiracial, inclusive future, and those who fear and refuse that. A significant chunk of very right-wing minded people has been present in the U.S.A. for a long, long time. The changes in recent times are in the GOP as a party and in a set of related organizations. Trump’s impact has been to remake many state GOP parties and to embolden organizations and individuals in the minority, yet powerful, far ethno-nationalist right.

Trump picked up the reins from the Tea Party, which was too scattered to unify a far-right movement, but which definitely paved the way for demonizing, no-compromise, quasi-authoritarian politics. Partisan polarization skewed to the right did not start with Trump, but has been sped along and given an anti-democratic, authoritarian focus. This is the overt extremism of the Trumpists.”

Another political scientist, Julie Wronski of the University of Mississippi, has a more pessimistic view: “When Americans are divided on simple facts, and live in two different realities, we are not a governable people. To put it another way, when two people are playing a game cannot agree on the basic rules and layout of the game, they cannot play. When groups within American society believe in two different sets of rules on how to play the game of democracy, it cannot be played and we become ungovernable.”

I think she is right.