Bedlam in the White House 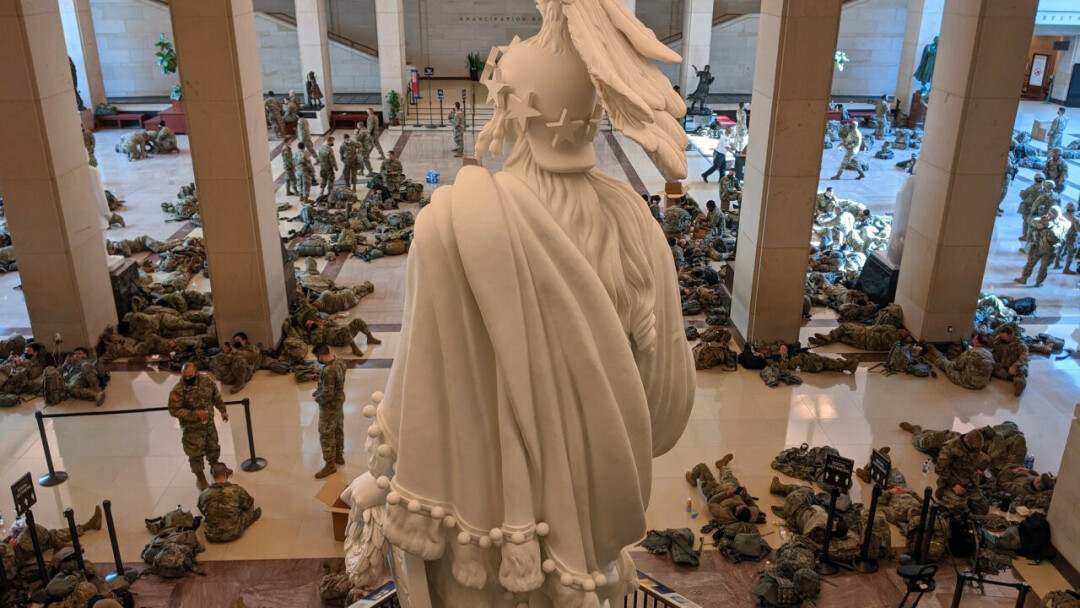 In a December column I wrote the following: “We are in the middle of dangerous times. We are on a knife’s edge of losing “it.”

“It” stands for country.”

On Jan. 13, the day the House impeached Donald J. Trump, I saw 2,000 National Guard troops trying to sleep on the well-lit marble floors of our Capitol near their rifles and equipment, taking a break from guarding it from Trumplican voters. I was not surprised.

Some members of both political parties say the incidents leading up to Jan. 6 “isn’t who we are.” The hell it isn’t. Read our history. It identifies us to a “T.”

We have been real people in a real country for more than 400 years since we started to slaughter Indians and enslave Negroes.

Newly-elected Black Representative Cori Bush put it this way: “Many have said what transpired on Wednesday was not America. They are wrong. This is the America that Black people know.”

We still don’t have “a shining city on a hill.” We don’t even have one in a swamp yet because every city has the poor and homeless roaming the streets.

In the White House we have living quarters where we are running out of white-coated attendants trying to control the resident nut from popping his psychopathic cork.

It reminds one of England’s St. Mary’s Hospital that was renamed “Bedlam” when Londoners paid admission to see the crazies act up and perform for part of its 700-year history.

So, where are we at the moment? There’s the old story of a hated Hollywood actor who died and 10,000 showed up for his funeral. An observer said to another: “I can’t believe this guy had 10,000 friends.” The other’s response: “Those aren’t friends. These are people who showed up to make sure he’s dead.”

What happens if King Donald “The Chosen One” dies? Would 5,000 friends attend the funeral to show remorse while 5,000 attend to make sure he’s dead?

What are the odds?

The Internet: A swimming pool and toxic, pus-filled cesspool

I have been a reader and a writer for 83 years of my life. At Little Falls High School, where I played football and baseball, I was sports editor for the school newspaper, The Comet’s Tale.

At Moorhead State Teacher’s College, where I was co-captain of the football team and a pitcher on the baseball team, I was sports editor of the college newspaper, The MISTIC. After earning a BA in English Literature and three years of active duty as a Marine officer, I taught senior English, journalism, and creative writing for eight years at Fargo Central High School. I was adviser for the school Newspaper, The Cynosure. I then moved into administration as Personnel Director where I wrote the first Fargo Public Schools Policy Manual for the Fargo Board of Education in the late 1960s. I then served in several capacities: principal of South High School, principal of Horace Mann Elementary, Administrator of Employee Relations and Chief Negotiator for the Board of Education, and principal of North High School, for a total of 36 years.

I also have taught doctoral-level administration courses at NDSU and Moorhead State, and after retirement taught a year at Concordia’s education department.

During that 36 years I wrote articles for education journals at the state and national levels. Then I started to write weekly columns for the Midweek Eagle and later the High Plains Reader.

I have been writing a weekly column on numerous subjects for 27 years, published in two weekly newspapers. That means about 1,350 columns, 2.5 million words, equal to 40 average published books.

To be as accurate as possible in my research, I read The New York Times, Washington Post, The Guardian, The Minneapolis Tribune, The Forum and the Wall Street Journal every day. I watch MSNBC, CNN, and Fox News daily. I read a lot of history and maintain files on hundreds of subjects. I am a news junkie with a strong addiction.

However, I know better than to trust any of the social media. I do not belong to Facebook, Twitter, Instagram, or any of the try-to-make-a-buck scams because there’s danger wherever greed rules.

The Internet is the greatest educational tool ever created but cannot be trusted to get anything right. It is filled with truth, lies, facts, fraud, spirit, depression, love, obscenity, morality, amorality, immorality, peace-loving, war mongering, religion, cults, left and right extremism – well, you get the idea.

Everything has to be triple-checked. A line from Desiderata says it all: “Exercise caution in your business affairs, for the world is full of trickery.”

Why we had a resurrection of an insurrection

I have been reading national columnists and listening to TV talking-heads since Jan. 6 about the reasons behind the attack on our capitol, but I found the most balanced opinion about the insurrection in a column by small-town editor Art Cullen of the Storm Lake Times of Storm Lake, Iowa. A town of 10,000, its population is 65% white, 30% Latinx, and 5% Black. The main business is a huge Tyson Foods operation that processes pork and turkey products produced by nearby Iowa pig and turkey factory farms.

Cullen has grown up with people like many who took part in the capitol attack. He starts his column with a statement made by a neighbor of his: “The government did this to us.”

1. The search for cheap labor from the 1980’s to staff meat processing plants, to pick fruits and vegetables from Florida to California, and to destroy unions was enthusiastically supported by government. Corpor-ations rented, leased, and bought politicians of both parties at every jurisdictional level to keep South and Latin American workers crossing the border to find jobs. It’s against the law to hire undocumented workers. How many employers have been sent to jail or fined for hiring the undocumented?

2. “Tens of millions of American think they have been cheated by cheap labor, the Wall Street Casino, and huge banks and corporations for 40 years. Many think the banks should have been split up long ago.

3. “Workers and farmers have been spread a steady diet of baloney about welfare queens and immigrant marauders” to keep the working class fighting one another.

4. “The average blue-collar manu-facturing wage around here is $18 an hour, barely enough to get by. Those union jobs in the industrial heartland, that once paid double that, are long lost, south of the border or to China. Ottumwa, Iowa, once a manufacturing hub, is half its size from 50 years ago. Capital flows to the coasts. We get left with hog confinements and the manure that goes with them.”

5. “It breeds a resentment that fosters racism and rage. Jobs in meatpacking pay half what they did when I was in high school in 1975. Immigrants moved in, and the Anglos either bailed out for the big city or stayed behind, nursing a grudge. Some of them got mad enough to grab a gun.”

6. “Desperation makes you crazy. That’s the root of it. That, and White people afraid of losing their many privileges. It took a mad man lke President Trump setting the spark amid a pandemic of disease and frustration. The system in place for the past couple of centuries has again overplayed its hand, pitting ignorant White people against poor Black, brown, and Native people.” (This is a reference to slavery, Jim Crow, Sr. and Jim Crow, Jr. the Ku Klux Klan, Reconstruction, and voter suppression laws shutting out the poor and minorities .)

7. “People from my little Iowa town were out in D.C. to protest. These graybeards in flannels, “Make America Great Again” caps and camo pants? I know and grew up with them. Would most be incited by the president to risk prison by ransacking? I wouldn’t bet on it.” (You may want to read more of his Jan. 9 Washington Post article.)

We need to know why people from 36 states, so far, joined the riot

Cars, busses, trains and planes brought an estimated 50,000 to Washington for the Jan. 6 rebellion. Washington has 17 Hilton hotels and lots of others. It’s said most were filled to capacity by rioters.
Who paid for the transportation, hotel rooms, flags, Trump banners, MAGA caps, posters, Confederate flags, crow bars, pepper sprays and balls, and fireworks?

Here’s a partial list: a Seattle doctor and a Washington state representative, a Seattle college professor, a California surgeon and vaccine critic, a Texas attorney, a Pennsylvania teacher, a Chicago real estate agent, an active-duty Army officer, at least 28 police-so far, a “shaman” of the QAnon conspiracy group wearing the horns of his office, a bearded man wearing an anti-Semitic Auschwitz T-shirt,

I don’t agree. There were a lot of distressed Americans with PTSD from trying to make a living while the rich jetted from one estate to the other.

Trump has been a psychopath all of his life, loving only himself but developing a modus operandi for taking advantage of the weaknesses and strengths of other people. His only religion is himself. He is always a winner, never a loser.

A plea from T.S. Eliot’s “The Love Song of J. Alfred Prufrock” describes what Trump should have been: “I should have been a pair of ragged claws scuttling across the floors of silent seas.”

Who would want Donald Trump as a neighbor? Franklin Graham? He just compared the 10 Republicans who voted to impeach Trump to Judas, who betrayed Jesus Christ in the Bible!

Will religion survive four years of Trump in the DS of A?

I have been a good boy for 82 years, listening to those fascinating sermons in Roman Catholic and Luther-dominated churches, but the evangelical Christians threw me a curve ball I couldn’t hit in 2016. They put abortion, race, guns and homosexuality on Trump’s bargaining table for their votes.

The psychopath made an art of the political deal. That did it.

One of my heroes is W.C. Fields. At 10 years old he rode with his father on a horse-drawn fruit cart in Philly, juggling oranges when they weren’t busy. He was so skilled, at age 18 he juggled for the king and queen of England. Then Hollywood, where he was so successful the movie makers allowed him to put his own salary figures in the contracts.

W.C. loved a good drink, so he filled a thermos with “lemonade” and drank a martini from it whenever there was a break.

I have a martini every afternoon in tribute to W.C. Near his death he was caught reading a Bible by a close friend. The friend said: “Bill, you’re not religious! Why are you reading the Bible?” W.C. muttered: “Just looking for loopholes.”

That’s what I’m doing these days because of today’s “Christians.”