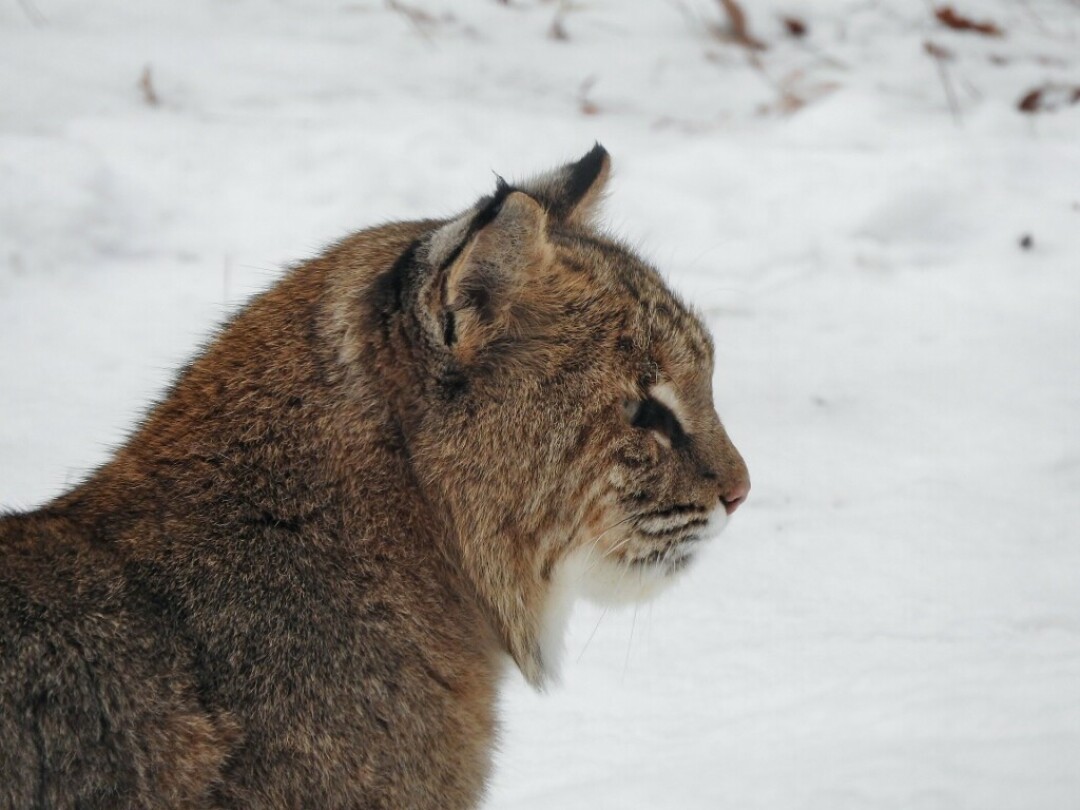 A bobcat stares intently at activity around a birdfeeder. The hunt was unsuccessful. Photos by Emily Stone.

Each time I walk out to check my new trail camera, the moments are filled with anticipation and excitement. Who will I find today?

Lately, though, the critters have become suspicious of my tracks, and of whatever tiny lights and noises emanate from the camera. Good captures have become fewer and farther between.

On the other hand, fresh snow on my driveway and in the woods records the tracks of bobcats, otters and weasels, in addition to the fishers, foxes and coyotes who are also captured on camera. This bit of technology is not a replacement for paying attention. Good old observation skills may still yield the best – or at least the most plentiful – results.

Lois Nestel, the Museum’s founding director and naturalist, lived in a time before we had such technological crutches to help us spy on nature.

In her weekly newspaper column in the 1970s, she wrote eloquently about the many wild events she was able to observe right in her yard, which is now the Wayside Wanderings Natural Play Area in Cable.

I’m pleased to share her words with you again.

“On the night of the last full moon the winds were quiet and the sky clear following heavy snow. Awakening in the night I sat by the window gazing out at a familiar world made strange and new by moonlight and shadow.

“The trees were stark silhouettes against the sky, and their shadows were blue-inked traceries upon the sparkling snow. As I watched, one dark form and then another emerged from the shadows as two cottontails came out to eat the food scattered on the ground for them each evening. 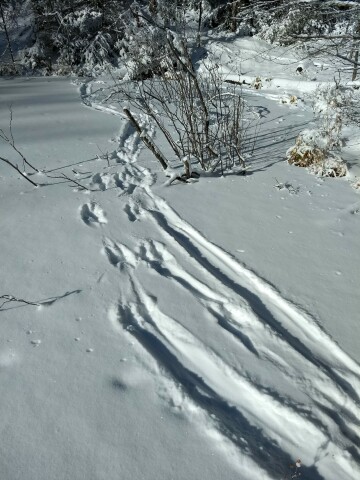 The joyful run-and-slide patterns left by otters are always fun to see.

“They fed quietly for a while before moon madness struck them and they began to leap and play as only rabbits can. From immobility first one and then the other would leap high, twisting and kicking heels into the crystal air. They would chase madly around the trees, in and out of the shadows, stop, facing each other, and then be off again, often with one leaping over the other to begin the race.

“How long this might have con-tinued is hard to say, but suddenly, quite close by, a coyote wailed and immediately the voices of several others rose in chorus. As if they had evaporated the rabbits were gone. Several times the yipping wails of the coyotes rose and fell; then all was silent.

“The woodland dramas of life and death continue, unseen by human eyes, unheard by human ears. The night was full of life; yet filled with moonglow and shadow, there appeared only the serenity of a painting by the greatest of all masters.”

Although it’s rare for us to be awake and looking at just the right time to witness these nightly activities, curious naturalists can piece together the stories by daylight in the snow. Lois later wrote:
“Each day as daylight comes, I find it one of my more pleasant self-imposed duties to check on the outdoor activities of the preceding night.

“A cat has wandered through the yard and across the porch, its small round paw prints unmistakable. Cottontails have hopped contentedly, picking up scraps in the bird feeding areas, only to bound away in sudden fright, their leaping tracks closely followed by those of a dog. Near a woodpile the springing two-by-two tracks of a weasel trace an erratic pattern that becomes more purposeful as it merges with the tiny pattering tracks of a vole and both disappear down a hole in the snow near a clump of tall dead grass. 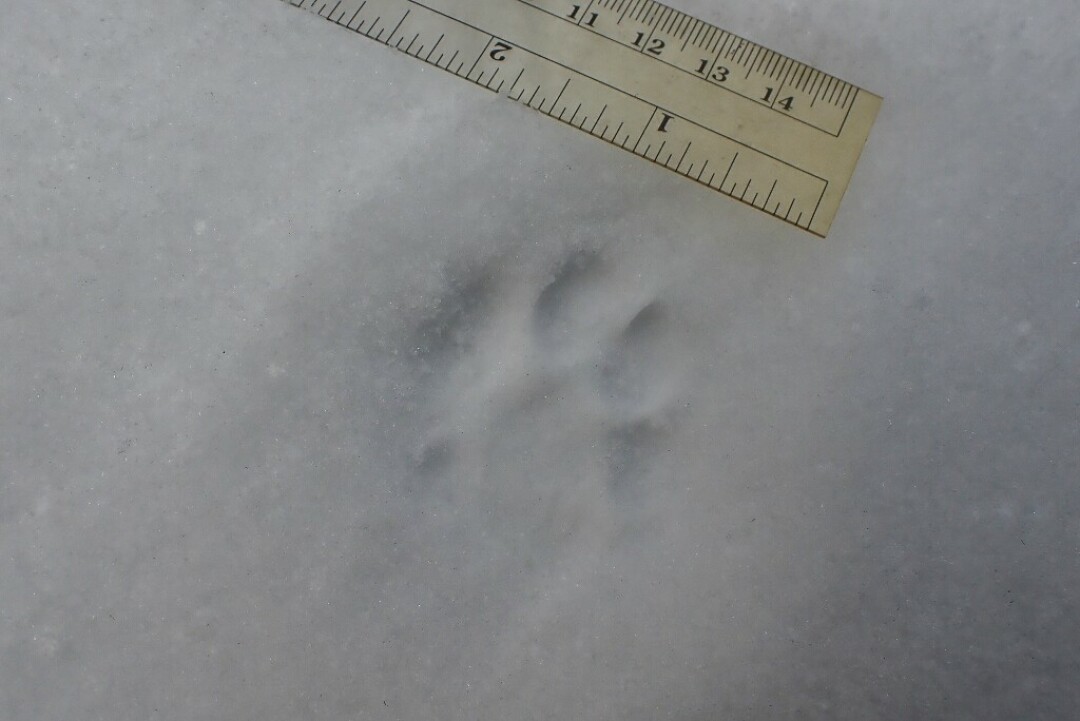 Bobcat tracks have four toes, no claw marks, and an asymmetrical shape.

“Days of soft snow will find areas around the bird feeders stitched in crazy-quilt patterns by the feet of many small birds and perhaps those of a raven or crow who, at some time, strode through to collect a choice morsel.

“These and many other signs may be found along nearly any street or roadway or in one’s own yard. Beyond those more civilized confines are tracks in endless variety. The meandering tracks of deer, of fox or coyote on the prowl for food, the skittering of squirrels from tree to tree, or the shuffling snowshoe tracks of partridge are only a few. A streamside or frozen lake may reveal the tracks of mink or the joyful run-and-slide pattern left by otters.

“The knowledge of tracks is a necessity to the hunter or trapper, but it can be a great source of pleasure to those who enjoy nature for its own sake and like to speculate about the stories tracks can tell.”
Want to learn more about tracking? I’ve written about it many times on my searchable Natural Connections blog (cablemuseumnaturalconnections.blogspot.com). I also recommend the Falcon Guide to Scat and Tracks of the Great Lakes, available with free shipping from our friends at Redbery Books in Cable. Enjoy!

Emily Stone is Naturalist/Education Director at the Cable Natural History Museum Emily’s award-winning second book, Natural Connections: Dreaming of an Elfin Skimmer, is now available to purchase at cablemuseum.org/books. Or order it from our friends at redberybooks.com to receive free shipping! For more than 50 years, the Cable Natural History Museum has served to connect you to the Northwoods. The Museum is closed, but our Mysteries of the Night exhibit is available online. Connect with us on Facebook, Instagram, YouTube, and cablemuseum.org.