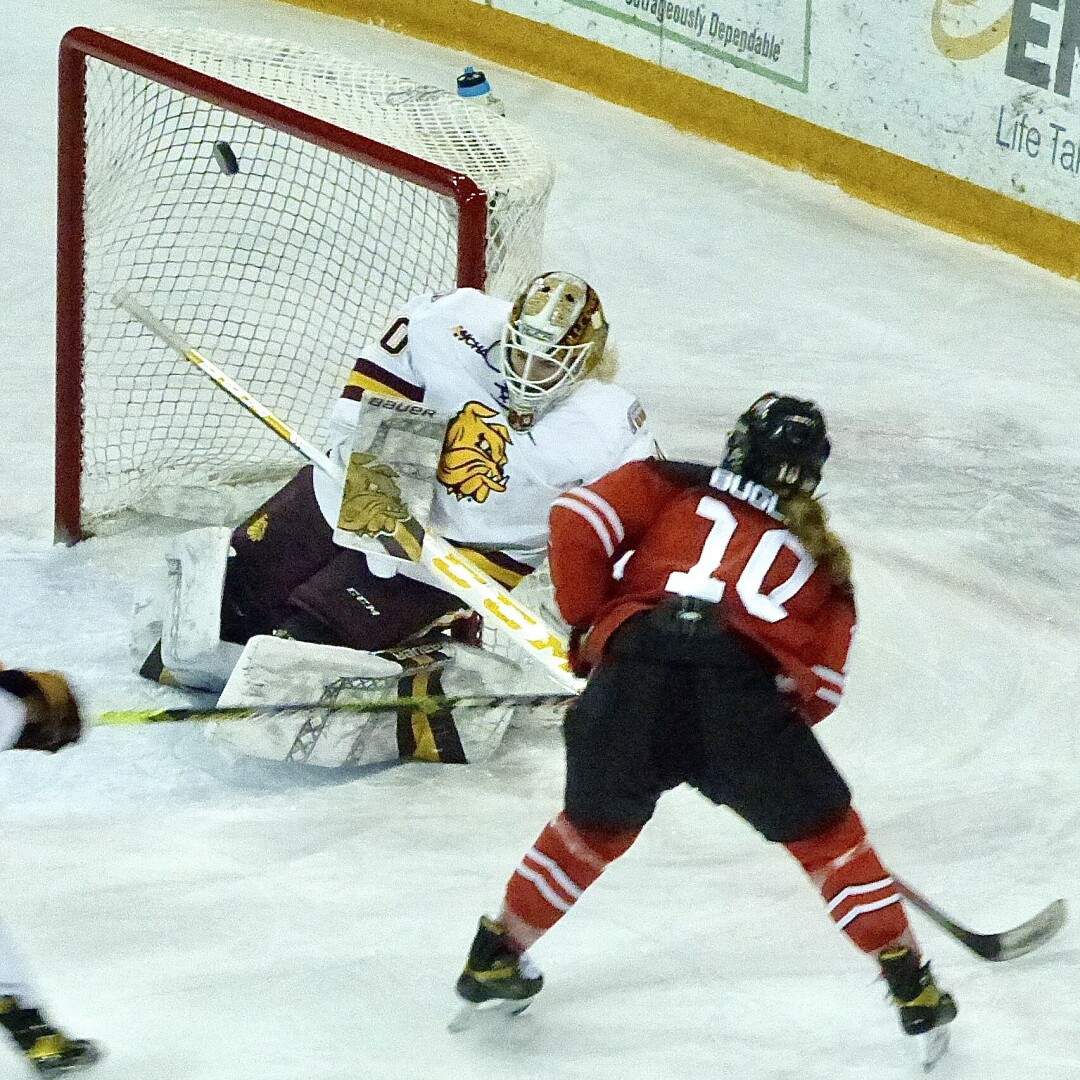 One thing we can all agree on, the COVID-1 pandemic that has restricted us all from virtually everything considered normal has made a major contribution to parity at all levels of hockey.

We can save the Minnesota Wild for last, here, because Russian rookie Kirill Kaprizov appears ready to provide the spark to make them a contender, maybe, and a team that is captivating to watch, for sure.

Let’s go instead to college hockey. When the UMD men’s team was beaten twice in two great defensive gems by St. Cloud State a couple of weeks ago, it knocked the Bulldogs and their fans for a loop, and elevated St. Cloud State to first place in the NCHC. Last weekend, while UMD was slated to go to Miami, St. Cloud State had to play at last-place Western Michigan.

The term “first place” and “last place” are interchangeable in the NCHC, where every game is like a playoff game, and there is no such thing as an upset. Maybe you overlooked it, but while UMD’s series at Miami was postponed because of COVID-19 protocol, the Huskies were beaten 6-2 and 3-1 for a sweep at Western Michigan’s hands. That knocked the Huskies out of first place, and lifted the Broncos up from last place.

This weekend, UMD tries again, on home ice, with Western Michigan coming to AMSOIL Arena. Instead of playing Friday-Saturday, as scheduled, the games will be Saturday night and Sunday at 4 p.m. The same old story in the NCHC, though, that every game is like a playoff game and if a team doesn’t play its best, it is in trouble.

In the WCHA, Minnesota State Mankato is making another strong run at national honors, as coach Mike Hastings has his Mavericks in first place at 4-0, although Michigan Tech 2-0) and Bowling Green (3-0) also haven’t lost. 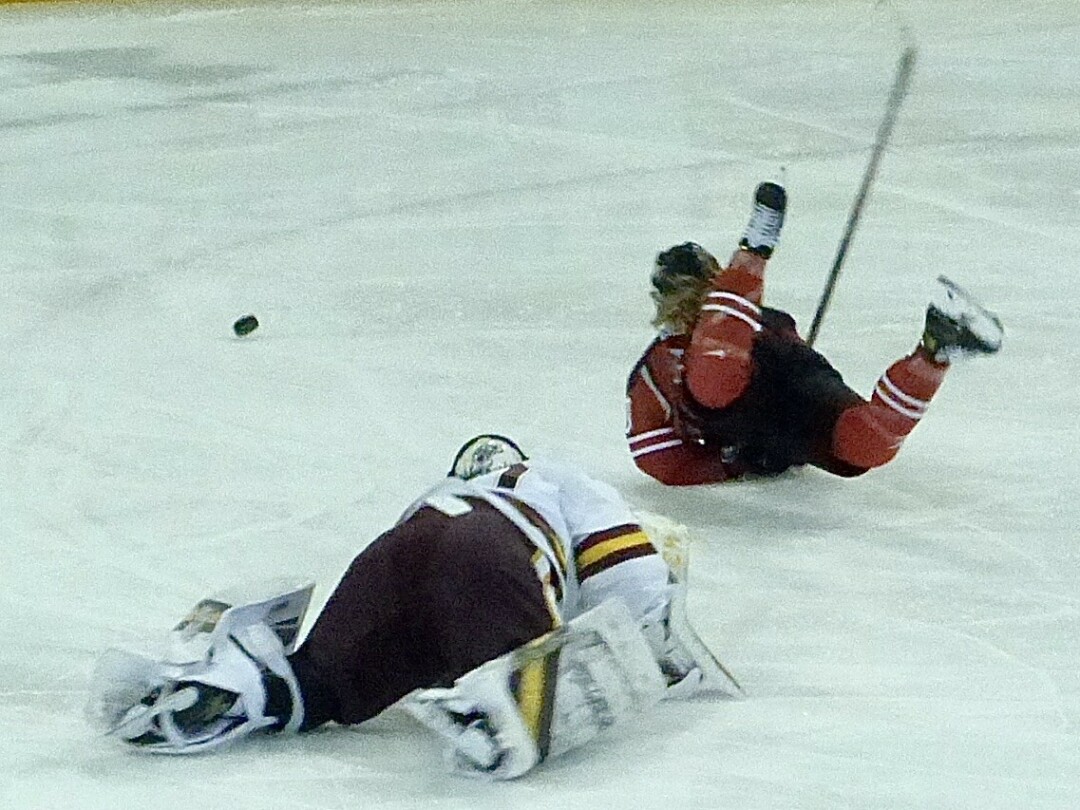 UMD goalie Emma Soderberg hustled out of the net to block the puck and send Ohio State’s Jenna Buglioni flying.

The Big 10 Conference had a shining light with Minnesota starting out 10-0, and 8-0 in conference games. But splitting at Wisconsin, and then getting shocked by Notre Dame, 3-2 and 2-1 at Mariucci Arena means the once-10-0 Gophers have lost three of their last four and the bible has burst.

On the women’s side, it’s just as crazy. Ohio State swept at No. 1 Wisconsin two weeks ago to rise to No. 3, knocking Wisconsin to No. 2 nationally while Minnesota claimed No. 1. But last weekend, Minnesota went to Wisconsin for a heavyweight series, and the Badgers spanked the Gophers 5-0 and 6-3. That allowed the Badgers to reclaim No. 1 and dropped Minnesota to No. 1.

Ohio State came to Duluth, and Emma Soderberg shut out the Buckeyes for a 2-0 UMD victory. The next day, the Buckeyes came out strong and put the pressure on there Bulldogs from the start, but again Soderberg was outstanding, and the game stood 0-0 until 1:18 remained in there second period.

One puck got away, and not really away, but loose by the left pipe late in the second period, and Brooke Bink squeezed it inside the pipe for a goal. Andrea Braendli stopped all 32 UMD shots, and Bink’s goal was all there was to show for 45 shots, as Soderberg stopped 44 of them and played even better than in the first-game shutout.

The split is impressive for UMD, especially right after Ohio State swept at Wisconsin. But now the Bulldogs hit the road and have to fare well at Bemidji State to improve their status in the Women’s WCHA.

Then there’s the Wild. Still seeming unsettled as general manager Bill Guerin tries to reassemble a team comprised of as many ex-Pittsburgh players he can round up, the Wild got off to the most incredible start in anybody’s NHL memory.

Kaprizov, a 23-year-old flash who has that magical ability to ignite his team, had two assists in the opener, and after the Wild had come back from a 3-1 deficit, he won it 4-3 on a breakaway in overtime at Los Angeles. The reports were positively gushing, one remarking about what a great pass he had made when actually he cut in sharply from right wing toward the slot, got upended and the puck slid off his stick — right to Matt Dumba for the tying goal. In overtime, he lunged at a momentarily bobbled puck at center ice and broke in clean, at full speed. He made two or three quick dekes, and when he made a final move to his backhand, the left-handed shooter mishandle the puck at point-blank range, and it bounced off his skate and skittered between goaltender Jonathan Quick’s legs for the victory. He listened to the breathless interviewers and simply said, it wasn’t what he tried to do, but it went in.

In the next game, also against the Kings, the Wild also got behind 3-1. This was one for the team, as the Wild battled to cut it to 3-2, then, with goaltender Cam Talbot on the bench for a sixth attacker, the clock ticked down through the final minute, then the final 10 seconds. I know guy who got up from his television seat with five seconds to go and left the room to take a shower. When he got out of the shower, he found out the Wild had won 4-3 and he had missed it!

The Wild moved the puck back to the blue line to Suter, who calmly cut loose with a big slap shot at the clock hit 0:02, and it went in, imperceptibly tipped by Dumba, and the Wild had tied the game 3-3. This time, after great chances at both ends in overtime, Kaprizov got the puck and raced toward the Kings goal — this time passing across, left-to-right, to Marcus Johansson, who one-timed a blast from the right circle that beat Quick and gave the Wild a 4-3 victory and a 2-0 start. 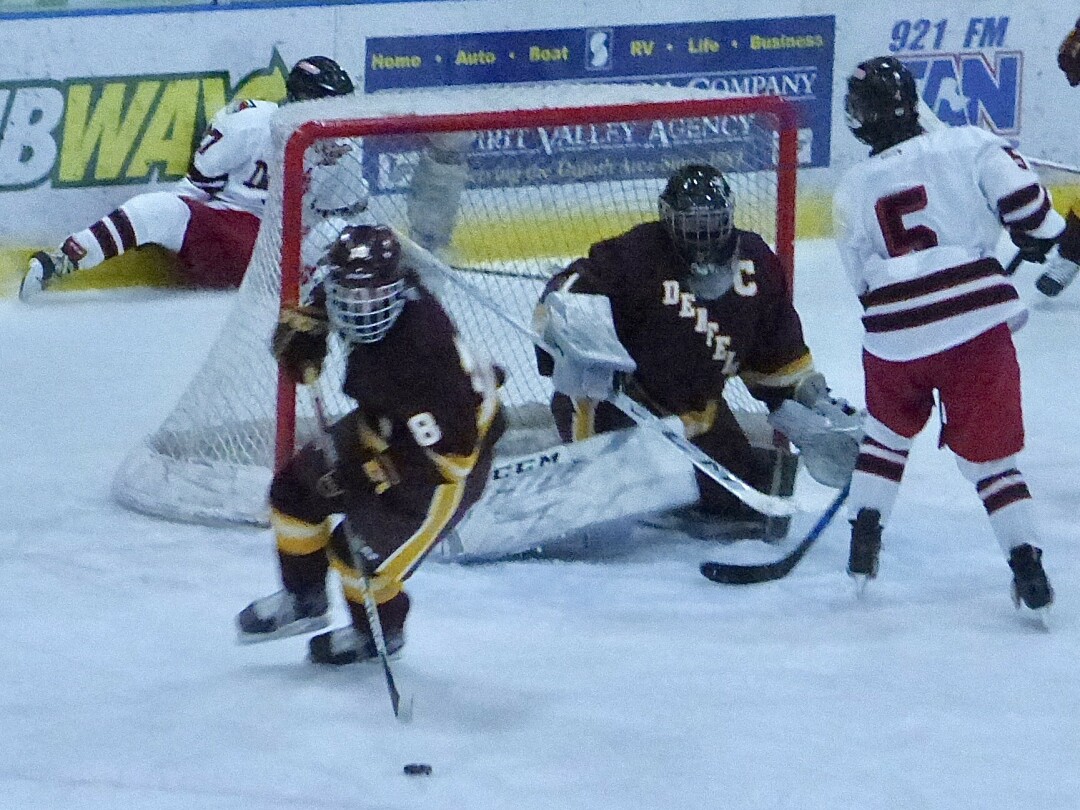 Denfeld goaltender Jacob Snyder made one of his 55 saves on East sophomore Cold Christian (5) as Cooper McClure (8) escapes with the rebound in the 4-4 tie at Heritage Center.

It couldn’t last forever, of course, and the Wild was stopped in their tracks in yet another nail-biter, losing 1-0 to the Anaheim Ducks, a team that had been winless and who the Wild had to play again Wednesday night.

The Wild come home to Excel Center this weekend, for games Friday and Sunday against the San Jose Sharks before the Kings come to Minnesota for two more. It is a wild and weird season, but if the Wild can keep up the pace, they have the young legs to force play and overrun some teams in the third period of these games.

The other attraction we’ve all been waiting for is high school hockey, and the season got off to a sizzling first week. Duluth East is still in rebuilding mode and faced an aroused Denfeld outfit in their opener, at Heritage Center. East came out and jumped ahead with an early goal, then gave one up to Denfeld, before taking a 3-1 lead. The always tenacious Hunters scored twice midway through the second period to tie the game 3-3, and scored again to open the third for a 4-3 lead.

The history between these two teams is that East’s depth and manpower wears down the Hunters, but not this year. This time the Greyhounds had to do the coming back, and sophomore defenseman Grant Winkler scored his second goal of the game on a Kamikazee charge to the net at 3:50 of the third period to tie the game 4-4. From there, they battled scorelessly the rest of regulation and through an 8-minute overtime. East outshot Denfeld 59-33, but the game ended 4-4.

Some big disappointments in the NFL playoffs, from my viewpoint. I was really pulling for New Orleans to get the first Super Bowl title in Drew Brees’s long career, but he got battered by the Tampa Bay defense, and the Bucs and Tom Brady won 30-20 in the NFC semifinals. Brady is magnificent, but I’ve seen him win too many titles with the Patriots; I don’t have to see him also win in Tampa Bay.

Tampa Bay now goes to Green Bay, where Aaron Rodgers and the Packers whipped the Los Angeles Rams 32-18 in a game that was anticlimactic. On the AFC side, the Buffalo Bills are my last remaining pick, and they defeated the Baltimore Ravens 17-3 and now get the chance to go to Kansas City for the AFC title game, and we have no idea what’s up in that game.

Cleveland, the perfect Cinderella team, didn’t get going until too late, then after a hit on the field knocked KC star quarterback Pat Mahomes out of the game, the Browns couldn’t quite get over the hump and fell 23-17. If Mahomes comes back, as expected, the Chiefs will be favored to advance to defend their Super Bowl victory from a year ago. He was not up to his superstar billing against Cleveland, but the Chiefs won anyway.

I think the Packers, at home, will beat Tampa Bay, but this game really is a toss-up and should be a great feature between Rodgers and Brady. I also think Kansas City will be favored, but I like the Buffalo Bills to ride the team of destiny horse to another victory.