Leave it to Psmith by P.G. Wodehouse 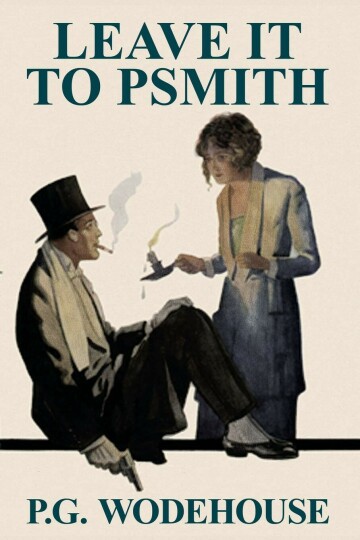 Master of metaphor, Sultan of simile, Wodehouse is recognized as one of the greatest writers of the English language. Bertie Wooster, one of his most famous creations, often ran afoul of his Aunt Agatha, observing that the sound of Aunt calling to Aunt was like mastodons bellowing over the primeval swamp. A frequent subject in his stories, Sir Roderick Glossop, who was himself a blister on the Hide of Humanity, has a daughter Honaria, whose laugh sounds like cavalry crossing a tin bridge.

Recurring characters in Wodehouse’s stories are as comfortable as your favorite pair of socks. The mention of their names revives pleasant memories of when we last met, and tells you something of what to expect this time around.

In this book, we are introduced to Psmith (the p is silent, as in pshrimp), and I believe the second appearance of the denizens of Blandings Castle, who will appear in many more stories until Wodehouse’s last and sadly unfinished book, “Sunset at Blandings.”

Psmith is another member of a recently impoverished family. His uncle the fish magnate thought he might train him as his heir to the business, starting from the bottom up, but he finds working with fish disgusting and is currently looking for employment.

He is a member of the Drones Club, another common Wodehouse element. The Drones Club is made up of younger men, most of whom live on allowances from their elderly relatives. They are a frivolous group, given to games of chance, such as betting on sports like the Mother’s Sack Race or more esoteric things like who has the fattest uncle. Standing in the window looking across the street, he spots a beautiful girl getting rained on. Eve Halliday has no umbrella, nor has he, so he gets the best one he can find in the Drones Club cloakroom, and brings it to her.

Blandings Castle is the seat of Clarence Threepwood, 9th Earl of Emsworth, and home to various relatives, employees and invited guests. His elder son Galahad once caroused with members of the peerage in their younger, more frivolous days, and worse, remembers them when he threatens to write his memoirs. His youngest son Freddie is still a blot on the family’s escutcheon, and is addicted to proposing marriage to a succession of girls who strike his fancy.

In this book, Lord Emsworth is obsessed with his flowers. In later stories, Lady Constance will wish he was still puttering around in the flower beds rather than mucking about in the pigsty where he keeps his Championship sow, The Empress of Blandings.

The Lady Constance in this story is a middle-aged, happily married woman, but you would be ill-advised to expect her to remain happy. She is ordinarily the person in charge of the castle, and even her brother Clarence walks softly around her. Her husband, Joe Keeble, had made his money in South African diamonds, and had foolishly, while on their honeymoon, agreed to pool their fortunes, for which Lady Constance now owned the only key.

Joe has a stepdaughter on whom he dotes. Constance at first took Phyllis under her wing, and found what she thought was a suitable husband for her, but Phyllis had turned down that prospect, and had married a man Constance thought was far beneath her station. As a result, she is denied any help, and is living in abject poverty, which in Wodehouse’s world means she has to make do with only one maid, who has to both answer the door, and serve tea.

Lady Constance is intent on exposing her family to the arts, and therefore has taken to inviting musicians and poets to stay at the castle and provide education and entertainment. Lord Emsworth, who can best be described as oblivious, is charged with meeting a Canadian poet, Ralston McTodd, in London, and escorting him back to Blandings. Emsworth, obsessed with his flowers, would much rather stay and argue with his Scottish head gardener, Angus McAllister, but with the help of his annoying secretary, the Efficient Baxter, he is hustled onto the train.

He meets the poet at The Senior Conservative club, but promptly forgets about him when he spots a new florist’s shop across the street. The poet leaves in a huff, and his place is taken by Psmith. Psmith is a paid up member of this club also, but opted to abandon the Drones Club for the moment, because he wished to think, and did not want to be interrupted by a well-aimed biscuit while he ate.

When it turns out that Eve Halliday is also on her way to Blandings, Psmith decides to continue on as McTodd the poet. Oddly enough, he is also involved in a scheme with Freddie Threepwood to help Joe Keeble’s daughter Phyllis, which requires the theft of Lady Constance’s diamond necklace. One introduction to Blandings is that it seems to always be filled with imposters and thieves, and this story is no exception. Psmith is forced to identify one of those thieves to Beach, the dyspeptic butler, as his valet.

By the time we come to the hilarious conclusion, you will know why the Efficient Baxter stood in his lemon-colored pajamas throwing flower pots through his employer’s bedroom window at 4 AM, although Lord Emsworth will never understand it.

When someone wants to praise a writer of a comic novel, he will say, “He writes similes like Douglas Adams.” Adams, in his introduction to Wodehouse’s unfinished book “Sunset at Blandings,” credits Wodehouse with being at the top rank of English literature because of the mastery of the language. He puts Wodehouse in the company of Milton and Chaucer, and says that William Shakespeare might be considered England’s greatest, but he was never able to write a joke.