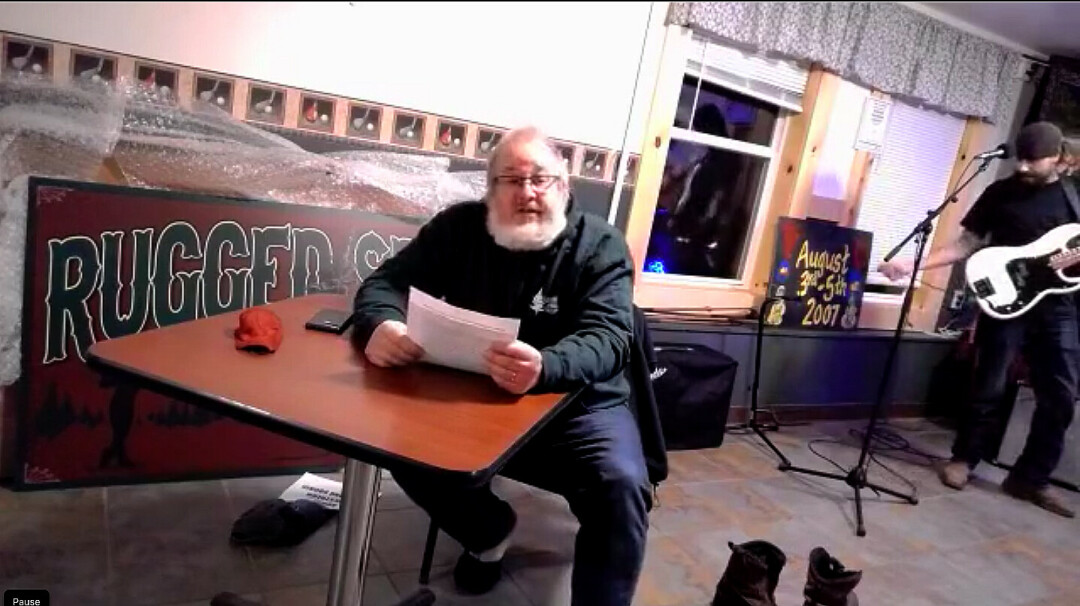 The ‘rona has drastically reduced the bars, coffeehouses and small stages available for musicians. Many artists have taken to performing online from their living rooms, but precious few venues offer a platform.

The Rugged Spruce Golf Course in Mahtowa began sponsoring shows on their Facebook page in December and have gone weekly, with new music every Thursday at 7 p.m.

So far there have been regional musicians Nathan Frazer, Blackhoof, the Minorbirds, and, naturally, Rugged Pines co-owner Colleen Myhre, who performs under the name Boss Mama. Future acts include Sonofmel, Shannon Murray, Sonja Martin and The Langerstons.

The shows typically open as a Mr. Rogers parody. Jim Myhre, Rugged Spruce co-owner and Colleen’s husband, talks about what’s happening at the Spruce while he takes off his boots and Colleen throws him his slippers one at a time. (“No, that was the wrong one,” he invariably says and tosses it back.)

After the Capitol siege in Washington D.C. he started giving impassioned speeches on national unity and managed to keep the politics nonpartisan. “It was difficult to take the high road,” he said.

Many of their business neighbors in Mahtowa are staunch Republicans, on the opposite side of the political spectrum from the Myhres. But they’ve also been highly supportive of the new course owners.

At the end of Jim’s Jan. 14 speech, the subject turned slightly askew: “We bow down in this historic moment in time and accept our faults and shortcomings. We cease our anger, disappointment and shame and cast it into the abyss. And we hereby declare that we accept the results of the NFL North Division as we publicly announce and share humility that we will, in fact, show the Packers playoff game in our clubhouse Saturday.”

He then donned a Packers hat, raised a fist and yelled, “Skol, Vikings nation, skol!” (Colleen tossed away the hat, saying, “No, no, no.”)

The Myhres bought the course last September. Originally it was the 29 Pines Golf Course, which opened in 1976 and closed in July 2020. They changed the name to avoid confusion with Pine Hill Golf Course in Carlton. 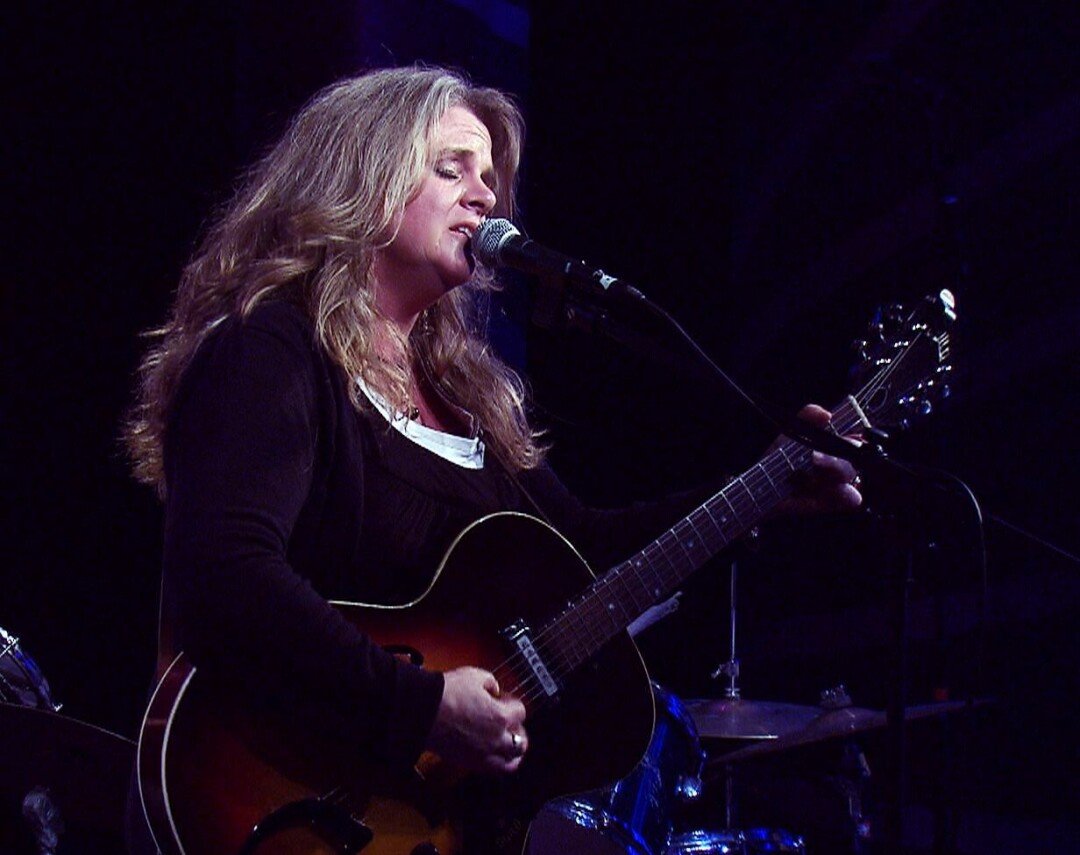 Jim was retiring from his career as a case manager at Moose Lake Correctional Facility. “I needed something to do in the next 10 years and my wife said she always saw me working on a golf course,” he said. “I love to play, but I’m not real good at it.”

Working on the golf course hasn’t allowed much time to practice, as there’s been the steep learning curve, such as 15-hour days mowing and dealing with crises like black mold on the green.

Being an outdoor activity, golf has weathered the coronavirus better than many other businesses. Still the Myhres needed activity in the winter to stay solvent, so they provide outdoor food and beverage service to snowmobilers.

The decision to add music was logical since Colleen is a longtime musician. She often performs with her band The Jebberhooch, a varying collection of area musicians that includes Jacob and Owen Mahon and Jeff “Quick Draw” Gilbertson.

Jim is well known as a music patron since he was a founder of the popular Highway 61 Folks Festival, which took place every summer in Mahtowa from 2002 to 2009. Trampled by Turtles played the festival in 2005, filling in at the last moment when another band canceled.

The Myhres knew where to find the musicians, but there was another learning curve as they knew nothing about livestreaming. The technical hassles lost them viewers on at least one occasion, but otherwise the roughness is part of the charm. “With technology and my lack of expertise, we can make mistakes and feel good about it,” Jim said. There’s always a virtual tip jar to support the musicians.

The clubhouse is open for snowmobilers Friday through Sunday, so Thursdays are a convenient time for the music shows. They now have musical acts booked until May, at which point they’ll focus on reopening the golf course for the season.

Still Jim plans a music festival this summer. “It’s gonna happen. I don’t know how and when with golf balls flying all around.”

All shows are Thursdays, 7 p.m. at facebook.com/TheRuggedSpruceGolfClub. 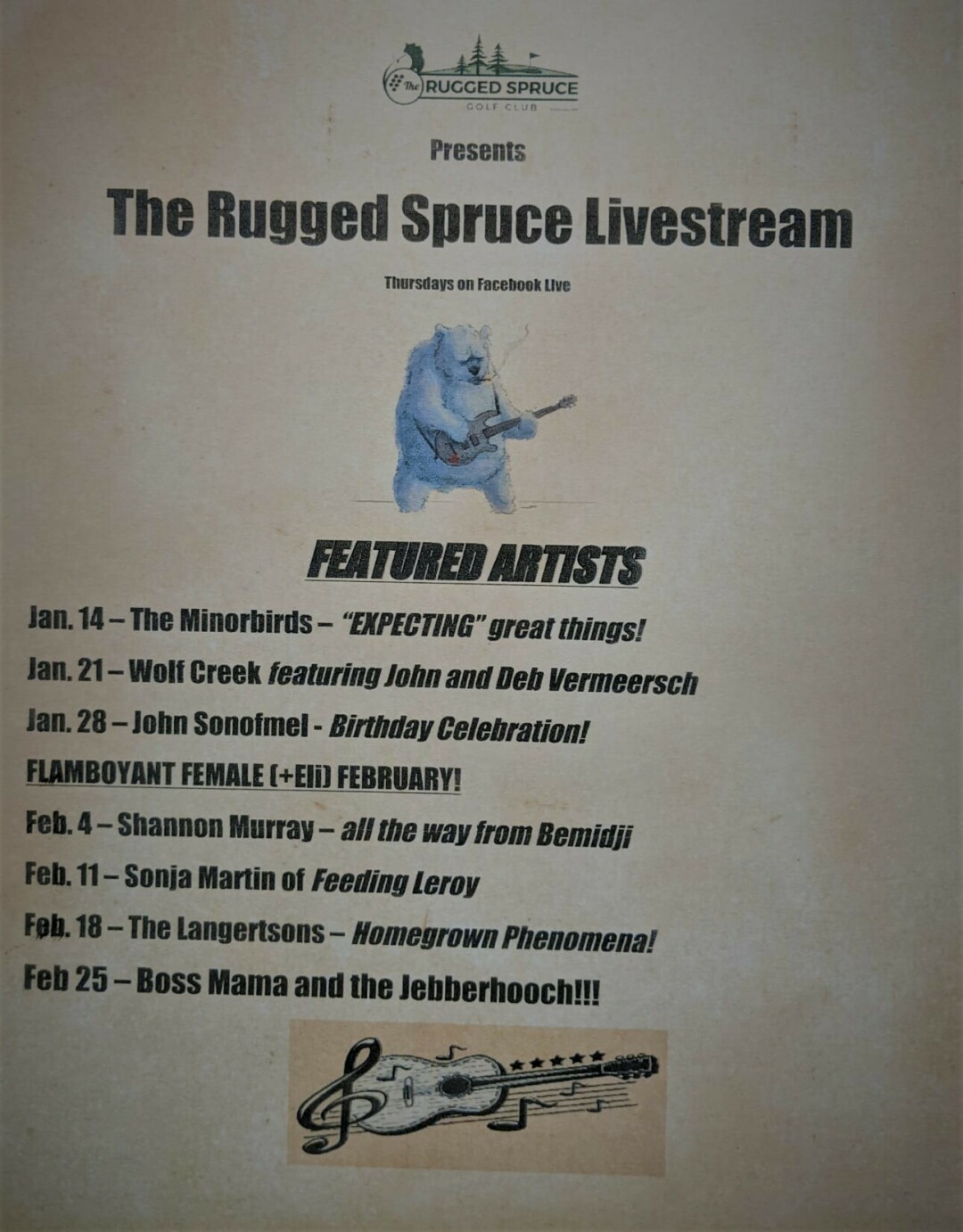