Send your My Pillows to Trump 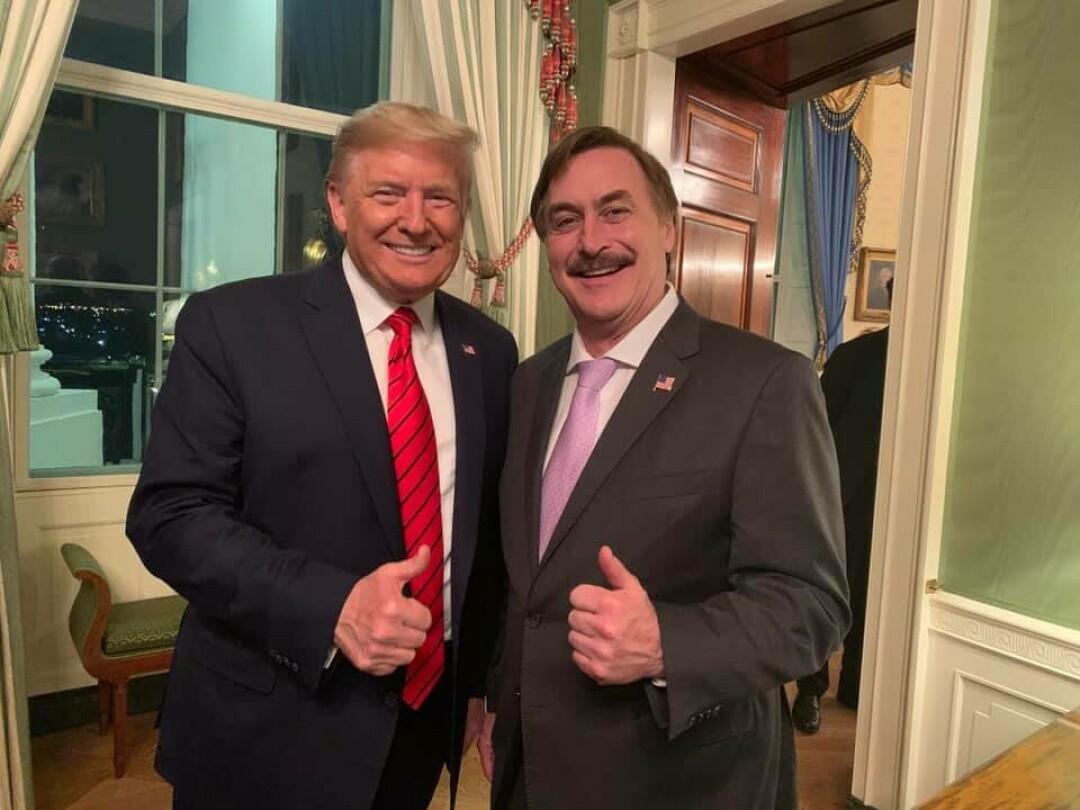 Do you wake up feeling tired in the morning?

If you’re pillow king Mike Lindell, maybe you’ve had too many sleepless nights plotting a military coup for the disgraced President who shamelessly shilled your pillows while in office.

The well-known bromance between Lindell and the criminal Trump was apparently put to the test last week when the My Pillow entrepreneur was photographed at the White House with notes alluding to a military takeover to keep Trump in power. Lindell continues to insist the election was stolen from Trump in the “biggest election fraud in human history.” The world continues to wait for the definitive proof he claims to possess.

The delusional pillow hawker with headquarters in Chaska, Minn., also claims to have a conduit to inside information. “God’s got his hands in all this and all this stuff will be revealed,” he told an interviewer with Right-Side Broadcasting News.

According to other reports, Lindell was an obnoxious White House visitor who even irritated the much-abused Trump inner circle.

As Maggie Haberman of the New York Times wrote of Lindell’s West Wing visit, “Officials said Lindell spoke sharply to one of (White House Counsel Pat) Cipollone’s assistants after he was brought upstairs; Cipollone told him he wouldn’t speak to him until Lindell apologized to her.”
Makes sense that one arrogant prick would be BFF with another.

This is the same guy who last summer was promoting an untested and highly toxic botanical called oleandrin as a remedy for COVID-19, while having a financial stake in Phoenix Biotechnology, the company making the oleandrin compound.

When appearing on CNN with anchor Anderson Cooper, Lindell invoked Jesus as the reason for promoting an untested and potentially lethal substance.

“You really are like a snake oil salesman,” Cooper said to Lindell. “You could be, in the Old West, standing on a box, telling people to drink your amazing elixir, [but] there’s no proof.”

“I do what Jesus has me do. I give the glory to God,” Lindell said. “I want to help people. That’s my passion.”

He then made the mistake of asking Cooper why else he would put his reputation on the line by promoting this stuff.

This nut’s support of a man who never should have been elected to public office in the first place should be met with revolt from true Americans.

If you own a My Pillow or any of the assorted bedding products made by this crazy man, get rid of them now.

There have been rumors that Lindell is ready to run for governor of Minnesota, with support from state Republicans. In September, Republican Party of Minnesota Chair Jennifer Carnahan said they planned “to make him our next governor.”

Time to nip that in the bud now. This guy is a stain on Minnesota, just as his pal about to leave the White House has left a stain on America.

If you are one of those thrifty people who plan to use a single pillow for your entire life, consider this: the National Sleep Foundation recommends you replace your pillow every one to two years to get rid of the accumulated saliva, skin oils, makeup, dead skin cells, dust mites and even mold. Think about that for a moment. Maybe it will help you get rid of that disgusting My Pillow.

It would be epic to have a giant bonfire of My Pillows, but who knows what’s in the chopped up foam he uses to inflate his pillows? That seems like an ecological nightmare.

Just throwing them away means they end up in a landfill.

How about sending them to ex-President Trump’s post-White House home in Florida. He loves them so much. Let him have them all. It will give him something to do in his lonely exile from civilized society.