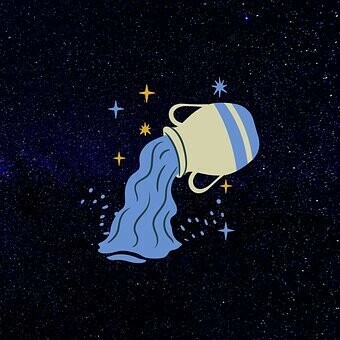 “Yay! Happy New Year everyone,” you enthusiastically state – as the Aquarian rolls their eyes and sniffs.

The Aquarian’s idea of a New Year’s resolution is to correct YOU on all of YOUR shortcomings. Heaven forbid there’s anything in need of improvement in their lives.

When the Aquarian finally does crack, and admits they MAYBE are a bit hostile and cruel, the floodgates open, and you are forced to listen to a non-stop tirade of their cathartic rebirth. They will post it on all the social media sites, send letters out to their immediate family, and basically irritate the hell out of everyone else who’s just trying to follow their resolutions of limiting their alcohol intake to 6 drinks a day, or not go to fast food places twice daily. You get the drift.

The Aquarian is selfish without knowing it, pompous without admitting it, and basically an asshole.
They would say otherwise, of course, citing their many attributes and ac-complishments, as if telling you how they dissed a family member, or stole extra food from their friend’s plate is somehow a feather in their cap.

Don’t get me wrong. I have Aquarian friends. I kinda dig em.

They are fearless, opinionated and forthright.

They also are secretive and shallow.

They will lie without any sense of remorse.

You can bet they will “tweak” an experience they had just to make the retelling of the story spicier and more interesting. Even then (loving the sound of their own voice) they will ramble on and manage to bore you into the depths of despair.

They will come across spontaneous and bright, all the while being calculating and decisive.
Make no mistake. Your Aquarian isn’t a big fluffy fuzz ball. They are a Brillo pad, waiting to scratch the shit out of you at a moment’s notice.

When everything in your life is going along nicely, your Aquarian will suddenly and unrepentantly slice you to pieces with a stinging “observation” on your behavior or appearance. Telling you openly that they have “tolerated” you long enough. You stand there stunned, racking your memory for any sign or signal or clue that ever came from them about your so called “offense.” It’s OK. They will praise you later on in the day for listening to their advice. After all, they know everything, right?

Basically, they don’t play well with others. They will openly admit that. Go ahead, ask them.
Even so, they struggle to make a difference in the world, to SAVE humanity. They just would like to take all the credit for it.

They are the ones who donate to charities and playhouses and theaters and hospitals. They also are the ones that insist on a bronze plaque with their name on it publicly displayed for all to see their amazing generosity.

The sign of Aquarius is a fixed AIR sign. There is a rigidity to their mindset. They are very self-controlled, and are often embarrassed by displays of emotion. This is a characteristic of AIR signs, creative thinkers with rods up their asses.

If you love an Aquarian, be prepared for hot and cold responses. Some days (when they need you for their fan club) they will be amazingly tender and funny and almost (dare I say it) sweet!

But wait a few hours, and you will get the cryptic, caustic, bitter side of them. Try to hold on. They don’t even know they are doing it (yeah, right!).

It should be noted that most astronauts are Aquarian. SPACE suits them. Here are some noteworthy specimens:

Dark side of an Aquarian: You are cold and standoffish to your family, and kind and forgiving to your drinking buddies, because they make you feel superior to them.

You signal your contrariness by dressing in eccentric clothes to ensure that we all recognize your fascinating “otherness.”

These types of Aquarians usually “HIVE” together in places like Portland or Seattle or Duluth, thus creating a gigantic flux in the time-space continuum; while in social settings these Aquarians seem to always be in the center commanding attention by talking about cool stuff they want everyone to think they know about.

It’s not Bull with an Aquarian, though – highly intellectual and logical, at work you can figure out the operating system of any job in about ten seconds. Bosses hate you, because they know you could do their job in your sleep. Colleagues are awed by your insolent independence, but get upset when they come across the notebook listing all their quirks, catchphrases, and secrets they told you in confidence, because you seemed so nice and friendly.

Aliens kidnap Aquarians more than any other sign, since the Aquarian acts like the authority “go to” on subjects they know little or nothing about –confusing snatches of conversations they heard a year ago on the History channel’s Ancient Aliens with inter-actions they had with a famous sci-entist or expert on extra-terrestrial teleportation. The sad part is, they believe their own fantasy. So, not only a phony, but also a fruitcake.

Your never-ending quirkiness and incessant questioning are the reasons why you have no close friends, and your family members all live in other states. This is fine with you, because it gives you the opportunity to scope out the action on the Greyhound bus to Sedona. Besides, you love a captive audience, and the trip gives you an opportunity to entertain your newly found friends with your ability to play “Yankee Doodle” with your armpits.

Sorry to say, you are the most an-noying sign of the zodiac. You force family and friends alike to all-night speculations on whether the Catholic Church is a front for prostitution, global warming is caused by farting Bluejays, and licking stamps can cause brain damage.

In reality, you are actually the world’s most original thinker. You are sensible, friendly and idealistic.
Your fierce need for independence, however, can be a double-edged sword. Learn to overcome the urge to lay down the law, and spout ultimatums, before getting all the facts straight, and you’ll have the rest of the zodiac eating out of your hand.

In the meantime, as a verbal gunslinger, you are the fastest draw in the Universe!

Lady Ocalat is a Professional Astrologist, Reiki Master, Minister, Paranormal Investigator and Tarot Reader. She can be reached at 218-722-2240, or at Lady Ocalat’s Emporium in downtown Duluth.
ladyocalat.com
ladyoparanormal.com